There is nothing more annoying, more off-putting, or just plain obnoxious than an action figure that refuses to be fun and instead insists on being a contemptible piece of plastic that stares at you in complete defiance of all things toyetic. In these days of super-articulated action figures, our play-and-pose value has been enhanced to human-esque levels. These little avatars of the imagination have leapt off the pages and screens and into our own homemade worlds.

But sometimes they’re just plain rotten. Rotten to the core. There is, of course, good articulation and bad articulation. Bad articulation can present itself in many ways. I’ve chosen five figures that represent the many ways in which a figure can be killed by the choices made in articulation. 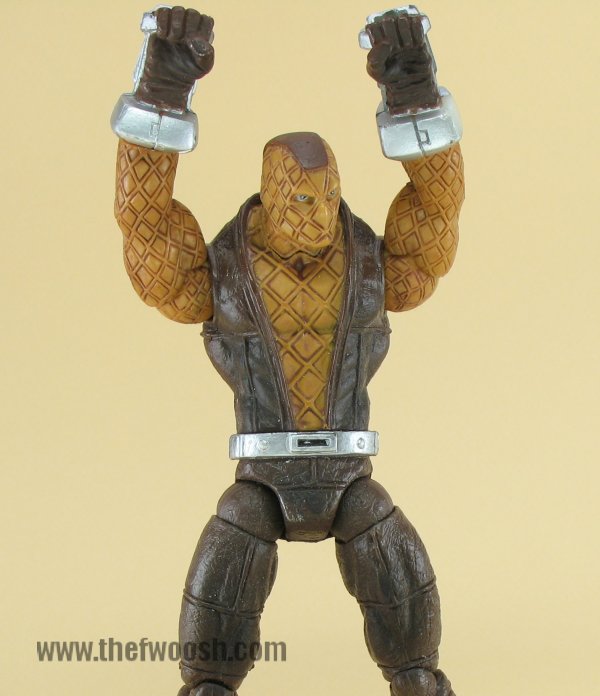 Though this is fifth on the list, in many ways this is the most egregious. Usually a toy in which the articulation has been hampered by the addition of some ridiculous action feature some so-called “adult” thinks will make the toy more palatable is 90 percent good. It’s just that last 10 percent that sucks monkey-nuggets. The Spider-Man Classics line suffered many times under this category. “It was a child’s line,” we adult collectors were told. Bah. Let the kids play with dirt and rocks and sticks if they want under-articulated toys. 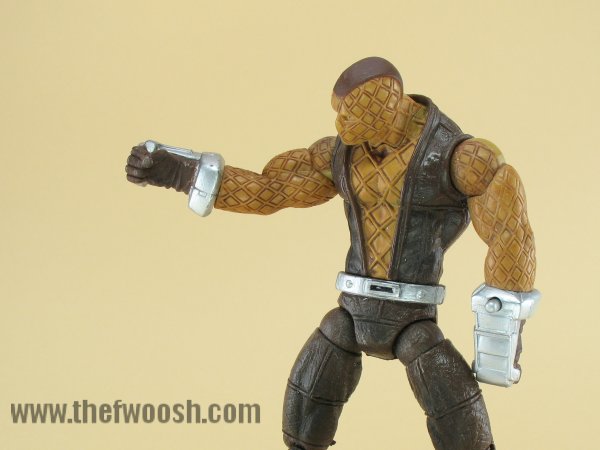 Shocker here represents how an action feature can ruin a toy that is almost a great one. How good would he have been if he had been able to move his elbows? “But he’s only ever posed like that anyway, what’s the difference?”

KNIFE TO THE EYE! 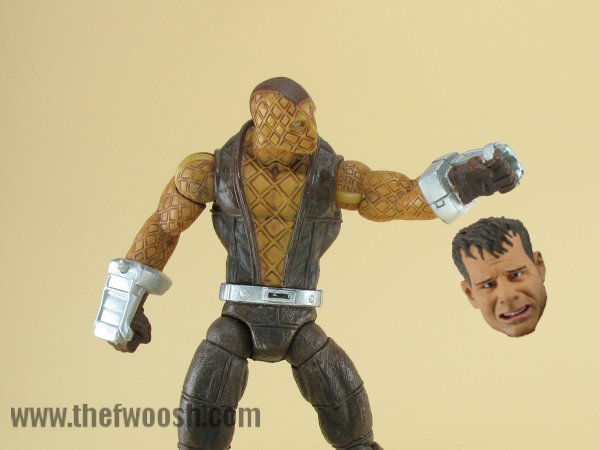 The point is that Shocker was a victim. A cruel victim of an unnecessary action feature that rendered him completely incapable of scratching his nose. I mean, my god, the man wears a mask all the time, his nose has to itch occasionally. Why do you think he bugs Spider-Man all the time? It’s not for the fun of it. He needs Spidey to punch him in the nose to scratch that itch because somebody decided he needed to shoot solid plastic darts that almost look like sperm cells if you squint. 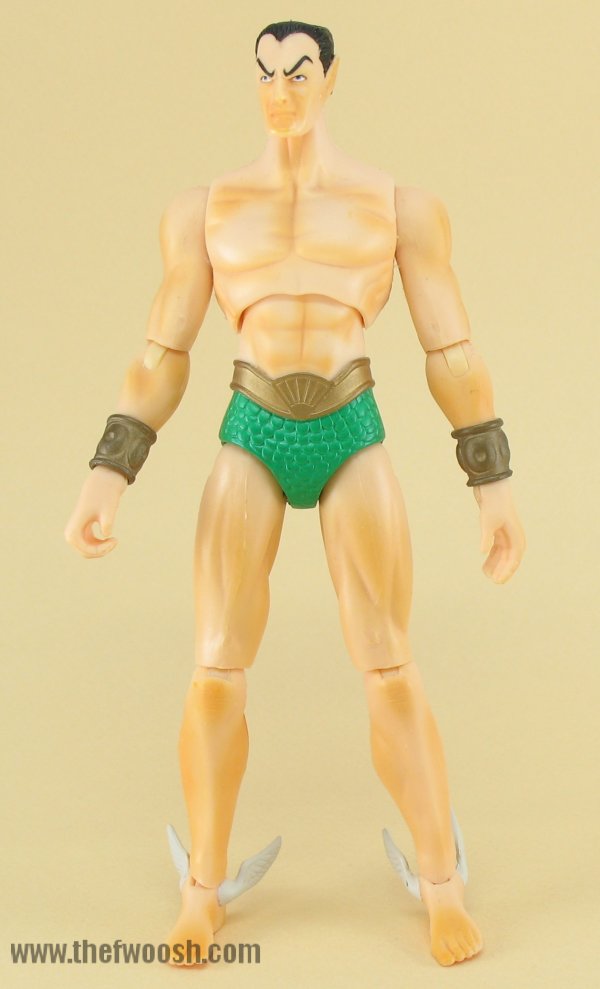 Good lord, what is going on here. Namor, you sad, sorry sack of seafood, you are horrible. 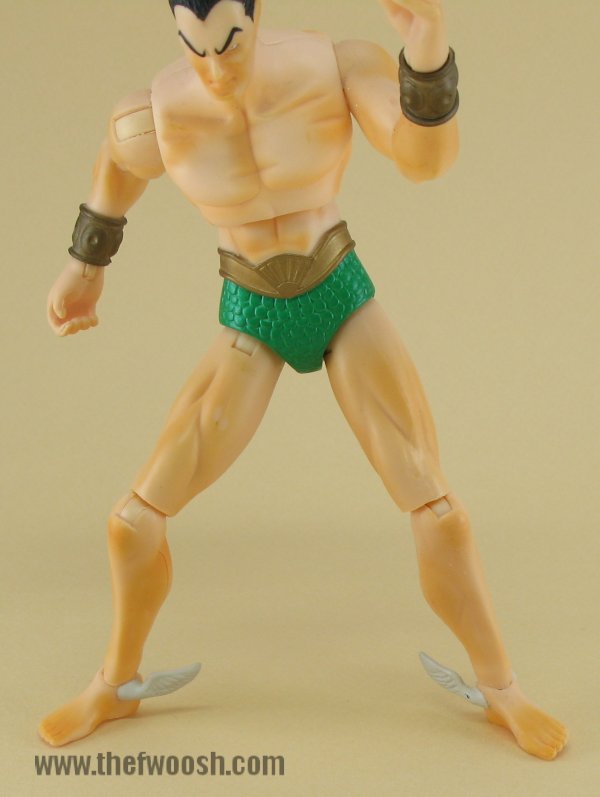 Back before Hasbro learned how to do 6-inch figures right (and they are a huge improvement from these bungles), they were pumping out figures, like Namor here, with the spinny joints at the elbow and knees that probably saved a lot on tooling costs, but rendered their action figures useless, grotesque mockeries of all that is good in the world. Namor was only one victim of this sad, sad scheme. Black Bolt and Adam Warlock were other victims of this atrocity. There were others as well; their names should be on some memorial somewhere. 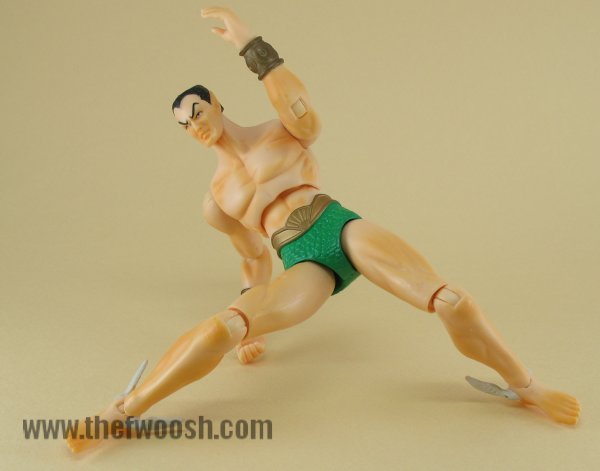 Now, I know I may be running the risk of being hypocritical when I praise a figure like NECA’s Dutch which has similar joints in the arms and legs, but at least they have the benefit of pants on the legs which hide the muscles. Namor is essentially a nude man, except for his funky scaled speedos. And though this is a much more anemic Namor than one would have hoped for, you can still see his extraordinarily basic musculature and how completely warped and twisted it is due to the Lamentation Box configuration of his articulation. Seriously, when I took these pictures, Pinhead showed up and dragged me to hell. That was not a fun weekend. Such sights, such sounds, such bad food. 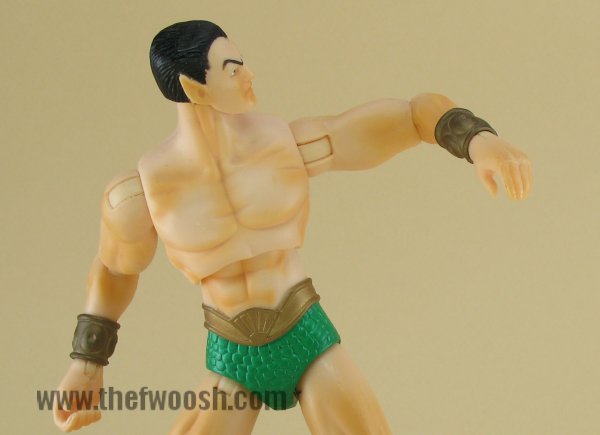 When articulation is this bad, it requires a complete redo of the offending figure just to wash the taste out of my eyes. Namor, Black Bolt, and Adam Warlock still languish in that purgatory. I won’t feel satisfied until each of these figures stricken with this abomination of an articulation scheme is redone with all the right joints where these things were. 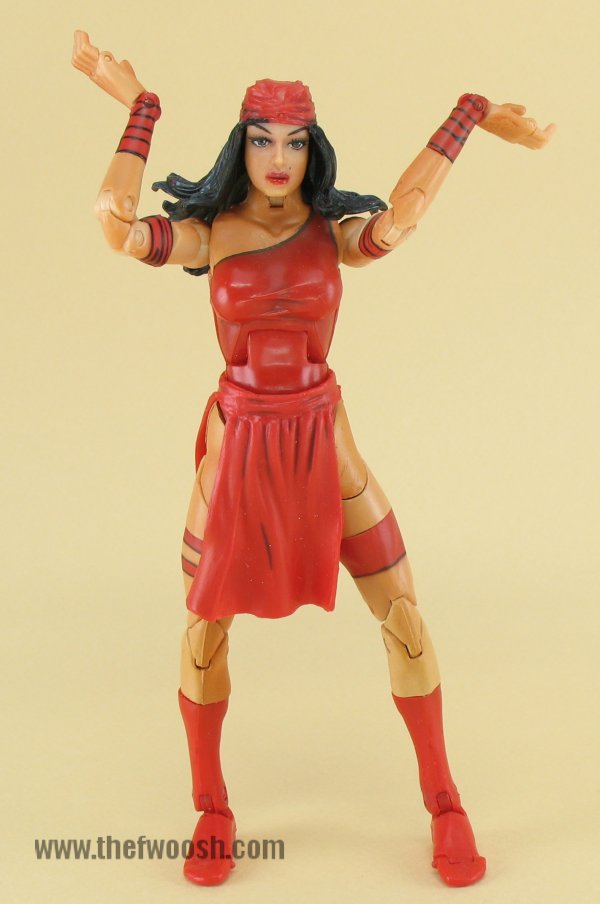 Good lord, did ToyBiz like their articulation. Remember those early packages? “Over 1,000 points of articulation!” Those early toys were more articulate than a meeting of the Former Stutterers of America. 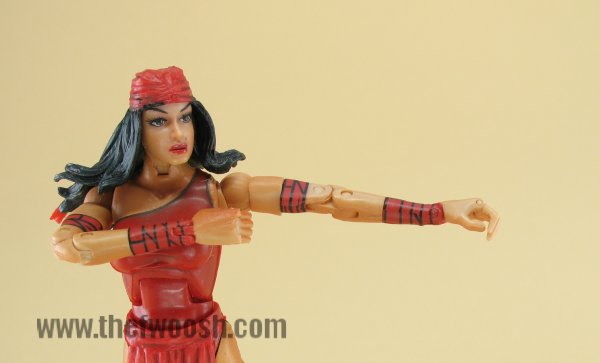 Early ToyBiz figures often suffered from a syndrome lovingly called “spinning meat.” No figure is more the poster child of this bizarre collection of misshapen cut joints than Elektra here. 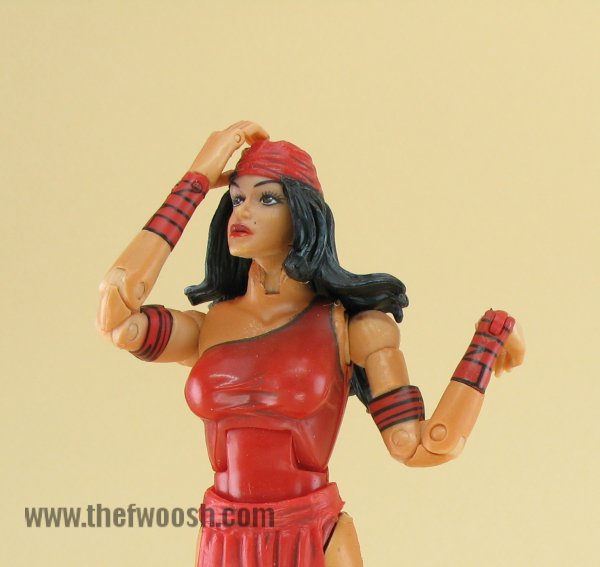 Arms are not supposed to bend that way. I haven’t seen this many joints in one place since the summer I opened for Cypress Hill.

But as overarticulated as her freakishly bony arms are, that’s not the reason she made this list. No, that is for one reason and one reason only: 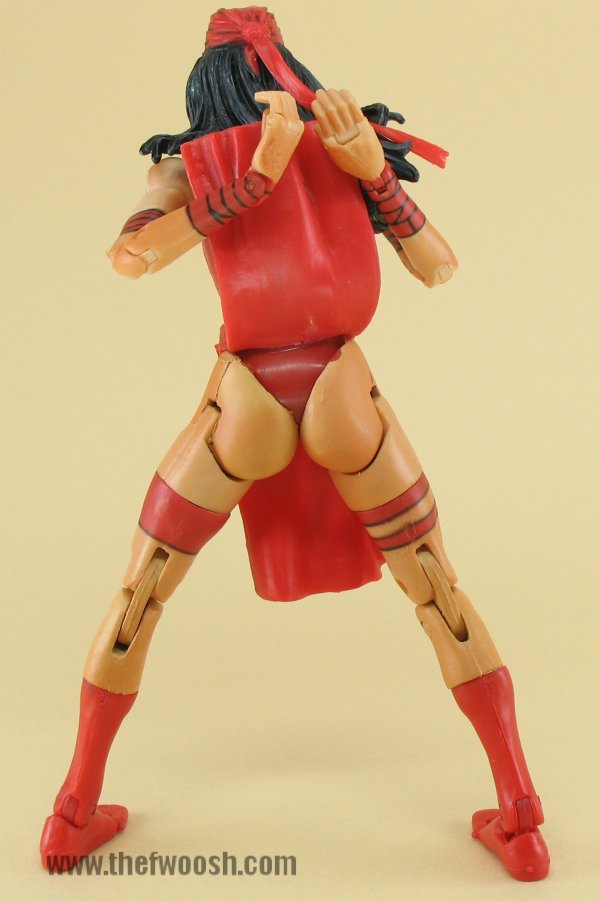 My god. Don’t look straight at it. It’s full of stars. 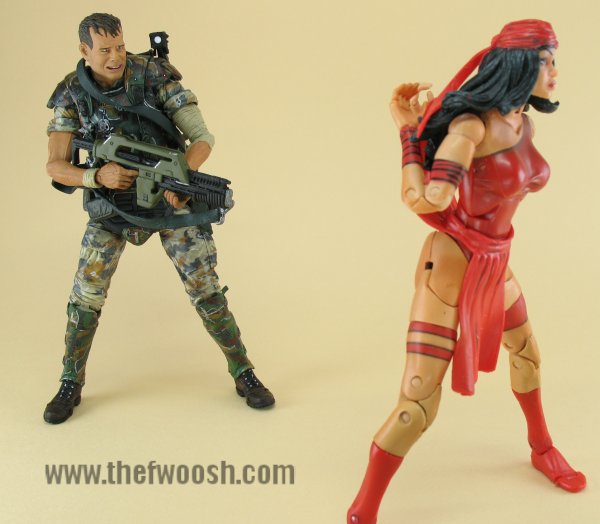 I don’t know what’s going on here. I think it wants to talk to me, to communicate in some way, but I just don’t know. I mean, independently moving buttcheeks may have at one point been the wave of the future, but looking back at them now I think it’s for the best that we eased off the throttle a little bit. It’s not like it did any good, she still had to resort to the Barbie-styled splits, so that ass wasn’t worth the price we had to pay, which is a lesson every schoolboy learns on the playground.

The toy company doesn’t play with their toys! 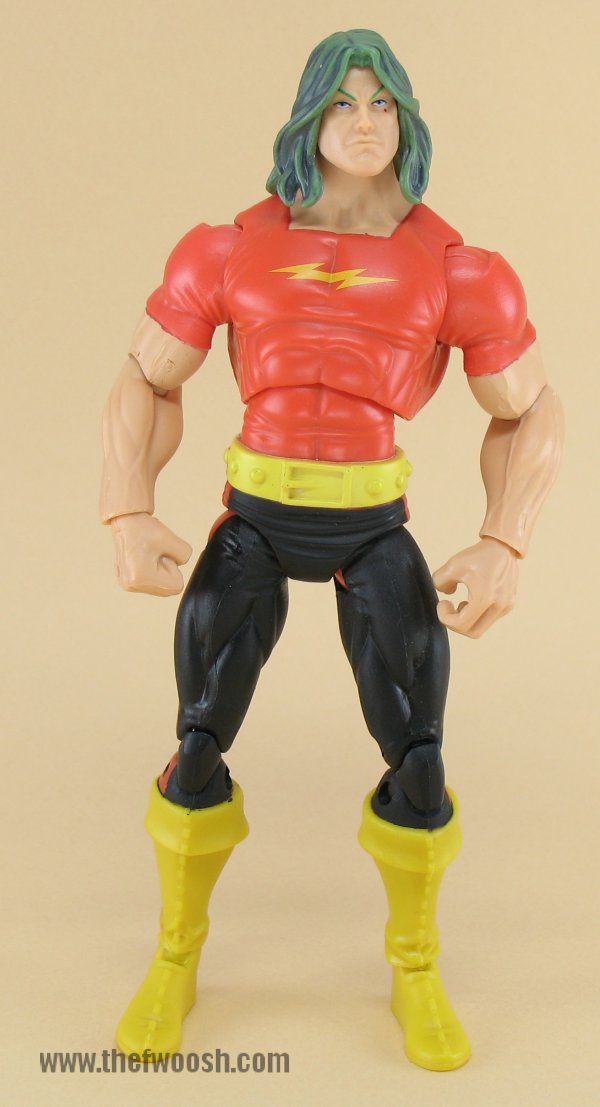 Speaking of Barbie splits, the number one, top shelf dumbest articulation is the one poor Gamma-irradiated Doctor Leonard Samson was afflicted with. 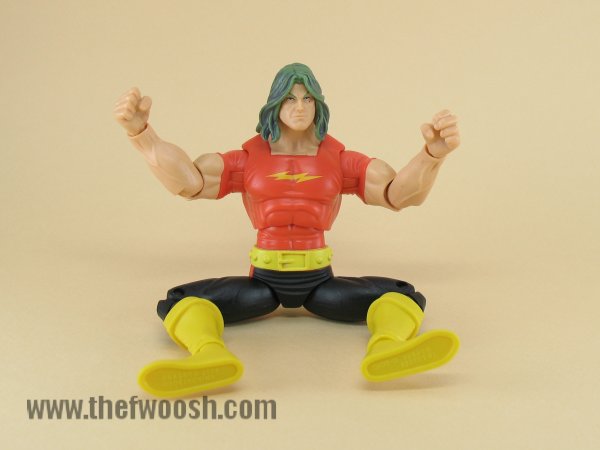 His 45 degree hips. No balls, no cut of any type… and double knee joints.
What the hell, man? Just… I mean… did you guys not play with him before pooping him out into the world? There is literally zero play value below the waist with him. Insert obvious joke. There’s only a handful of toys I actively want to punch, and this is one of them, because the only option is patty-cake. He literally can only play patty-cake. That’s what the guy who’s gone toe-to-toe with the Hulk is good for. Patty-cake. 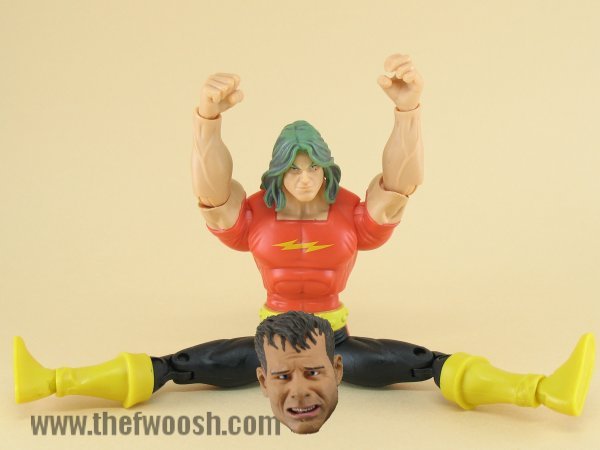 That sucks. Sucks even more because he was a figure I was really looking forward to, and he ended up being a contender for the Island of Misfit toys. Santa would be leaving him behind. This mold needs to be rocketed into space so it’s never used again.

Now, I know this fifth figure is pretty much covered in the last, but it’s such an egregious mistake to have made with Samson but it was made again, but this time with an even more unforgiveable figure:

The highly mobile character with the highly immobile toy! 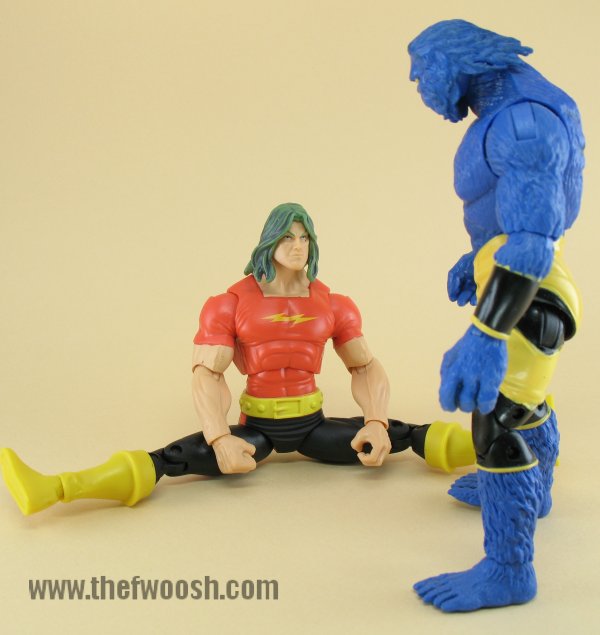 You’ve heard people say it all the time: “So and so’s not a ninja, I don’t need him to move like one.” 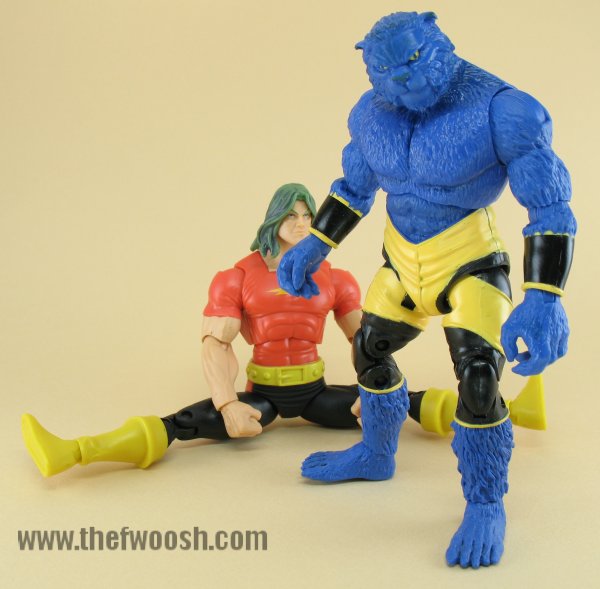 Yeah, that’s a stupid opinion. But you know who’s quite an agile fellow? Beast. He’s very agile. Mobile. Gymnastic, even.

So what was done to him?

Yep. One of the most highly agile and athletic characters was given one of the least-athletic schemes toy companies could come up with. It’s like releasing Spider-Man in a full-body cast. 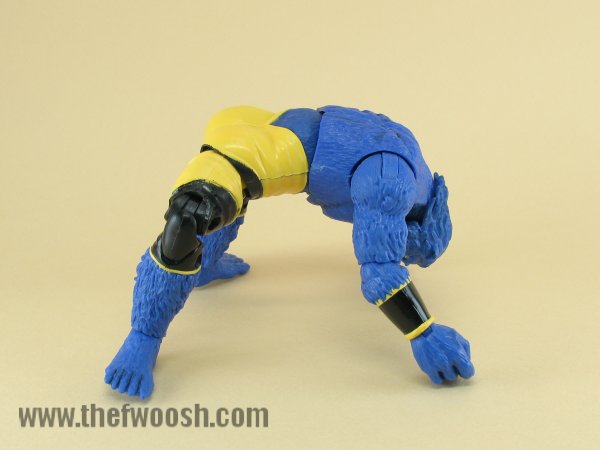 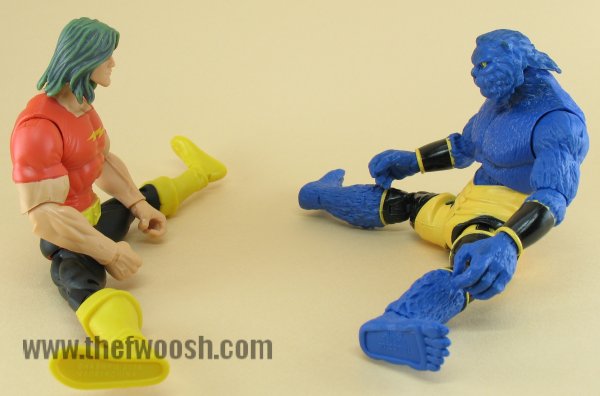 Or patty-cake with Leonard. 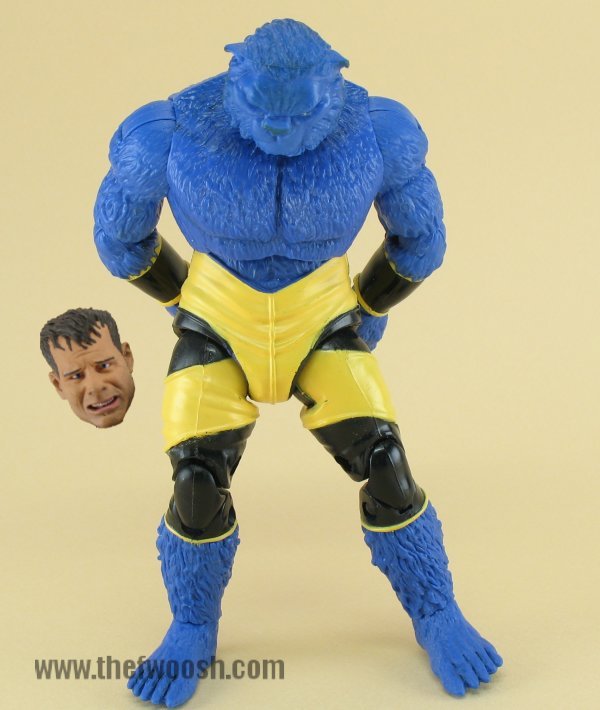 Hang your head low, Hank. You are not Astonishing at all.