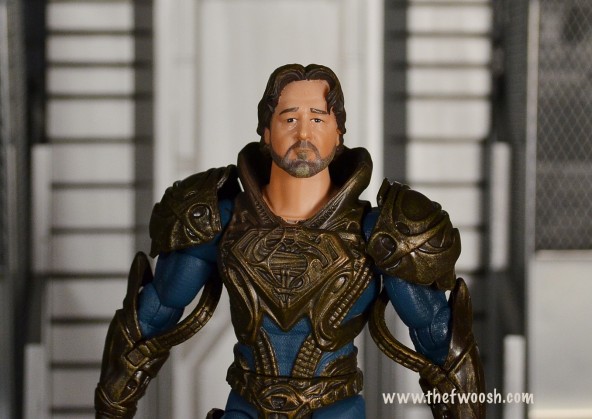 The movie hasn’t opened yet, but that hasn’t stopped me from snatching up these Man of Steel Movie Masters as quickly as I can. I wasn’t even on the market for these at all, having been whelmed-to-underwhelmed by the Dark Knight Movie Masters, but when I saw them in person, skipping them wasn’t an option anymore. The sculpts simply knocked my socks off. But, as I’m sure you’re aware by now, they are missing a key point of articulation: the ab crunch. Normally this would be a deal-breaker for a lot of people because leaving it out feels like such a giant step backwards, but each figure’s sculpt is really good, so it feels more like a trade-off than a step backward. Case in point: Jor-El’s sculpt is so good that it almost blinds me to his flaws. 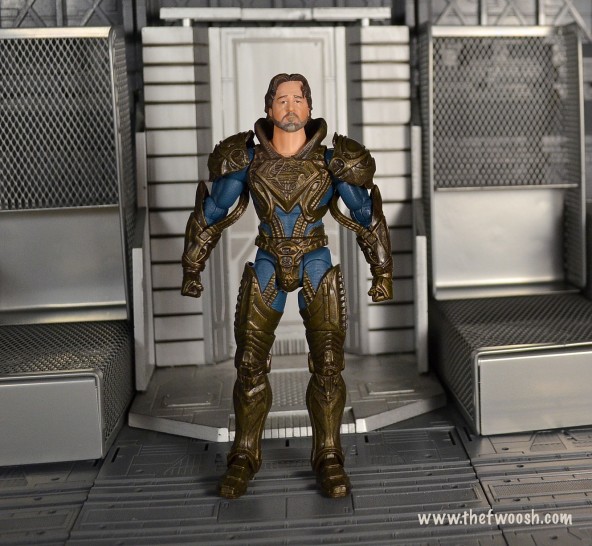 There are no two ways about it — this is a good-looking figure and the likeness to Russell Crowe is excellent for a six-inch figure. The armor’s design is intricate, to say the least, and it looks as though a lot of care was put into replicating the character’s armor for this figure. It has a nice, weathered paint job that further adds to its authenticity, and the blue body suit Jor-El wears beneath it provides a strong contrast that makes it pop all the more. 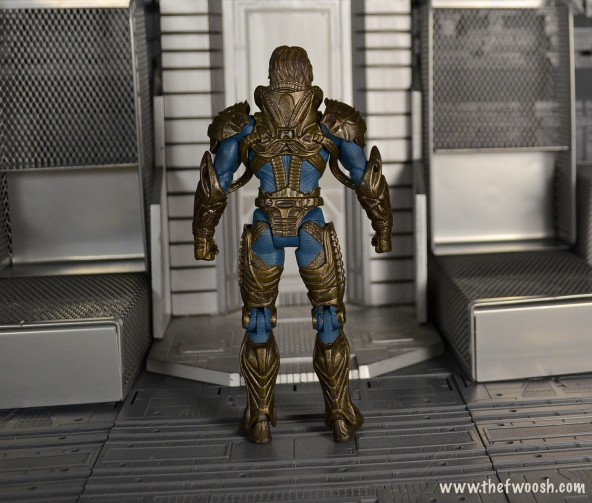 The only drawback to the realism of the armor is the coil that attaches each of his gauntlets to his back. Mine feel as though they can’t be removed, and while they are flexible, they hinder the range of motion of his arms quite a bit. So he’s already lacking an ab crunch, and now his arms can’t really move all that much. It seems as though Jor-El here was destined to be forever in a vanilla pose. 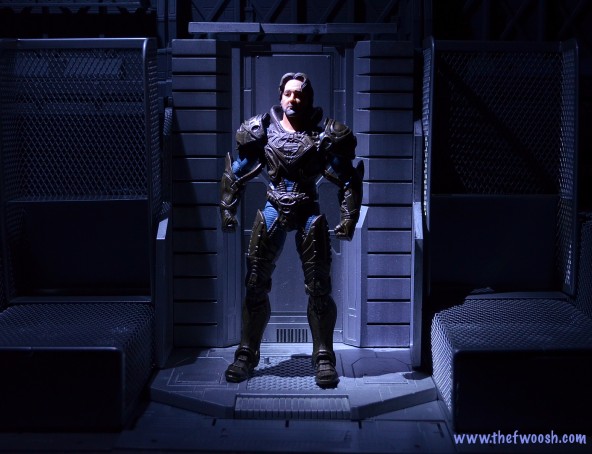 The likeness to the actors is what really attracted me to these Movie Masters figures, and, to that end, Jor-El is awesome. I haven’t seen movie figures that were this faithful to their source outside of Mezco or NECA (or Hot Toys, for that matter), so this feels like a big step forward for Mattel in that respect. 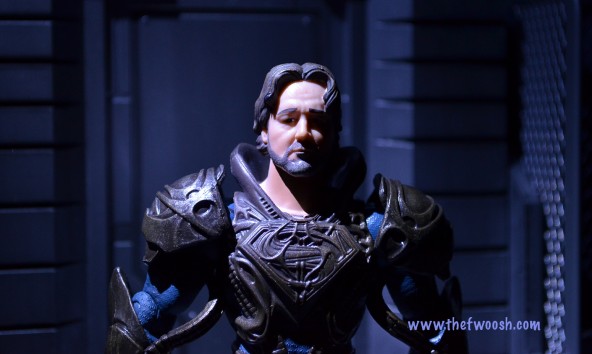 Now, it’s not impossible to get some dynamic poses out of Jor-El, but it would help if your expectations in that department were lowered a little. The below pose was the most “action-packed” I could get out of him, but maybe that’s OK since he’s Superman’s dad — does he really need to do more than run as his planet dies? Even so, I know many don’t appreciate the scrimping in the articulation department, and I fully understand that, but hopefully those people can still find enough here to like. 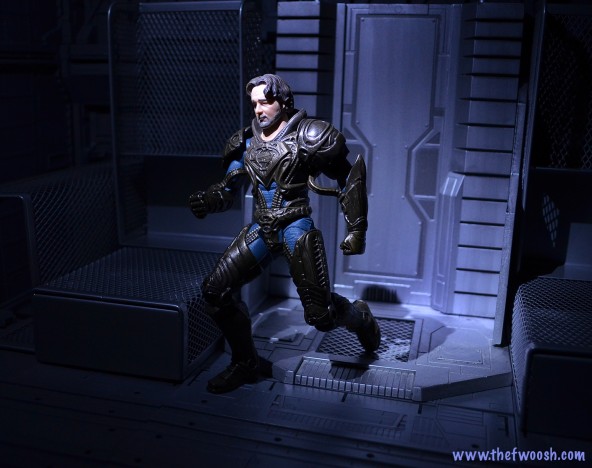 The limitations of his articulation become even more clear when you start playing around with him in conjunction with the other figures in this series (or any other six-inch figure you happen to have sitting around). They’re all fairly limited, but Jor-El’s limitations stand out even more in comparison. 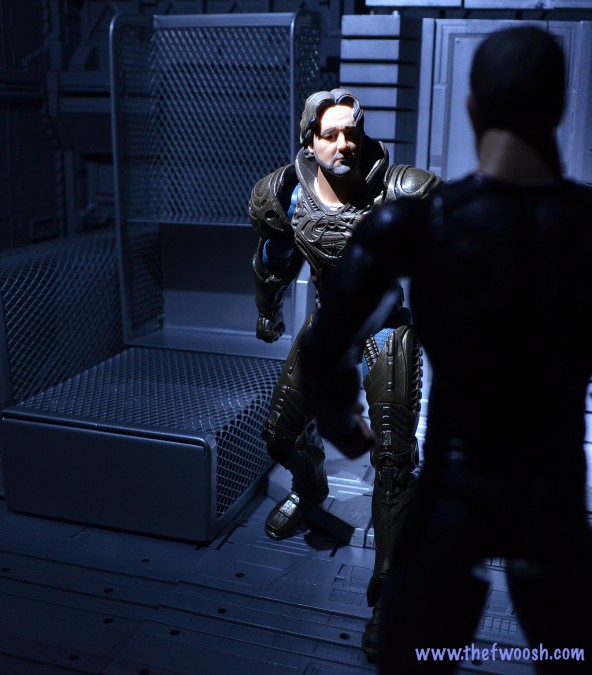 Take Zod, for example. If he had an ab crunch, he’d be as good as any DC Universe Classics figure, which is pretty much the standard for DC figures we’ve come to expect. Jor-El’s armor holds him back even more, but it looks so good that I’m willing to overlook it and just deal with it. 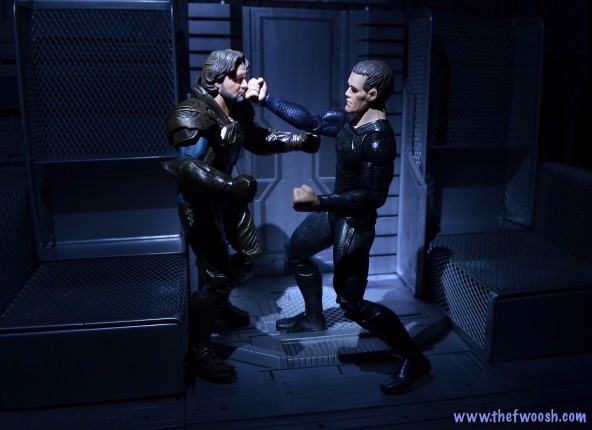 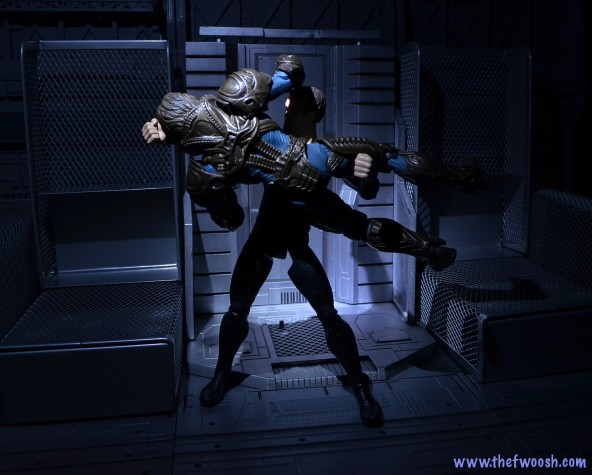 Let’s face it: the figure with the better articulation will always win a match of fisticuffs. 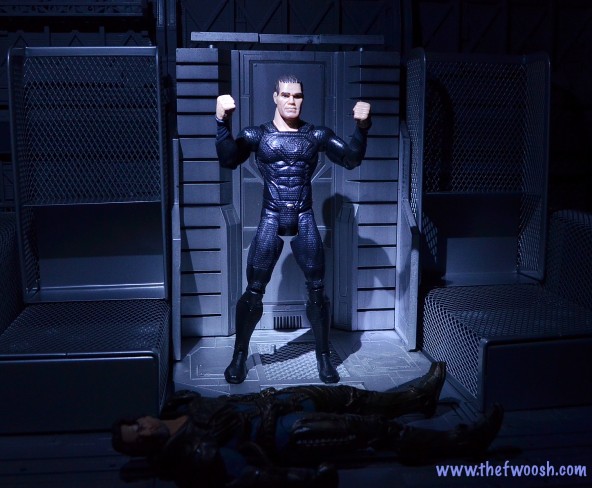 Zod may be able to move more than Jor-El, but so can Superman, so maybe he’s met his match as Jor-El helplessly looks on. 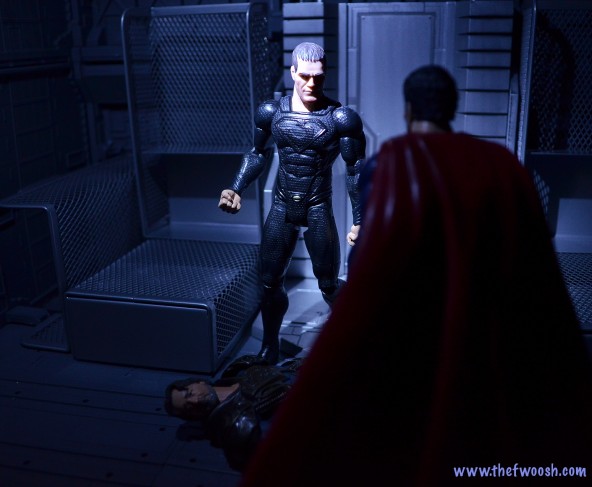 These figures are popping up at all the major retailers currently, so they shouldn’t be too difficult to track down with a little work. Be aware, however, that Jor-El is packed one-per-case, so he may harder to find on the pegs than the others. He’s worth the effort, though, because he really does look awesome. If you’re not having any luck at brick-and-mortar retail stores, you can try your luck with Amazon as well, though he has been selling out quickly and the third-party sellers have been a bit overzealous with their pricing. It may be worth your time to keep an eye on the site, though.