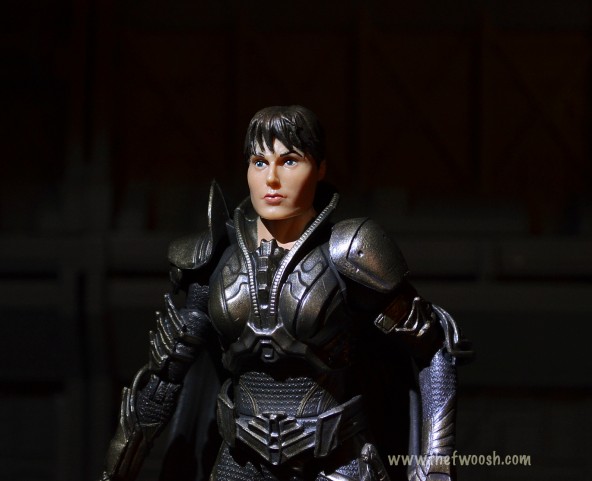 The big day is getting closer! Man of Steel opens in US theaters later this week, and we’ll be taking a look at a few more Movie Masters figures as opening weekend gets closer. Last week Matthew K and I took a look at General Zod and Jor-El, and this week I’m pleased to be focusing on Faora — the lone female figure in the series, at least so far. Faora, or Ursa as she is sometimes known, is General Zod’s most loyal follower and, well, his girlfriend, basically. The character was played by Sarah Douglas in Superman II to great effect, so I’m anxious to see how different Antje Traue’s take on the character will be in Man of Steel. Just based on the figure alone, this version of the character seems to be much more serious and imposing, but we’ll only know for sure once we see the movie. 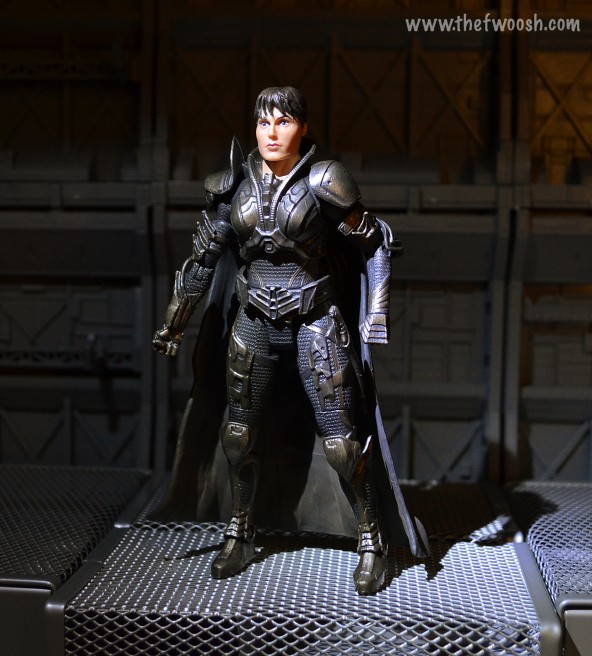 Faora’s armor is almost medieval in appearance, which gives her a bit of a “Joan of Arc” look. It has a touch of a gold hue that sets her apart from Zod in his armored-up look. I’m a big fan of this look for her, and, really, I can see her being repurposed into any number of collections since her armor is just a touch generic. 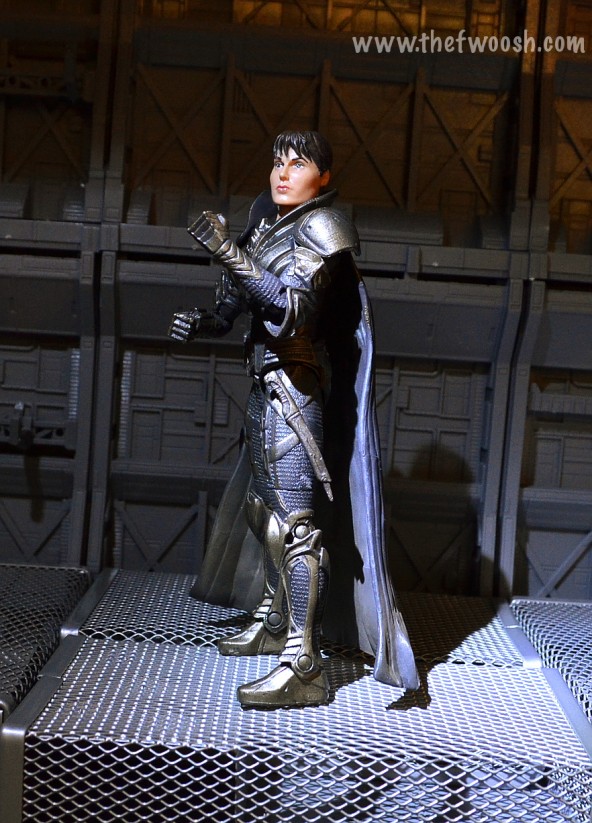 The sculpt is highly detailed and, like Jor-El, is definitely the highlight of the figure. It’s an awesome look that manages to look feminine and powerful at the same time. Like Jor-El, her articulation is limited, but this is another case where I’m willing to overlook those limitations because the sculpt and paint are so good. Now, I haven’t seen the movie yet, so I don’t know how faithful to the movie this armor is, but I do know that I’m definitely fond of what I’m seeing so far. Of course, that could change once I see the movie, but as of now I remain blissfully ignorant. 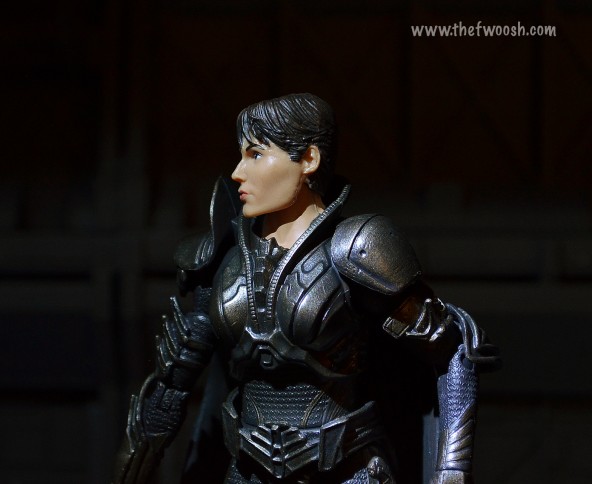 This is a sculpt with an emphasis on realism, and Faora’s head-sculpt definitely does a great job of capturing that realism. And not just the head-sculpt — all the detail work, like the chain-mail texture of her armor, does so much in adding to her realistic look. Again, I’m really blown away here. 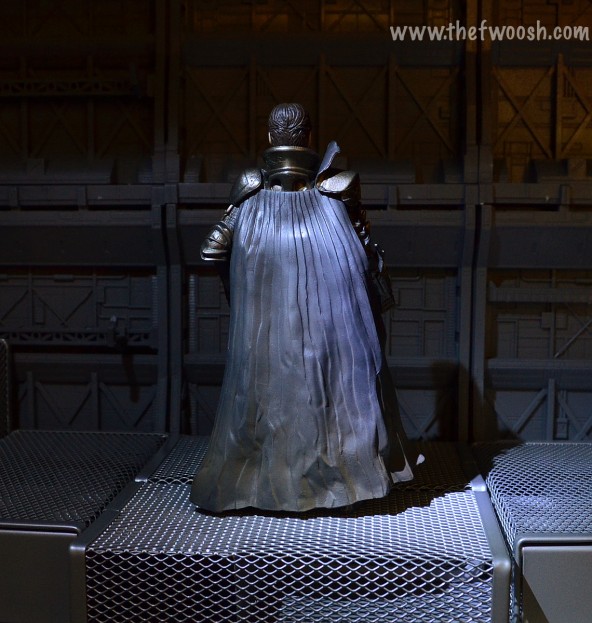 Even her cape looks great. Usually, a Mattel DC figure’s cape doesn’t get much attention, but here that’s a different story. There’s an actual weathering effect that was employed to give her cape an old, tattered look, and I’m actually kind of impressed. It’s not perfect or anything, and at some angles it just looks “dirty,” but I appreciate the effort on Mattel’s part. I think this sort of thing is a step in the right direction for them. 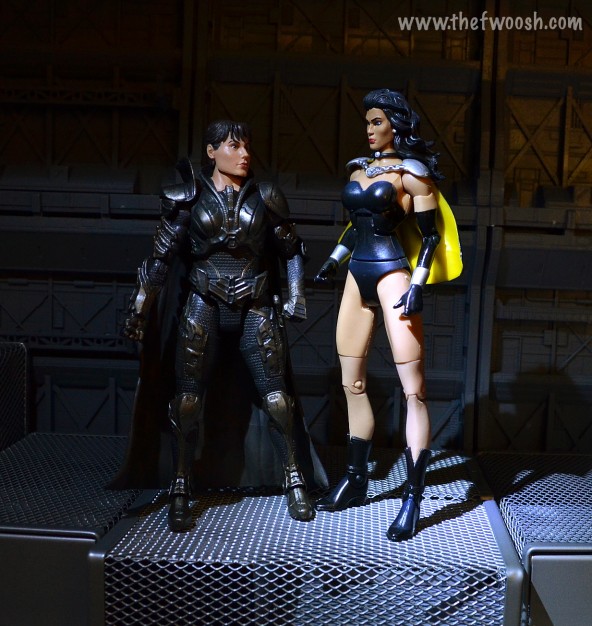 Like all Movie Masters figures, Faora isn’t the biggest figure around by any means. Her proportions are meant to be closer to an actual person rather than a superhero, and I’d say that’s accurate in her case. Also, her proportions aren’t of the exaggerated-female-superhero variety.  She isn’t all thigh and bust, but is actually shaped more like a real woman. It’s refreshing, honestly. 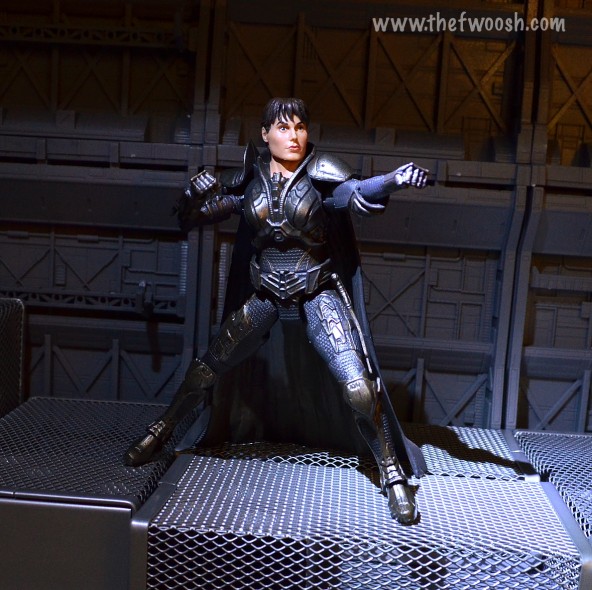 As far as articulation is concerned, what we get isn’t great, but it’s not horrible either. Like the other Man of Steel Movie Masters, she doesn’t have an ab crunch. The break in her armor sure makes it look as though there’s an ab crunch there, but, unfortunately, there isn’t one. I’m not sure how much I miss it, honestly. This isn’t a figure I’m going to have in many action poses, so what articulation she does have feels adequate to me, but your mileage may vary. 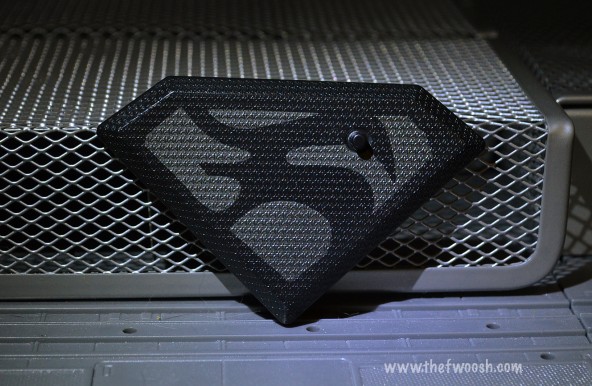 Like the other figures in the series, she comes with her own stand with her own insignia printed on it. Hers looks like a chicken to me. 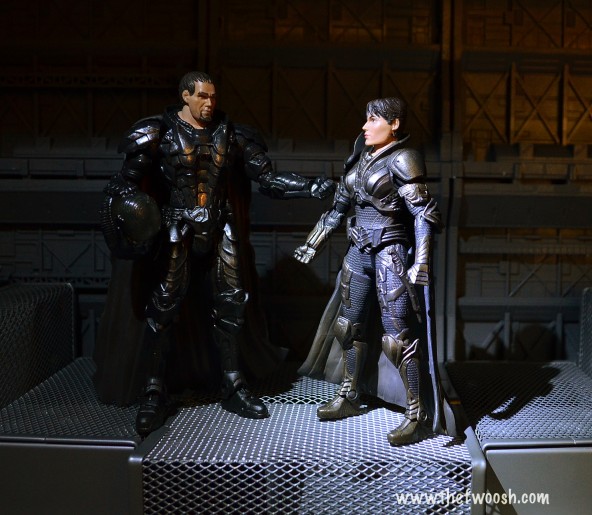 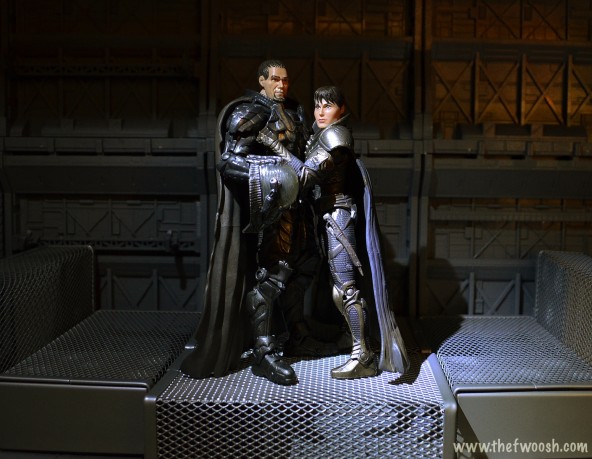 She is the perfect companion to the armored-up Zod and looks great when posed with him. The light blues and golds of her armor compliment his blacks and silvers nicely. I can’t wait to see these two in action (get your head out of the gutter) in the movie. As much as I love Superman II, especially the “Donner Cut,” I’m looking forward to seeing a truly formidable team whaling on Supes.  I’m really hoping the characters in the movie live up to the expectations these figures have saddled me with. 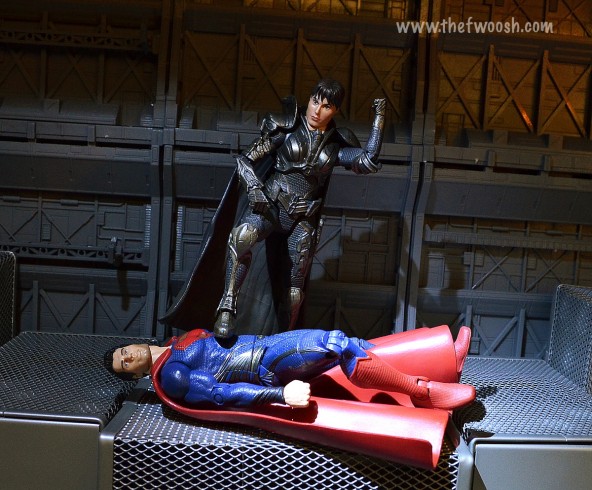 Like the other figures in the series, Faora can be found at most major brick-and-mortar stores. Or, if it’s more convenient for you, she can be purchased from Amazon as well. If you’re even remotely interested in this line, then Faora is a must. Unfortunately, like Jor-El, Faora is short-packed to just one-per-case, so she may prove to be difficult to track down, especially if the movie ends up being a hit. But I’d recommend picking up one sooner rather than later.