I received my Octavia figure on Friday and since Mattel did not provide early samples for a first look this month, I thought I would hurry up and publish some Octavia pictures ahead of the Monday June 17th sale date.  Take a (almost first) look! 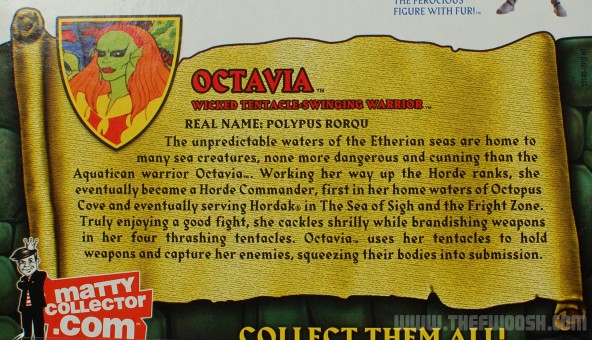 The bio is good.  It fits in well with what we know from Octavia’s two appearances on the She-Ra TV show and gives us a little insight into her personality.  She’s worked her way up the ranks and she enjoys the fight.  I could see that leading to conflicts with her fellow Hordesmen for sure.  I have to say, though I don’t usually care for them, I actually like this real name.

The tentacles are made of a fairly stiff plastic.  You can bend them, but they will move back to their original shape.  Each tentacle is unique and is numbered.  Each tentacle has a hinge joint with a peg at the end that plugs into the figure’s back, giving each tentacle the range of motion you would expect from a shoulder joint.  They can swivel up and down at the back and hinge forward and backward, but the forward range of motion is blocked by the body and the backward range is mostly blocked by the hair.  The lower tentacles can move backward a bit more than the higher ones.

The problem I have with the tentacles is they can’t really be posed in a forward attack motion, she has to attack from the side.  If they had included a swivel near the peg or made the tentacles from bendy material, I think she would be a bit more fun to pose.  Fortunately, you can get a variety of tentacle poses by swapping around the order they are inserted in her back so you can get her Filmation ‘at rest’ look and sword flailing look with no problem.

The peg itself is made from a very stiff plastic and the sockets are made from a stiffer PVC that has some flex to it, so they pop in and stay in fine. 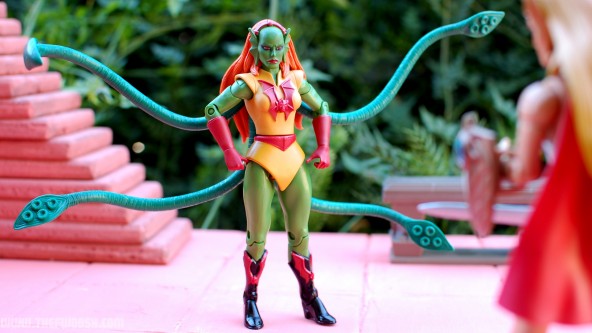 The tentacles hold poses just fine and I have not noticed an increased looseness even after popping out and rearranging the tentacles multiple times over the past couple days. 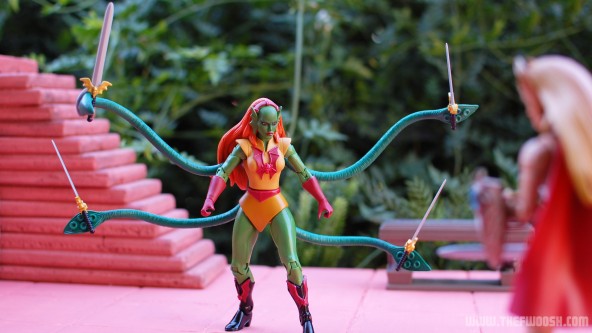 The swords look very much like the swords she wielded in the She-Ra episode “Treasure of the First Ones” except a little extra detail has been added to the hilt and a clip has been added so that they stay on her tentacles. 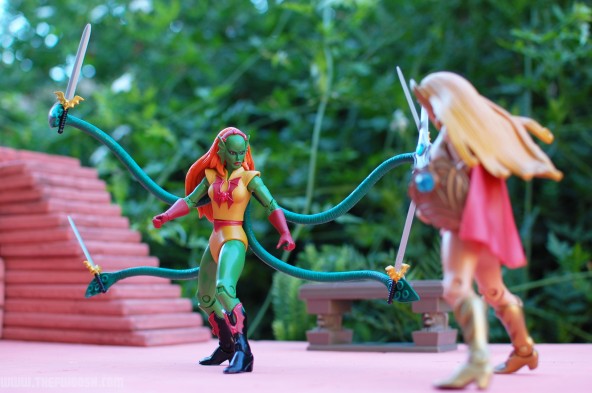 The 4H cleverly re-worked the Filmation sword hilt design into a batwing horde symbol.  The clip is functional, but it also has a bit of a piratical cutlass feel to the swords that I like. 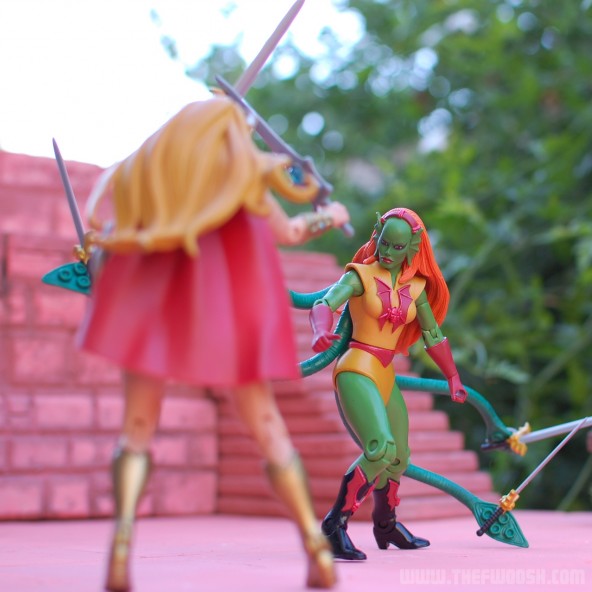 Her Horde crossbow is the first female sized crossbow in the line and I have to say that I absolutely love that they made a crossbow for Octavia.  All the original Horde figures had one, so adding a crossbow sized to fit the female Horde members makes total sense! 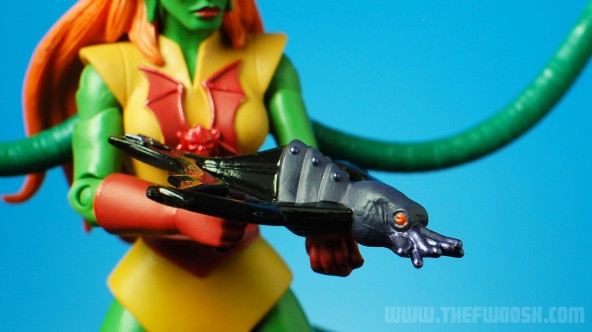 I also love the cool little sea monster or Cthulu looking face on Octavia’s crossbow that replaces the traditional bat.  Although I’m not sure where the crossbow bolt is coming from here, it seems fitting and looks fun. 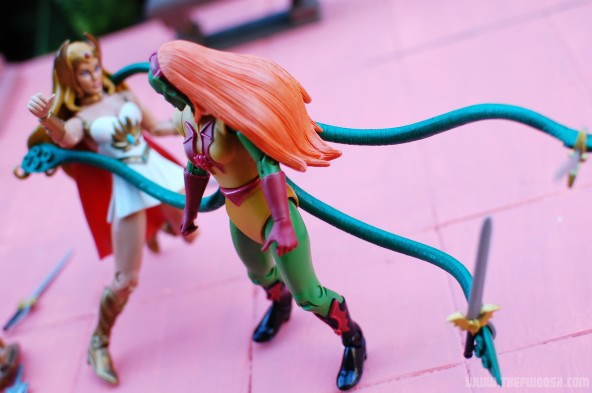 Octavia features new boots, gloves, torso, and head and re-uses the She-Ra upper arms and upper legs.  The face sculpt is really quite beautiful in a strange way.  I feel like they captured the look of Octavia in the show and improved upon it. 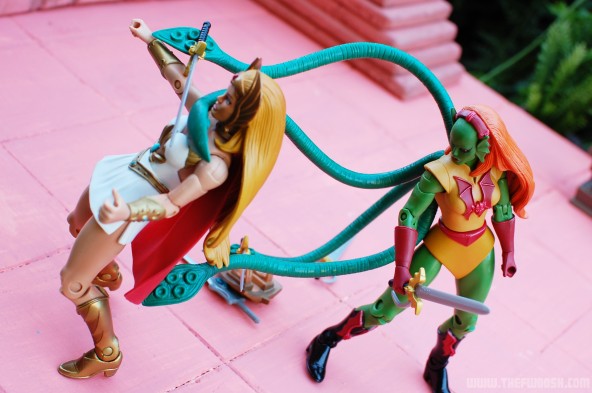 The tentacles have a lot of neat textural detail and that adds some visual interest to Octavia’s overall appearance.  They are also sculpted in a way to show writhing movement and the sucker pods are flexing and bending. 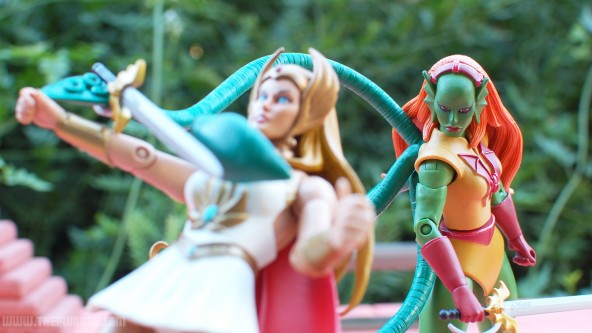 The only real critique I have is that the lower torso is undefined and doesn’t quite look like the leotard Octavia’s costume appears to be on the show.   Mattel has struggled with this costume design ever since year one and Adora and while this is an improvement on Adora’s outfit, it’s still not quite right. 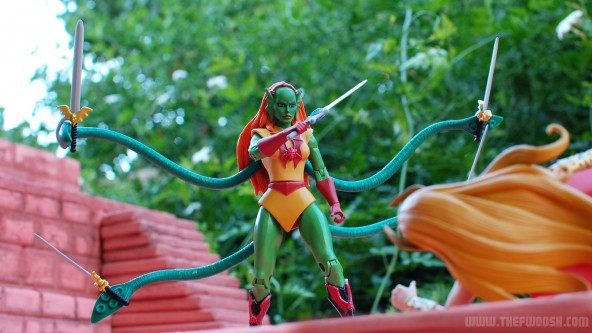 The prototype sculpt showed a lower torso piece that hugged the body and curved under the crotch, but the final figure has no curve and no definition to it, so it basically looks like a super short triangular skirt.  I’d request that Mattel’s design team go back to the drawing board on this concept before we get to Glimmer.  You can tuck the piece under her legs, but it won’t really stay without glue of some kind and it still looks strange since it is so flat and formless. 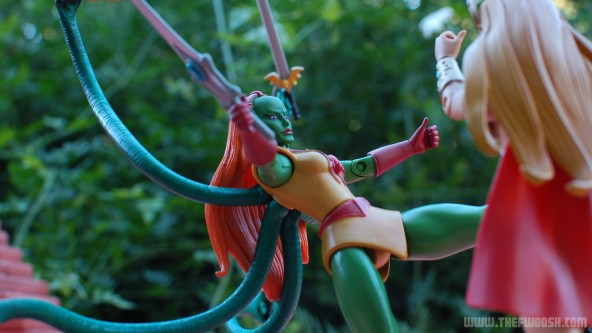 Octavia has the standard MOTUC articulation with the usual female omitted ab crunch.  Hip articulation is free and clear due to the softness of the lower torso piece.  The hair and tentacles combine to inhibit neck articulation.  Octavia cannot really look up, but I was not expecting this due to the design. 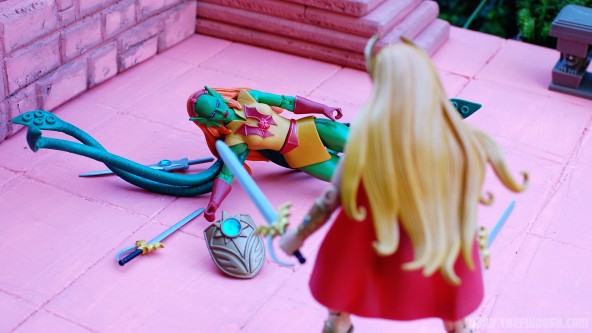 Octavia has some pretty standard paint work with colored plastic to match the main parts of her body, hair and tunic.  The red uniform details are nice and crisp and the glossy black boots are a nice touch that adds a bit more visual interest.   I can’t quite tell if there is a wash on the tentacles.  It looks like there might be, but if it is, it’s very subtle. 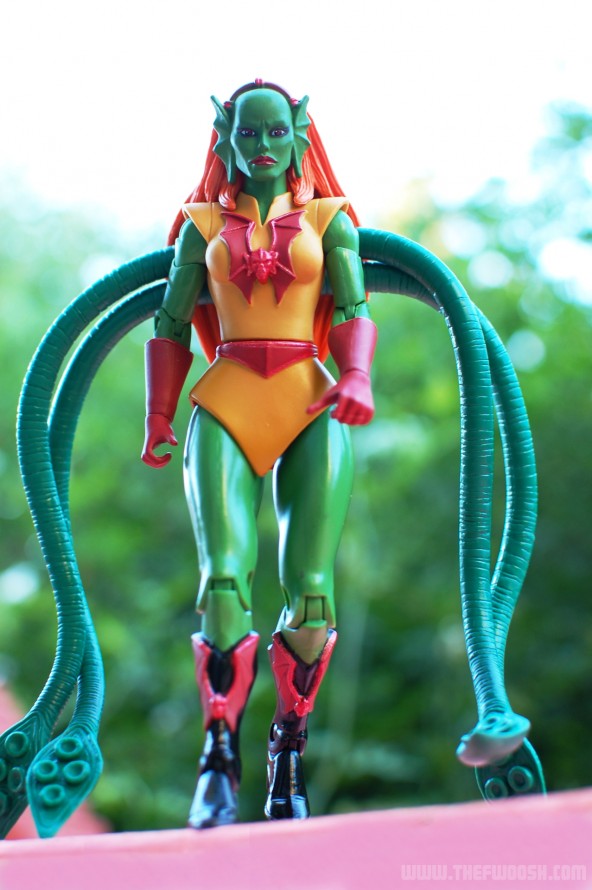 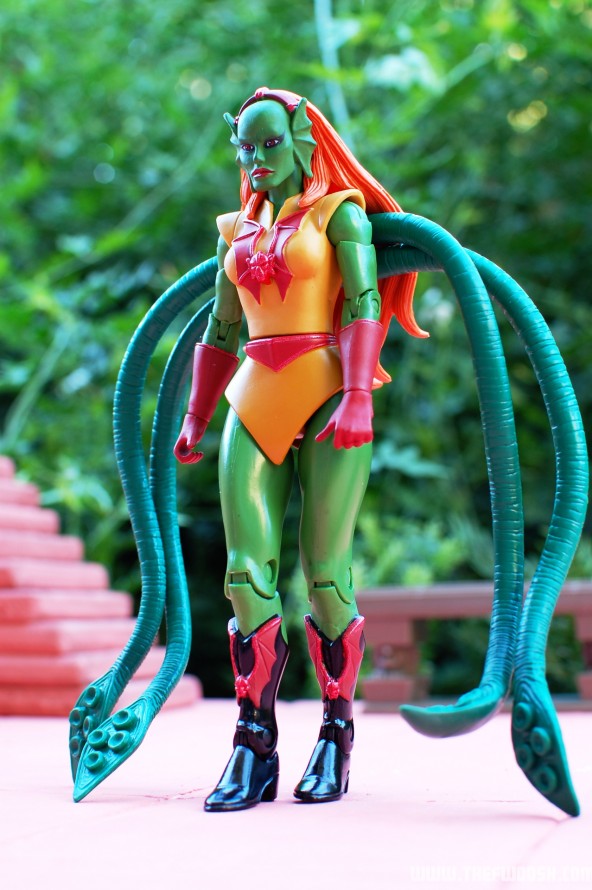 Octavia is one of those Filmation only characters that I have been looking forward to getting and a few articulation quibbles aside, she does not disappoint.  The tentacles, limited as they are, still make for a striking look posed on the shelf.