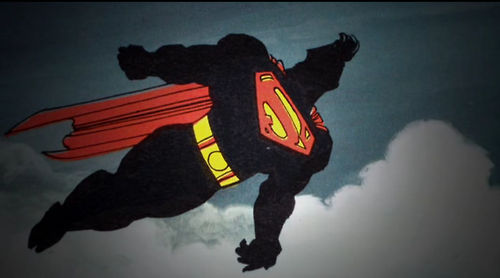 As those of you “fortunate” enough to interact with me on a regular basis already know, I’m pretty unapologetic about how disappointed I’ve become with Mattel and what passes for their Unlimited lines.  I’m sorry.  Wait, no I’m not…

But that isn’t to say there haven’t been any bright spots, though. And the brightest of them for me, and a good lot of others, had to be finally getting a decent Dark Knight Returns Batman. As my friend Colirio noted, he tends to highlight the best that today’s Mattel has to offer: A-list character, much demanded look, media tie-in, and the best reuse; the kind where you steal from MOTU to get a solid hunk of figure. I’ve had him for months, and, by his sheer force of presence, he’s kept my DCUC collection purge from taking everybody with it.

Still, I have taken to thinking of him as my final Mattel DCUC-ish figure. Sure, I bought the Movie Masters Superman, but he’s only still here because I lost the receipt; however, I’m starting to wonder if really has to be that bad. I mean, surely there’s other Batmen Mattel can make that I would be interested in… Red Rain… or other DC heavyweights in a new style… Injustice… 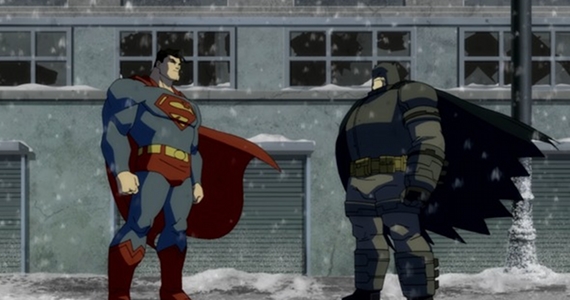 Huh. Well, maybe they could do some more DKR stuff?  Pretty hard to screw that up…

Dark Knight Returns isn’t exactly Justice League Unlimited, but it does have a pretty interesting roster of characters that, done in this hybrid DCUC/MOTU style, could be a lot of fun, and could cash-in on a lot of both styles’ fans. Let’s go ahead and start with the easy one: 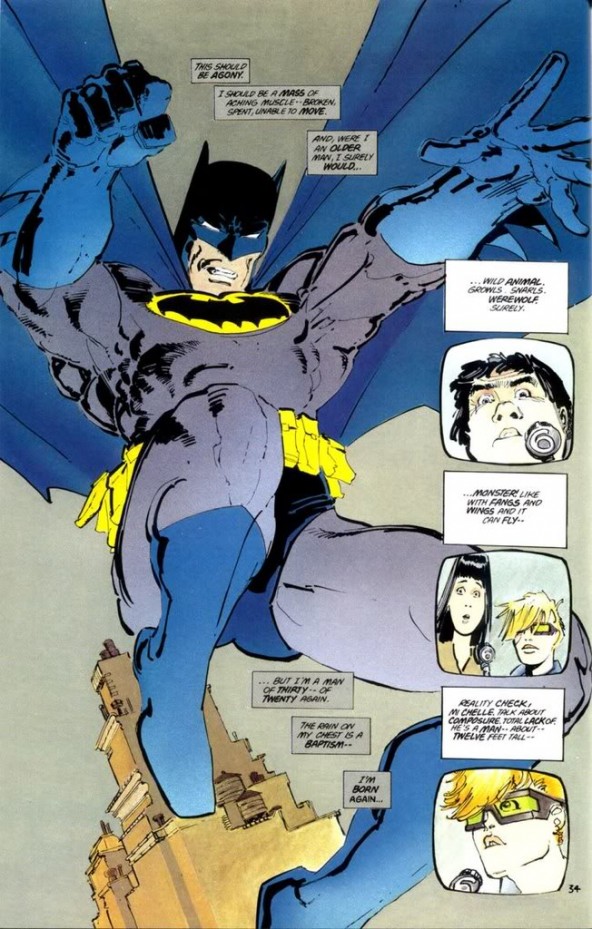 Hey, one good turn deserves another — or two. We’ve received a damn good version of what I think is the most iconic Dark Knight look — the one he sports from the end of Book Two to the middle of Book Four, but there are some incredibly fun options that are equally worthy of representation.

The classic blue and gray is an obvious choice. I think Miller went with it to open the book since it was the current look in the regular titles (and had been for some time), and, of all Batman’s appearances, this is him at his most super-heroic looking. 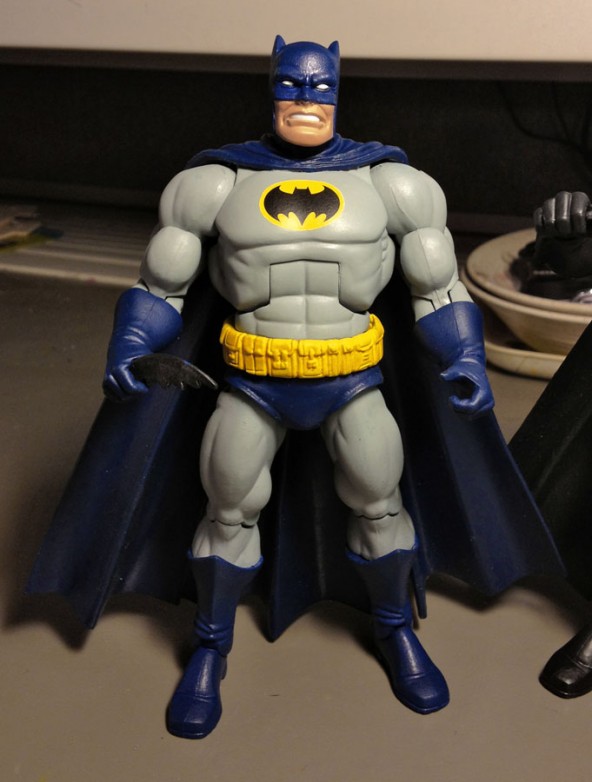 As Big Guido illustrates flawlessly here, this is easily accomplished. All he needs is redeco: a nice big tampograph yellow target on his chest and he’ll do the job. Serious bonus points would come from a unique head sculpt, and his bolt-action grappling-hook rifle. And, yeah — they could use the bonus points. 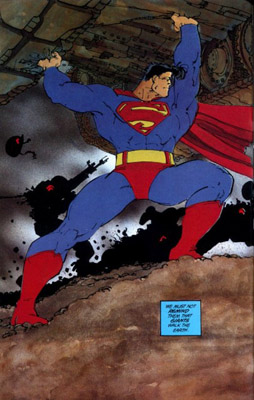 Of all the nonsense on this page, this is the most important: A MOTU-sized Superman is probably the most-needed thing I’m going to mention.

Customizer FitzJedi did an outstanding job with his: 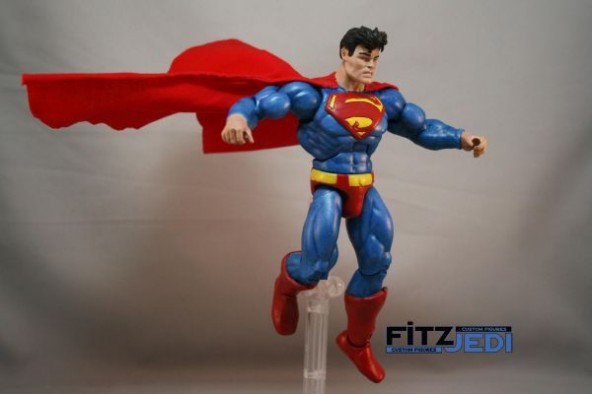 All that has to be done here are boots and belt/crotch parts, a decent cape, and a head with a mean spit-curl.  Seriously, this would not only have me haunting the pegs every night like it as 2006 again, but would damn near restore my faith in humanity all on its own. 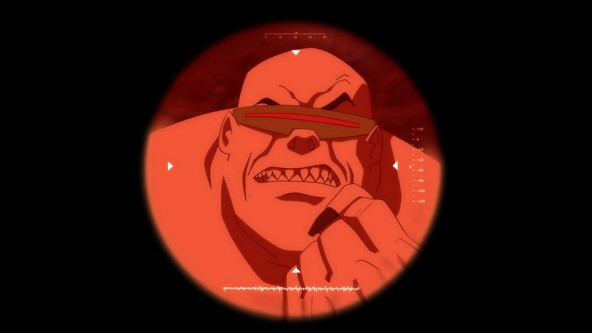 In many ways, this guy is like a proto-Bane. Not really all that memorable other than some… graphic soundbites and some pointy nipples, this strange beast of a man still gave Bruce one helluva beating in Book Two. And watching it in the animated feature was just as brutal, maybe even a little more so. I think he deserves a MOTU reuse, just for bringing “spud” into my regular vocabulary. 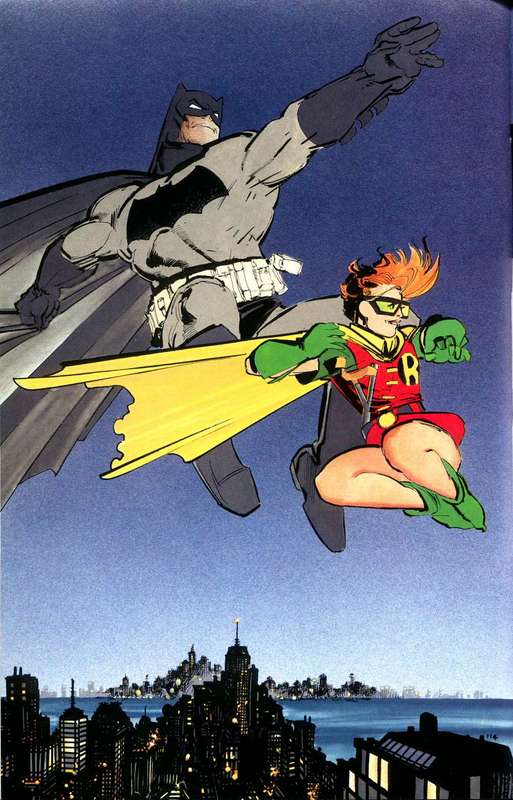 I honestly don’t know what to say here.  Some of this list is so damned obvious I can hardly make a case for it, and it’s staggering that they don’t exist already.  So let’s go with this: Mattel. Batman good. Robin good. Dark Knight Batman good.  Dark Knight Robin also good. Please make. 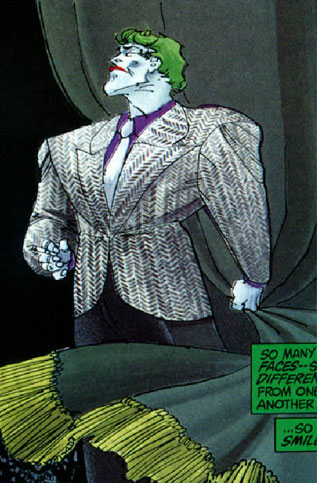 And with this inclusion, we fill out the DC Direct set’s offerings. Joker and Robin are the tougher ones on my list, though, since preteen girl and creepy guy in suit are not body types readily found in MOTU (or DCUC for that matter). Still, like Robin, a variation on a direly important character would be worth a little budget to make happen. 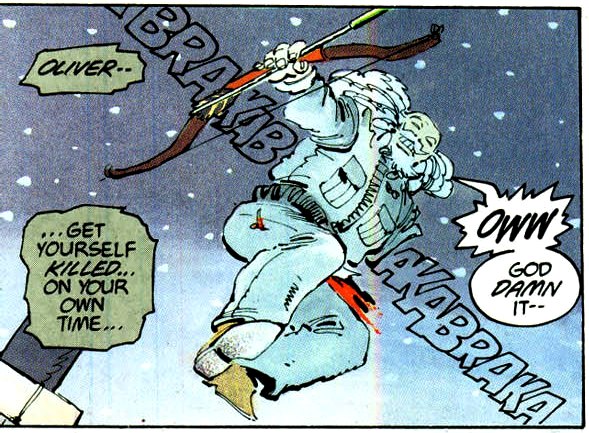 And why the hell not? Oliver Queen, mono-armed or not, is one of the baddest-asses the DCU has to offer. And he can save on tooling costs! Head, jacket overlay, one jacket arm — done.  There are already bows and arrows! He might be the biggest longshot of what I’ve laid out here, but still absolutely worth the effort.  I’d even visit MattyCollector for this one. 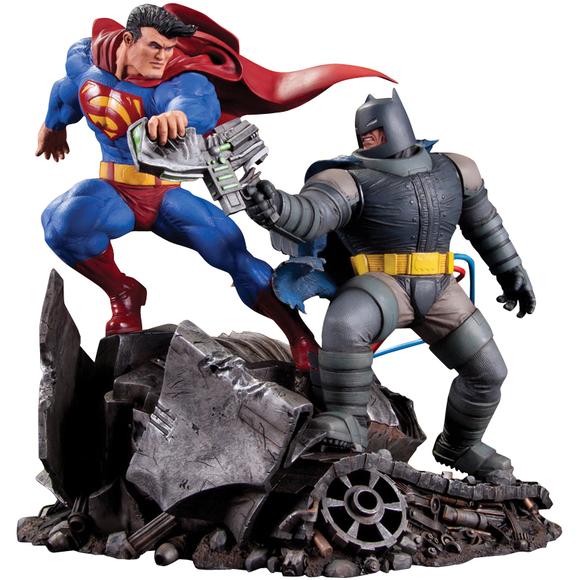 Hey, this is retail, baby! And if you’re going to make one-off Batman figures, you might as well go for broke.

I think this was the first real instance of Batman throwing on some “gear” to take on a more powerful foe. Now he does it twice a week. This suit always stuck out to me just because of how strictly utilitarian it feels. No big chest logo, no fancy bat-stylings, the belt’s there to hold stuff, the spikes are there to hurt stuff, and it literally feels like the ears on the helmet and the cape were afterthoughts. On a pure action-figure standpoint, this thing would be ridiculously fun to play with. He’s a walking Bat-Tank!  He could pick on the Hulk! He was in The Brave and the Bold, for hellsakes! 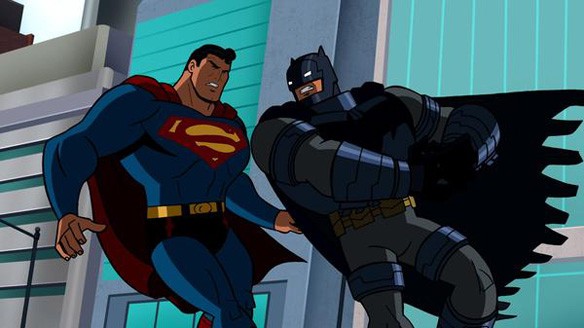 I would imagine there’s probably some decent parts to get this started with already in existence, so this might not be as daunting as it may seem. If there were any room left for extras in it, though, I’d love to see a helmetless head and his sonic gun. Batman hates guns, except when he doesn’t.

Anyway, from this pool you could absolutely draw some more out, like battle-damaged versions, slightly altered decoes, and so on, but if I could get just these listed, that would make for a pretty substantial collection without having to go much above and beyond what we’ve had in the past for things like Public Enemies. And the cross-sell to the He-Man fans? Huge, I’d bet.

Given my track record with want-and-response for this kind of article, odds are good you ain’t gonna see a damn thing that I’ve mentioned here. In fact, I might’ve jinxed it. I’m sorry about that.