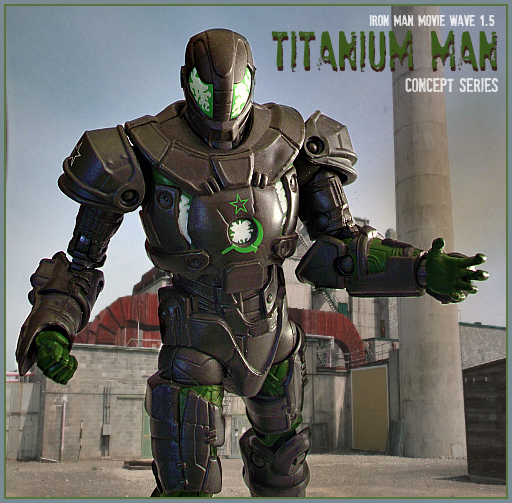 What were they thinking? It’s something we’ve all wondered at one time or another. Sometimes the decisions made by the toy companies that handle our favorite comic properties are puzzling, frustrating or downright infuriating. From the removal of once standard features like articulation and accessories to questionable character selection and case pack-outs, the choices made are often not in the collector’s best interest. And while it’s a given that profit drives production and the choices made are purely economical, there are other instances of bad decision-making that defy such logic. Case in point: when a fan-demanded villain finally gets an action figure, it’s in a bizarre costume that he never actually wore in a comic book. Oh, hi, Titanium Man!

Titanium Man comes to us from the first series of Iron Man movie action figures — okay, wave 1.5, to be precise. The set featured reissued versions of the Mark One, the Mark Three, and an Iron Monger figure that had been modified to have an opening cockpit. T-Man (as he shall henceforth be known) was an odd addition to the line. His “Concept Series” design came from the video game based on the first Iron Man movie. Here’s a side-by-side. 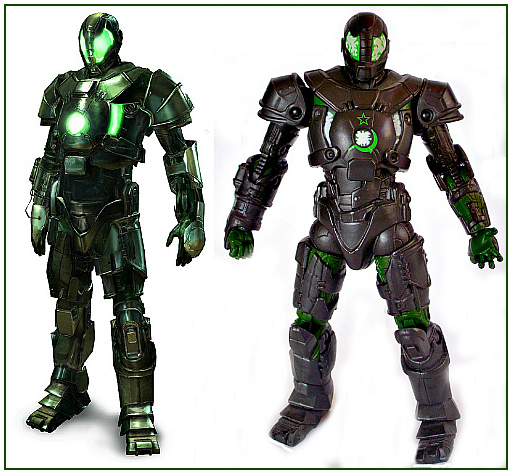 Looks like someone decided to Ruskie T-Man’s figure up with a few stars and a scythe. It’s an interesting take on the character — a little too HALO-inspired for my tastes, but I see what the designers were going for. The suit has a “real world” feel, with plenty of bolts and plates in evidence. It’s also a bit on the thick side, but nowhere near as thick as T-Man’s comic counterpart. I’m guessing they slimmed him down to provide more contrast between his look and that of the game’s main protagonist, the also-armored Iron Monger. The choice fits in with the line’s general aesthetic but really isn’t Titanium Man to me. 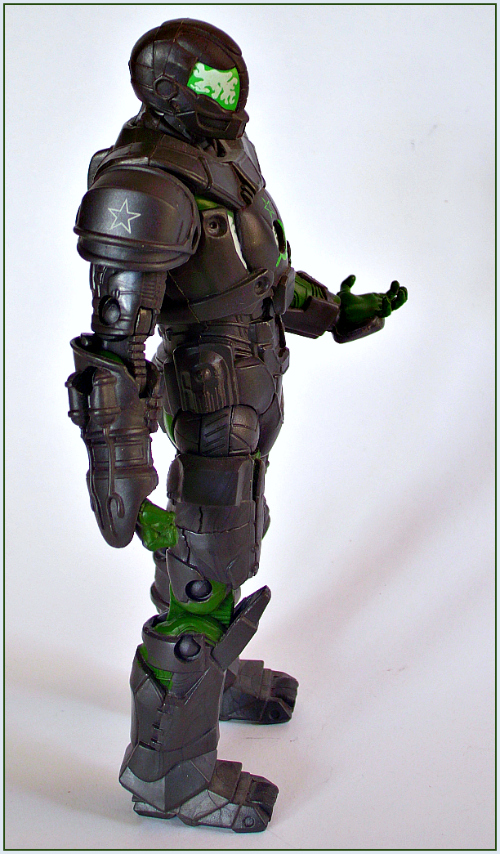 As you can see, T-Man has some small hands. Like, “I’ll bet you five bucks I can fit my whole fist in my mouth” small. It’s unfortunate, as the rest of the figure sports decent proportions. In spite of it’s diminutive size, the open hand is nice and expressive, but drawing attention really isn’t in its best interest. 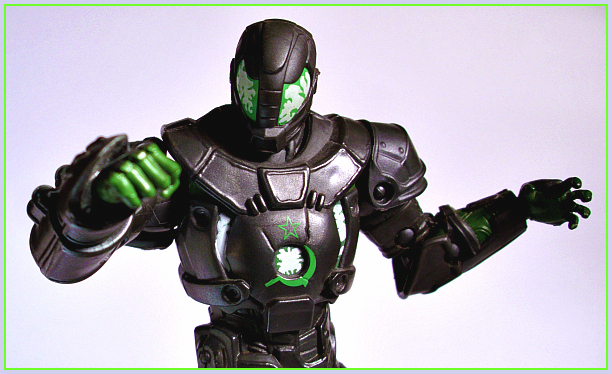 The deco on T-Man is minimal. The tampograph work on the symbols is exceptionally clean, but the sharp detail really emphasizes the lack of paint on the rest of the figure. Sure, there’s some muddy green down in the recesses of the sculpt, but it’s not nearly enough to satisfy. The dark gray plastic the figure is molded in is drab and lacks any sort of wash to bring out the detail. Which is a shame, because there is plenty of detail. In the hands of a talented painter this figure would come to life; as he is, T-Man just kind of fades into the background. 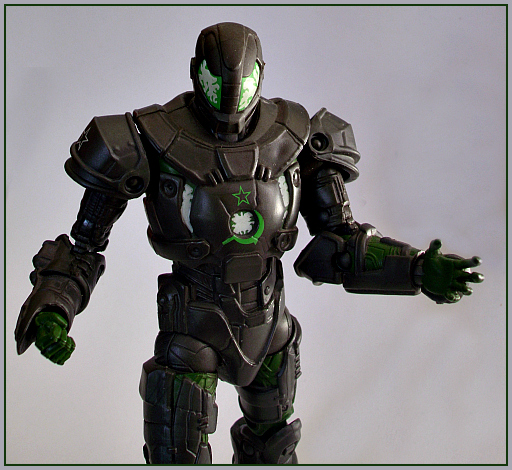 He comes equipped with a Double Concussion Blast Launcher, which is a fancy way of saying “oversized gun” It uses two bright green missiles and is completely worthless — I didn’t even bother taking a picture with it, it’s so lame. As a consumer, I would have rather seen that extra plastic go into the hands. If we’d been given two sets of properly-sized hands, it would have gone a long way towards improving this figure. 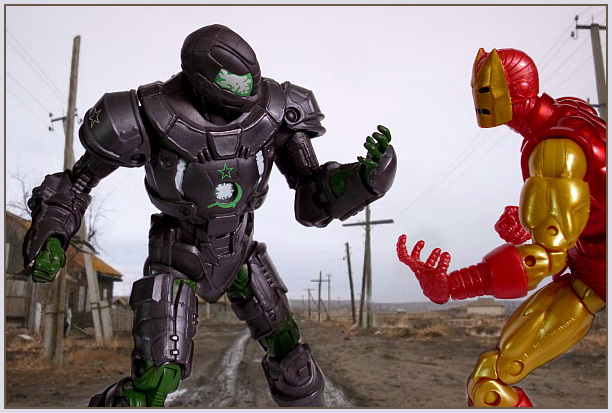 Titanium Man was digitally sculpted by artist Jay Kushwara, based on the game model. I understand what the designers were going for — in a way, the T-Man armor mirrors the Mark 1, with it’s more obvious construction and almost random assembly. I wouldn’t say T-Man is asymmetrical, but there are certainly enough differences from side-to-side to notice. The lower right arm sports a pretty nasty-looking flame-thrower, while the midsection is a choppy-looking selection of plates and wires. The legs continue the motif, each having its own distinct appearance. Speaking of symmetry, I noticed during the course of this photo shoot my figure appears to sport two right feet. So much for cutting-edge Russian technology… 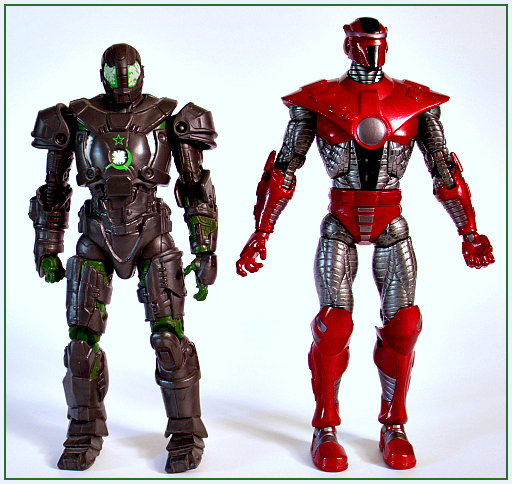 The elephant in the room here is obviously T-Man’s overall size. He appears to be closer to the 5″ scale — next to a standard Marvel Legend he’s clearly small. It’s about the strangest choice one can make for a character who has traditionally been represented as being a huge Russian dude encased in a massive suit of machinery. So what goes on here? I could go off on an Mister Oz-inspired tirade about the recession or make some topical “Hasblo” jokes, but the bottom line is nobody seems to know why T-Man is borderline petite. It’s just one of those things that happened; all we can do is move on. 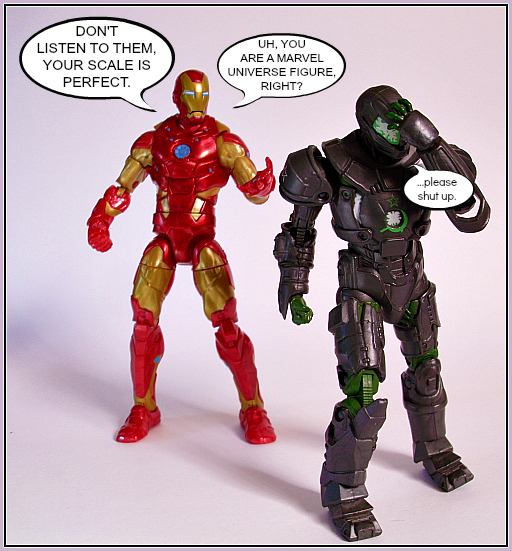 Aside from his double-whammy missile blaster whatsit, T-Man has no accessories. No stand or BAF piece either — hmmm, maybe there is something to that recession talk after all. The Iron Man line never really met its potential. Rampant repaints, constantly reused accessories, and and a grand total of two villain figures — the toys sold well enough but are far from the bright spot it might have been. Ultimately, Titanium Man is a disappointment — not for what he is, but for what he isn’t. From the choice to use undersized non-canonical armor to the cheap paint and worthless accessory, he’s an embarrassment of errors that somehow ended up in action figure form. Hasbro tried again, but that figure was clearly based on T-Man’s ’80s look. I think I speak for everyone when I say Titanium Man needs a new figure based on his classic armor. We’ve had the rest, Hasbro — now give us the best! 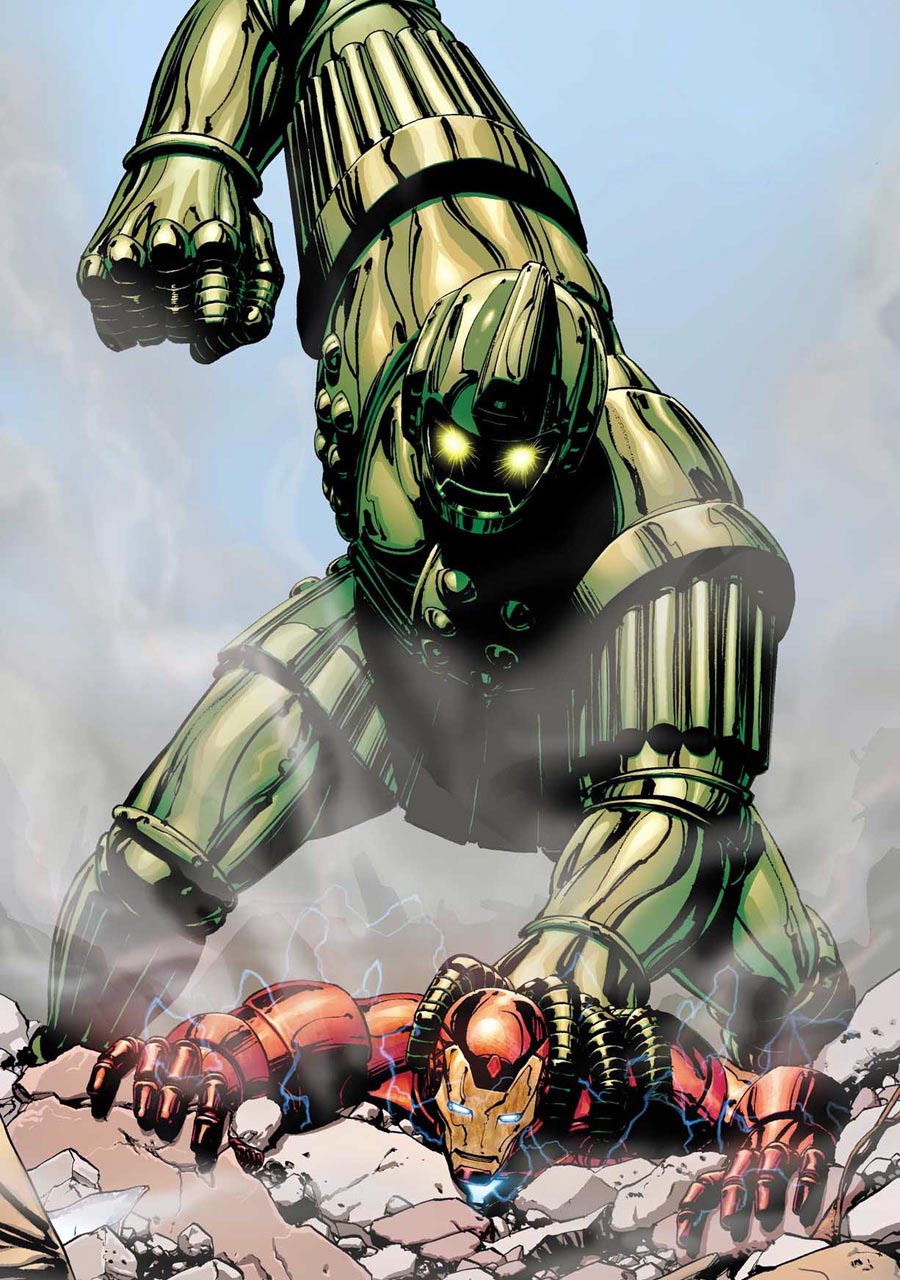