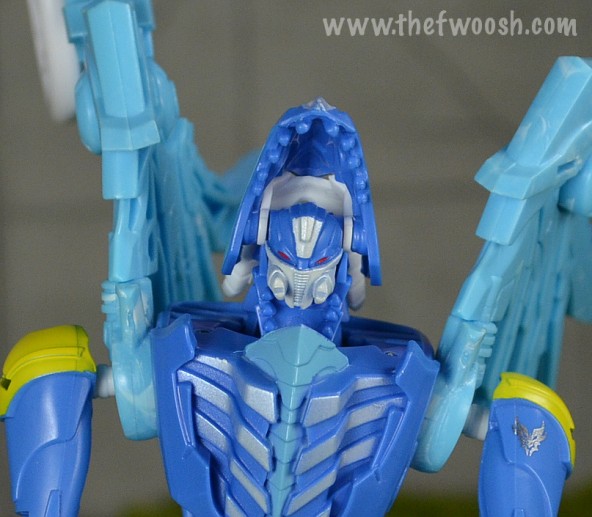 One of the key joys of the Transformers Prime: Beast Hunters line has been the dragons. They are just plain fun and it seems that each one has been better than the last. The dragons — or Predacons, as they’re known —  have only just been introduced on the show, so there’s still a lot of room for narrative growth and for the characters to be introduced and fleshed out. Until that time comes, however, we have time to do something we don’t often get the chance to do with Transformers releases: Mess around with some cool toys that don’t have much in the way of an emotional tether that sort of guides how we interpret the toys based on their respective characters. We have time to create our own narratives before the show fills us in, and I think that’s really cool and fun. So, for now, I’m loving figures like SkyStalker here that are nothing more than really cool-looking figures that demand to be picked up and messed around with, and SkyStalker has been hitting many of the spots that a fun toy should. 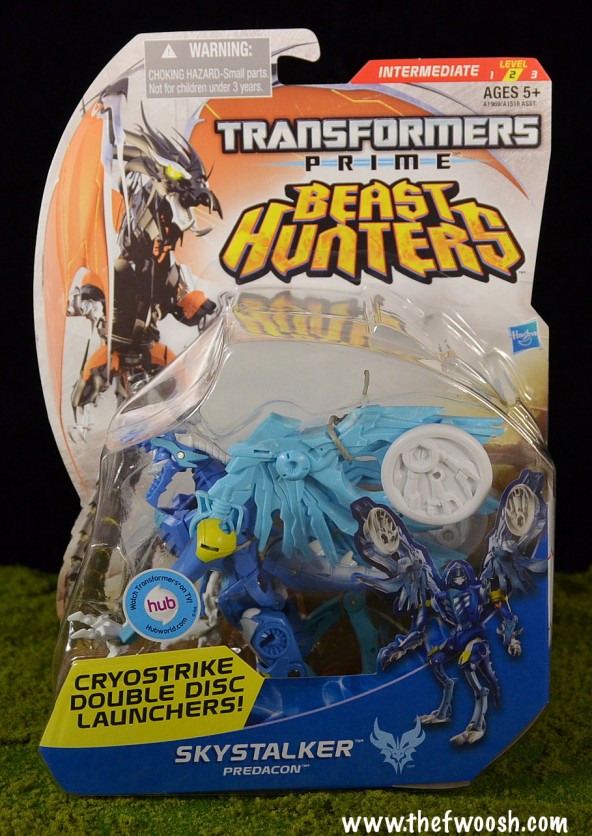 His card is the standard Beast Hunters card, but because of his color scheme, he is definitely going to look like a whole lot of blue when you see him hanging on the pegs. 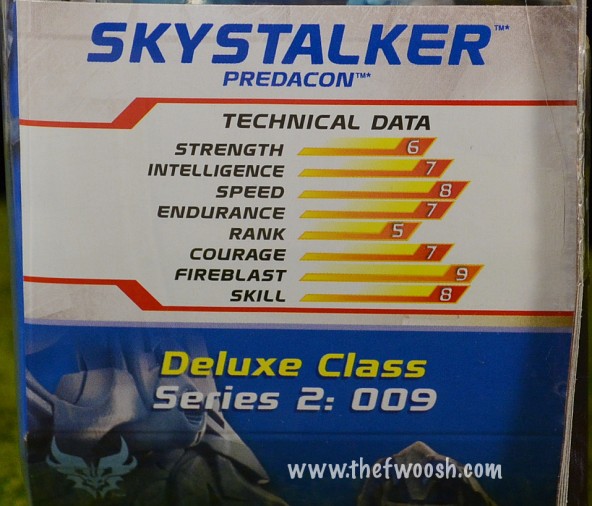 Apart from his fireblast score, he doesn’t seem to be the most Powerful Predacon we’ve seen yet, but it’s his brief little bio on the back of the card that’s the most intriguing to me. He’s described as an “ice-cold Predacon,” leaving us to infer that he’s an ice-dragon of some sort. His color scheme definitely suggests this could be a possibility, and I’m a sucker for all things ice/cold/snow related, so SkyStalker here has my attention. And on the most recent episode of the show, Predaking was last seen frozen in ice due to a clever trick perpetrated by the Autobots, so I’m hoping we’re going to be introduced to SkyStalker on the show sooner rather than later. I can’t wait to see this guy in action. 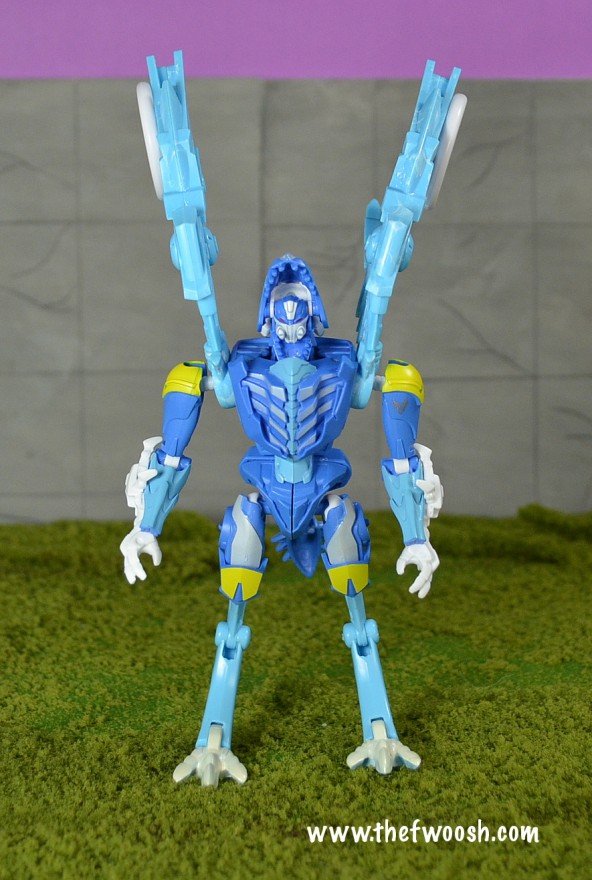 His ‘bot mode is… eh, it’s OK. I’m not jumping up and down with joy when I look at him. It feels mostly like an afterthought, like the dragon just stood up and the designers put together a robot mode the best they could with what they had to work with there. It’s not horrible, but it certainly isn’t great, either. His weird chicken legs are what bother me the most. They look rather incongruous with the rest of his body, and like, well, chicken legs. 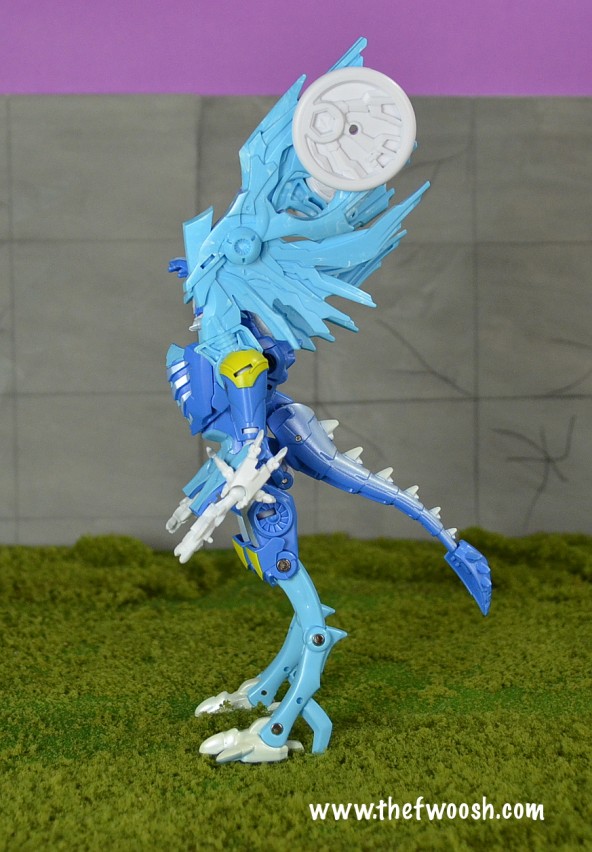 The giant wings aren’t doing his ‘bot mode any favors either. I wish there was a way for them to fold up at least a bit, but I guess it could  be worse. As it is it looks like a guy with chicken legs with big wings stemming from his shoulders. 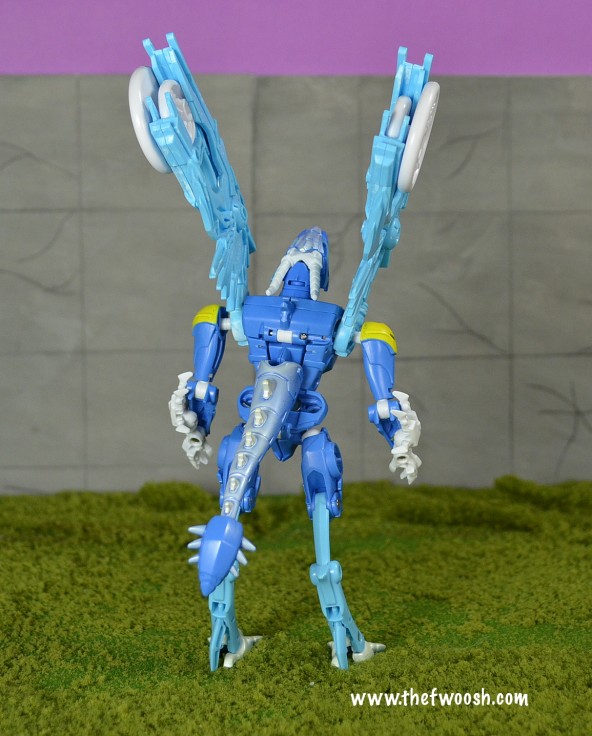 From the back, he just looks like a dragon standing on its hind legs, really. Nothing spectacular. 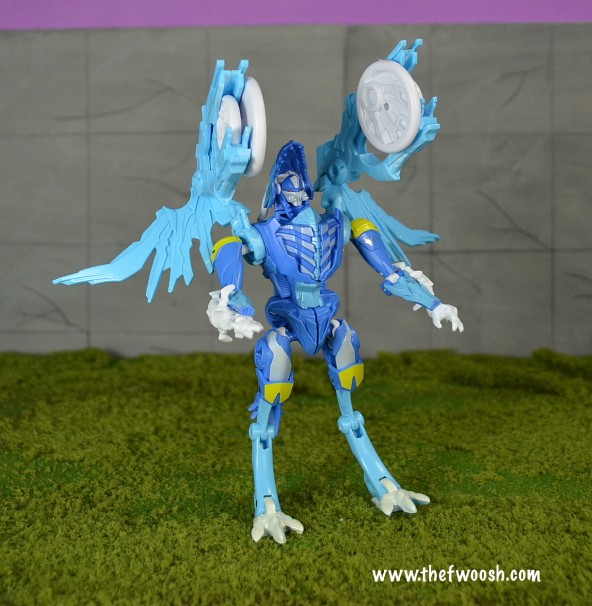 I do like that his wigs can be adjusted to serve as his weapons in his ‘bot mode. By twisting them to the front, they become shoulder-mounted cannons, essentially. I think that does look pretty cool. The white discs are supposed to shoot out when the top of the wings are pressed down, but mine don’t shoot out at all. I have to remove them by hand if they’re going to leave the wings at all. I’m not let down by this because that just means I don’t have to worry about losing the discs, but at the same time, it would be sorta neat if the action feature actually worked. I don’t know if this issue is unique to just mine, but if it’s not, then I can see this bothering a lot of people. 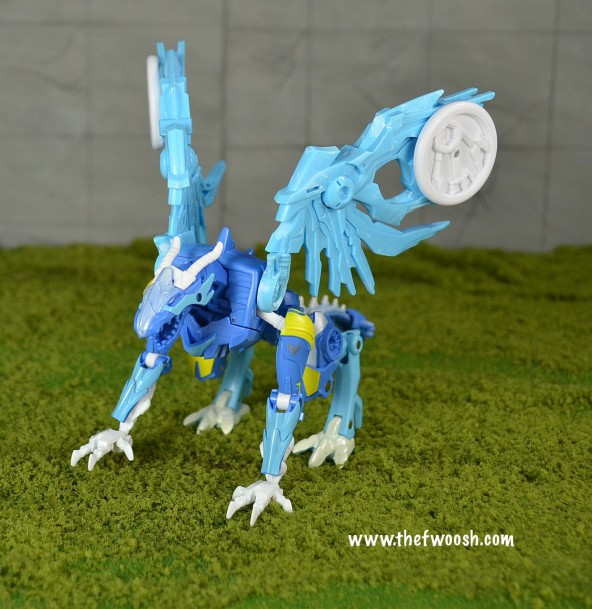 While the ‘bot mode may not be knocking anyone’s socks off, the dragon mode here is where the figure really shines. Maybe it’s just his color scheme, but I really like the look of this guy quite a bit. 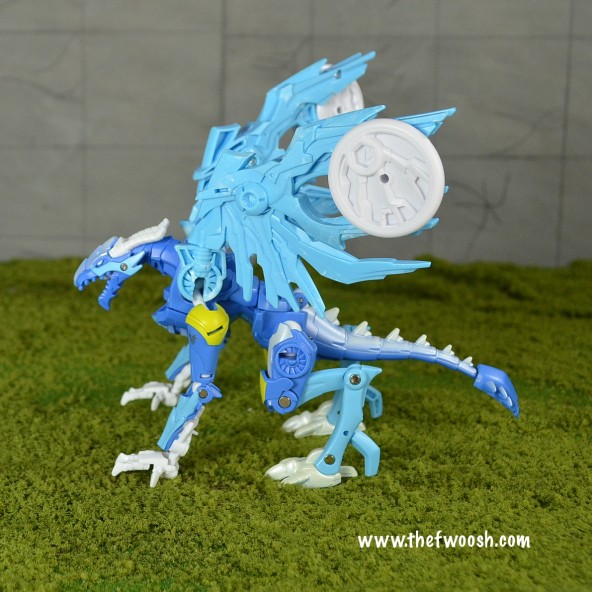 He’s got a nice, lean body with these powerful-looking wings that look like they could really do some damage. His tail looks to be covered in ice and ice spikes, and even his legs don’t look ridiculous in this mode — they just look cool. Now, the little heel-things on the back of his hind legs should be hidden in his dragon mode, but I really like the look of them when they’re extended. They’re meant to help his balance in ‘bot mode, but I think they look good in this mode too, so I’m leaving ’em be. 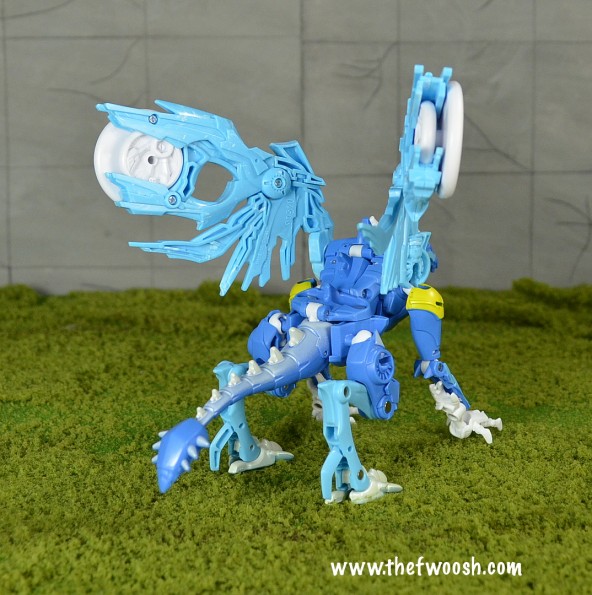 He’s robotic and sleek at the same time, and he looks good from any angle. As is the case with all the Predacons, the dragon mode is his primary mode and that’s where all the care and attention went in terms of his design, and it definitely shows. His dragon mode is just a knockout. 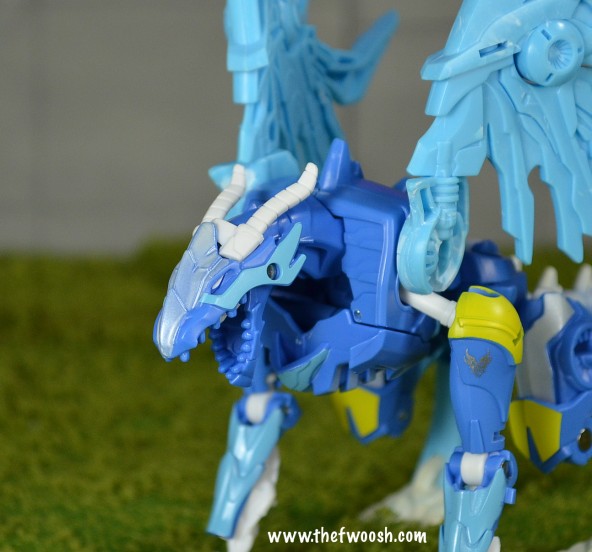 The dragon’s head sculpt is awesome and I love the horns. I’m picturing their being made of ice too. The shape of his head makes him look like some kind of goat/dragon/Satanic ice monster ready to swallow Autobot souls (sparks?). I love it. 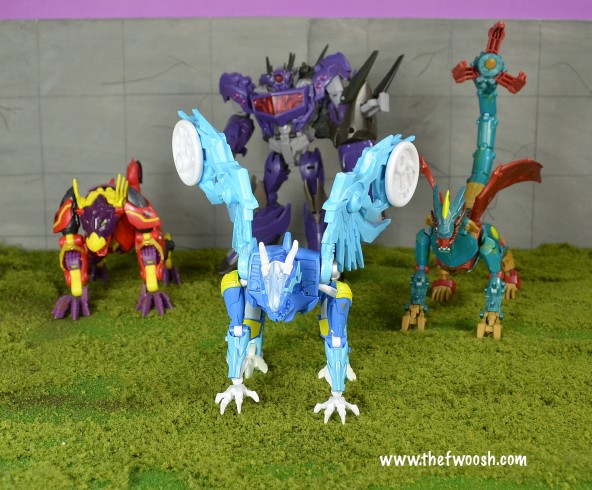 Of the three deluxe Predacos released so far, SkyStalker stands out the most to me so far, but that could be just because I’m extremely partial to his color scheme. Rip Claw is an awesome figure and is probably the “better” figure, honestly, but my eyes are drawn to SkyStalker every time. It’s gotta be the colors. Regardless, this is one pretty sweet group of robotic dragons we’re slowly amassing. This is definitely something new and unique in the Transformers universe and I can’t get enough of it. 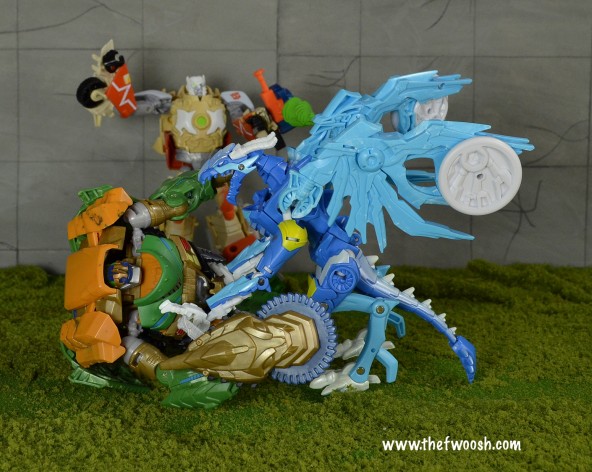 I imagine he’s going to be portrayed as being much larger on the show, but as the figure is now, he’s a decent match for the average deluxe Autobot, but the playing field may be a bit too equal. The Predacons should be big and dangerous and formidable, and SkyStalker looks like he’s probably about a match for any one Autobot, rather than a threat to them all at once. Maybe I’m wrong, though. We’ll have to see how it plays out on the show. 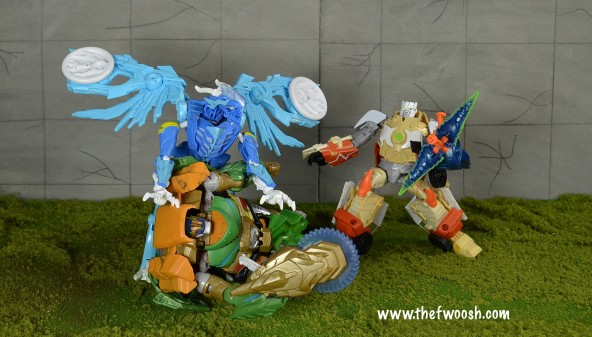 People are currently finding him at Target stores, but Big Bad Toy Store and Amazon both have him and his wavemates in stock currently. I definitely think he’s worth picking up because his dragon mode is among my favorites so far and he’s just fun to play with, so get yourself over to Target or hop on over to BBTS or Amazon and hunt down this beast for yourself!