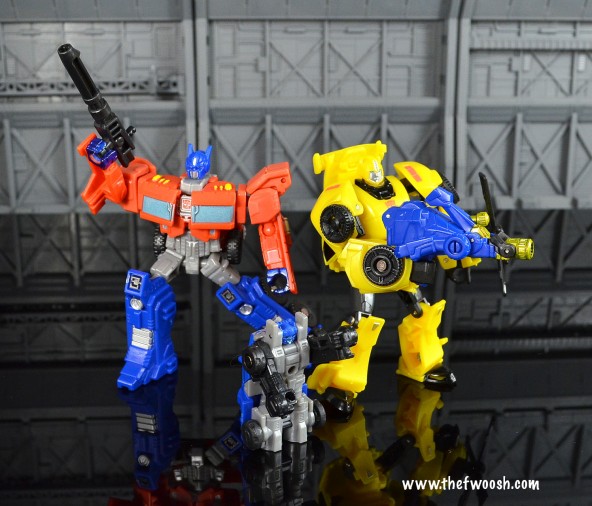 You can never have too many Optimus Primes and Bumblebees, right? Of course not! They’re two of the key anchors of the Transformers brand, and the latest incarnation of each comes to us hot on the heels of the wonderful voyagers Springer and Blitzwing as part of the Transformers 30th anniversary line. Unlike Springer and Blitzwing, however, Prime and Bee are in the much smaller legends scale and are intended to be in scale with the much-anticipated Metroplex figure coming later this year. I’m usually not the biggest fan of the legends scale and often skip them, but these two are worth a look because their design in based on their looks in the IDW comics. 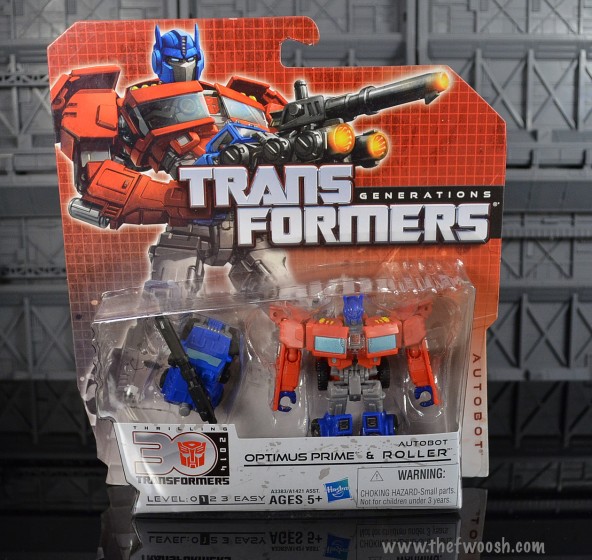 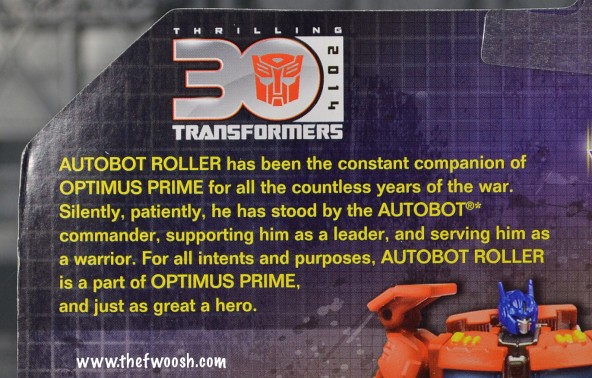 Their packaging is similar to the Autobot and Decepticon and deployer two-packs that are currently available at most retailers. These can also be considered “two-packs” since both Prime and Bee come packed with a companion of sorts: Prime comes with Roller, and Bee comes with Blazemaster. Now, Prime’s coming packed with Roller makes total sense, but Bee and Blazemaster? It sounds like even Hasbro knew they were going to have to somehow justify this pairing based on the bio we got on the back of the card. 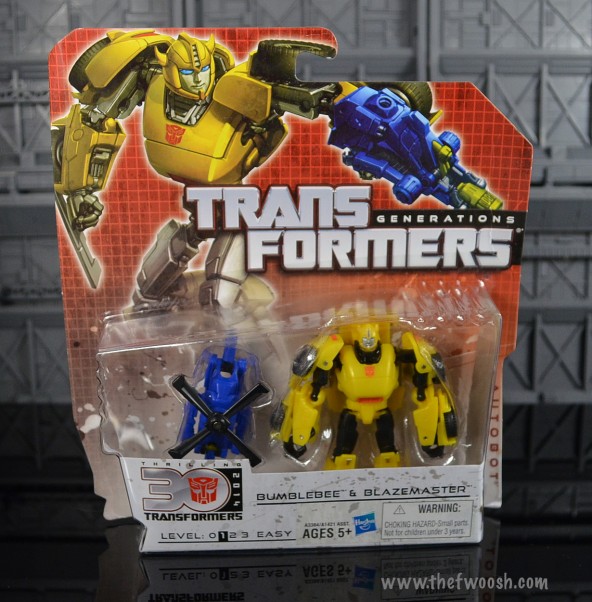 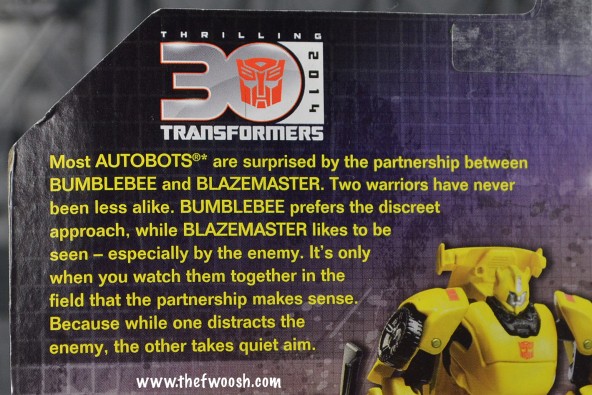 Even though they’re small and probably won’t fit in many collections, they’re still cool figures and are a lot of fun to play around with. Both are also great representations of their respective IDW counterparts, but the one thing that I know is going to drive me crazy is that they’re the same size. Maybe I’m a slavishly G1 purist (though I AM working on that), but I can’t help but be bothered by this. Prime and Bee can’t be the same size; Prime should tower over Bee, so these two being posed together is going to drive me nuts. And it’s unfortunate because I really like both of them on their own. 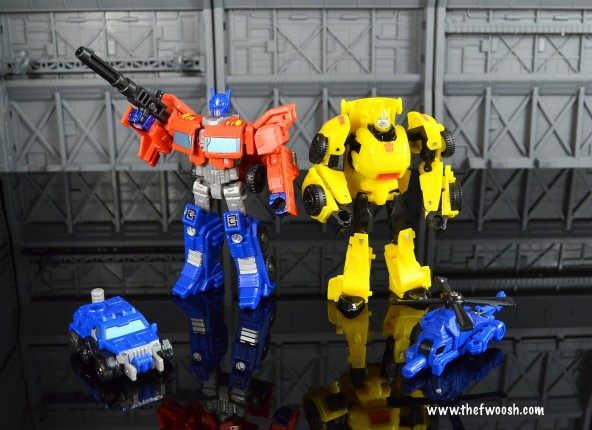 Their partners, technically, are triple-changers. I know, I know — but let’s face it: they are. They’ve both got three unique modes. They’ve got their vehicle modes, and it looks like Roller is some kind of SUV here rather than a random drone, and Blazemaster is the standard helicopter. Unfortunately, their vehicle modes are as good as they get… 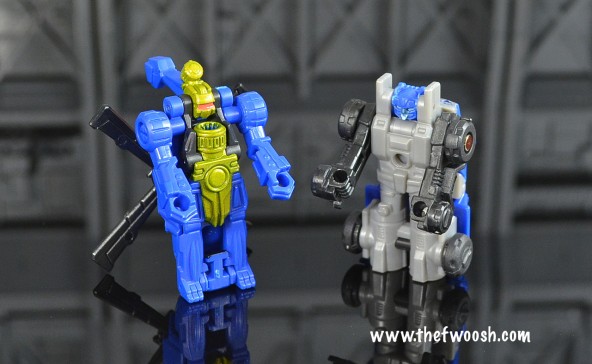 To transform them into their ‘bot modes, all you really have to do is stand them up. Blazemaster needs to have his head adjusted, but that’s pretty much it. There’s not much to them, so it’s best to not let your expectations get too high with these guys. As lame as their ‘bot modes may be, their third modes — their weapon modes — may be even lamer. 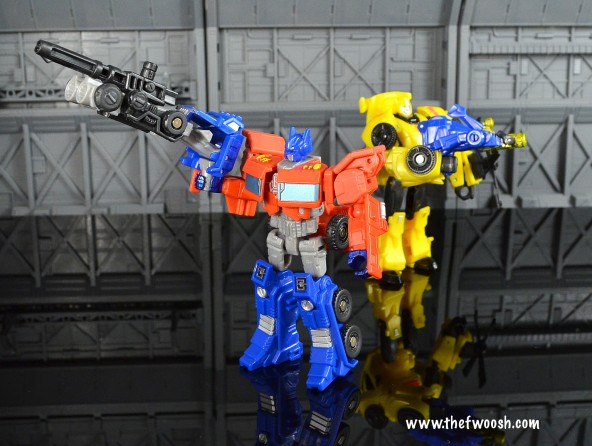 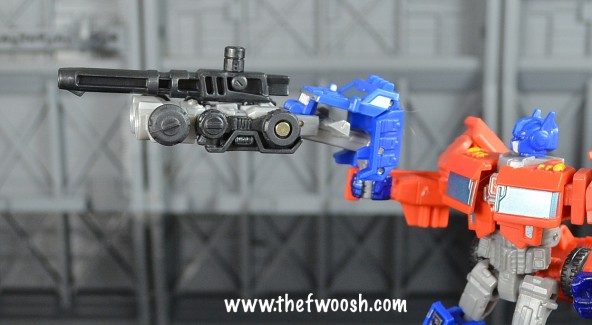 Both of them transform into humongous guns, especially Roller. And they’re both a bit ridiculous looking. I mean, I guess it’s neat that they can do this, but I’ll be honest here — I can’t see myself ever keeping them in this mode. Fortunately for Prime, this is not his only weapon option; however, in Bee’s case, this is his only weapon.

Prime can be displayed with his standard rifle, which looks way better. Bee isn’t as lucky. 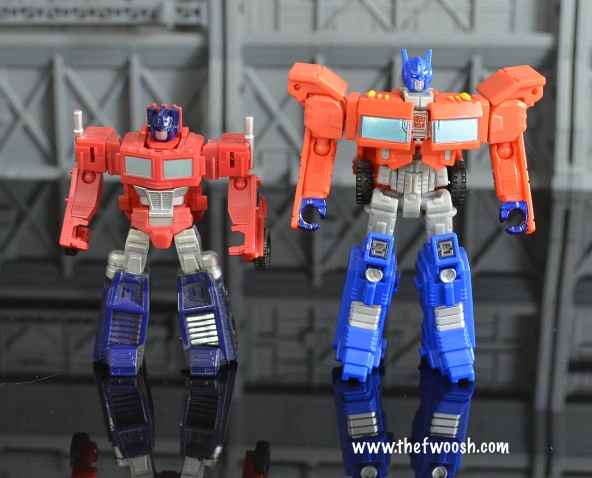 My one major nit with Prime’s ‘bot mode is his chest panels. They don’t lock in place, and they’re meant to be sightly ajar in order to display the Autobot insignia, but when his arms are moved the panels tend to move as well. It’s not a deal breaker or anything, but it’s definitely annoying. 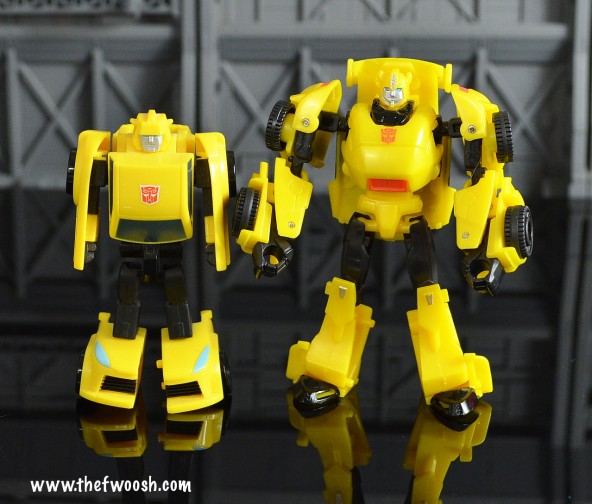 Both are considerably larger than previous legends-class representations of the pair, and I am thankful for that. Both have much more play value and are more fully realized action figures as well. Looking at these side-by-side pics really shows us just how far the legends class figures have come. In fact, these two are close to scouts in scale and size, so I’m not actually sure they’re technically legends figures, but legends is the name that gets thrown around the most in regards to these two, so I guess it’s best to just roll with it. The packaging isn’t much help in this area either. 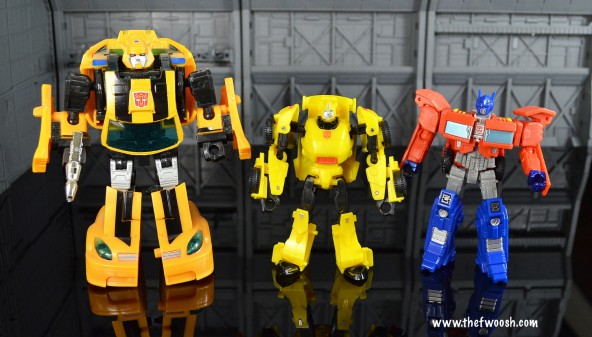 Here they are with a Classics Bumblebee, which is on the smaller end of the Classics line, so these guys are still pretty small despite being a bit large for legends figures. 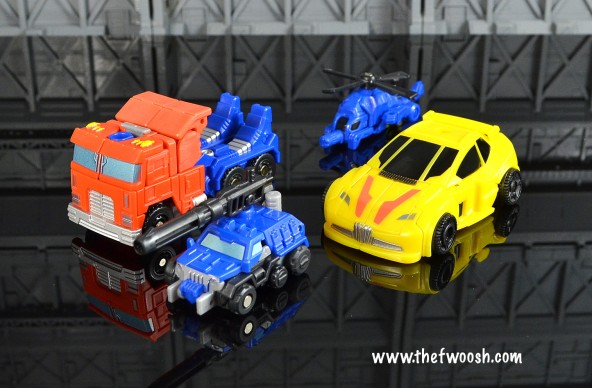 Their alt modes look nice and smooth and convincing, although this mode continues to highlight just how out of scale Prime and Bee are with one another, and let’s not even mention Blazemaster. As far as we’ve come with Transformers in terms of scale, these take us right back to the good (?) ol’ days when scale was all over the place. Again, individually they look great, but when they’re displayed together their shortcomings become more apparent.

If scale isn’t an issue for you, then you’ll likely love both of these sets. Both are a lot of fun and both are hopefully signaling a move toward more IDW designs in the Generations line. I have to admit, though, I am a bit bummed that both of these designs are only being released in the legends class so far. Both would do very well as a voyager and a deluxe, respectively, and hopefully Hasbro will get around to releasing them as such eventually.

I got my set from Amazon, but they’re also available from Big Bad Toy Store, and hopefully they’ll be hitting retail soon.