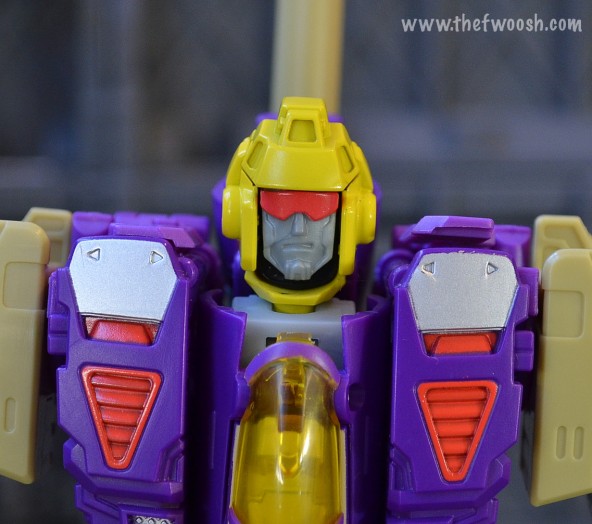 Let me tell you how awesome it is to finally be getting real, voyager-scale triple changers from Hasbro. This is something many fans had thought would never happen, but at this past Toy Fair Hasbro pulled this ace from their sleeve and wowed us all with a sneak peek at Blitzwing and Springer. As my buddy DisThunder will be happy to tell you, Springer is just about as good as it gets in terms of Transformers toys released at retail. He is truly the “belle of the ball,” so to speak, and is something fans have been clamoring for for quite some time. Blitzwing is no slouch either, however. Blitzwing is a good figure that has the unfortunate luck of being packed with a great figure, one that is definitely going to get the lion’s share of the attention. But while Springer may very well be darn close to retail Transformers perfection, Blitzwing isn’t quite as solid a release, but he is still one of the stronger figures Hasbro has given us in recent memory. 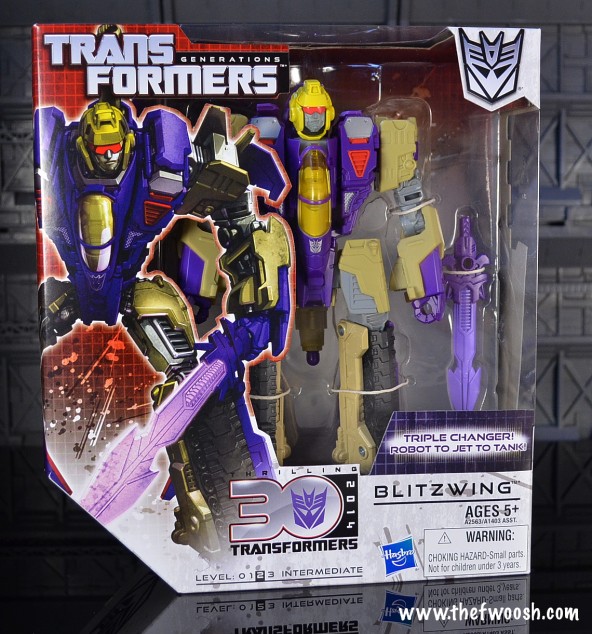 Let me tell you how great it was to see this box sitting on the shelf of a local Target. Blitzwing and Springer hit without warning and every collector in my area was scrambling to get their set. The box features artwork unique to the character and is emblazoned with the “Thrilling 30” graphic Hasbro seems to be using to celebrate the 30th anniversary of the line. 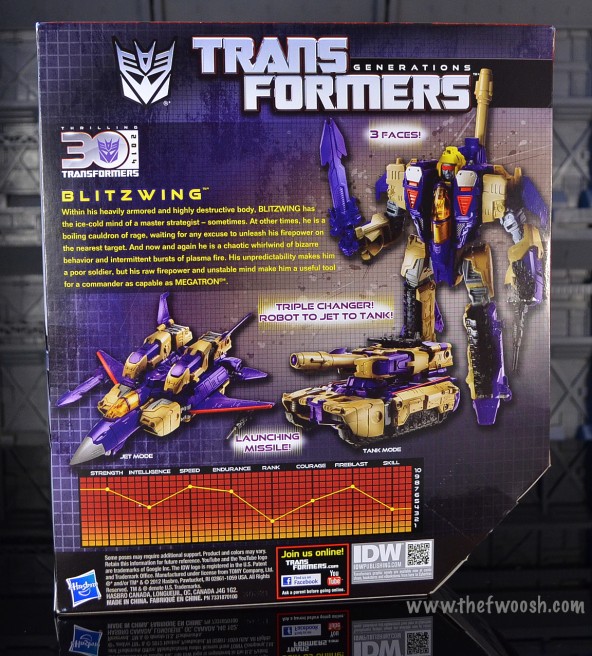 The back of the box features Blitzwing’s three modes, his stats, and a short bio. Pretty standard stuff for a Transformers voyager-class figure. One bit of information that was new to me was his skill level. I never knew he was so… lacking in that area.

His bio seems to hint at a certain personality disorder he may be afflicted with. I like how they don’t just come right out and say it. 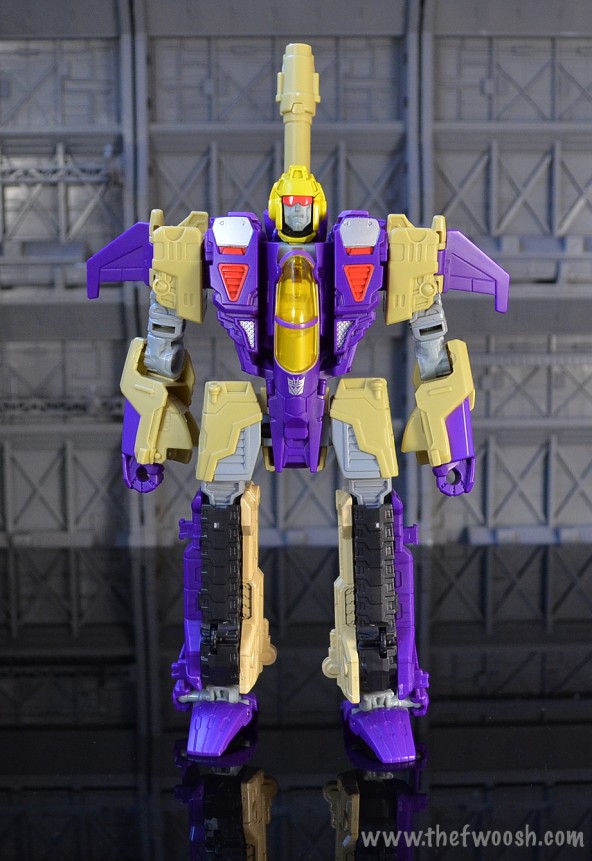 His ‘bot mode is everything I could want from an updated Blitzwing figure. It’s a great update of the G1 figure with some definite nods to his “Animated” design, giving us the best of both worlds in a way. His colors are perfect and his proportions are spot-on, so his ‘bot mode totally works. The face he’s sporting in the above pic is my preferred face of the three he comes with because I do have more of a penchant for G1 homages than I do anything else, but, as we’ll see later, all three heads are really cool in their own way. 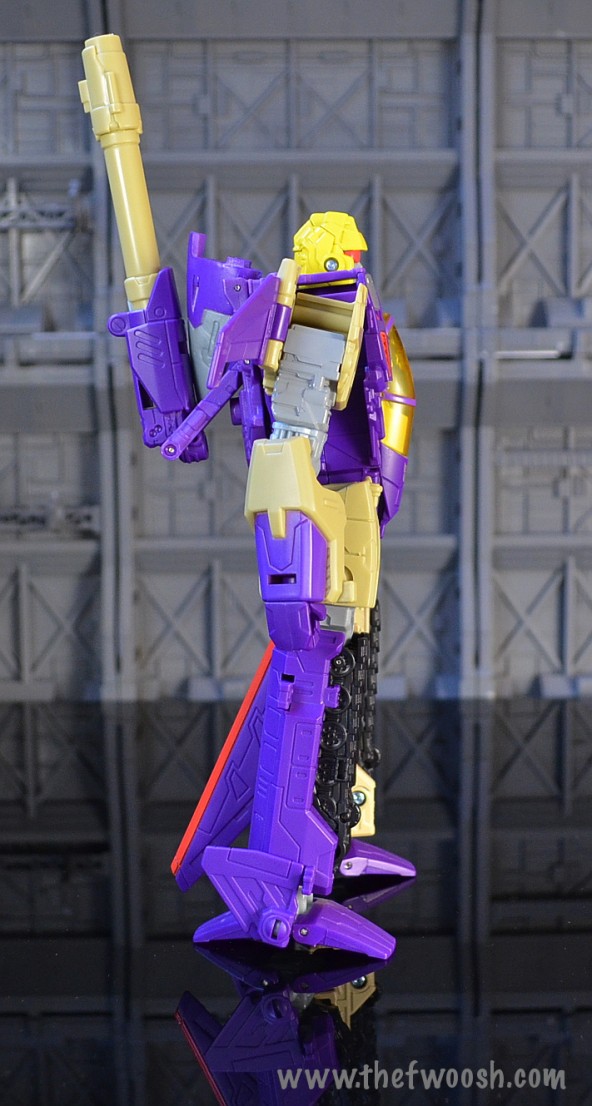 I’m not in love with how the cannon is slightly angled away from his body in his ‘bot mode, but that’s a small criticism since it doesn’t really take away from the figure in any significant way. 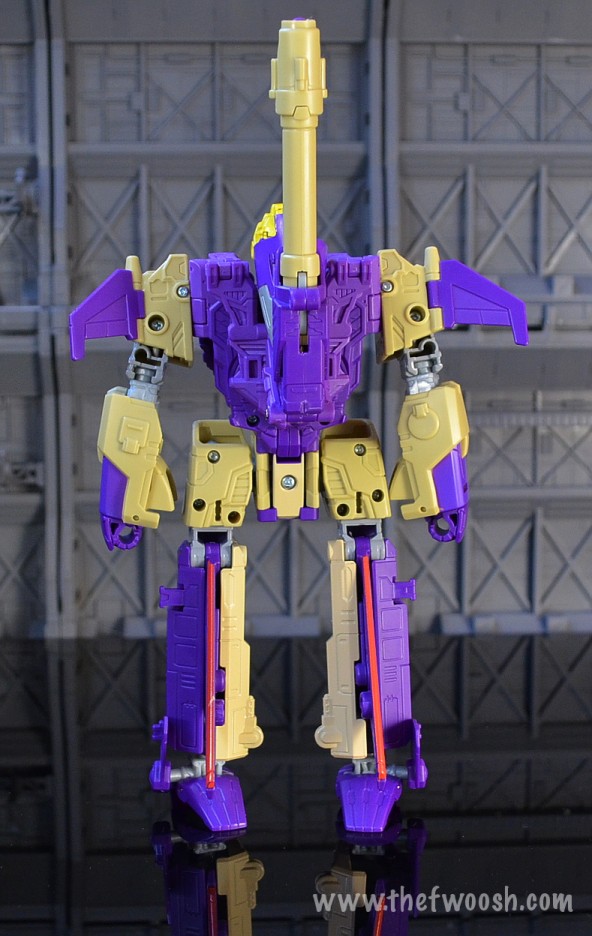 His back is just as clean as his front and doesn’t reveal any large hollow areas. They’re there, but they’re just better disguised on this figure, which is a very good thing. 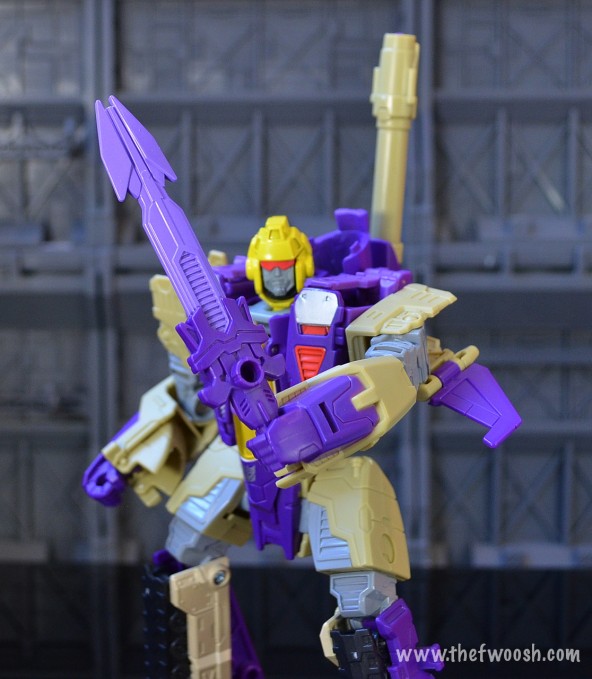 He comes with two weapons, the cooler of the two being his sword, pictured above. I like that Hasbro made the effort to give it two tones since weapons often get almost no attention at all in the detailing department. The lavender color of the blade and the darker purple of the handle work so well together. It’s really eye-catching. 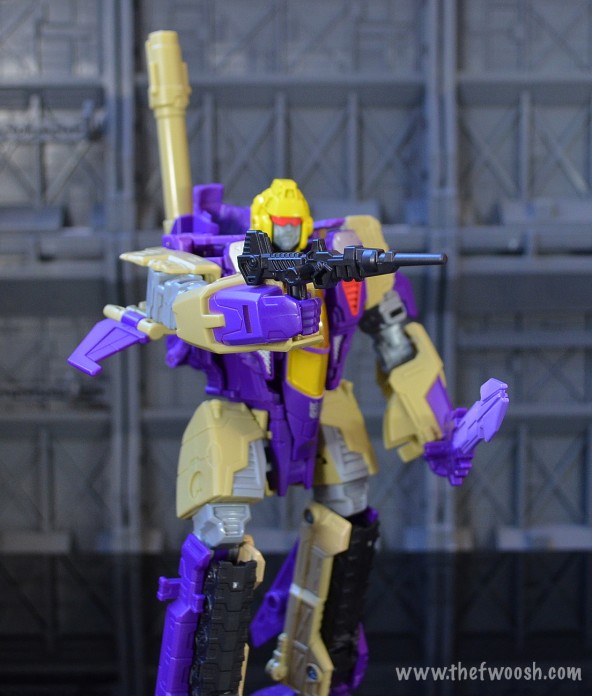 The gun is not as cool as the sword, unfortunately. It’s a nice sculpt, but it’s small and he really can’t hold it effectively. Plus, it looks like an ineffectual pea-shooter, something not worthy of Blitzwing. I guess when it comes to “formidable” weapons, his sword definitely wins. It’s nice that he comes with the gun, but I think he’s going to be relying on the sword more than the pistol in my display. 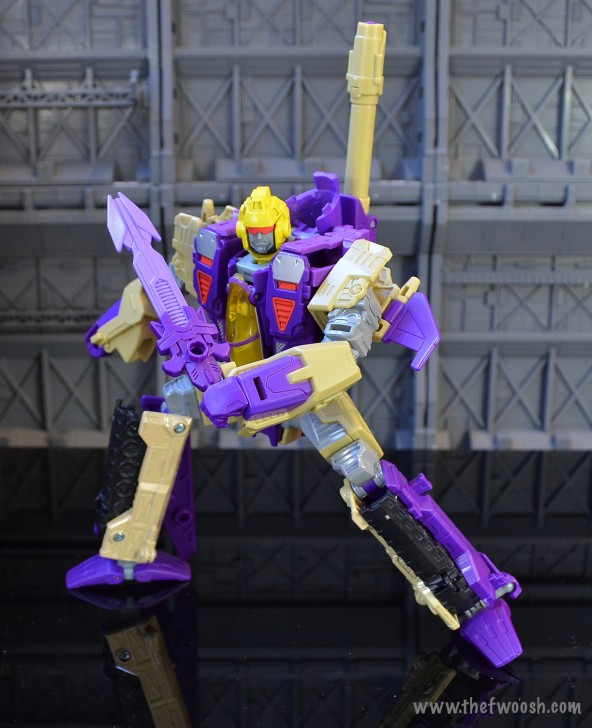 His articulation is where he gets a little finicky. He’s got all the standard and necessary articulation to qualify him as an articulated robot, but some areas don’t lock in as well as they should, and that makes for some tricky posing. And by “some areas,” I’m referring specifically to his shoulders. Every time his arms are moved, his shoulders move out of place and then have to be repositioned. There are some fan-fixes floating around out there, but none have really done the job effectively. Care just needs to be taken when posing his arms. Fortunately, once his shoulders pop out of place they are very easy to put back in place, but it’s the annoyance of having to fix this every time he’s posed that can get on people’s nerves. It’s not the best design by any means, but it sure looks pretty when he’s not being posed. 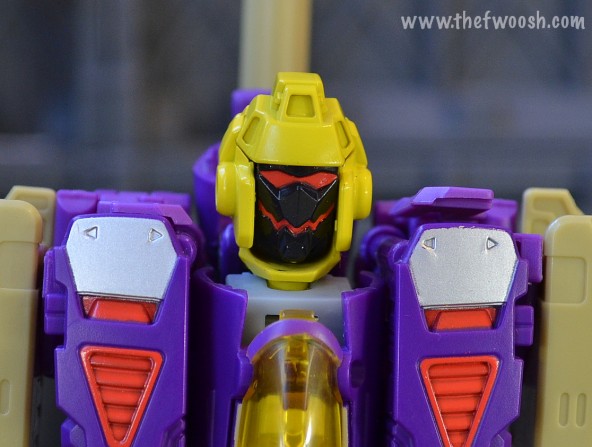 His strongest feature, I think, is the direct reference to his Animated character in his alternate faces. There are three options: the standard G1 face we saw earlier, the “jack-o-lantern” face pictured above that works when you want Blitzwing to go all crazytown on an Autobot or two, and the almost serious, sort of “Wing Commander” head he’s pictured with below. All three are cool and packed with personality, but as I mentioned before, I am partial to the G1 head because I admittedly have a bias in that direction. The faces can he switched by simply rotating each downward. It’s a smooth design. 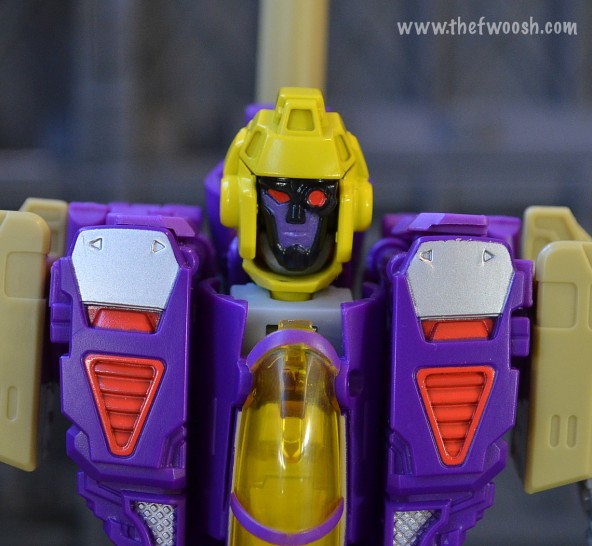 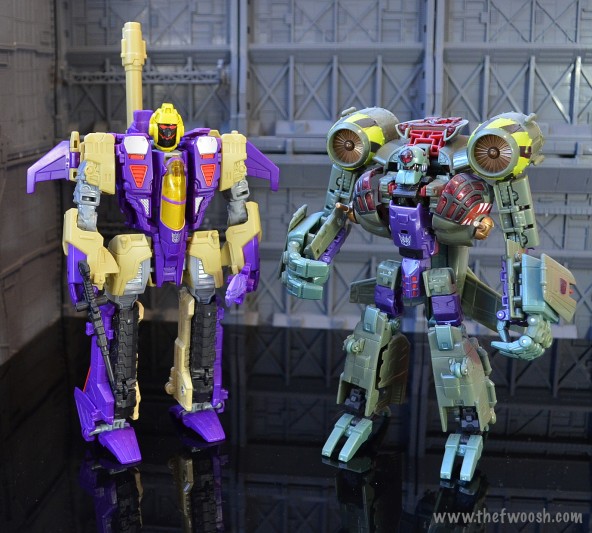 He looks great when posed with Lugnut, his pal and fellow alum from the Animated days. 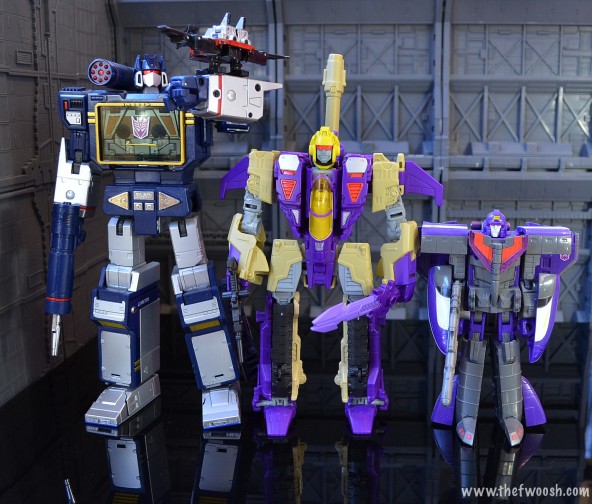 The above pic should give you a good idea of his size. He’s exactly halfway between a Masterpiece and a deluxe. And looking at this pic serves as a reminder of just how badly we need a new Astrotrain; he is now officially woefully undersized. 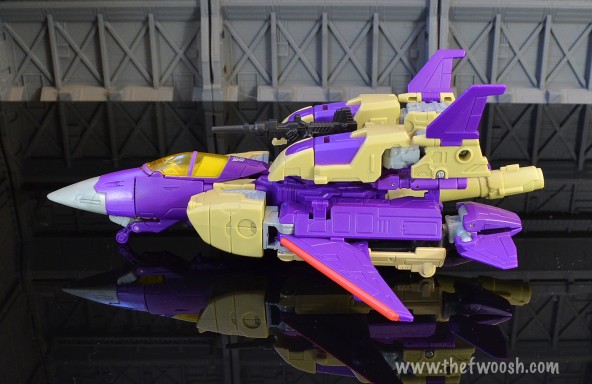 Now on to his alt modes. I have to say that neither of them are “perfect,” but they’re both a lot better than I was expecting from a triple-changer, and both succeed moderately well in representing the particular vehicle they’re supposed to. 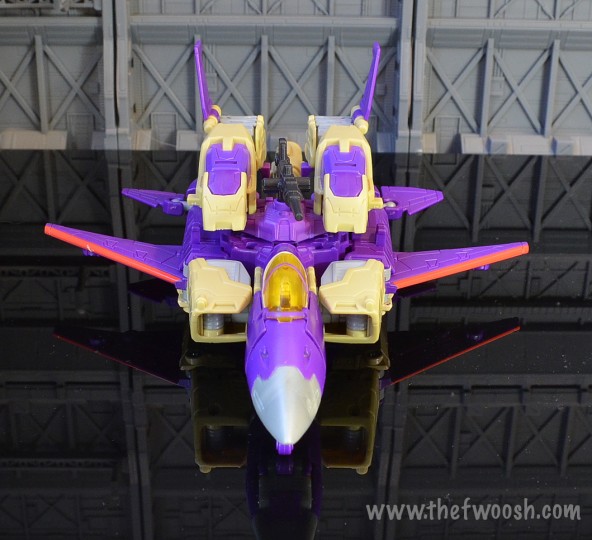 His jet mode definitely looks like a jet with a little bit of kibble on that top that actually ends up resembling the armor Jetfire packs in his alt mode. I like that it’s unique in appearance and won’t be confused with any of the Seeker jets. Anything that makes a Deepticon jet stand out is a good thing in my book because, heck, there is definitely no shortage of jets on the Decepticon team. 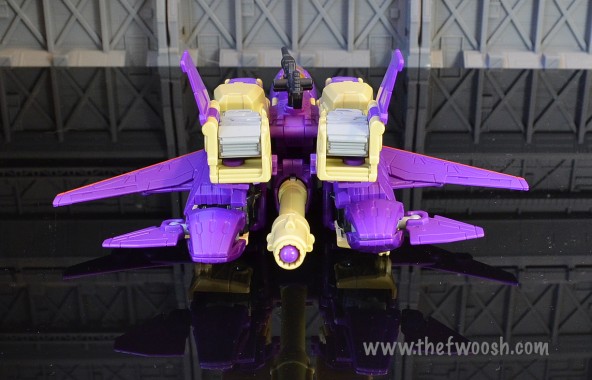 His cannon can be aimed from the back of his jet mode, like in the above pic, or it can be angled toward the front should the heavily artillery be more useful in that direction. 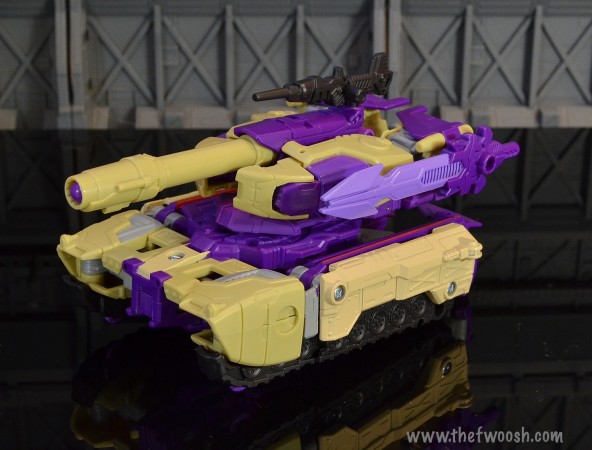 His tank mode is about as good as his jet mode, meaning it’s good, but not great. But at least it definitely looks like a tank and we don’t have to employ that “suspension of disbelief” nonsense while we try to convince ourselves that we see what we’re supposed to see. 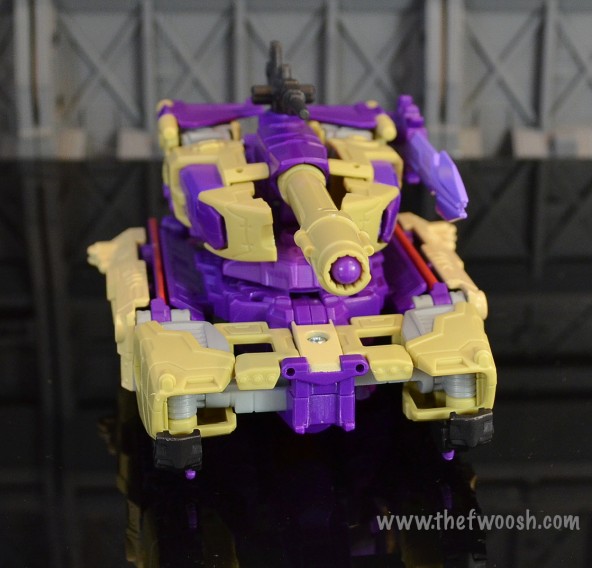 The rocket can be fired by pulling back on the shaft of the cannon. That’s how it really works. Where your mind takes that is your business, not mine. 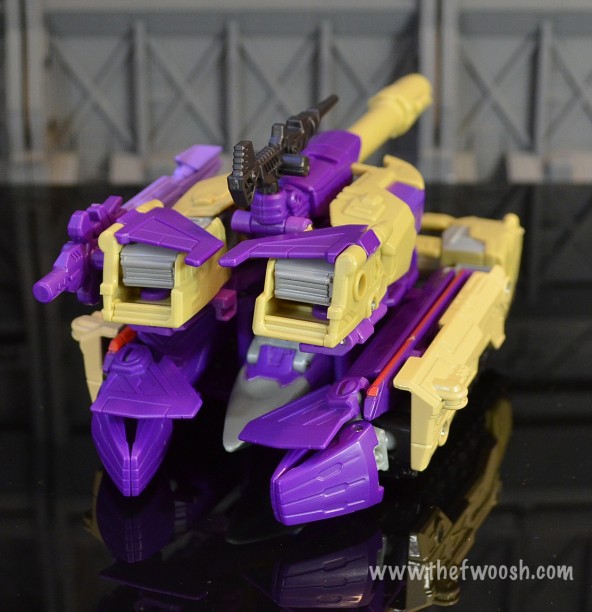 OK, so it does fall apart a bit in the back. This is definitely the weakest aspect of the figure, but given that there’s so much more to like about him, this is one of those things I’m willing to overlook because from just about any other angle, he does look like the tank he’s supposed to look like. So I can forgive this. Whether all fans will be able to do the same is a different story, however. 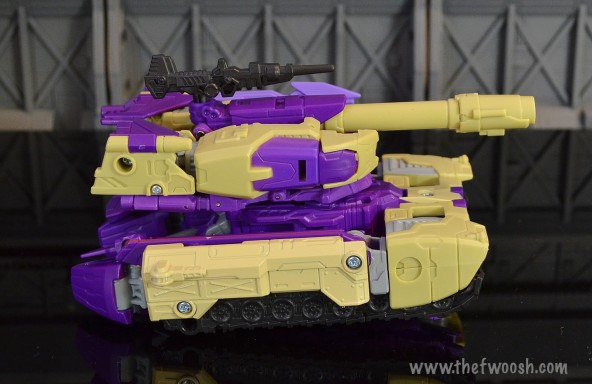 I think this works. It looks like a tank, so aside from a few tweaks that could help it, there’s not a whole lot more I could ask for. 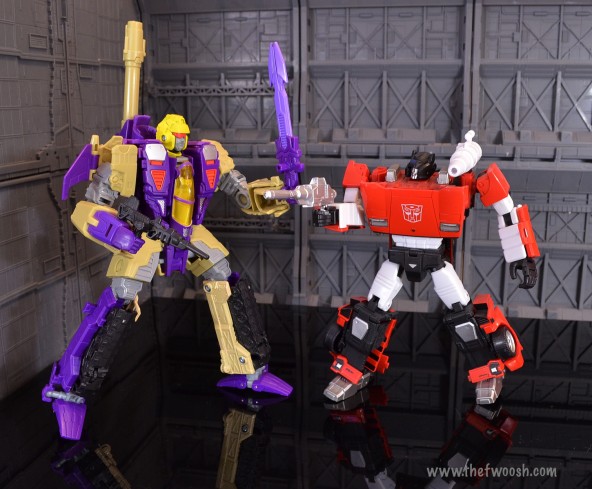 Blitzwing is a nice, big, beefy Decepticon warrior that can even go toe-to-toe with the Autobot Masterpiece figures, like Sideswipe pictured above. His size allows for some freedom in terms of display because he will look right at home in a Classics/Generations display as he is intended, or he can be fudged into a Masterpiece display. He’s a bit small compared to the Decepticon Masterpiece figures, but he’s a good match for the Autobots.

You get a lot of bang for your buck with this guy, and it’s not often that can be said these days with any amount of sincerity. I’m definitely pleased with him even though he does have his share of shortcomings. I know many of you out there will be gunning hard for Springer while you’re out there hunting, but don’t leave Blitzwing behind — he’s a good figure that’s actually a lot of fun to mess around with.

He’s popping up at Target stores right now, but if you don’t want to hunt, Big Bad Toy Store has him available for the same price Target is asking if you buy him as a set of two with Springer.