Hulk is a beast of an action figure in six-inch scale. Most of the Hulk figures stand at seven inches, sometimes less and sometimes more. In the Marvel Legends Fin Fang Foom wave there was Hulk, Hulk, and more Hulk. End Hulk and Mcfarlane Grey Hulk (or rare green version) are on the smaller end of Hulk figures. They are good figures but did not make the list, nor did the First Appearance Marvel Legends Hulk from Toy Biz. While I like First Appearance figure and think that they should always be on any list, I wasn’t able to include the grey or green version.

What makes a Hulk get on this list? There are a number of factors that I looked at. The first is, of course, does the figure look like Hulk? Is the representation so easy to see and identify as Hulk? Sure, big green and purple pants are easy identifiers, but I’m looking for the face, that look that brings out the Herb Trimpe or Sal Buscema or Mike Mignola or even John Byrne look and feel. Those are some defining artists for me that made Hulk, Hulk.

The other factor that makes a Hulk get onto this list is play factor, and by that I mean articulation. Going back to the Marvel Legends Hulks from the Fin Fang Foom wave mentioned before, they are good with really good articulation. But they don’t have enough pow in them to make this list. That isn’t to say that all the figures on this list are perfect. War Hulk and his variants all have those single-jointed knees that are always slightly bent, but they make up for that deficiency in other areas, for example some of the best ball-jointed hips; the balls fit perfectly into the crotch and seemlessly flow into the thigh. Probably the best ball joint execution on a Hulk figure today.

I have a love hate relationship with this figure. The figure looks like it was sculpted by three different people. The thighs and shins don’t match the sculpt of the rest of the figure. Sure sure sure he is wearing shiny pants, but even then the sculpting looks like it was done by two different people, makes it a mess. And that face-sculpt or hair or something is a mess. BUT! This is probably the single best-looking and best-working Hulk body out there. The overall scale and proportions, the joints, how they work and the texturing on the body all work. They work. And it is a good-looking figure. Throw some cloth pants on him and swap out that head and he’s aces. In fact, he’s so aces that he’s been reused twice, Planet Hulk and World War Hulk. 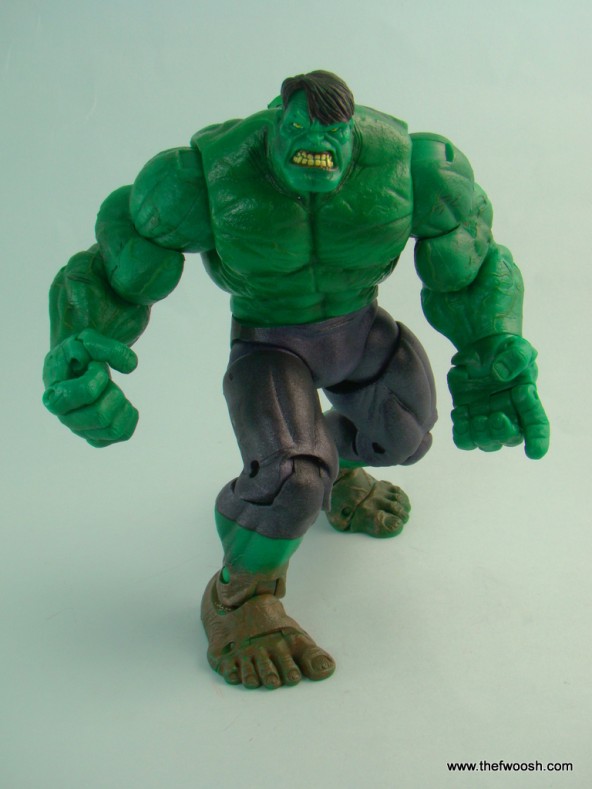 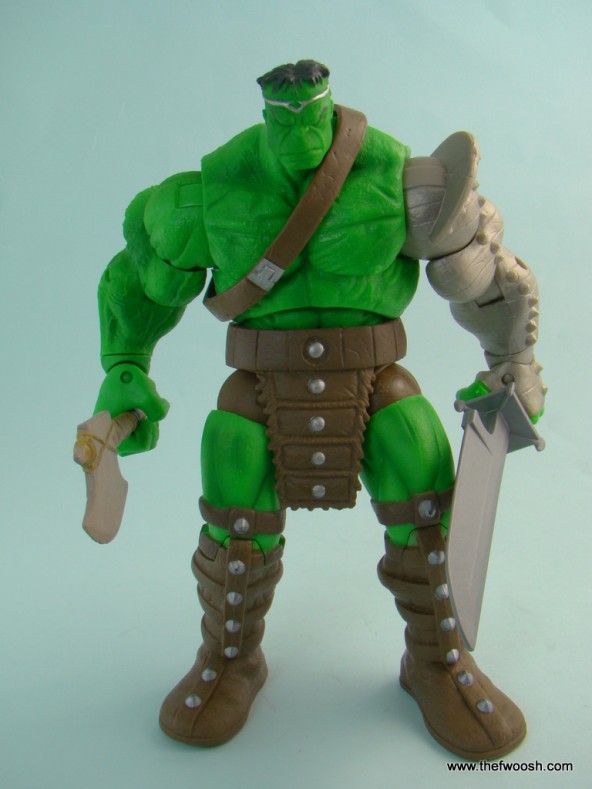 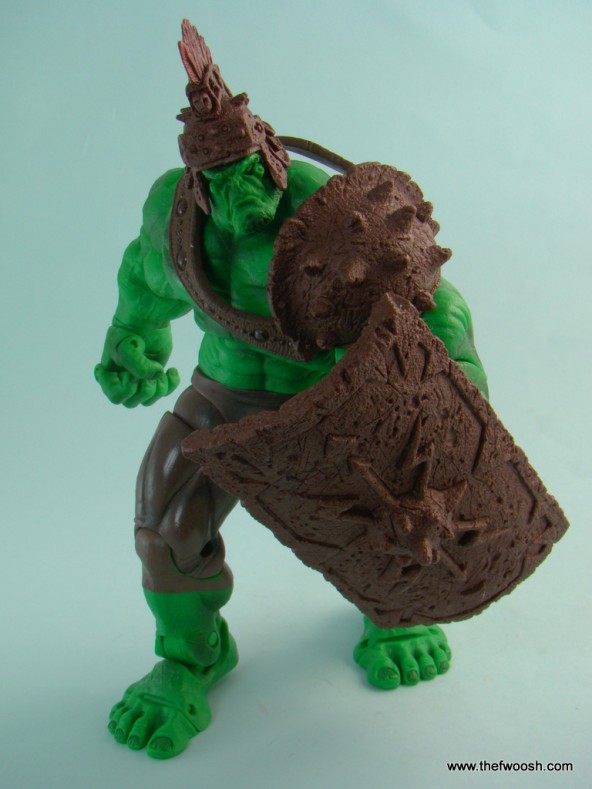 This was the first Hulk to come in a Marvel Legends or Hulk Classics wave. And while this figure is far far far from perfect, there is a lot of good in it. The head-sculpt is excellent. It really is one of the better head-sculpts to make the list. And the articulation is almost there. The rubber hands and then jointed hands — almost. The lack of a bicep swivel and ball-jointed hips really kill this figure. So much potential, specially with the sculpt. The sculpt is fantastic. From the front this figure still holds up against any Hulk figure out there. You can see the love that went into making this figure. While not perfect, this figure deserves a place on the list as it was the first Hulk in a Marvel Legends / Classics line. 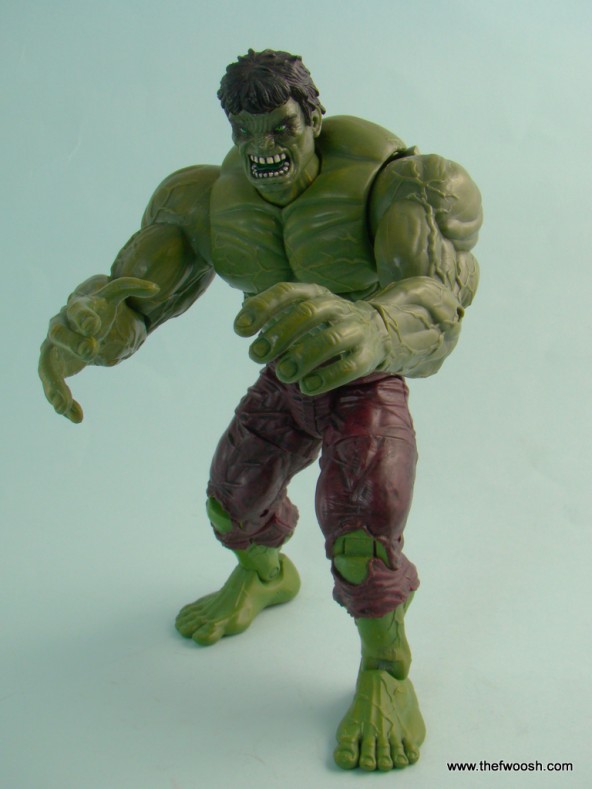 This Hulk was almost a greatest Hulk ever. The sheer bulk and size made this a fantastic figure. But the head sculpt and the hip joints hold it back. The head sculpt doesn’t really scream “Hulk.” There is a very vanilla aspect to it and it’s a small head in proportion to the body. And the hips employ the hippy-hinge system that just fails in every way. I don’t have anything good to say about it. In every way War Hulk excels in this department, this figure fails, which is really too bad! This hulk has everything else going for it, even with the vanilla head-sculpt. It is huge! Is has double-jointed knees, hinged ankles and rocker ankles, etc. etc. etc. It is one of the better Hulk figures. He even has sculpted pants. 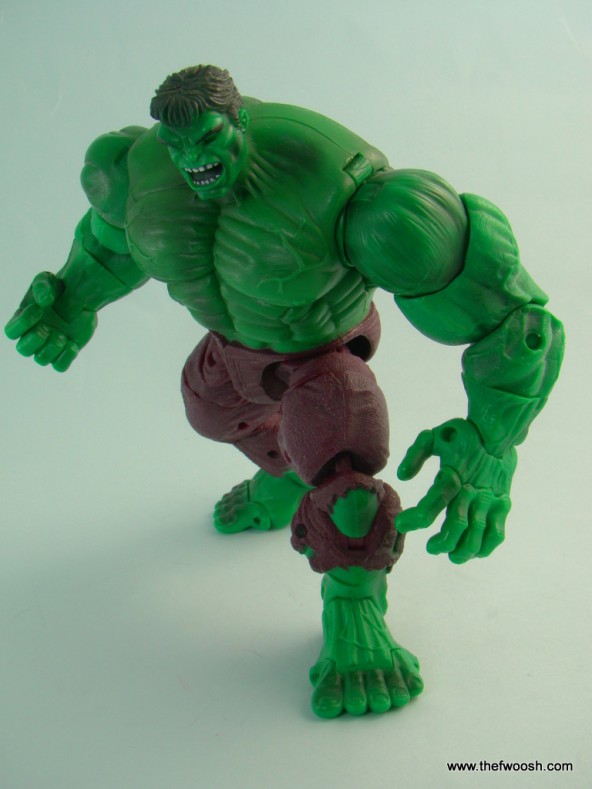 This is a great Hulk figure. And, in fact, many people mention this as the best Hulk figure. I almost agree. From an articulation view, it is perfect. It has everything that you want in a Hulk figure, everything like double knees and swivels in the right places! In fact, it is so good that it is too good. The only joint that might not work 100% is the ab joint, and somehow that is forgivable. Additionally, the sculpt is pretty damn good. This is a huge figure with veins popping out in the right places and muscles placed correctly. Even the head-sculpt has a bit of the Herb Trimpe look to it. Plus, he comes with Bruce Banner! This figure really does deserve the top spot, but there is one Hulk that trumps this one. 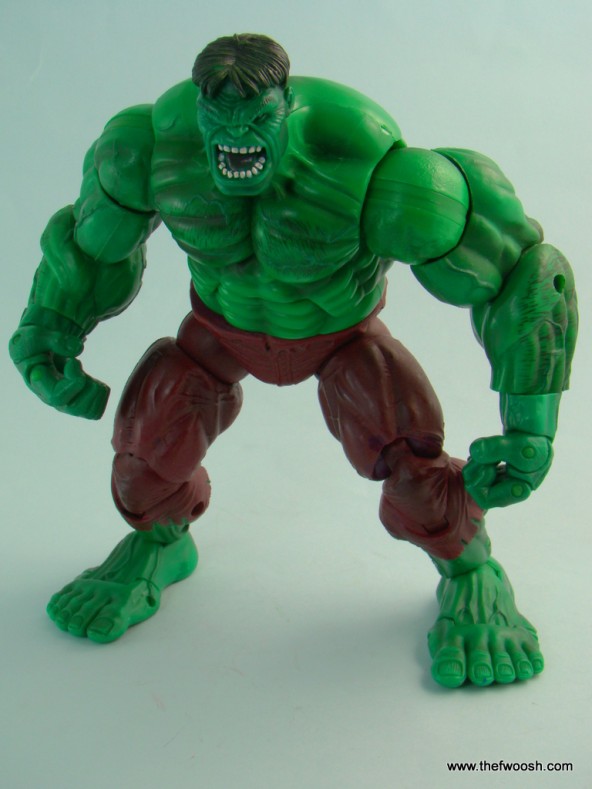 Quite possibly the best Hulk figure to date, if for no other reason than it looks like Sal Buscema’s art leaped out of a 1970s coming directly onto my desk. This is the Hulk that I grew up with as a kid. There is no question about it. The articulation is pretty spot on, but the ankles are overengineered and there is no ab joint, but holy crap! Just about everything else is perfect on this Hulk. Even the variant (screaming) head sculpt is amazing. Currently this Hulk sits in my Avengers display as THE Hulk! 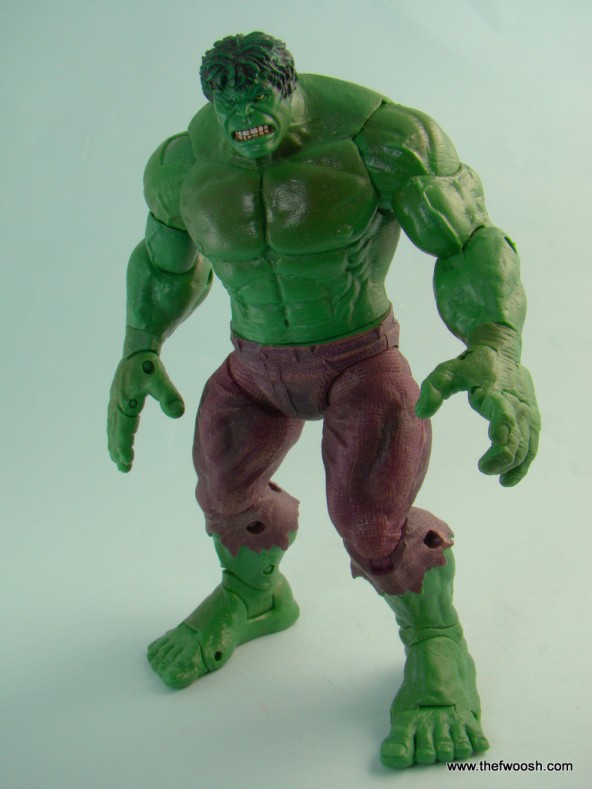 As always, you can continue the discussion on the Fwoosh forums: http://thefwoosh.com/forum/viewtopic.php?f=96&t=61501