Who doesn’t love a nice doggie? Well, cats don’t, I guess. And dogcatchers. And Hasbro. Well, obviously they don’t — how else would you explain the lack of a Lockjaw figure in Marvel Legends? Their anti-dog agenda is all too clear: they wasted no time making Hit-Monkey, did they? So where in the Sam Hill is our Lockjaw? 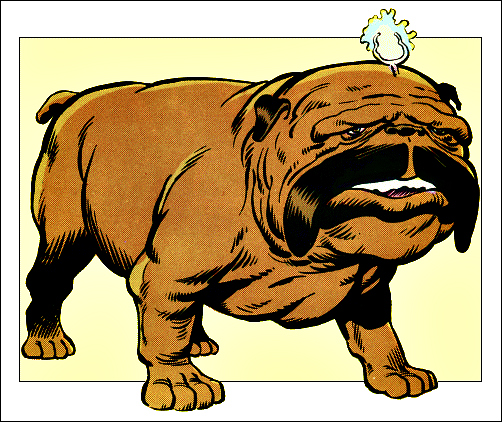 Lockjaw debuted in the pages of Fantastic Four v.1 #45. Created by Jack Kirby and Stan Lee, he’s the loyal pet of the royal family of Attilan, better known as the Inhumans. To make a long story short, the Inhumans are the ancestors of a tribe of cavemen that were genetically manipulated by the alien Kree for use as potential soldiers in their war against the Skrull empire. The Kree were forced to stop their experiments, and the surviving subjects went on to evolve into strange and remarkably advanced beings. In time these beings harvested the Terrigen Mists, a powerful mutagenic gas, which further accelerated their already divergent evolutionary growth. For centuries they lived in secret, until coming in contact with the Fantastic Four. So much for making a long story short. 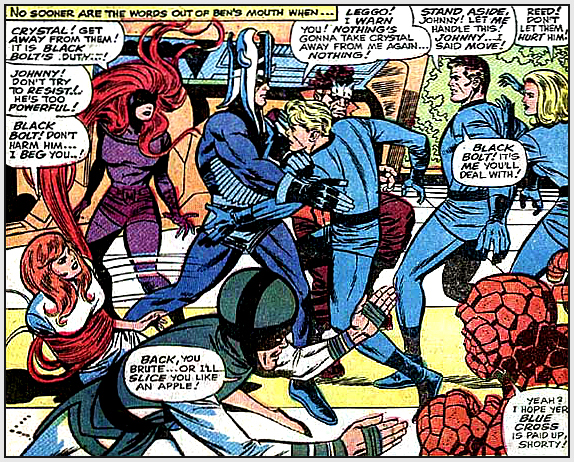 In the trademark Mighty Marvel Manner, the FF clash with the Inhumans until they discover they’re on the same side. We meet the whole gang: Crystal (hot chick), Gorgon (horse guy), Triton (fish guy), Karnak (kung-fu guy), Medusa (other hot chick), and Blackbolt (their king). Obviously I’m not gonna tell ya the whole story here — it’s far too complex a tale to sum up in one column, and Kirby and company already did it better than I ever could. If you’re not familiar with the astonishing origin of the Inhumans, do some reading: pick up Marvel Masterworks Fantastic Four v.3. It reprints issues #41-63, plus Annual #3 — plenty of Inhumany goodness awaits you, True Believer! Lockjaw is Blackbolt’s “pet,” although that word doesn’t really do their relationship justice. While he may look, act, and smell like a dog, Lockjaw is actually far more than that. Though his origin is shrouded in mystery (indeed, it is believed to be the Inhuman’s darkest secret), some say Lockjaw may have originally been an Inhuman, only taking on his canine appearance after exposure to the Terrigan Mists. And while he doesn’t usually speak, he’s shown that he can “…when he has something to say.” He’s clearly more than he seems. As far as powers go, Lockjaw has the ability to transport himself and other people or objects considerable distances. Lockjaw also possesses remarkable durability and strength, in one instance incapacitating the Thing by clamping his jaws around the hero’s arm. He also likes to play catch. 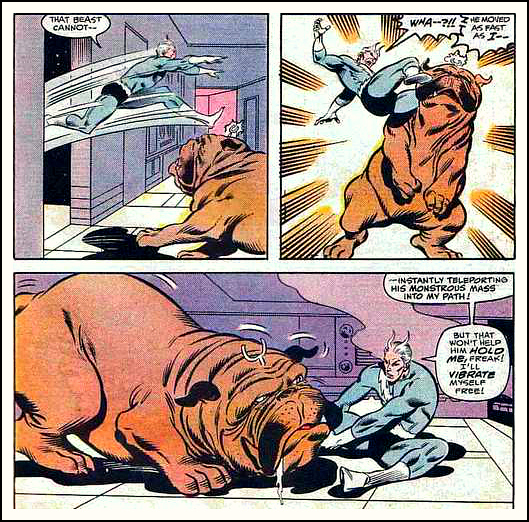 Go on, Norrin, throw it for him. He loves that.

Lockjaw is pure Kirby, all heavy blacks and bold, dense lines. His design was instantly iconic: the huge, soulful eyes, the panting mouth, and the tuning fork on his forehead all combined to make a one of the most visually distinctive characters of comics’ Silver Age. Entire panels could barely contain him, not only because of his size, but because of his presence. When Lockjaw showed up it meant something was about to happen, and while he never sought trouble, he never turned away from it, either. Naturally curious, utterly tenacious, absolutely loyal — a bit like Kirby himself, really. And while heroes like Aquaman had been featured with pet sidekicks in the past, the world of comics had never seen the likes of Lockjaw before. 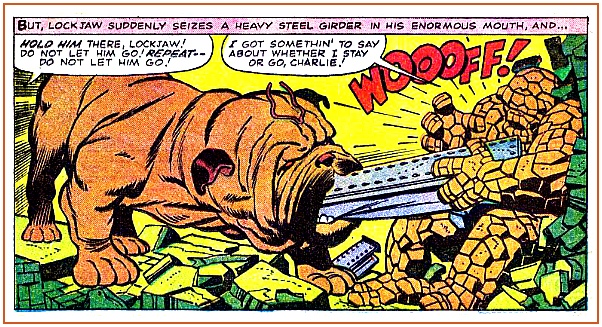 Lockjaw has saved the world on more than one occasion. He’s exhibited understanding and intelligence far beyond that of a dog (and most of the residents of the Marvel universe, to boot.) His canine appearance and choice to remain silent often cause foes to underestimate him; on more than one occasion he’s been dismissed by the villain, allowing him to turn the tables in our heroes’ favor. He’s smart enough to know not to speak; his keeping it a secret puts him at a tactical advantage, one he’s willing to exploit. Readers will quickly discover it’s not in Lockjaw’s nature to be violent; he uses his intellect to solve problems more often than his considerable strength. He’s proven himself countless times to be a fearless, faithful, and loyal companion who has been present for some of Marvel’s greatest adventures. No wonder everybody loves him. Lockjaw gets around. Sure, he spends most of his time with his fellow Inhumans, but when you can be anywhere you want with a thought, the entirety of the Marvel Universe is your back yard. Makes finding buried bones kinda tough, though. Lockjaw has been known to hang out with Ben Grimm, Spider-Man, and the Pet Avengers. Here, ol’ Web-Head lies to some children about his powers. 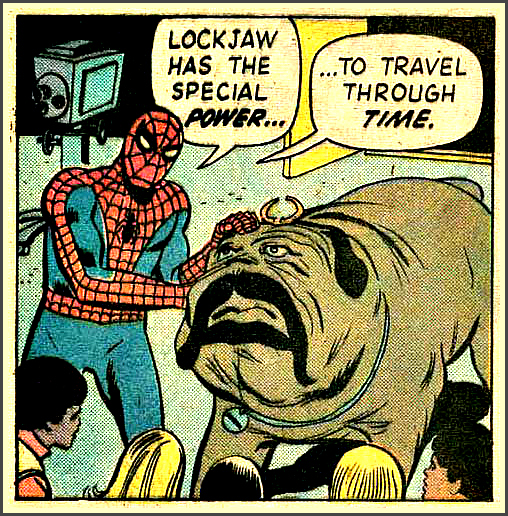 Since when? What the hell, Spidey?  Looks like the Jameson guy was right about you, after all. Even Lockjaw looks pissed!

While Lockjaw has never been a licensing dynamo, he has appeared on a handful of products. He’s had a Minimate, a Heroclix, and a Bowen Designs mini-bust, but my favorite piece has to be this Slurpee cup. Yeah, he’s sharing it with Crystal, but we all know who there real star here is. Lockjaw obviously deserves a place in the Marvel Legends lineup. I can think of nobody better suited to illustrate the point than the Fwoosh’s very own Discogod and his custom Lockjaw! Created for CustomCon 34, Disco brings Lockjaw to life with a process Doctor Frankenstein would have been proud of. Created using a morgue full of arms, legs, and feet and crap-ton of Apoxie and Milliput, the Lockjaw figure features ball-and-socket feet and torso, swivel shoulders, hinge knees, and a swivel/hinge neck. I absolutely love the facial sculpt on this guy. When I think of Lockjaw, this is what stares back at me. It’s pure Kirby — a better compliment I cannot pay. Lockjaw would be the perfect choice for a Build-a-Figure. He’s a beloved character with a great look and a 48-year history. He’s certainly strong enough to anchor a wave or two: if we got some other Inhumans out of the deal, fans would really respond. Honestly, it’s a no-brainer. How many big characters are even left to do? And before you start composing your lists, lemme stop you — none of those characters are as cool as Lockjaw. I mean, look at the size of this article! I could go on and on. I could even pander with sexy pictures: But I don’t have to do that, do I? You’re convinced — now we gotta get their attention. How about it, Hasbro? Make My Mutt! Could the rest of the Pet Avengers be far behind?