I’ve forsaken my roots, Marlena thought as she stood in front of Grayskull. She looked up, and up, to the parapets and beyond. The starfield above held none of the Greek or Roman myths of her youth. Orion didn’t pull his bow in the skies above Eternia. But stars were stars and she felt at home under these.

She had been an adventurer once, from a child dreaming of space, to an adult that soared beyond boundary. But some part of that had been lost to her once she became a queen and a mother on this strange and wonderful world. Sometimes she missed it, other times she was content. But the disparate versions of herself warred inside her often: Queen, Captain, mother, wife, duty, loyalty, freedom, and adventure.

Grayskull stared stoically beyond her, into the black forests at her back.

Randor would be furious if he knew that she had taken no guards with her. But he was away on one of his royal meetings with a minor lord or two, and a single Wind Raider taken in the middle of the night wouldn’t be missed.

The jawbridge creaked, as if the skull on the castle’s façade coughed, and then the mouth gaped. The jawbridge lowered itself to the ground in front of her.

Marlena stepped onto the tongue and entered Grayskull.

The woman she had come to see was waiting inside. 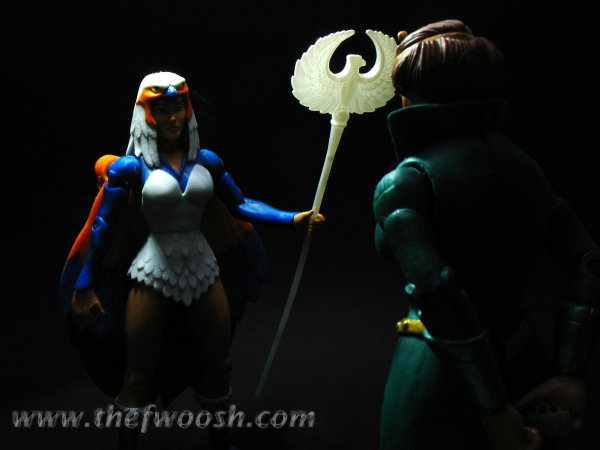 The Sorceress bowed deeply. “My Queen. I am honored.”

Marlena smiled at the sorceress, who radiated light into the shadows of this ancient castle. “Please, I am no queen tonight, only a citizen of Eternia that owes you her thanks.”

The sorceress tilted her head, spread an arm, and gestured Marlena further into the castle. “I’m sure no gratitude is necessary.”

“You saved my life,” Marlena said as the jawbridge closed behind her, swallowing her whole. “That night when my life changed it could have ended, but you intervened.”

The Sorceress turned slightly, and gave a small, soft laugh.

“When did you realize?”

Marlena followed the Sorceress to the throne room of Grayskull. This was vastly different than the throne room of Eternos: older, mustier, and sturdier. There was no ornament here. No finery, nor delicacy. This was a hard place, and the throne seemed unwelcoming. Marlena wondered what type of King had been seated there. She wondered if a king would ever sit there again. 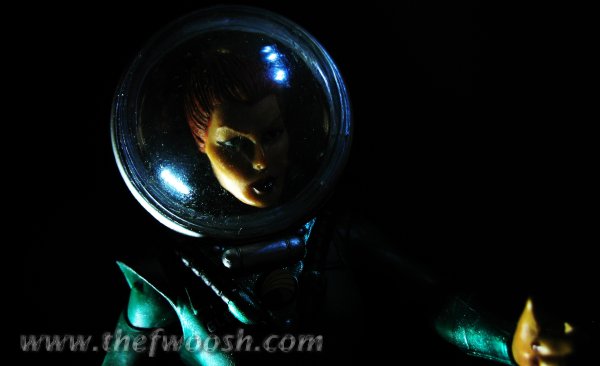 “Not for a long time. I think about that night often, but most of it is a blur. I’d remember… bits. I’d wake up shivering, sometimes screaming. I remember space shredding in front of my ship. Stars like mischievous fireflies, exploding around me. I remember my Photog unit’s alarms blaring while he continued to capture the footage. The early-warning system on his chest was at a full run. My controls had stopped responding. I knew I wasn’t supposed to travel that far out. As it was, I was risking serious reprisal, but I was reckless, even then. I had every assurance built into the ship, I had Photog, I was safe.” 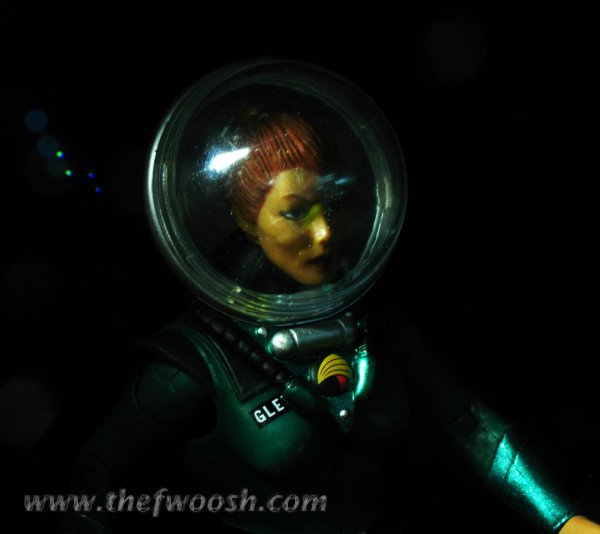 Marlena shook her head. “It feels like I’m talking about a different person. Eternia has given me so much, but sometimes I wonder how much of Captain Marlena Glenn I had to leave behind in order to become Queen Marlena of the House of Randor.”

“I know of sacrifice,” the Sorceress said softly. Marlena looked up and caught the woman in the seconds between the stoic, aloof resolve she wore like a funereal shroud.

Marlena was going to reach out and touch the woman’s arm to offer the smallest of human contact, but the Sorceress had already steeled herself and the moment had passed. So Marlena continued.

“My ship was dead as it came through that… portal or whatever it was. I was as good as dead. I was hurtling to the ground at impossible speeds. When I woke, my ship was in pieces, scattered around me. I should not have survived. But I did.”

“Eternia is a land of miracles,” the Sorceress said, supporting her frame with her staff. She looked tired, but her eyes burned with clarity.

“So I’ve seen. There was so much I couldn’t explain, so I didn’t try. For the longest time I didn’t think about it, and figured it to be a miracle, and accepted it. Until I met He-Man.”

There it was. Marlena caught the flicker in her eyes. The Sorceress looked away, trying to hide it, but it was there. Recognition. “He-Man?” she asked, to deflect.

Marlena continued. “I’ve seen He-man on more than one occasion. Eternia’s greatest champion has had numerous opportunities to be called in front of the throne. And for a while, I saw what others saw:  a handsome man, one who exuded power, but those are in no short supply on this world or any world. But then one day, I saw beyond “He-Man” and saw through to the man. I saw what Eternia doesn’t see.”

The Sorceress did not blink. “What did you see?”

Marlena walked to a window, and stared out over the lands that Grayskull rested upon. “It was as if I were seeing two men. One overlaid onto another. I saw the hero, handsome and charming and brave and ferocious in his loyalty and his dedication. And then, as if looking at a face beneath the water, I saw the other one, the true face.” Marlena turned back to the Sorceress. “It is the face you see, and maybe a few others. Duncan, I suspect. The King does not see. But he wouldn’t. He couldn’t. I think… I think only a mother would see what I saw.”

“I saw that He-Man has his father’s eyes.”

The Sorceress was very quiet. Grayskull matched her silence. Finally, she smiled. “He-Man is many things to many people: an ideal, a hero, a myth, a warrior, a savior… such a burden for one man to carry. Few could shoulder that burden, could have the strength needed to bear that great weight. You should be proud.”

“I am,” Marlena said.”Once I realized the truth, I knew that there was only one explanation for my being alive today. Eternia needs He-Man. He’s part of this world’s strange, wonderful destiny, and I’ve learned destiny is very important to Eternia’s history. And you are the caretaker of that destiny. And I, in my own small way, was a part of that destiny. It wasn’t hard to connect the pieces. So I thought it was time to offer my gratitude in person.”

The Sorceress shook her head. “I appreciate your words. But I require no gratitude. I am only a servant to a grand design, as are we all. Your destiny did not end that night, My Queen. You still have stories to tell.” 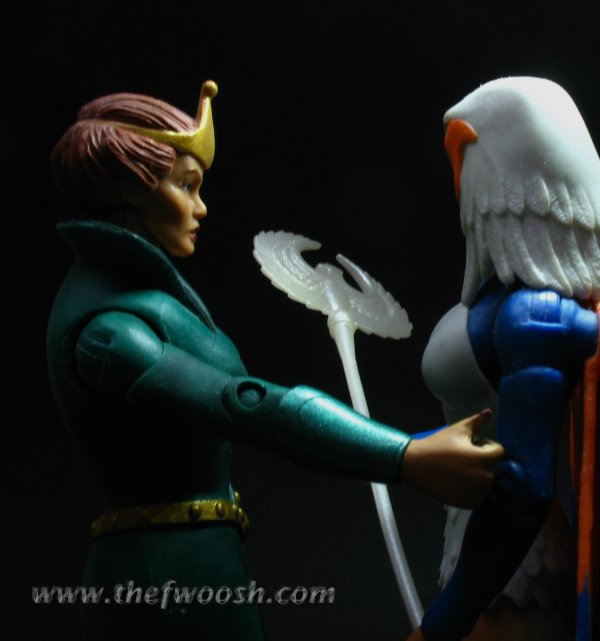 Marlena took a step forward and placed her hand on the enigmatic woman’s arm. “You have my thanks anyway.” She gave it a squeeze. “Now I’m afraid I must get back or the royal guard will send out a brigade.”

The Sorceress bowed again. “It was a pleasure and an honor, my Queen.”

Marlena heard the jawbridge trundling open. “Oh, and if it’s not overstepping, I must say, Teela is a remarkable woman. She does the Palace proud. A fine warrior, a fine woman, and a fine person.”

The sorceress hesitated. Marlena smiled, and gave a small nod. In a soft voice barely audible even in the silence of the castle, the Sorceress said “How did you know?”

“Because she has her mother’s eyes,” Marlena said, and took her leave.