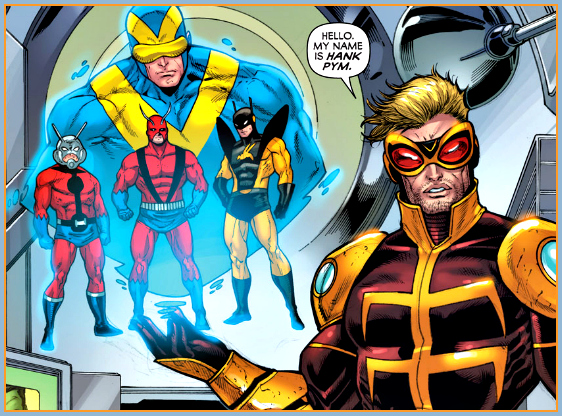 There are few characters in comics as divisive as Henry Pym. You either love him or hate him — there doesn’t seem to be a lot of middle ground. Personally, I’ve always been a fan. It’s not always an easy admission. Thanks to some exceptionally poor editorial choices made in the early 1980s, Pym’s reputation as both a hero and comic-book character seems to have been damaged beyond repair. Despite several attempts to rehabilitate him, he remains a difficult, almost unmanageable concept for his writers and parent company. Today we start our look at Doctor Henry “Hank” Pym. All seven of him. Will there be toys? You know it, True Believer!

Henry Pym first appeared in Tales To Astonish #27, January 1962, just a month after Fantastic Four #1 hit the stands. It was the dawn of the Marvel Age of comics — and Pym was already out of step with it. Y’see, Tales To Astonish was one of Marvel’s “Monster of the Month” books that the company had been churning out since the mid-1950s. Safely within the limits of the recently-passed Comics Code, the books were sanitized affairs, featuring bland and interchangeable protagonists battling the likes of Gomdulla the Living Pharaoh, Dragoom the Flaming Invader, and Zzutak the Thing That Shouldn’t Exist!! While the titles sold well enough to continue publication, there was no doubt Marvel was in a bit of a rut. Fantastic Four #1 broke that cycle: it was the beginning of something new for the company. It’s combination of out-of-this-world story concepts and down to earth characterization made it stand out among the dozens of other comics released at the time. Henry Pym’s debut, on the other hand, was just another seven-pager about a mad scientist and some ants.

Ah, yes. Batshit-crazy right out of the gate. If nothing else, ya gotta admire the man’s consistency — he sets the standard early and sticks with it to the bitter end. In a pique, Pym doses himself with his new experimental shrinking compound, and, wouldn’t you know it, everything works out fine. 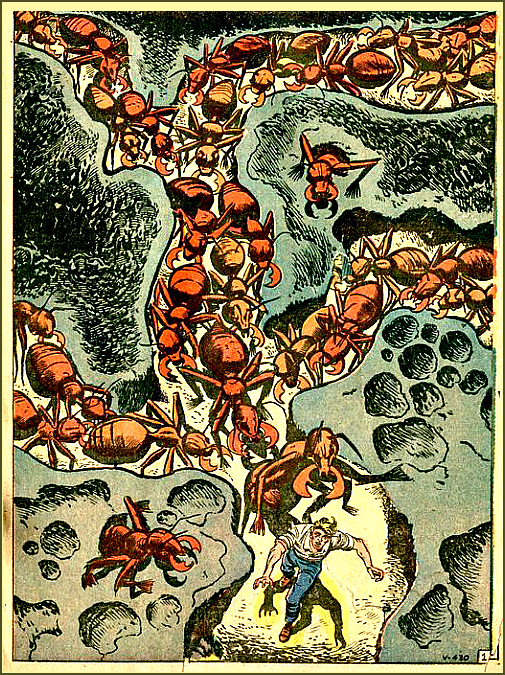 Er, more or less. Were there some bumps in the road along the way? Of course. Did things look darkest before the dawn? Always. Did Hank Pym judo an ant? Oh, you know it.

Pym managed to extricate himself from the anthill and resumed his normal size and life. He destroyed his findings, vowing to return to “practical projects” like inventing non-nutritive food additives and miniaturizing the atomic bomb. That would have been it for Pym but, as we discussed earlier, the success of Fantastic Four #1 had changed Marvel’s entire direction. After 13 years, superheroes were popular again and Marvel rushed to cash in. 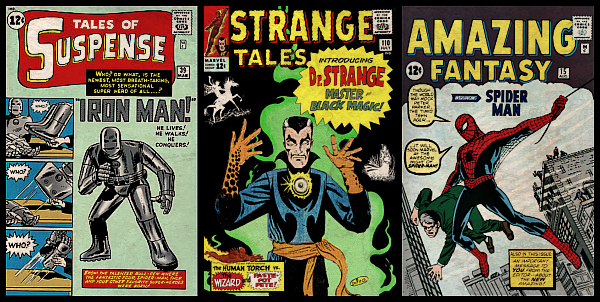 The “Monster of the Month” books were changed to accommodate the new trend with the long-running anthology series Strange Tales now featuring the Fantastic Four’s Human Torch and new occult character Doctor Strange. Iron Man took over Tales of Suspense, soon to be joined by the freshly-thawed Captain America. Marvel’s biggest success story, however, sprang from a comic slated for cancellation. Alongside the usual low-key sci-fi and monster tales of Amazing Fantasy #15 was a story about a gawky teenager who gains amazing powers from the bite of a radioactive spider. I don’t remember what it was called, but the kids went crazy for it. Galvanized by this unexpected success, writer/editor Stan Lee went back and combed the anthology books for other potentially lucrative super hero concepts. 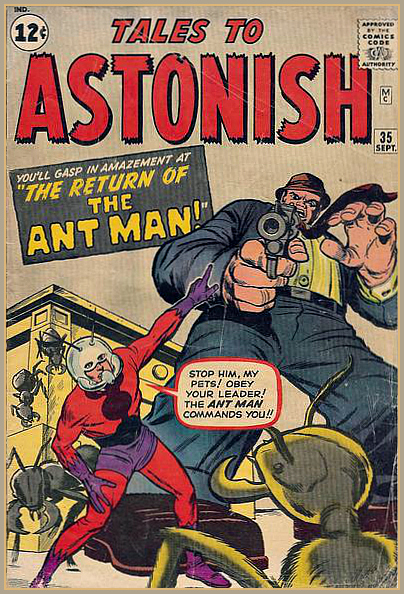 Lee decided Henry Pym was hero material. The scientist received a new cybernetic helmet, a spiffy red-and-blue union suit and the keys to Tales To Astonish. As Ant Man, Pym went on to battle such adversaries as Egghead, the Scarlet Beetle, and the Living Eraser.

If a hero is defined by his foes, then it’s clear Ant Man never had a chance. It’s hard to say why he was always saddled with such lame villains. Perhaps all of the good stuff was being funneled into more popular books? Maybe his writers were at a loss as to how to handle the moody, unpredictable scientist? Maybe no one thought the book was worth the effort? Whatever the case, his stories suffered for it, and before Ant Man knew it, he’d been given a partner (the winsome Wasp) and had lost half his pages to the Hulk. It was a difficult transition for our hero, but change was in the wind. 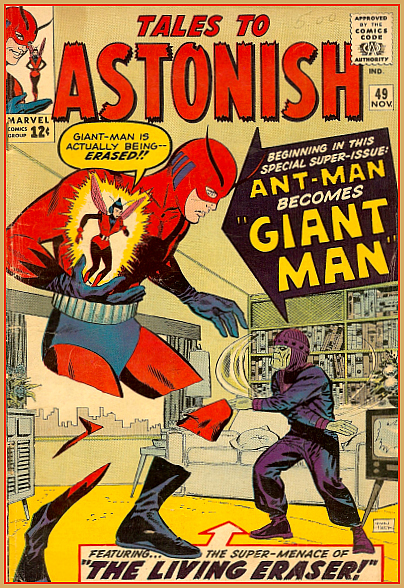 The inaugural issue of The Avengers saw Hank Pym join the group as Ant Man; by the second issue he had a new codename (Giant Man), a new uniform, and new powers. Aside from brief cameos as Ant Man in issues 93 and 100 of The Avengers, Pym would not wear the costume again until his nervous breakdown at the hands of Ultron in issue 161. After that, he permanently retired the identity. (back to original here) In Marvel Feature #47, criminal Scott Lang stole the Ant Man gear from Avengers mansion to save his daughter Cassie from gangsters. After her successful rescue, Lang was given the costume and identity with Pym’s blessing. Lang later died and a third Ant Man eventually appeared, but the less said about him the better. Hopefully, the long-awaited Ant Man movie from Edgar Wright will provide the shot in the arm the character needs to finally meet his full potential. 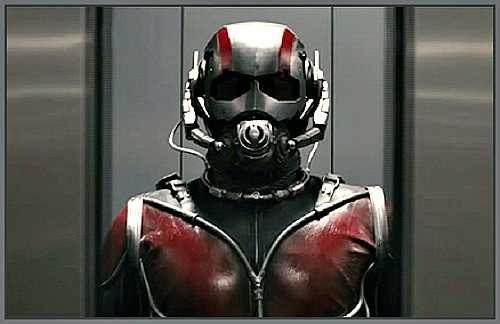 Ant Man was never merchandised in the time Pym wore the costume. It wasn’t until 1999’s Toy Biz Classic Avengers box set that he saw representation in plastic form. At 2″ tall, the figure is obviously bigger than an ant, but the seven points of articulation and removable helmet soften that blow. It’s a great little representation of Pym; Toy Biz thought so too, reissuing him and partner Wasp again with the Marvel Legends wave 4 Goliath chase figure. 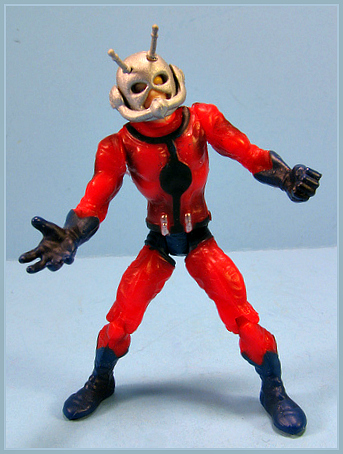 Ant Man’s next plastic incarnation came in 1999’s Avengers: United They Stand line. Based on the cartoon of the same name, the show featured Pym leading the second generation of Avengers. It bore little resemblance to the comics, with a noticeable absence of the big three (Captain America, Iron Man, and Thor), and our heroes “powering up” in hi-tech battle armor. This resulted in a significant change to Ant Man’s uniform, with the character taking on a more insect-like appearance. It… wasn’t great. 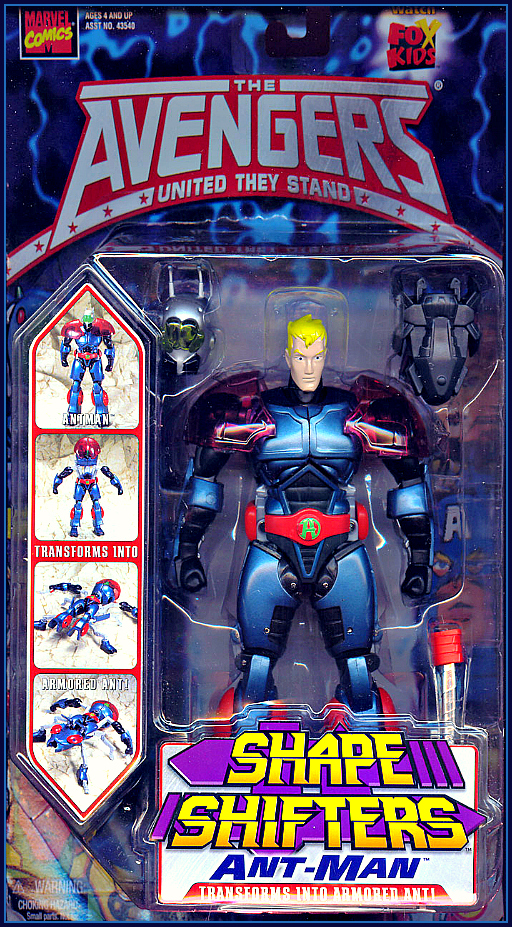 The Avengers: UTS cartoon was cancelled after only 13 episodes and Ant Man fans had a long wait for more merchandise. After the re-release of the box set figures in Marvel Legends wave 4, Ant Man showed up again in wave 7. This time his appearance was a bit more unconventional, with the character sculpted onto one of Hawkeye’s arrows in a recreation of this iconic Avengers cover. Technically, it’s the Scott Lang version of Ant Man, but still — how cool is that? I remember unboxing my Hawkeye figure and discovering this little gem waiting inside. His inclusion was a complete surprise and added some serious punch to the avenging archer’s arsenal. 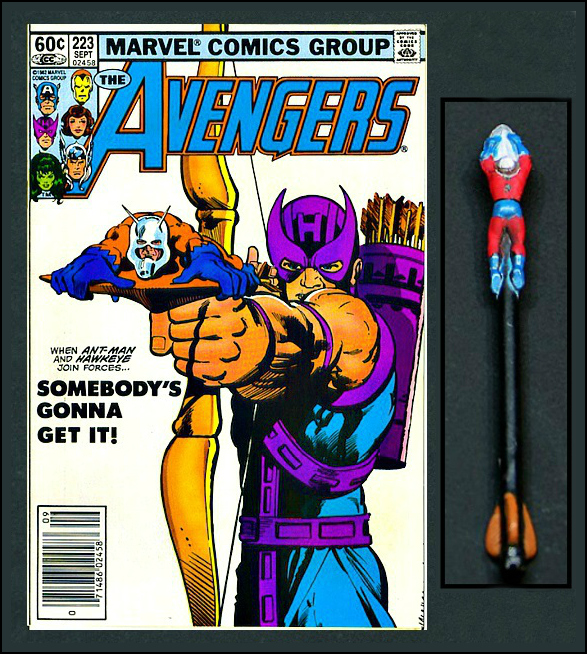 Fans of Ant Man were happy to take what they could get, but the desire to have a properly scaled six-inch figure remained. We didn’t have to wait long, as Ant Man arrived in Marvel Legends wave 10, aka the “Giant Man wave.” Being the first of the “Wal-Mart exclusives” meant getting this wave was exceptionally difficult for some collectors; I searched brick-and-mortar stores for months, finding only a lone Weapon X for my troubles. Fortunately everyone was so focused on buying these for the BAF pieces that the figures themselves were had fairly easily on the secondary market. Ant Man, anyway. 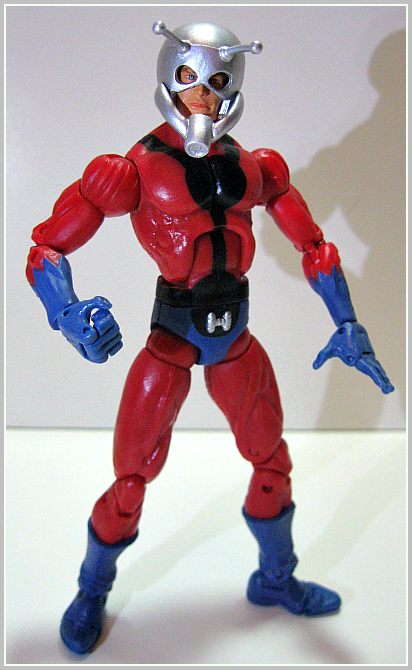 Yes, this is also technically the Scott Lang version of Ant Man — it says so right on the box, but if you leave his helmet on, no one will be the wiser. Pym and Lang were both just regular guys who stayed in shape, and the figure does a great job representing that — it’s not overly-muscled, his being built more like a gymnast than a brawler. The hand-sculpts are especially appreciated, with one a standard grip/fist and the other open. It allows for some nice “ant commanding” poses — you know, if you’re into that sort of thing. 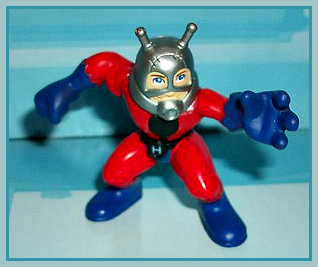 This little guy is from the popular Marvel Super Hero Squad cartoon. The line was aimed at kids, not collectors, but it seemed everybody wanted them. Ant Man made it into wave five but was very difficult to find in stores. These days he regularly sells for over $50! Who’da thunk it?

Here’s Pym in the recent Marvel Universe Classic Avengers set. As you can see, this Ant Man is tiny! Tinier than his ant, even! If there was ever a toy that lived in mortal danger of the vacuum cleaner, it’s this guy. It’s a very impressive effort for it’s scale, but why take my word for it when we can take a closer look? 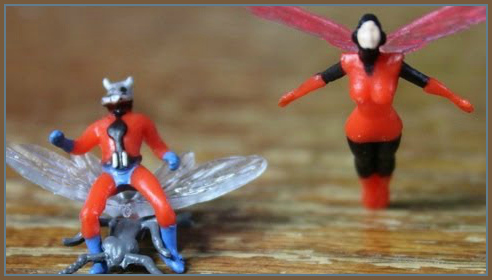 Man, when the Wasp says she needs time to put her face on in the morning, she is not kidding. Hold on, lemme see what I can do to help here… 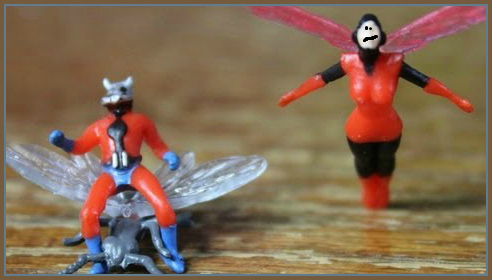 There. Now she’s a pretty lady.

Ant Man received a nifty Minimate figure as well. The additional parts allow you to display him as both classic and ’90s Giant Man. Oh, Hank, of all the indignities you’ve suffered over the years, the sleeveless jumpsuit-with-head-condom was definitely the worst. Well, it’s in the top two anyway… 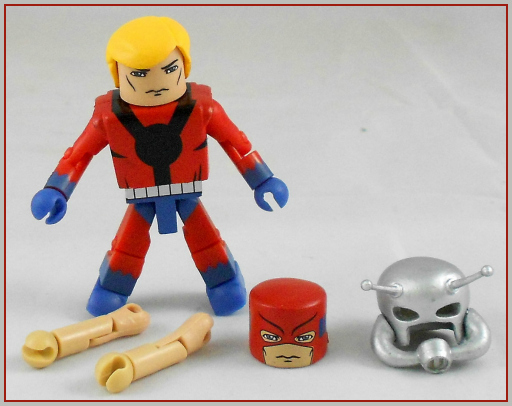 Like many Marvel characters, Ant Man got the Eaglemoss statue treatment, coming in #129 behind such luminaries as Ikarus, Shocker, and Impossible Man. He really is the Rodney Dangerfield of superheroes, isn’t he? Well, at least he came in ahead of Wiccan. 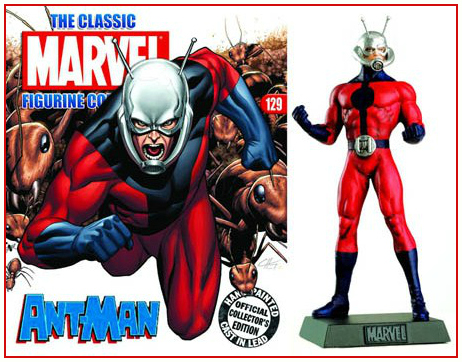 Last, and pretty much least, is this hunk of plastic crap from DisneyWorldLand. I know, they’ve been doing some nice things with Marvel Select, but stuff like this is just future landfill. Sounds critical? Hey, I’m one of Ant Man’s biggest fans (look at my username!) and even I’ll admit stuff like this is junk. If you want something Pym-related, grab the two-inch figures or the Marvel Legends version. Seriously, Disney has enough money. 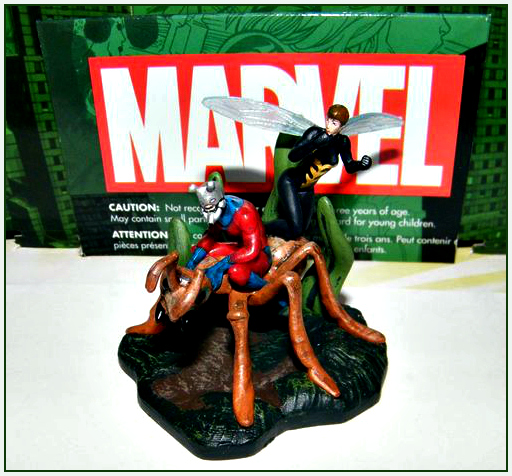 I mean, what is this even supposed to be? A paperweight? A fish-tank decoration? I’d just as soon buy $20 worth of actual ants, and I don’t even like ants… Oh, no, buddy, we’re just getting started! Check back in on Wednesday when we examine the Giant Man/Goliath phase of Hank’s life, and all the plastic-y goodness associated with it. It only gets weirder from here, Pilgrim!