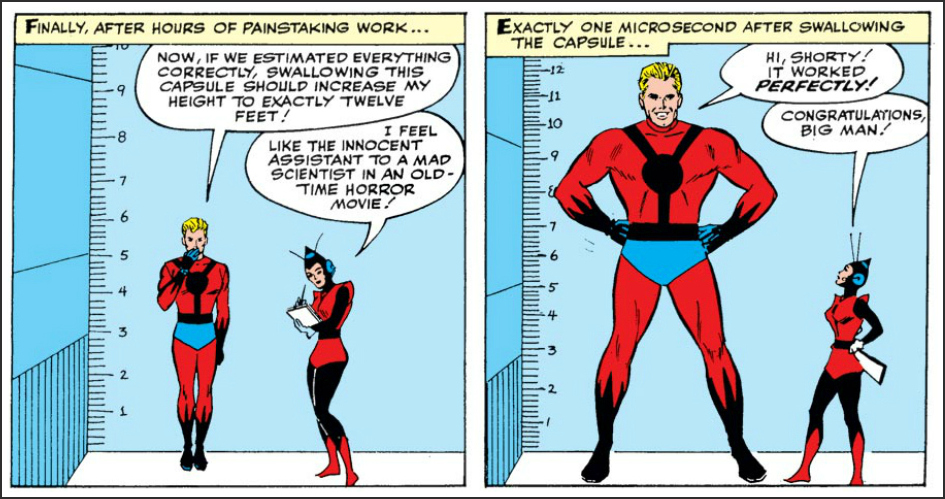 Henry Pym abandoned his Ant Man identity in Tales To Astonish #49 , but he hadn’t quit the hero game. He had a new trick up his oversized sleeve — instead of shrinking, Pym could now grow up to 12 feet in height. It was a complete 180 for the hero; instead of relying on his formidable mind, Pym would now use his oversized body as a weapon. It was the first misstep in what would be a career defined by them. At his core, Pym was a scientist. Being Ant Man worked for him because it allowed him to remove himself from physical conflict and think his way out of a crisis. Becoming Giant Man essentially meant he could now punch his problems away. It’s been said Pym “upgraded” to stay competitive with his fellow Avengers, but when you’re on a team with Iron Man, Thor, and the Hulk, the last thing needed is more raw power. Also: 12 feet? That’s really not all that tall, Hank. 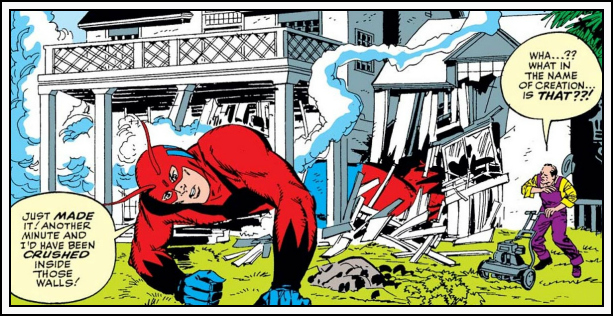 When he wasn’t busy terrifying the hired help, Pym tinkered with his growth formula. Eventually he reached a record height of 25 feet and celebrated by changing his name to Goliath. That’s three names in the space of four years, folks — beginning to sense a theme? While Pym relished his expanded powers, he immediately began suffering their side effects. The strain on his body was considerable, and he eventually found himself stuck at 10 feet tall. Too big to be normal, too small to be useful, Pym would wrestle with both his condition and his identity for many issues to come. Although he eventually regained his growth powers, the Goliath persona never quite fit him. No matter how big he grew, Pym never seemed to be able to fill a superhero’s shoes. 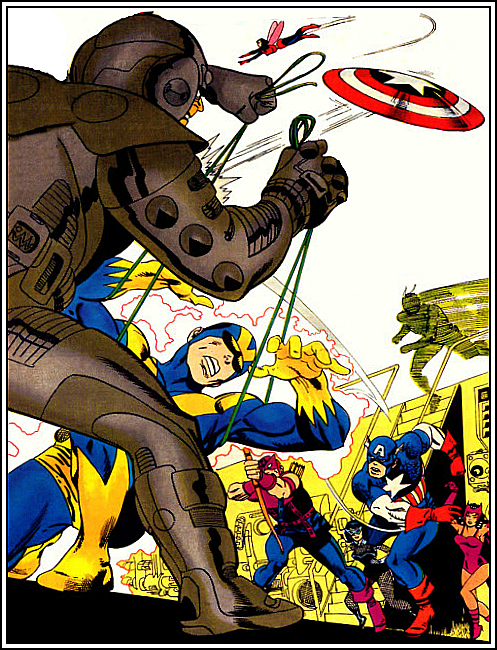 Hank and Jan left the Avengers in issue 16, but it wasn’t long before they were back. “Once an Avenger, always an Avenger,” was the rationale, but the fact that Pym’s spot in Tales To Astonish had recently been taken over by the Sub-Mariner probably had more to do with it. It was then Pym took on the additional responsibilities of being the Avengers’ chairman. Leadership was not a role Pym was born to, and he struggled to keep the team from tearing itself apart during conflicts with the Serpent Society, Super-Adaptoid, and Magneto. When Captain America or Thor dropped in for an adventure, Pym was always only too happy to have them lead the team. His often-expressed sentiment, “I’m a scientist, not a super hero,” indicated just how trapped he was feeling in his new role. 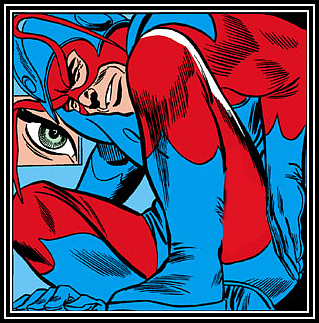 As rough as things had been for ol’ Hank, it was about to get a lot worse. In Avengers #55, readers were introduced to the robotic menace of Ultron. A product of Pym’s experiments with artificial intelligence, the once-primitive computer program had gone through a complex and rapid evolution, gaining sentience and a serious hatred for Pym in the process. After brutally wiping the memory of its creation from Pym’s mind, the malevolent robotic entity was free to act in secret. Ultron hypnotized the Avengers’ butler Jarvis into betraying the team, then attacked with his own agent — the mysterious Vision. Unexpectedly, the Vision turned on his master; with his aid, the Avengers were able to stop Ultron, but the robotic menace would return again and again to haunt the team. 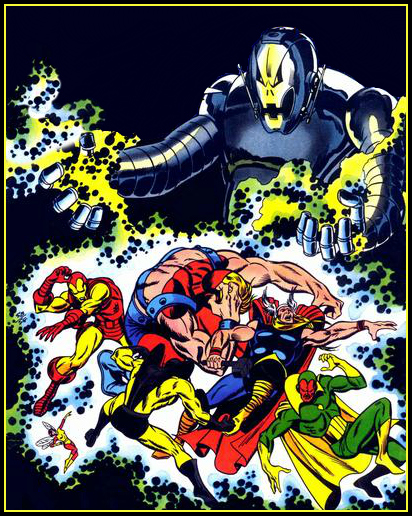 Pym was shattered by the latest turn of events and locked himself away in his lab. It was the last anyone would ever see of Goliath — but that’s a story best told in part three! 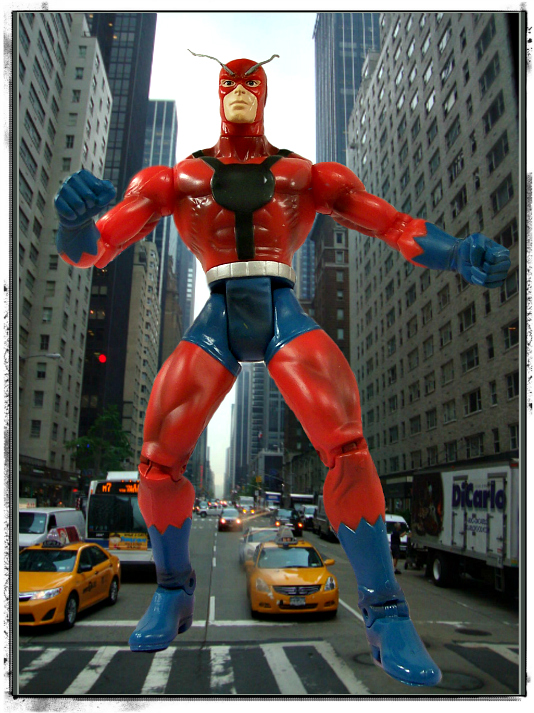 As far as toys go, first up is the Giant Man figure from the Toy Biz Classic Avengers box set. As a life-long Pym fan, it was amazing to finally get this figure. At the time Toy Biz were producing their Marvel figures in a 5″ scale, so this looked very nice alongside previous offerings. With it’s soft sculpt and limited articulation, it clearly predates Marvel Legends, but that didn’t stop Toy Biz from re-releasing it as the chase figure in ML series 4. They were nice enough to go the extra mile and repaint the figure in his Goliath costume. Granted, that costume didn’t have antennae, but it did have goggles and a totally different belt, but hey, it’s the thought that counts. 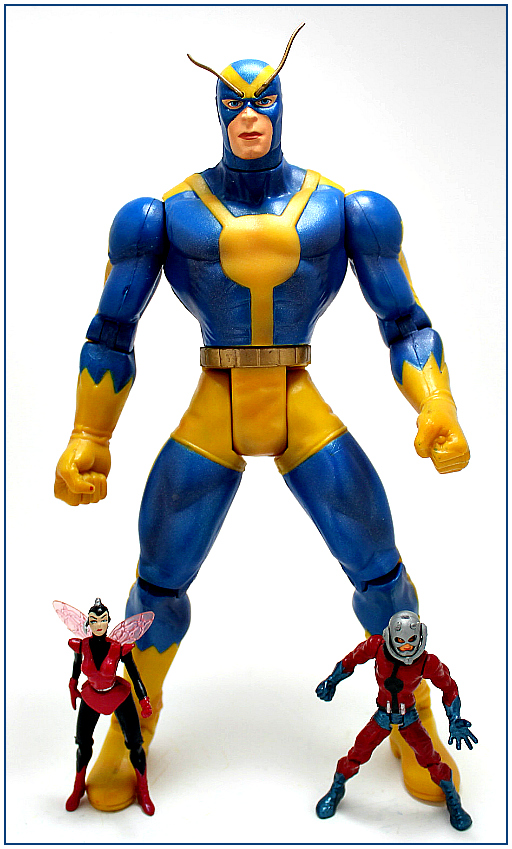 As we discussed in part one of this article, Toy Biz released Giant Man as the Build-a-Figure for the Wal-Mart exclusive wave 10. Easily one of the top 10 Marvel Legends releases of all time, it’s downright criminal that this figure did not receive wider release. It was a remarkable achievement for the time, and, at 13 and a half inches, remains the second largest Build-a-figure ever (the largest being Marvel Legends Wave 10  Sentinel.) Still, second is nothing to sneeze at — this figure towers over any Avengers display. 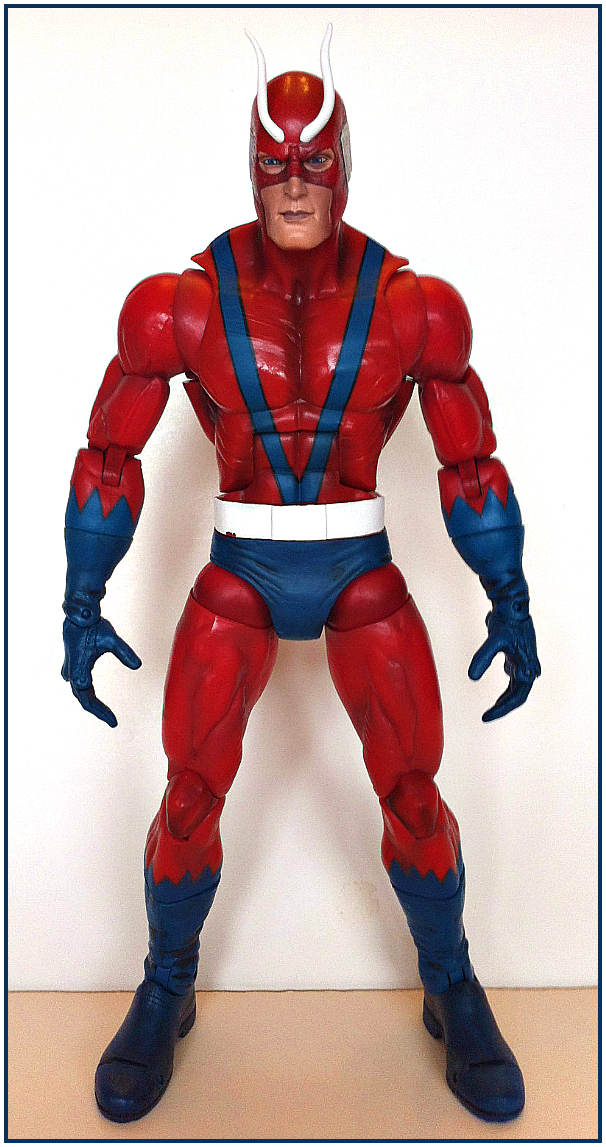 The head-sculpt on this figure is wonderfully lifelike. Pictures simply don’t do it justice: it’s the sort of thing best experienced in person. The paintwork is lovely, with some realistic rosy shading on the flesh and lips, but it’s the eyes that really pop. Between the furrowed brow and the steely blue pupils, Pym really does seem to be intently looing at something. It works both in close-up with other figures, or with Pym alone staring off into an uncertain future. 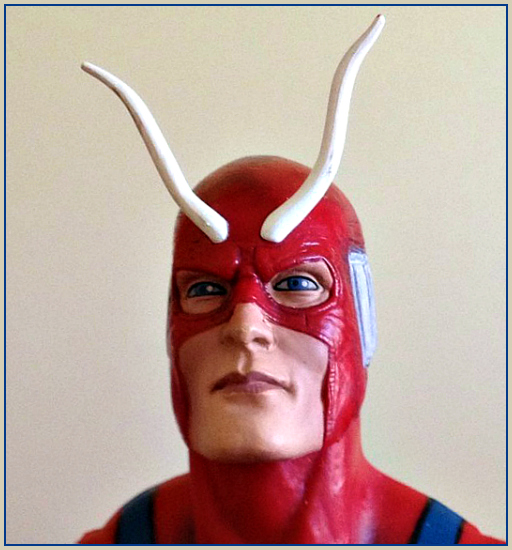 I have my wonderful wife to thank for my Giant Man. She came through in a big way that first Christmas, getting me the entire figure when all I’d been able to find was a foot.  It was the most amazing Christmas gift I’d even been given — until my daughter was born Dec. 20th of last year. That’s two I owe you, baby. 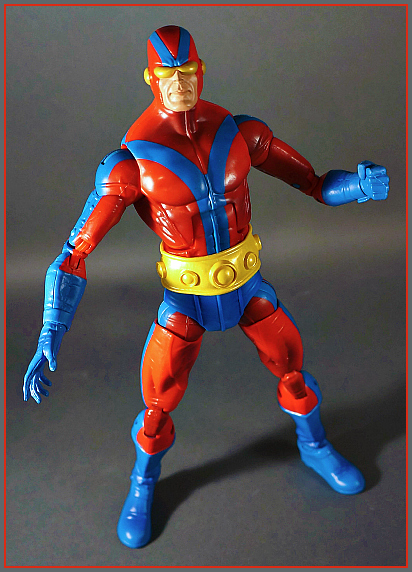 2008 brought us the Marvel Universe Gigantic Battles 2-packs. For those of you not familiar with them, the sets featured a Marvel Universe figure packaged alongside a newly-produced “giant” figure. Series 1 featured Pym in his red and blue Goliath costume. The figure had a variant, with the figure painted to represent the blue and yellow version of the suit. I somehow missed both of these at retail; I kept expecting to find them and one day they were going for $75. Yeowch! 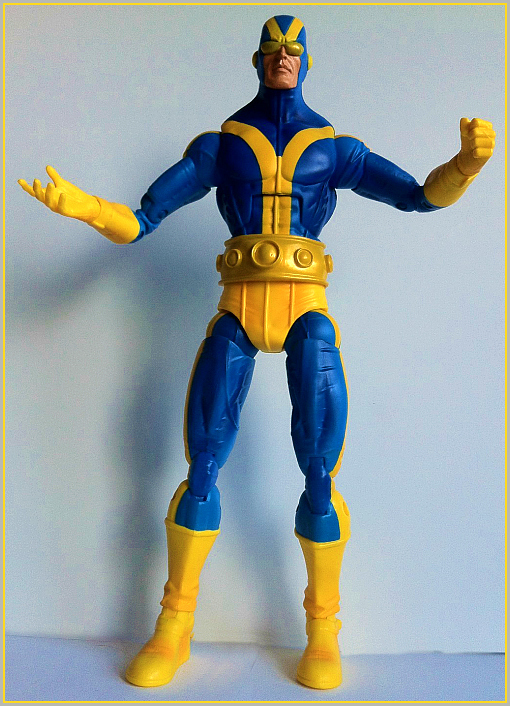 This figure is built upon a Marvel Legends Icons figure — Cyclops, to be specific. Because of the limitations of this base body, Pym ended up being a bit of a hodge-podge. He ended up with bizarre raised lines on his trunks, while his gloves and boots lose the distinctive saw-tooth pattern for more conventional flat cuffs. Those flaws aside, both versions are sharp and look great in any Legends or Marvel Universe display. I look forward to eventually finding them one day!

Giant Man made it into the Eaglemoss mini-statue line as well. It’s a decent representation of the character, but I can’t help but feel the pose could have been more dynamic. I mean, he’s just standing there with his arms out at weird angles; it’s pretty uninspired as far as these things go. Also, the figure is scaled to be much bigger in the other statues in the line, so what the heck is Pym supposed to be looking at? 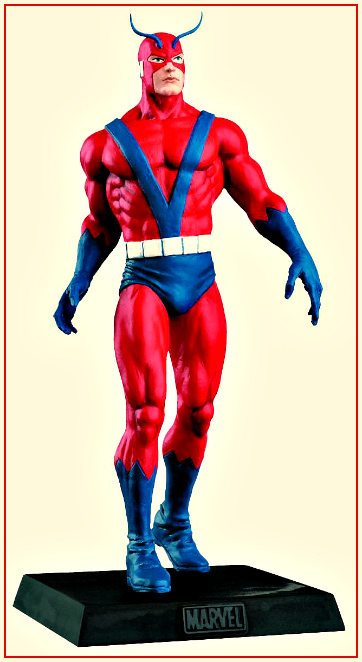 This Heroclix figure leaves that Eaglemoss statue in the dust. It has detail, dynamism, and personality — traits all lacking in the Eaglemoss product. Oh, sure, the former has a quiet dignity, but Giant Man is a superhero, not a gracefully aging member of the Greatest Generation. Anyway, the Herroclix the figure appears to be in mid-growth, all mass and momentum. This is clearly a newer version of the costume; I’m not familiar with it, but I like it. It hearkens back to the original Ant Man costume, with just enough differences to make it contemporary. The blacks of the costume are done in a glossy paint, which really pops against the matte red. It’s a nifty look and one I would not be opposed to on future Giant Man figures. (Hint. Hint.) 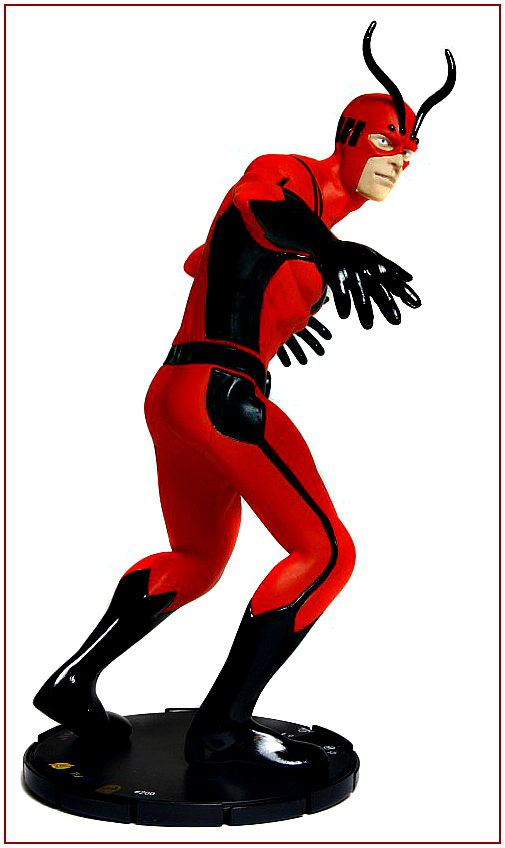 Hank has yet to get a figure in the Marvel Select line, but he did sneak in as Ultimate Thor’s base. I was never a big fan of the Ultimates line — I’m more of a classics guy, obviously. To me, the books smacked of changes for change’s sake, and the Ultimates version of Hank was just reprehensible. He had none of the classic characters wisdom, compassion, or depth, existing only to run through the expected paces. The character was a stain on Pym’s legacy, but to an entire generation, that was Giant Man. Not a high point, to be sure. 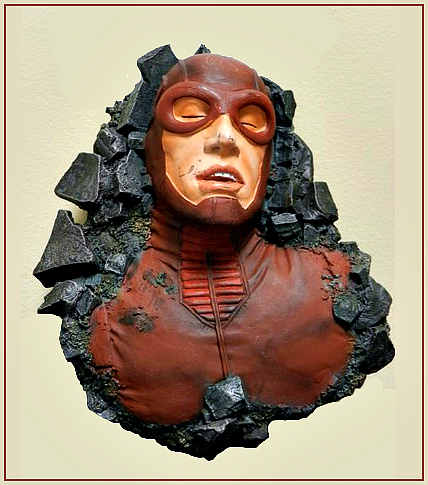 Hank Pym has been through a lot, but there’s still more yet. Tune in Friday for the final chapter, where we witness a fall from grace, a redemption and the uncertain road ahead. See you then, True Believer! 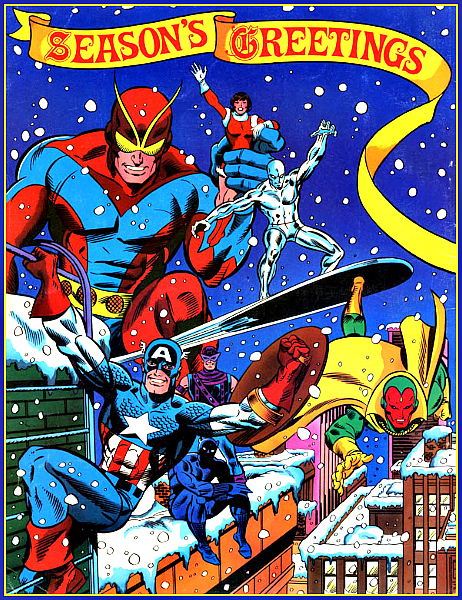