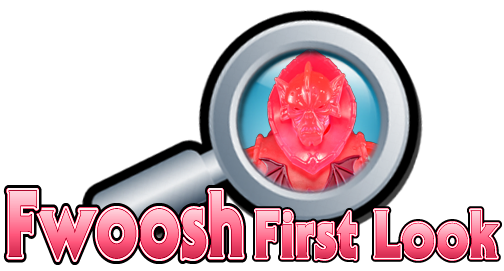 I have tasted the candy Hordak. Unfortunately, he does not recall cherry, strawberry, or even cinnamon. 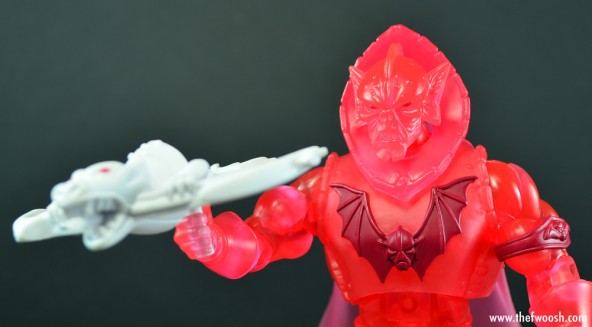 Ah, but the unexpected tyrant that crashed Matty Collector last Wednesday has arrived in fine form, thanks to some VERY lucky timing on my part. If you are not up to speed on the Spirit of Hordak, you can get some of the details here, but, really, shame on you for not knowing your Fwoosh. In a nutshell, though, this figure was completely unannounced, not previously revealed, and not long for ordering. I am not sure exactly how long he was actually for sale, but a quick check of the internets shows that it wasn’t long enough for most fans to get him. Don’t worry, though, Toy Guru has promised that he will be available in surprise fashion again, and then eventually via Early Access to subscribers. 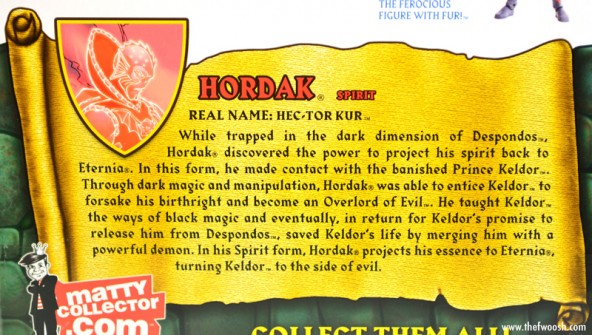 I am not going to get into the philosophical conversation about a release type such as this as it is currently playing out in fine form on the forums, but I must admit that I kind of thought the idea behind it was fun since I think I would have to go all the way back to the early 1990s when I was last able to get a toy with no prior knowledge of its existence. The internet has brought us many amazing things (you know, funny cats and rampant nudity?), but it is slowly draining the life completely out of the element of surprise. So I tip my hat to Matty for being able to pull off this fun exercise, but the verdict is still out on the success of the execution. If everyone that wants to acquire this figure can get their fair chance, then I would welcome more things like this on Matty Collector. I will leave any further discussion on this to the boards. 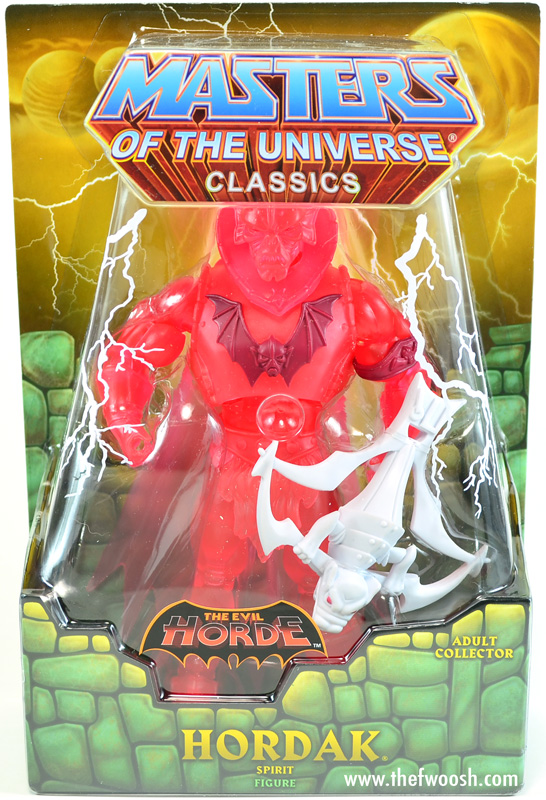 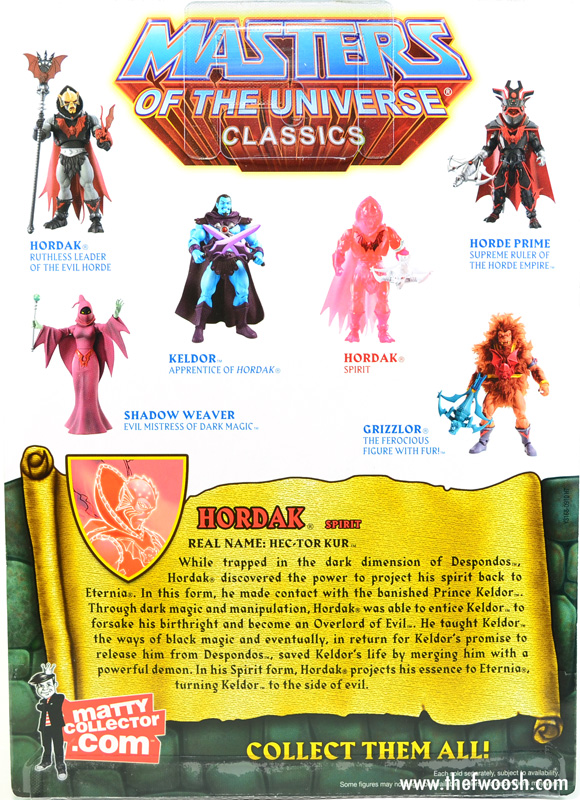 For the figure itself, well, you are getting a clear red version of the standard Classics Hordak figure with a repainted, and vintage-inspired, crossbow. The look is based on his “spirit” appearance from the “Origin of Skeletor” mini-comic that was included with the Club Eternia-exclusive King He-Man figure. Hordak apparently takes this form while communicating across the void from Despondos (Etheria) to Keldor back in Eternia. In that sense, he is more like what we would call “holographic” in the Star Wars mythos, but you get the idea. I cannot imagine that, prior to this appearance of this figure, ANYONE was demanding this version of Hordak for their collection, but for what he is, he actually turned out nice.

He is cast in clear red plastic that looks delicious (but is not, so please refrain from licking the plastic despot) with a few places painted to add accent to the figure. You can see that there is a slight variance in the reds from the PVC to the ABS plastic, with the former being slightly more pink. This is to be expected and I think it actually adds to the overall look of the figure. The painted areas include his red Horde chest sigil, armband, and red eyes. I think the eyes look groovy. I though at first that I could take or leave the red paint, but the more I look at him, the more I like it. I will admit that it makes for a more interesting scheme since not EVERYTHING is clear plastic, but it was really only done for that purpose as it doesn’t appear to necessarily be source accurate. I will note that, on the card back, his armband is painted white, as opposed to the final red; I think they made the correct choice in the end. 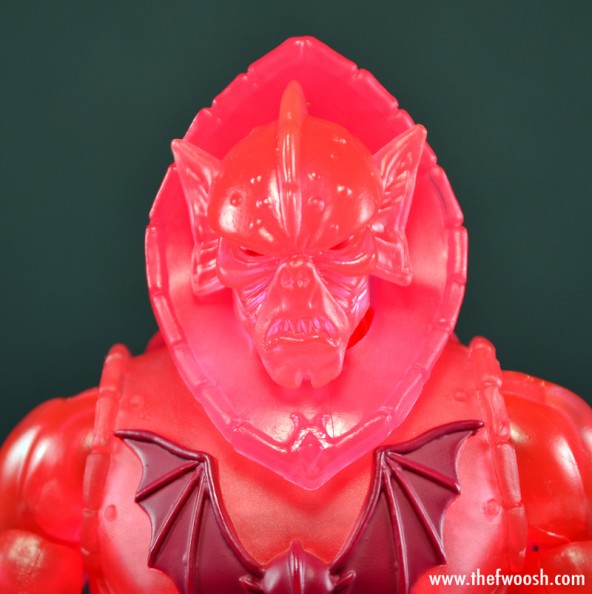 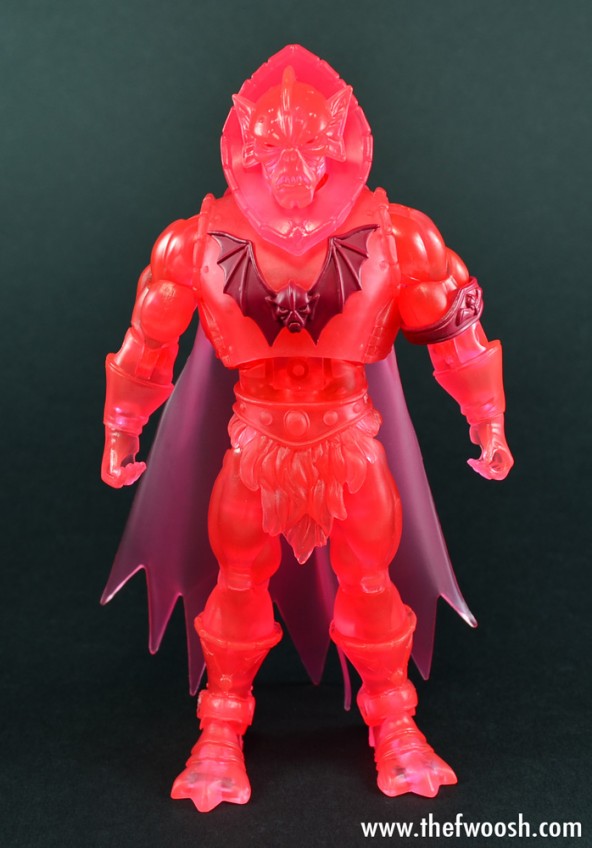 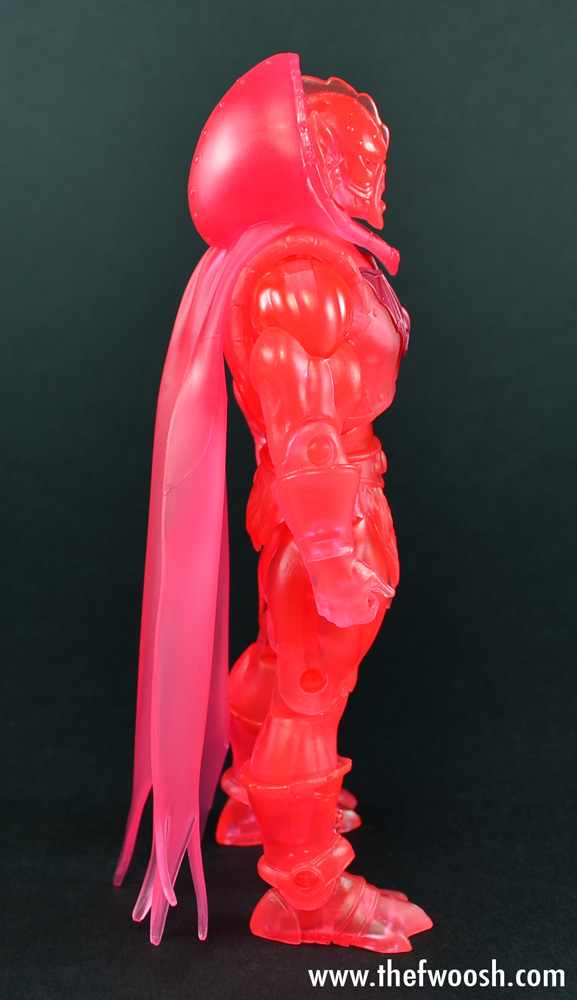 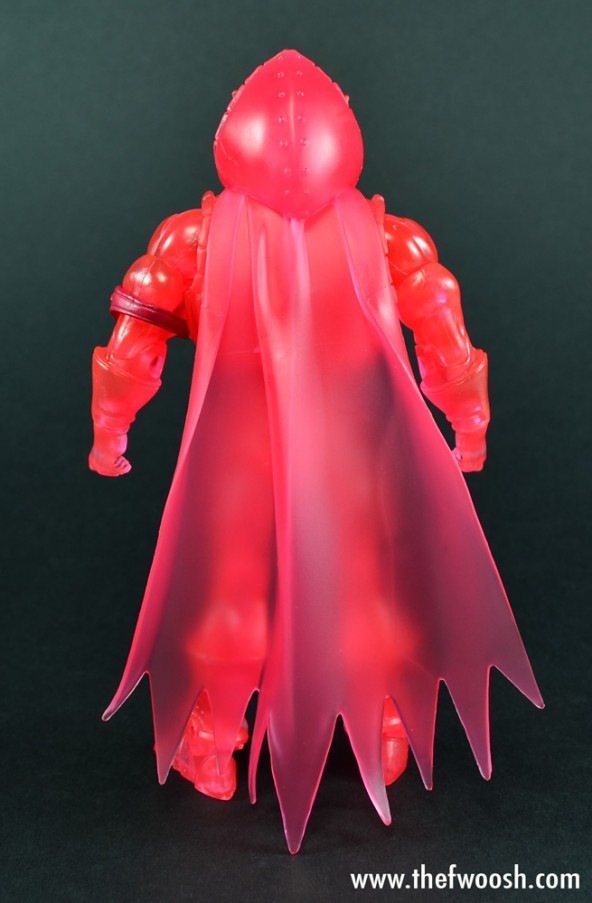 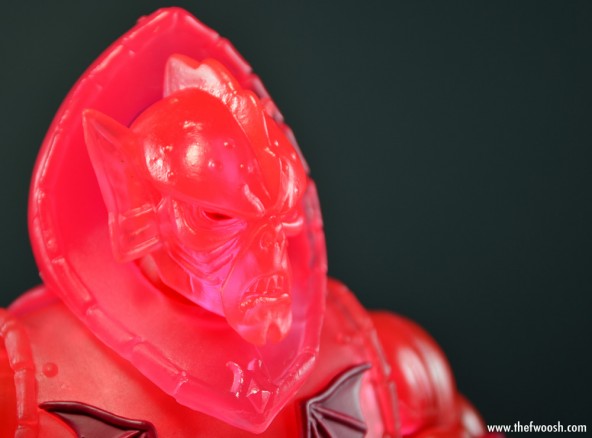 The plastic does feel softer than the previous Hordak figures, but nothing outside of the realm of what we have already gotten at some point in this line. That is to say, it is flexible enough that it is not brittle, but I would certainly stop short of describing it as being even remotely “gummy” or “rubbery.” I believe that Mattel has found the balance for the clear figures with this release, and I don’t think the issue that plagued the Goddess figure will be of any concern with Hordak. 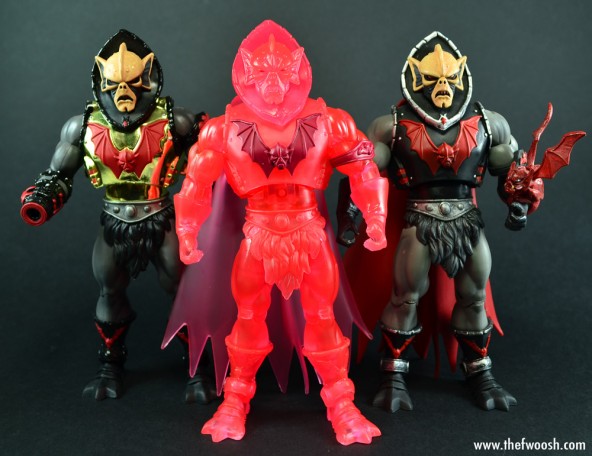 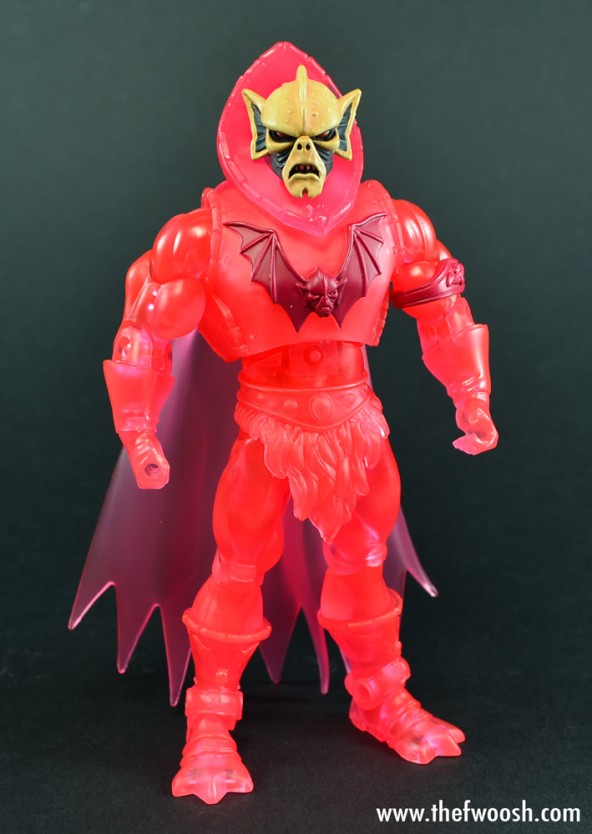 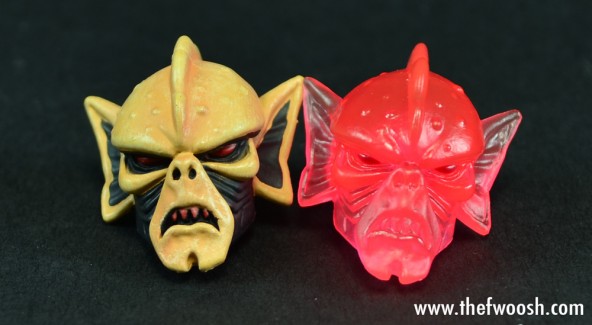 As you know, he also includes the long-teased white Horde crossbow that matches the vintage coloration much more accurately than the two previous attempts. I hate to admit to myself that this was reason enough alone for me to buy him (that, and I am a completist with this line), but yeah, the previous black and silver crossbows just weren’t doing it for me. 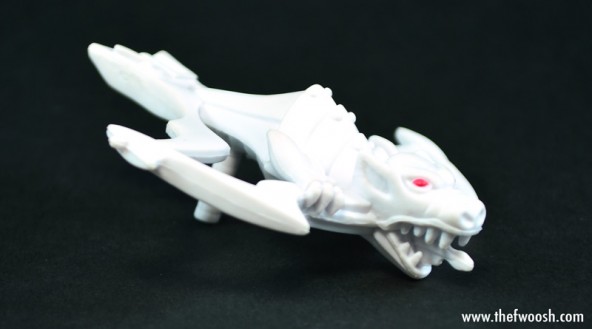 So this was quite the unexpected experience for all of us. Right now, those of us that actually fell into pure dumb luck and snagged him make up a much smaller group, but I really have confidence that everyone that wants to get this figure will have the chance to do so at some point this year. I have to admit that the dumbfounded feeling of surprise to get a figure that I had no previous knowledge of was kind of a thrill, so if Matty holds to his word and makes him available, I think I can be cool with this kind of release. It takes me back and I would be happy to be able to get, say, a Slime Pit He-Man out of the deal. Keep your eyes on Matty Collector and refresh, refresh, refresh – he will be back again.

*Thanks for reading, I only hope you did not miss your chance and snagging a SoH figure while you read this… 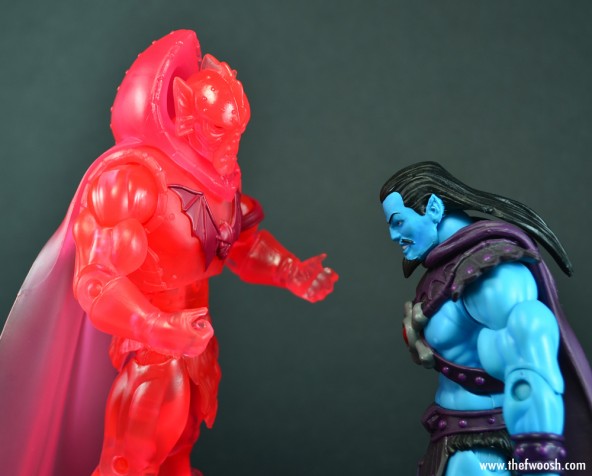 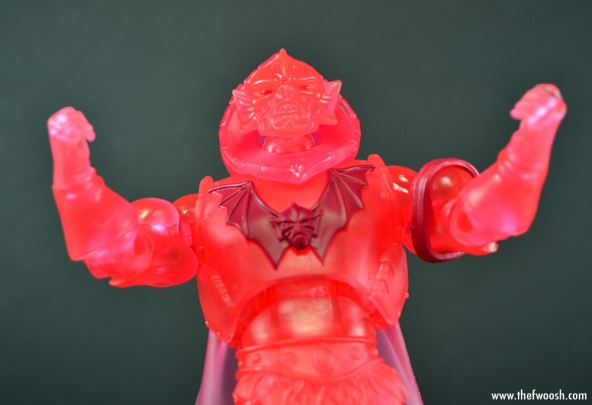