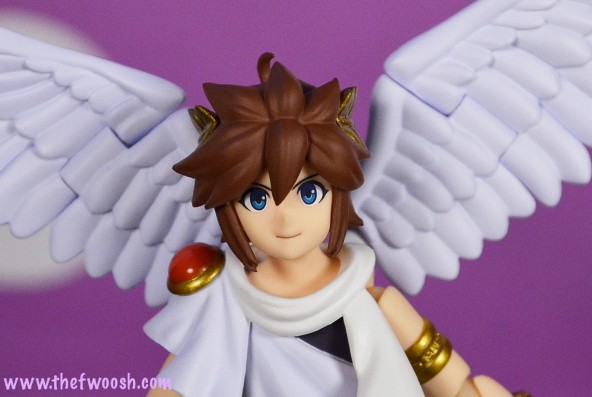 Kid Icarus is probably the biggest sleeper hit of the glory days of the original Nintendo Entertainment System. Nintendo had a real knack for creating original games like The Legend of Zelda and Metroid, just to name two, that had great character designs, a cool story, and really fun game play that would all go on to spawn many sequels and become part of the pop-cultural landscape of the ’80s. Kid Icarus, however, did not enjoy this same level of success, and I always thought that was a shame. Very few kids I knew back then were fans of the game, but I loved it and still do. And finally, after more than two decades, there is a proper sequel to the original game available on the Nintendo 3DS, so it looks like Pit may finally get the attention he deserves.

When Figma first unveiled pics of their Samus from Metroid, and then Link, my biggest want from this new Figma NES line was Pit, and I was over the frikkin’ MOON when I first saw the teaser pics. Now, this is not the version of Pit that I grew up with from the original Kid Icarus game — that was a much more cherubic character in nature and, I’ll be honest, probably wouldn’t have made for the best action figure. This design is from the newer 3DS game, which I haven’t played yet, so it is taking some getting used to for me to associate this much more athletic-looking character with the Pit I know, but I’m not having too difficult a time because this is simply an awesome figure. The box is the standard, colorful, eye-catching Figma fare. As is the case with all Figma boxes, it’s too darn nice to chuck in the trash, so now I’m stuck finding a place to put it. He is a dead-ringer for the Kid Icarus Uprising character. The sculpt is fantastic, and I can’t believe I’m saying this, but I think Pit is a stronger offering than the previously released Link and Samus, but that could just be my wild, blind bias for the character speaking. There’s a lot to like here and so much that was done right that I’m actually shocked I have a Pit figure that’s as good as this one. For a B-list, or maybe even C-list, Nintendo character, this figure is practically a revelation. I am super impressed. All his paint apps are sharp, crisp, and vibrant. This really is a nearly perfect execution. Pit comes loaded with accessories, including five swappable hands, two swords, an arrow with power rings, a handle to turn the swords into a bow, and two more power rings for his right bracelet. In addition to all this loot, he also comes with a swappable face and a floating eye — one of the key bad guys from the Kid Icarus universe. They may be expensive, but I feel you definitely get your money’s worth with a Figma figure. His alternate, swappable face is a bit angry. Pit also comes with the signature Figma flight stand, which is perfect for putting him in awesome flight poses. And the duel swords certainly look cool, but… … the bow is where the real action is. There’s no drawstring, so a little imagination is required if one is to truly believe this to be a “bow” because it could just as well be a fancy double-ended sword, but since his signature weapon in the game I’m most familiar with is a bow, I’m more than willing to buy into this idea. And once the arrow is in place, the effect becomes even easier to buy into. My only real gripe with the bow is it can be tricky to get him into effective poses that look like he’s actually using the bow. There are only one or two sweet spots where it really works and it takes some fiddling to get him in those poses. Other than that, this setup is awesome. The floating, tentacled eye is a great representation of the character from the game, and this is probably Pit’s coolest accessory. The position of the actual eye can be adjusted by turning the center-most tentacle just below his eye. That’s really all it does, but it’s enough to make it a really fun accessory and my only gripe here is that I can’t army-build them. I’d love to have at least three more of them. But as it is, he makes for a good target for Pit’s bow. Pit is a fantastic addition to Figma’s growing roster of Nintendo characters and I can’t wait to see who is next. I have a feeling anyone from the Mario games may be too much to hope for, but I’ll be honest — if there are no more Nintendo figures announced after Pit, I think I would consider myself content with just these three. Link, Samus, and Pit were definitely the “big three” NES characters for me as a kid, and it makes me insanely happy to see them all displayed together on my shelves, so anything beyond three will just be gravy. With Link and Samus. And here he is with some other old favorites: MegaMan, Simon Belmont, and Sonic. … and with Pac-Man. Just because.

If you’re even the most casual fan of Kid Icarus, then this Pit is an absolute must. It’s a better figure than we could have ever hoped to get based on the character, and it holds its own in comparison to almost any other figure on the market today. Aside from a couple very minor nits, this is an excellent figure and a very worthy addition to the growing Figma Nintendo roster.