Everybody has some of those pivotal moments in their personal history where a fateful choice is made, right?  The kind that you Monday-morning quarterback pretty much whenever you have a little too much spare time?  A personal favorite of my own:  I remember playing wingman for a buddy who got invited to a high school dance in another town.  Oh, man, talk about target-rich engagements. My friend was there with a date. Me? Free-freakin’ agent.  I had my pick of the room, and I don’t think I missed a song. As it got later, the competition got down to a couple of young ladies.  Time was running out, and I made a fateful choice, and put the moves on the more… aggressive… girl. Then, just like that, the dance ends the lights come up, and…..

oh, crap.  I picked the wrong one.

A year or two older, and my arrogant teenage self would’ve corrected this without giving a damn about other people’s feelings. But no, this was a younger, more wholesome, me who felt obligated to not lead a girl on.  No good deed goes unpunished, I learned that night, while I watched the shyer, and much-cuter girl leave unaccompanied while aggressive girl scraped my tonsils. No, seriously, it was that bad.

Oh, you’re still reading, eh?  Then I should get to what the hell any of this has to do with Springer.  Another fateful moment in my history occurred much earlier, around 1987, in the toy section of a Best Department Store.  There I was, looking upon what had to be some of the last of the ’86 movie Transformers: Cyclonus, Wreck-Gar, and, you guessed it, Springer. The pressure was on, I was able to get just one of these guys and I had to hurry. We had places to be. Springer got picked up first, then after panicking, I grabbed Cyclonus instead. Mom’s getting mad, it’s time to go, make a decision…

And I left the store with freakin’ Wreck-Gar. Apparently, making decisions under pressure is something I’m not very good at, from an early age.

So I never did get a G1 Springer, which is stupid, considering he was one of the characters I most revered from the movie.  Really, who didn’t? He was a ‘bot of action, a wiseass good guy that spouted clichés that anybody over the age of about 13 should cringe at, but under 13? That stuff was gold. He was a staple of the third season of Transformers and was even named the heir apparent of the Matrix, should Rodimus do something, you know, moronic.  On the print side, Springer took his step toward legend — wait for it — dary when Impactor tasked him as his replacement in a little team known as “The Wreckers.”  Then a couple decades later some very talented guys, who also grew up in the ’80s, came along.  And being a Wrecker became something so inspiring, it could turn European-only-released 3rd-stringers into fan-favorites that made you cry when they met the curve of the team’s 40% survival rate.

So when Classics began some 25 years later, I was more than ready for another crack at the ‘bot who apparently had better things to do tonight than be in my collection.  First, I paid through the nose for a Botcon version, based on a Cybetron Hotshot figure, which definitely had the moxie and the firepower, but was a little on the small side and without an airborne mode, cool as the armored car one was. Next, the longest serving Springer I own, the Target Universe 2-Pack version, again based on a Cybertron figure — Evac this time.  This one was considerably bigger, and brought the much-needed helicopter mode back, but it still left me wanting, well, a triple changer.

That all changed a bit with my second 3rd-party purchase: Fansproject’s Warbot Defender.  Here, at last, seemed to be a ‘bot with the right stuff — a fresh take on the original, three complete modes, and plenty of Springer personality.  And he was pretty damn good, I have to say. Unfortunately, the satisfaction started to wane a little over time. Maybe because Warbot was trying to scratch too many itches at once?  He had some very intricate and delicate transformations, a style that wasn’t quite classics or G1, diecast parts that didn’t really add much value, and packed a heavy price tag. 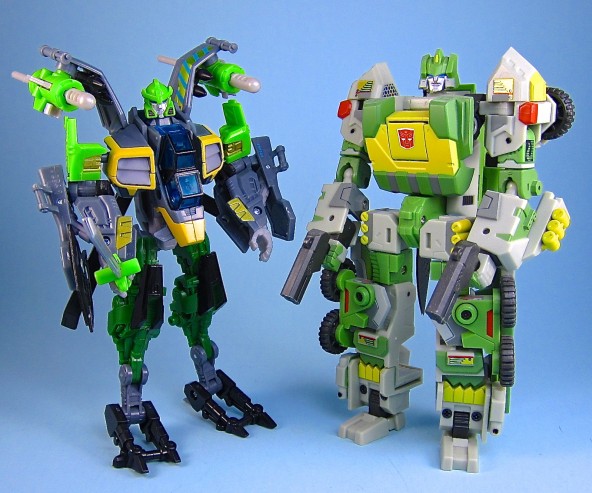 GDO Springer and Warbot Defender — at an online auction site near you! (Pic by canonball)

Eventually I parted ways with ol’ Warbot. If my collection had been a bit different, or maybe if he were a character that I didn’t have such high standards for, I might’ve been fine. But as the paragraphs above would serve as evidence of, that’s just not so.  I had resigned myself back to the voyager repaint version, and I started to doubt that a proper triple-changer version was ever in the cards.  Hasbro seemed to confirm my doubts by offering up a kinda cool but still too damn small and still two-moded GDO import version.

But right after that one was hitting the shelves late last year, the rumblings of another version of the Wreckers leader started. Perhaps fate was finally to intervene for Springer, and right my decades-old wrong…