Ugh. Okay, business first- I’m going to give this my damn level best attempt at reviewing this figure without resorting to dick jokes.  Not that I’ll be successful, but, dammit, for y’all, I will try.

So ToyWorld, a respectable little outfit that is quickly gaining acclaim, has thrown its hat into the third-party Headmaster race.  And it has done so with a somewhat rare Voyager/Ultra classed-size figure that, oddly enough, people probably weren’t clamoring for, and yet, just like Grind Rod, is quickly working up the ranks like a sleeper hit.

We’re looking, of course, at the unfortunately-named “Hardbone,” a fairly well-realized homage to G1 Headmaster Hardhead.  Initially, I had planned on passing on this figure. Like many, I had  long-ago purchased and upgraded the Hasbro Universe Hardhead, and I was pretty content with it.

Still, this is unexpectedly a character that did warrant another upgrade in my collection.

You see, while I absolutely earned my “child of the ’80s” badge, I was pretty damn little when Transformers officially began.  So it wasn’t until 1987 or so that my Transformers collection really hit its stride.  In these strange, primitive pre-eBay days, most of my “season 1” ‘Bots and ‘Cons came from yard sales, classifieds, and swap meets. So, to fatten the ranks, I got a lot of Headmasters and Targetmasters.  Among those, naturally, were guys like Hardhead and Brainstorm — which I think were the only two Autobot Headmasters I owned as a kid.

Hardhead was a guy who didn’t really get much of a built-in character, seeing as he only appeared in the last three episodes of the cartoon stateside. Even his tech-spec didn’t flesh him out much; he pretty much just sounds like a stubborn jerkass. So my imagination was left to create the mythology behind this guy, who seemed like a pretty important inclusion to the severely under-gunned Autobots.  Seriously, the only other tank was Warpath, and let’s face it, that guy’s a little idiot.  Under my grade-school guidance, Hardhead became a stoic, stereotypical soldier, answering commands with a stout “Yes SIR!” and supplying a lot of the major firepower on the field, with his buddy Brainstorm running close-air support. In a collection without an Ironhide, Hardhead often became Prime’s right-hand man, and served his CO honorably until his figure cracked in the middle and fell apart.

Fast forward back to todaystimes, and I’ve had several years of IDW comics and Japan’s Headmasters series, so now I know Hardhead is a stubborn jerkass who answers his own questions and occasionally gets drunk and sings karaoke.

Seriously.  Look it up.

And by 2009, I was absolutely interested in the Ultra-class figure he received thanks to a pretty smart repaint of Onslaught.  When that was followed by a Headrobots upgrade kit, which added more guns and a Headmaster, I pretty much marked him off my list. 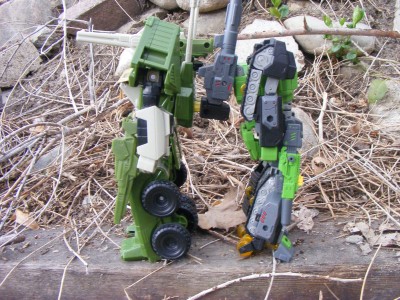 And yet, somehow, this dude ended up in my mailbox. Huh?

Well, his Cybertronian H-tank alt-mode is much closer to the original.  In fact, I think Hardhead was the original H-tank, a longtime Hasbro favorite.  I’ve since dubbed it a “Class 1 Ruination Tank” since James Roberts is awesome.  Now, granted, IDW made an effort to fit the Universe version in as Hardhead’s earth alt-mode, and it’s appreciated, but Hardhead doesn’t strike me as a guy concerned about blending in.  The color, which was a major turnoff in early pictures, is much more subtle and visually pleasing in person than I had expected.  All things equal, I would’ve preferred a nice olive drab, but it’s nice to get something other than red on my current collection’s shelf. The tank mode has plenty of artillery, allowing for multiple placements of his rifles as well as his shoulder cannon; it rolls nicely; and has a decent cockpit for Duros to fit in.  Just make sure you bend his knees in a sitting position before trying to make him drive.

In robot mode, the homage is still pretty strong.  A lot of this is due to mimicking more of the transformation, like having the arms and legs formed out of the treads like the original.  It didn’t take long to grow on me.  Articulation is pretty solid, and construction is good, with a few little critiques.  His arms could’ve used a positive lock rather than just friction to keep them in place.  This can be corrected by tightening the grooves these pieces slide on, but I don’t like extra work.  Everything else secures nicely in bot mode, though.

Sheer size puts him right on par with the Universe version, and that might’ve been the tipping point for me; now he doesn’t share a mold with Onslaught.  I still like the figure, though, and I’d love to re-upgrade him to another character. Roadbuster, maybe? 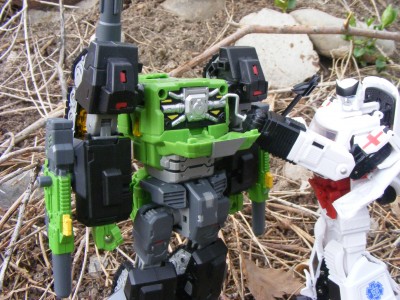 Little modification from the doc….

This guy kills it in features and details. He has two nicely detailed rifles, complete with (non-functioning) picatinny rails, and what might be little red dots on top. His shoulder cannon is similarly detailed and offers great options in posing.  It has a clear orange muzzle cap, but I don’t care for it, so I left it off. He also is backward-compatible with the original Headmasters and the Headrobots mini-figures, which is a great touch.

He also stashes a couple of last-resort weapons in clever shin compartments — a mean little Ka-Bar on one side that can also double as a bayonet, and a potato masher (Stielhandgranate) in the other.  A ‘bot after my own heart — you know, if I stuck grenades in my boot.

You might’ve noticed that shiny new Autobot symbol on his chest, and, consequently, on as many of my other Transformers as I could manage. Those would be Reprolabel’s “Cybertronian Glow” stickers offered as a bonus with a purchase of $30.  I need more, so hopefully they will offer these among their regular symbols soon.  Hell, I’d love to see some character-specific sets done using these too — I’d probably buy them all.

So how about that?  I managed to waste a good chunk of article on a figure I was initially going to pass up.  If there’s a take away from that, it’s hopefully that this is a figure certainly worth your consideration, even if you already own the official one. If you don’t, then I would recommend it without hesitation.