In the ’80s, there was no better idea than mini-comics packed in with your favorite heroes and villains. From Super Powers to Starriors to Sectaurs, more and more properties began including them with their action figures. But no property was more defined by their mini-comics than Masters of the Universe. For some people, the mini-comics represent their one true canonical interpretation, and their impact has resulted in mini-comic concepts and designs finally becoming a reality. From the Alfredo Alcala-inspired Alternate Skeletor head packed in with Demo Man, to the towering awesomeness of Procrustus, to the upcoming premier action figure of Mini-comic character Geldor, Masters of the Universe Classics is paying proper tribute and homage to these beloved little booklets.

With Geldor deservedly winning an upcoming slot by fan vote, it’s time more mini-inspired characters got their due. This will be the first of a pair of upcoming articles; this article deals with original mini-comic characters that have never seen plastic representation. Tune in later in the week for an article detailing mini-comic variations of popular, already-produced figures. 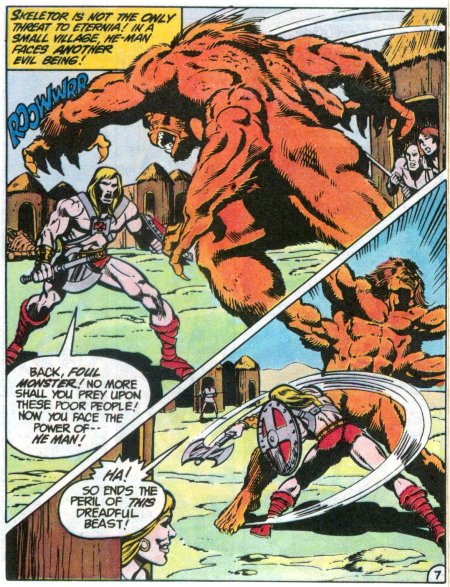 Debuting in He-Man meets Ram-Man and with only two panels to his (or its) name, one of which proving that this was no FilMation He-man, the Glorm may not be the most popular choice for a figure, but there’s no denying how awesome a figure this would make. Imagine this four-armed creature towering over your action figures, fangs bared. And because so little is known, it could be an army builder. Is Glorm its name or the name of its race? Maybe there’s an army of Glorm waiting to strike. The possibilities are endless. The Four Horsemen would make this figure look insanely cool. This wouldn’t just be a MotU character — it would be almost guaranteed to have the massive crossover appeal Draego-Man enjoyed. This is a figure that could not only menace your MotU figures, but several other toy lines as well. In this world of limited tooling expenses a fully sculpted figure like this might be an extreme longshot, but that doesn’t mean it should be totally counted out. This underdog is just enough of a contender to take the fifth slot. 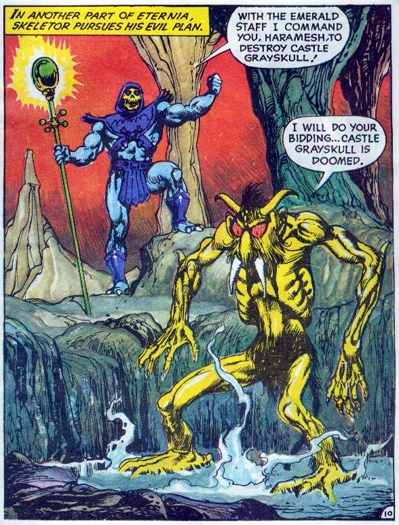 A shape-changing, twin-fanged creature that made the cover of Siege of Avion, Haramesh follows the Glorm as yet another creature who would have tremendous crossover appeal. With his burning red eyes and emaciated yellow body, Haramesh’s visual style is compelling, and the Horsemen would go nuts on translating him to reality. There can never be enough demons and monsters in a line like MotU, so both the Glorm and Haramesh would make great figures for He-Man to whack with his axe. And the name is aesthetically appealing also. Haramesh — it rolls right off the tongue with an ancient, other-worldly feel. 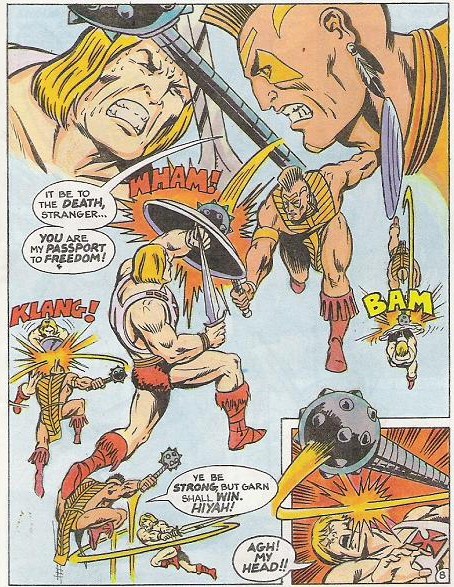 Let’s break up the monsters before we dive back into… more monsters. Debuting in Slave City (a comic we’ll be returning to), Garn has a bit of Native American flair to his getup. An enslaved arena warrior (like Vykron), Garn is another mohawked Eternian who fought an amnesiac He-man over the course of a page or so. Apparently he speaks in some type of pidgin pirate-lingo. Native American pirate. Only in MotU! 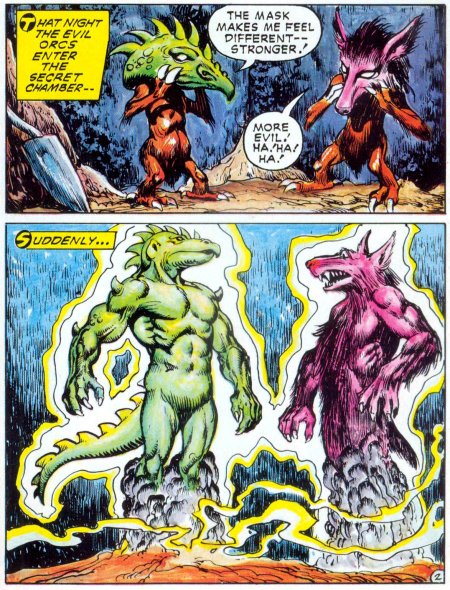 While this list is threatening to become nothing but monsters, it’s hard to deny that pretty much everybody wants the Mask of Power Demons. The good news is that there could be some parts reuse between these guys and Haramesh. Debuting in Masks of Power (of course), these unnamed demons would undoubtedly have to be a two pack, and, as a bonus pipe dream, they’d come with separate masks of power and a pair of minimally-articulated Orcs to represent them pre-transformation. I know, I know, I want too much, but if Haramesh and the Glorm are extreme long shots, then at least go to town on this pair and do them right.

And now, without question, the number one most-needed and easily-guessed Mini-comic character: With Geldor’s spot assured, Lodar is, without a doubt, next in line as single coolest mini-comic creation. The man runs a place called “Slave City.” That’s not a vacation resort. With a cool mask, badass spiked armor, crazy ninja-esque mystique, and the fact that he managed  to last a handful of pages in hand-to-hand combat with the most powerful man in the universe, this second and most important character springing from the pages of Slave City needs to be made before the line ends. I’d trade three Glorms and a Haramesh to get a Lodar. Not legal tender!

Well, that’s five picks. Have a different opinion? Of course you do. Leave a comment and make your own picks!