One thing I’ve enjoyed the most about Masters of the Universe Classics is that they’ve taken the time to give us variations on iconic looks, either as a regular slot or in the late, lamented two-packs. Being able to finally get such character variations as Green Goddess, blue Mer-Man, or Blonde Teela shows a unique dedication to the history of the property.

The unofficial sixth choice on this list would be the one dream figure I’ve always wanted: Mini-comic Ram Man. While I’d love to get a true, proper mini-comic Ram Man, I recognize that the one we got is the one we’re going to get. Not to diminish that it’s the best Ram Man figure we’ve ever gotten, but a dream’s a dream. 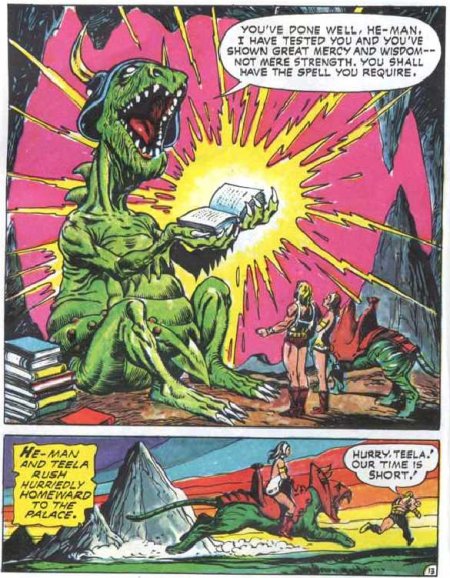 I love the fact that they took the time and dedication to give us a Granamyr. When the fans were allowed to vote on his color, I was fairly certain the FilMation red would be the winner, but my mini-loving heart yearned for a green one. Not that I dislike the red — it’s a striking, snazzy figure sitting there with his fingers tented pondering the unponderables — but it’s not like they don’t have him sculpted already. Maybe they could do one of those (ugh) thermometer things they love to do so much and gauge the interest in a green one. You really can’t have enough helmeted dragons anyway. That’s science. 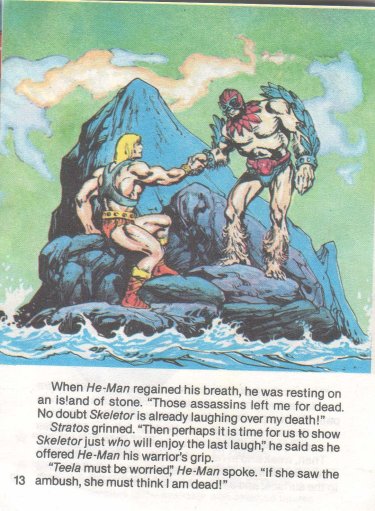 Everyone seems to complain about Stratos because he doesn’t have any weapons or is boring or whatever. I wave my hand at those complaints. While we got an alternate Stratos with swapped wing colors in a two pack, what I really wanted was a skin-tone Stratos as he was depicted in that first series of mini-comics. The precedent is already there with blue Mer-Man, a figure I was completely giddy to get, so it only seem right that Stratos receive his unique version. 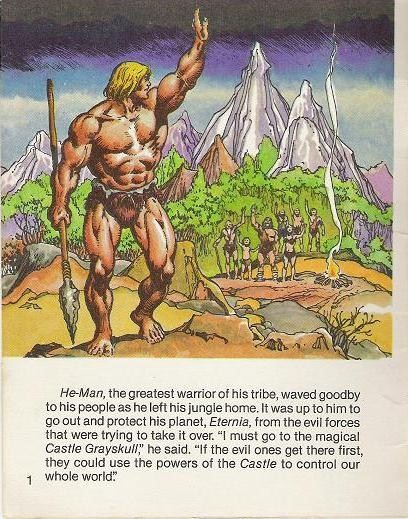 I know this guy is (or was) set in stone after making his appearance as “Oo-lar” in the new MOTUC bios, but he’s necessary enough to come in third on the list just because of the possibilities. First, and most importantly, he’d be sporting a brand new, longer-haired Alcala-esque headsculpt, which would match up perfectly with our Alcala Skeletor. For me that would be worth the price of admission alone. Getting a stripped-down He-man working his Jungle Boogie groove with his spear would just be icing on the cake. Call him Oo-lar if you really have to, but my collection won’t be complete without him. 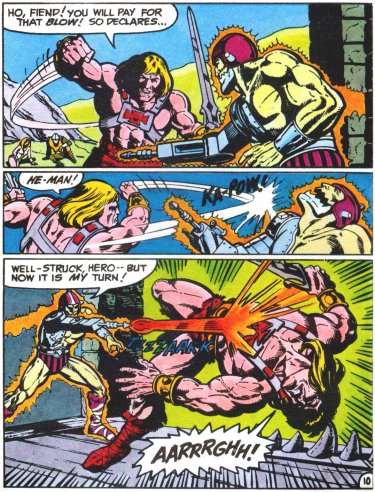 It pains me to put my favorite character on any list and not have him come in number one, and even as I write this, I’m fighting not swapping him to the number one spot. I think I’m going to call this one a two-character tie for first place, because both characters have such unique visuals in their mini-comic form. Trap Jaw has perhaps the most radical differences of any of the original figures, to the point where he could be a different character entirely. With his jaundiced skin, silver arm attachment and He-man styled boots, all the parts are there. They just need to be put together ASAP to give us this radically different version of one of the coolest MOTU characters out there. 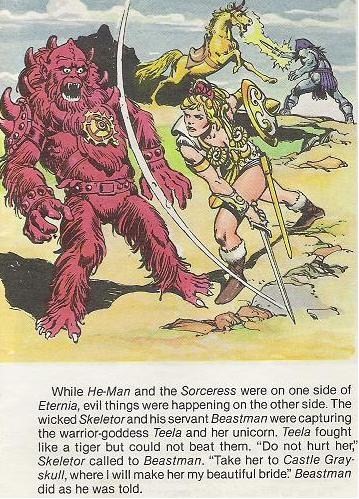 Eschewing the orange and blue fur of his original toy, the initial Mini-comics (and ads) presented a much furrier, all red version of the classic character. It was impossible to decide whether Beast-Man or Trap Jaw was more deserving of the tops spot, so though he’s being listed last doesn’t mean either one came in second. I’ve always had a slight twinge of disappointment that I never got the figure the mini-comics and ads promised, and although the Beast Man I ended up getting then and now is a perfectly fine representation and is, of course, the standard, this all-red creature has maintained a silent vigil in my mighty heart, if only because red’s my favorite color.

Have a differing opinion on who deserves a slot? Leave a comment! And, of course, you can discuss on the fwoosh forums!