I’ve always set aside some time each day to read comic strips. It’s a habitual ritual that takes maybe five minutes at most, but it’s essentially my version of zen meditation. Nowadays some of my favorite strips have been reproduced in lavish hardcover editions that I can keep on my shelf. But that’s not enough. Being a toy lover and one who digs plastic representations of concepts I love, it’s a natural progression to want toys of my favorite strips. Here are five comic strips that I’d love to have represented by highly-articulated toys.

Blondie is one of the oldest strips still being regularly produced that has retained a fairly high standard of quality. The gags never dip into the schmaltz of Family Circus or Hi and Lois, and the characters are neither preachy nor annoying. I’d like to have at minimum Dagwood, Blondie, and Dagwood’s boss Dithers, with lookalike kids Alex and Cookie and next door neighbor Herb being welcome if not totally necessary. Blondie’s a long running strip and deserves to be immortalized in plastic. 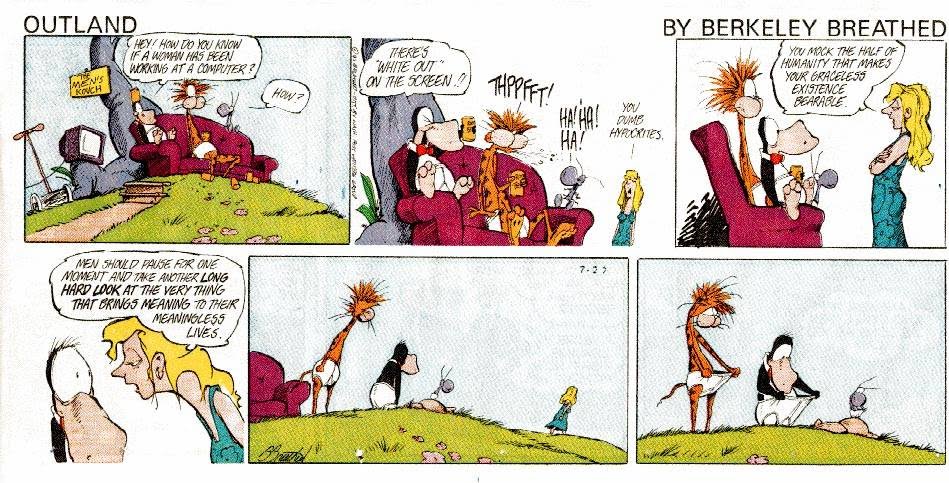 Beginning life as Bloom County before shifting gears to Outland and then making a final comeback as Opus (whose final panels may be among the finest and most poignant denouement a comic strip will ever receive), Berkley Breathed’s surreal, witty, hilarious strip is a treasure trove of characters that would make great figures. Opus and Bill the Cat to start, then follow that up with Steve, Ronald Ann, Milquetoast the transvestite cockroach, Oliver Wendell Jones, and Binkley. Each figure would have to come with multiple heads to represent the extreme expressiveness of their character. It’s the only way to get a proper “bugged out eyes” Opus or “hairball horking” Bill. That should hit the spot.

One of my two favorite current strips running now, Pearls Before Swine is the ongoing story of the slow-witted Pig and Self-centered Rat and the characters that orbit their world. I’d need Pig, Rat, Goat, Crocodiles, and their Zeeba Neighba (Zebra Neighbor, of course), Guard Duck, Snuffles the cat, and creator Stephen Pastis himself, who makes frequent appearances in his own strip, usually as he’s berated by Rat for his poor cartooning skills. Often with a baseball bat. 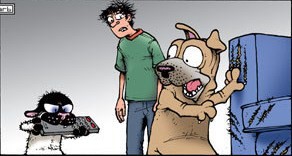 The second of my favorite current strips, it’s the story of Bucky Katt (the cat) and Satchel Pooch (the dog) who live with long suffering Rob, a slacker twentysomething whose hair is constantly mussed, probably because he has to deal with the extremely cat-like Bucky, who threatens to puke in his shoes at any given moment. Get Fuzzy is one of the best-drawn strips in the papers today, with pitch perfect expressions and timing. I’d need at least the main three characters, but I wouldn’t turn down a figure of Fungo Squiggly (the Ferret down the hall) and Mac Manc McManx, the British cat who drops by from time to time.

And finally, and most important of all:

The most toyetic comic strip this side of Peanuts, Calvin and Hobbes is the great tragedy. A toyline that has to exist but never will. I have the utmost respect for Bill Watterson and his ethical stance to never “sell out,” but this integrity means I’ll never have official Calvin and Hobbes toys. Double edged sword, my friends. Every single aspect of Calvin and Hobbes would make for great toys, from the long-suffering parents and teachers that make up Calvin’s world, to fellow classmates Susie and Moe. Then there’s the unstoppable amount of offshoots and versions of Calvin and Hobbes themselves: Calvin in Rocket ship underpants, Calvin as a tiger, Spaceman Spiff, Calvinball Calvin (with mask!), Stupendous Man, Tracer Bullet, Hobbes in a tie, Hobbes in a space helmet — I could go on and on. Calvin and Hobbes would go down in history as one of the greatest toylines in the history of shaped plastic. But it’s just not to be. Not officially, at least.

And that… that is just a damn shame.