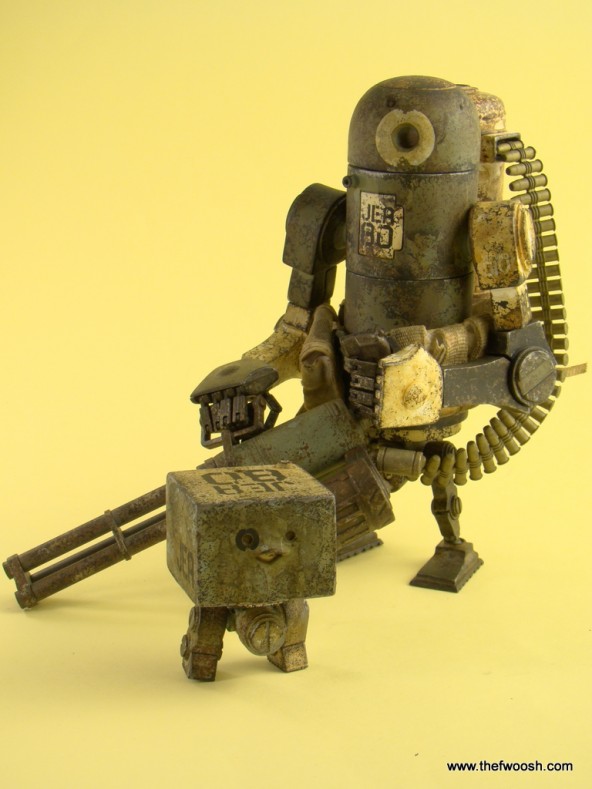 This Bertie and Square are from the retailer packs that were sold as individuals in April 2010. I managed to pick up mine last year off eBay for a sum, which was well worth it. This has to be my favorite ThreeA Toys robot to date. Standing 6 inches tall, this mean machine is made for action.

ThreeA Toys currently has three Bertie designs: the mk1, mk2, and mk3. The mk1 looks like the mk2, but has no feet; both stand 6 inches tall. The mk3 is different as it is taller, some 10 inches or so tall. It’s a larger version of the mk2, but loses a lot of its character in becoming a bigger bot. The mk2, at its 6 inch size, suddenly takes on a lot of personality when standing next to other figures. 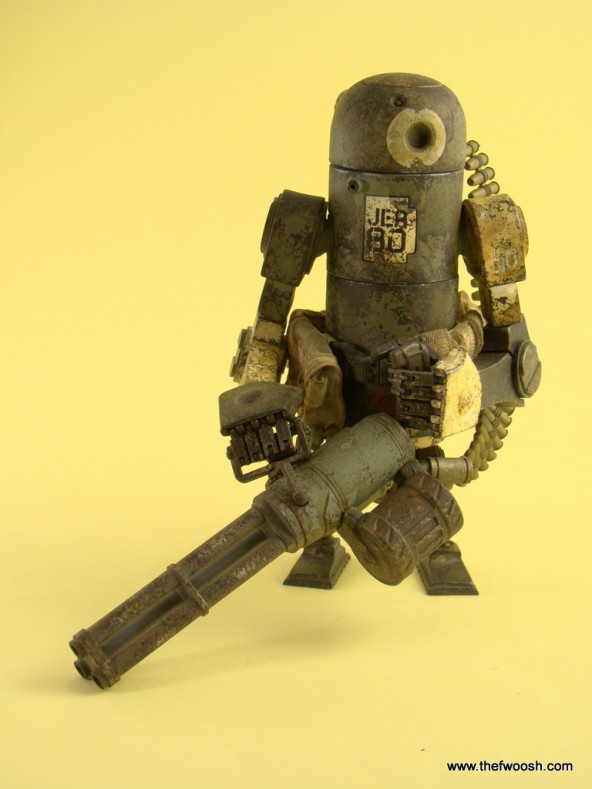 Squares are little walking boxes of death. They don’t kill, rather they gather battlefield intelligence and are used as weapons in psychological warfare. Their cute faces are a killer.

WWRp is the name for World War Robot portable, a line of robots based off Ashley Wood’s comic and the “portable” indicates the scale, 1/12 or 6 inch. Just about everything ThreeA Toys makes finds its way into one or the other scale. 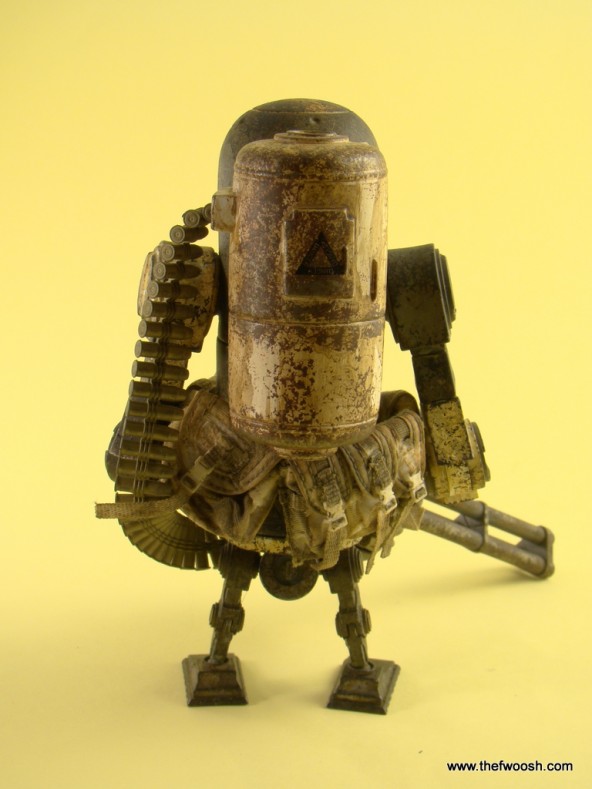 This Bertie is fashioned in the Marine JEA colorway, or paint variation, and is one of the more popular colorways on the market. He comes with a monster Gatling gun, ammo belt, and backpack for the ammo. Bertie is fully articulated with ball ankles, hinged knees, ball hips, ball shoulders, swivel biceps, hinged arms, ball wrists, ball fingers and hinged knuckles, and a swivel head —  he’s loaded with articulation. There is a ton of fun in posing this figure and one can spend a day playing with him. My kids have wars with my 3A figures the same way I used to have wars with GI Joes when I was a kid. 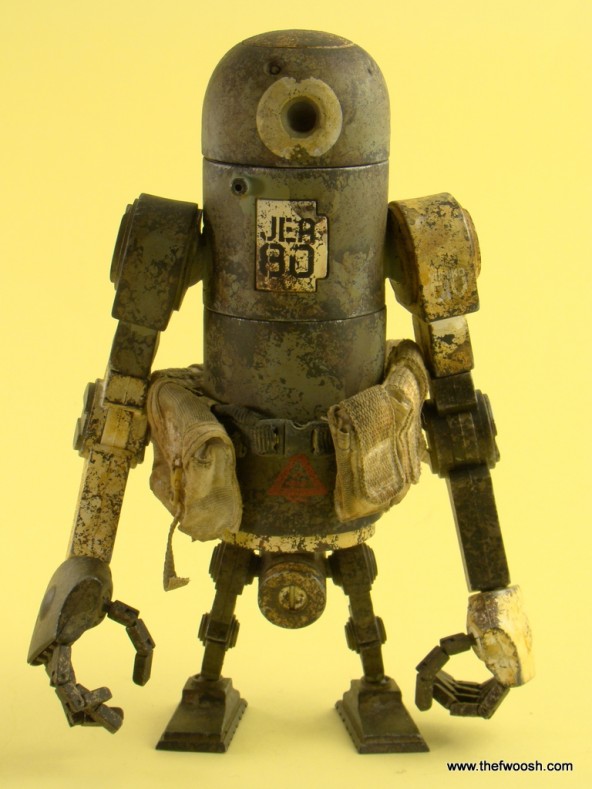 The sculpt is fantastic, and as I mentioned earlier, this is my favorite ThreeA Toys robot. The long body, stubby legs, and the monster sized arms, along with the domed head with a single eye provide tons of personality in this design. The fingers are really the best part; ever since Bandai started doing articulated fingers on their Gundam models, I’ve been a huge fan of this characteristic on robots. I’ve had no problem with loose finger joints or any joints for that matter. 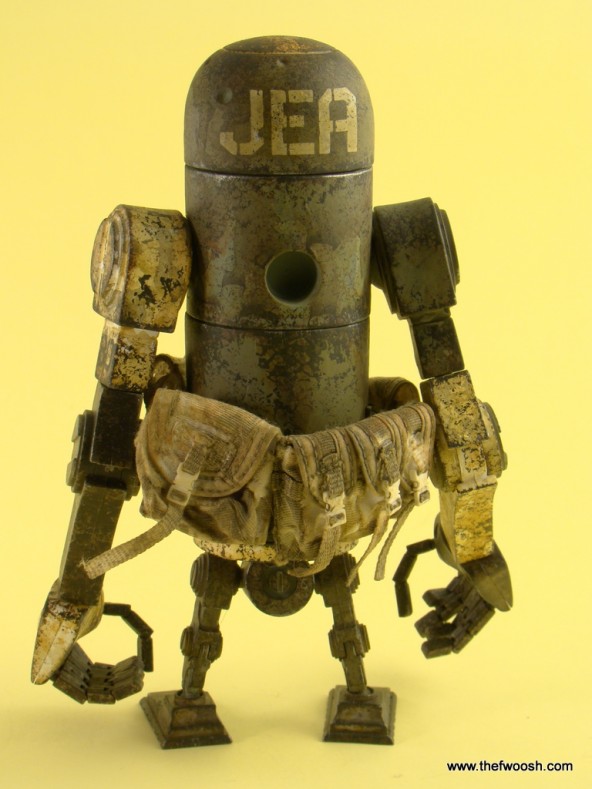 ThreeA excels at the dirty, rusty robot. I mentioned before that I used to make 1/35 scale military models and dioramas when I was in my teens. My focus was on tanks and soldiers, painting them to make them look realistic, and for the armors that meant a lot of layers, weathering, drybrushing, and washes. ThreeA takes all these classic paint techniques and puts them into each and every toy they produce. This figure is no exception. 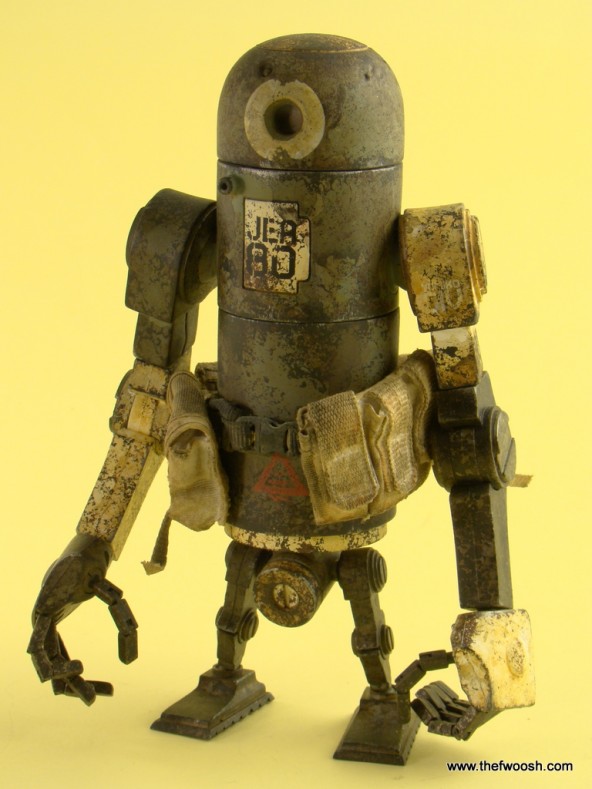 Square is a very simple figure. It’s a box with legs and a face. The legs are articulated at the knees, hinges, and hips, mostly ball and sockets, and that is it. A very simple figure. The box has a face — a childlike, cute face. A very disturbing face with lots of personality. He’s fun to pose with the human figures and you can have a lot of fun with him. 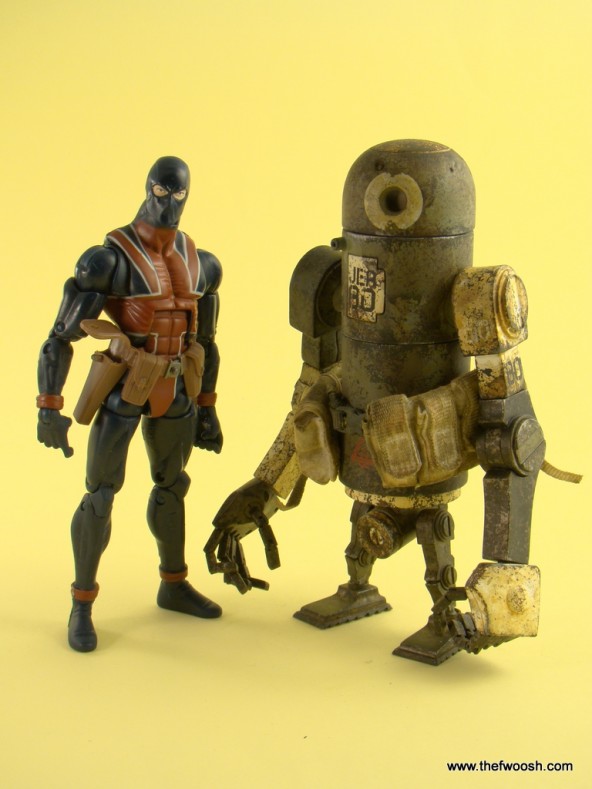 These are long gone from retailers, so neither BigBadtoyStore or Amazon.com have them in stock. If you can, I recommend that you scour eBay or other trade forums and pick up your Bertie today.

As always you can discuss this subject further on the fwoosh forums: http://thefwoosh.com/forum/viewtopic.php?f=91&t=85354 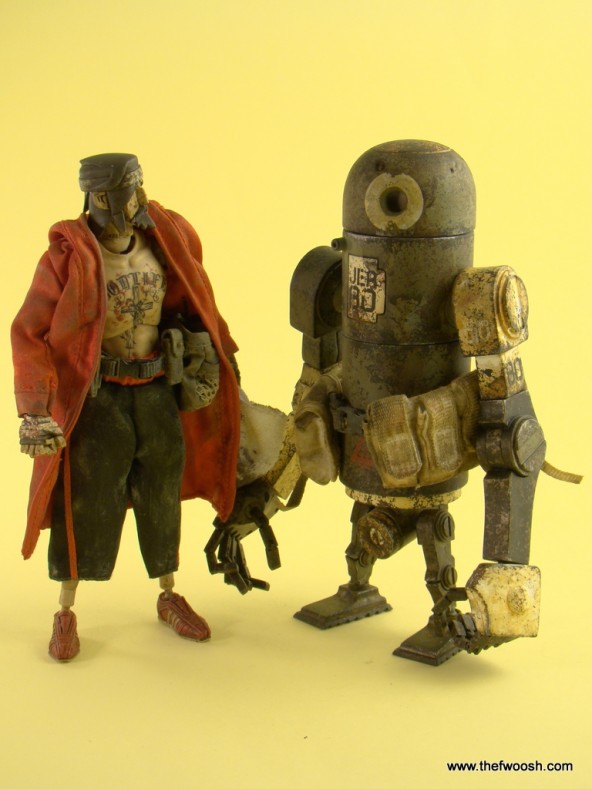 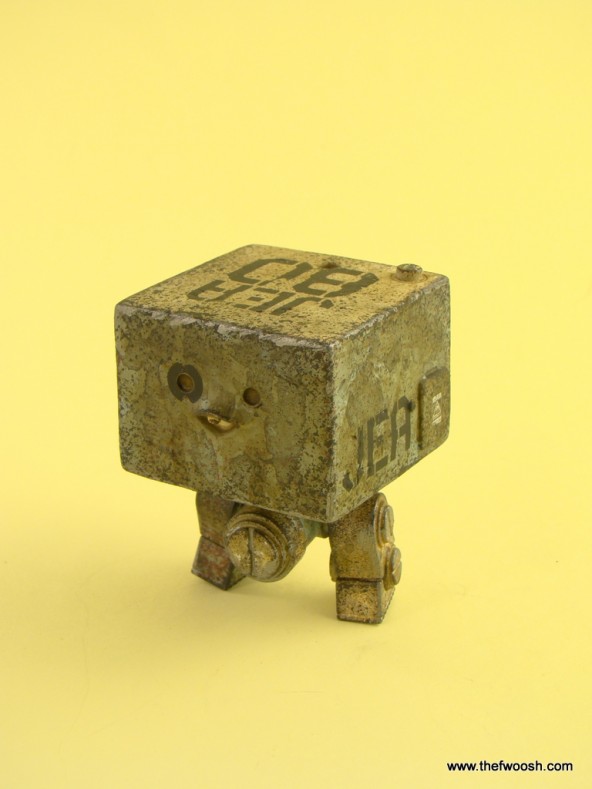 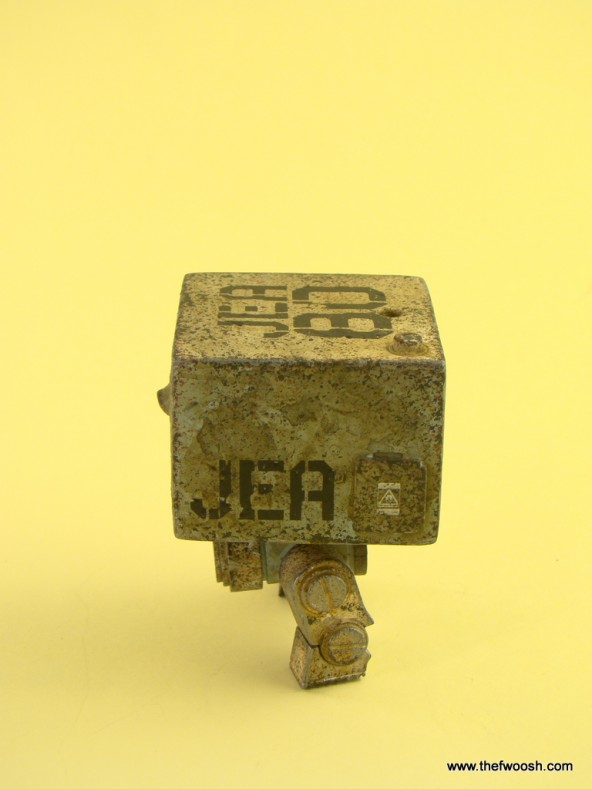 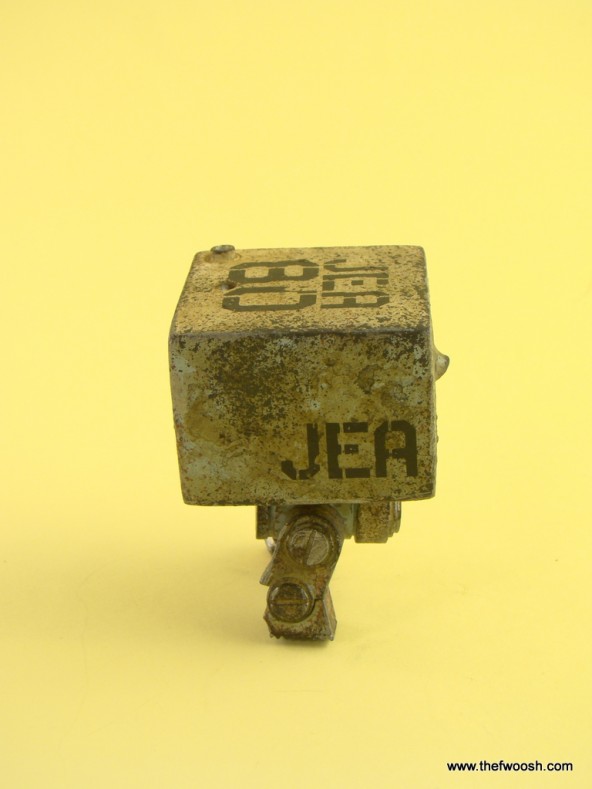 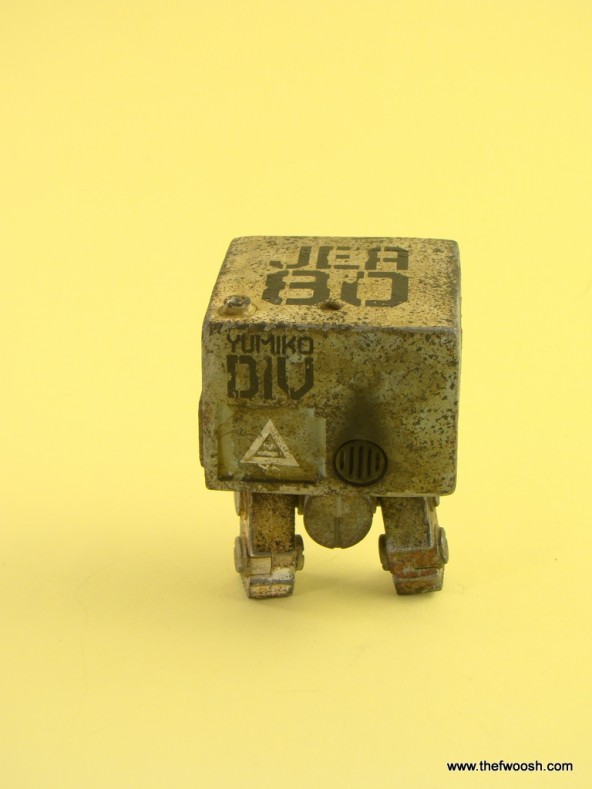 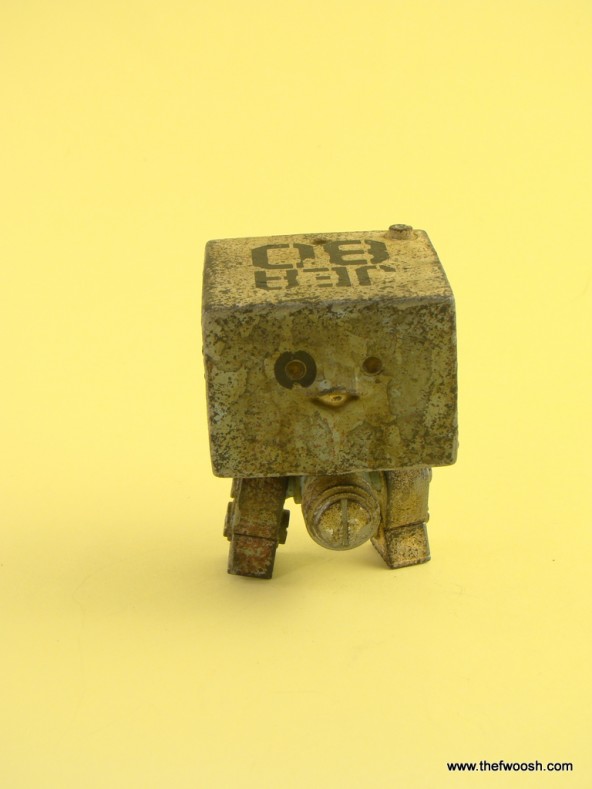 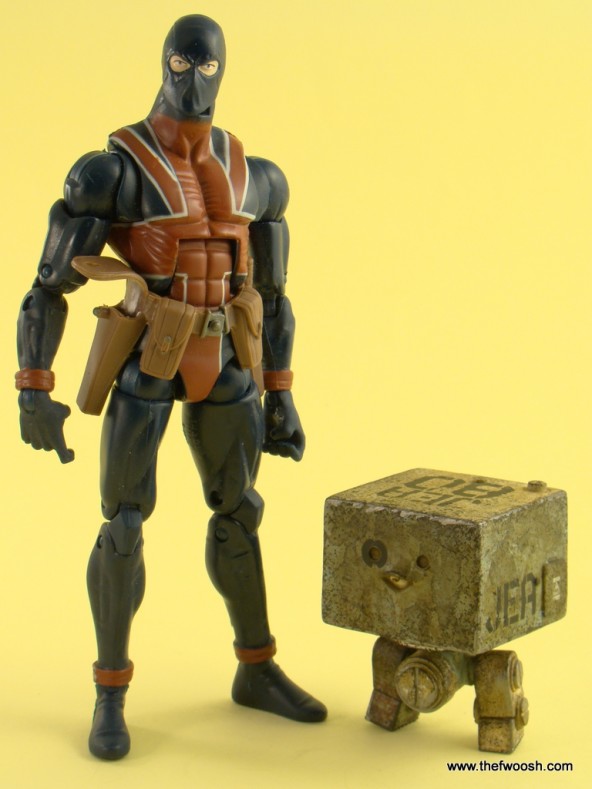 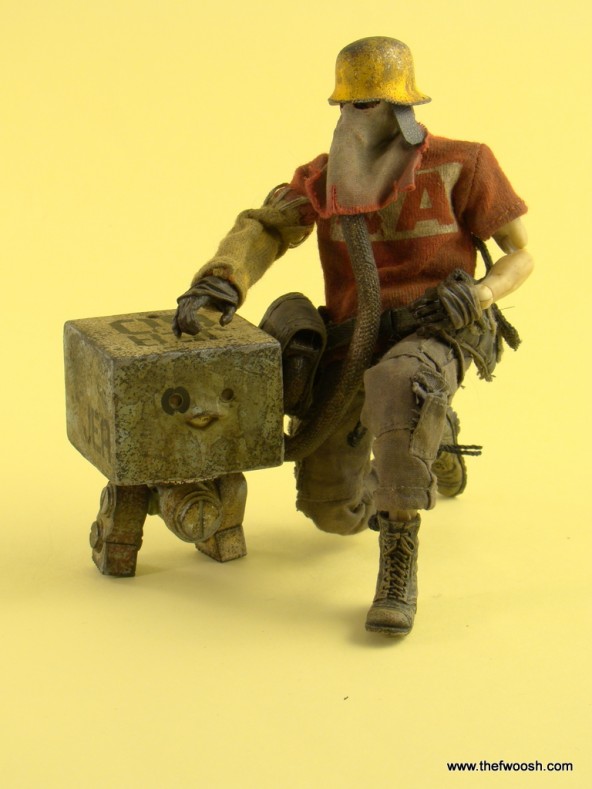