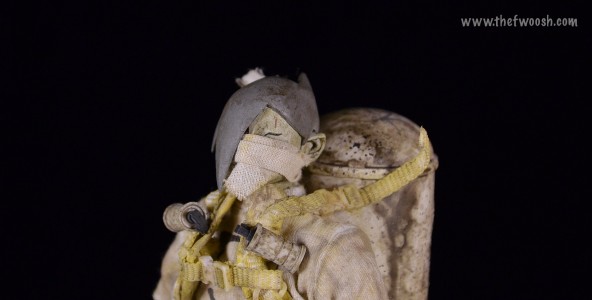 I can’t say this enough: the Slicers are the coolest Tomorrow Kings. The grenades, the tank/backpack, the bandana over the face, the electric swords — everything about these guys is just so freakin’ awesome. They are the badasses amongst badasses. When ThreeA had their Action Portable Slicers sale at Bambaland last year, I knew I was in for the whole schmear, but, in typical ThreeA fashion, there was a curveball. In order to pick up all three Slicers (Baka, Kyuu, and Interbaka), it was necessary to buy the box set containing all three — that was the only way to get Interbaka. Doesn’t sound like a big deal, right? It wasn’t, really, but what made it sticky was that there was also a ‘bot head that came with Kyuu if Kyuu was purchased as a single, and I’ve come to love the ‘bot heads, so I wanted the ‘bot head. Baka was also available as a single, so there were some options buyers had in terms of combinations: you could buy Baka and Kyuu as singles and get the ‘bot head, but not Interbaka; or buy the box set and get Interbaka, but do without the ‘bot head; or buy the box set AND Kyuu as a single and get Interbaka and the ‘bot head, but this meant getting stuck with buying two Kyuus. What shouldn’t have been complicated suddenly became very complicated for some, including me.

I opted for Baka and Kyuu as singles because I decided I wanted the ‘bot head more than I wanted Interbaka, a choice I stood by until the figures shipped and I decided Interbaka was a figure I was going to have to track down because I really did want the full set of three after all. Thankfully, the unofficial ThreeA Facebook BST came through for me and I was able to buy a MIB Interbaka for cost. 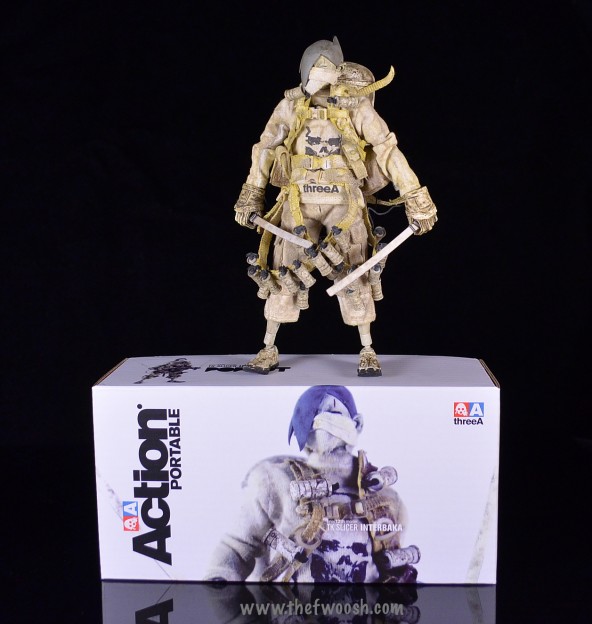 Even though Interbaka was exclusive to a box set, he was still given his own unique packaging, and I have to say I think I like the image of the figure on the box a bit more than the actual figure in hand. Like the Interheavy, I have issues with the yellow and beige colors that chiefly make up his look. The artwork on the box and the promo images that were solicited prior to the sale presented a figure that was mainly colored in a greyscale, but what we got was a figure made up of tans and yellows, with precious little grey to him at all. 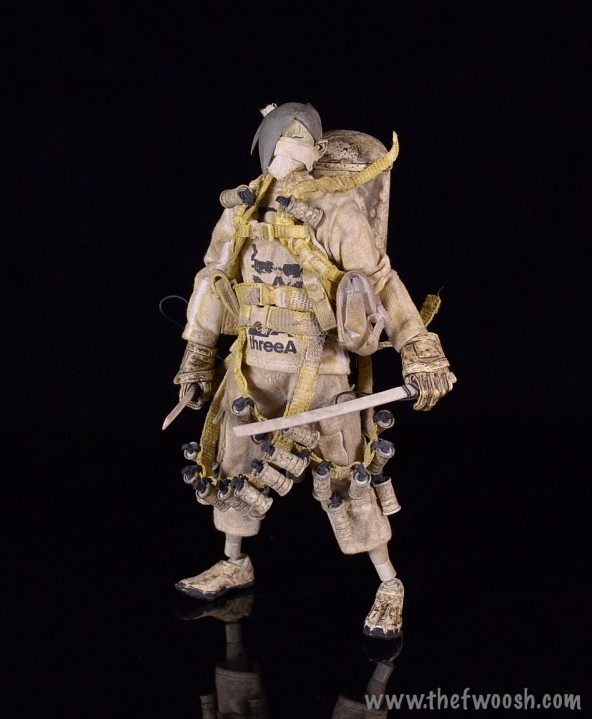 Instead of looking like a grey/white/black android, he really looks like the Slicers’ desert warrior, or something to that effect. I guess I can live with it, but it really isn’t what I thought I was buying, so it’s a bit of a bummer for me. However, I’m sure some collectors will be stoked about this deco, especially those who collect the desert-themed WWRp ‘bots. He looks as though he’d fit right in with a desert squadron. 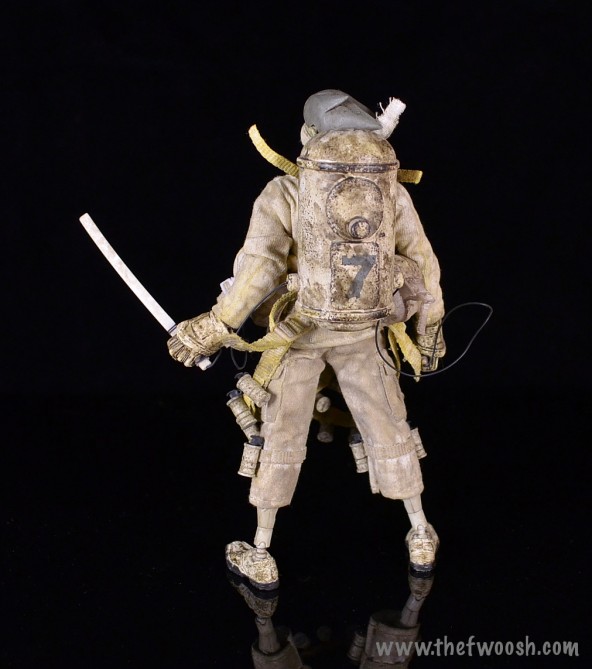 The tank on his back looks nice and war-torn. It’s one of his cooler features because, when I look at it, it serves as a link to the WWRp ‘bots and characters. Even though the Slicers are Popbot characters, this allows for some cross-brand potential, especially for collectors like me who like to put everything on the same shelves regardless of line. The Slicers look great amongst any ThreeA property. 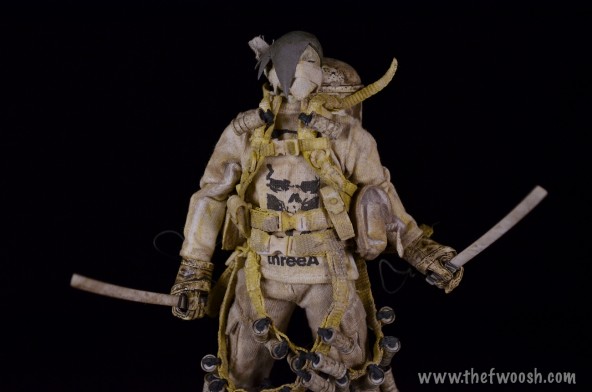 The skull on his shirt peering out through the straps works really well here. And then there’s the not-so-subtle “ThreeA” plug that appears beneath the straps — that can be hidden behind the straps if you want, fortunately. 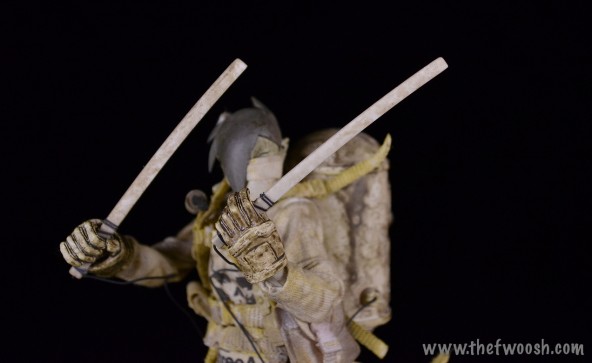 His blades are interesting because they look as though they’re made of bone rather than steel. So maybe they’re electric bone swords? Doesn’t sound like the sturdiest of weapons, but the idea that he fashioned bones into swords is a compelling one. As per usual, we don’t know enough about the character’s story to know what the swords are actually supposed to be made of, so it’s anyone’s guess at this point, really. I’m going with bone. 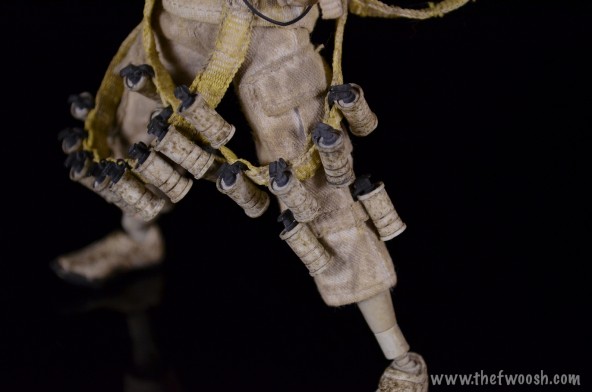 One thing is for sure — the Slicers come armed. That is a lot of grenades. 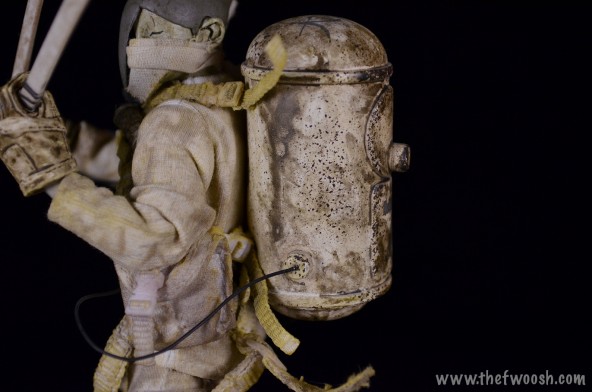 The weathering on the tank looks as convincing as always. Good stuff. 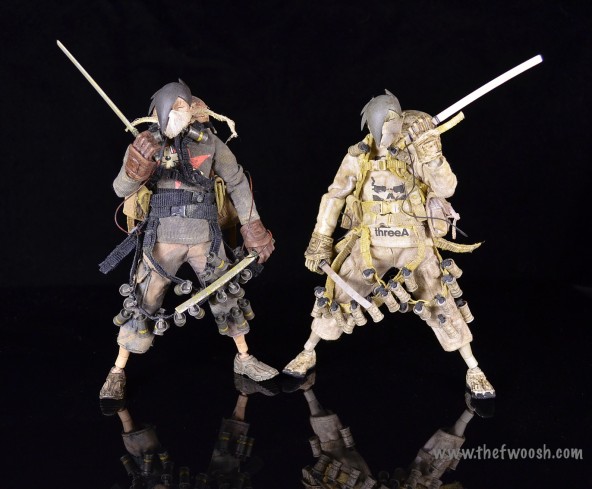 Here we see the Interbaka compared side by side with the standard Baka. The Interbaka’s yellowed straps looks even more yellow here — they don’t necessarily look “weathered,” just yellow. My eye is just drawn to the yellow like it’s a magnet, which I think is a bit unfortunate because it’s not the figure’s strongest feature. 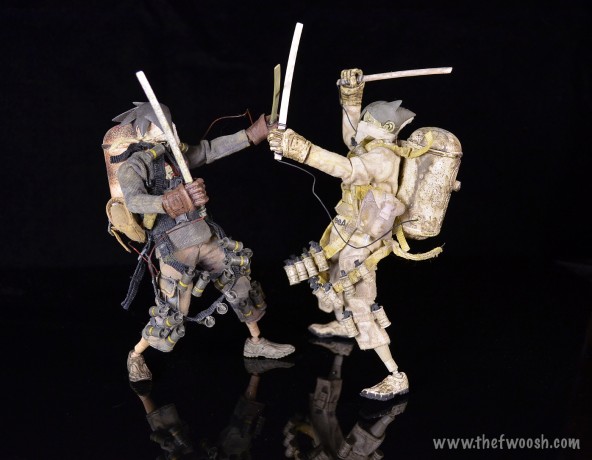 “The devil you say!” 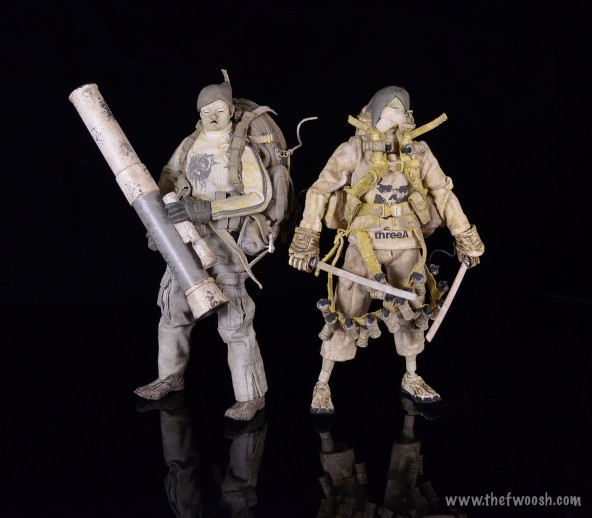 In my review of the AP Interheavy I complained about the figure being too yellow, but compared to Interbaka here, the Interheavy doesn’t look very yellow at all — that’s how yellow the Interbaka is. The Slicers are fantastic figures any way you slice it (pun intended), but the colors this guy is sporting just aren’t doing it for me. If you’ve got Baka and/or Kyuu, then I’d recommend keeping them and not worrying about tracking down this guy because I found him to be a bit disappointing in comparison. But if you’ve got any kind of completist tendencies, or if you’re just a fan of the “Inter…” figures, then you’re going to want to hunt him down to complete your set, if you haven’t already. If this is the case, then eBay or any of the unofficial ThreeA BSTs are your only bet at this point since the Slicers sale happened months ago. This figure is definitely a mixed bag, but I’m sure there are those out there who were more impressed with it than I was. Let me know what you think.