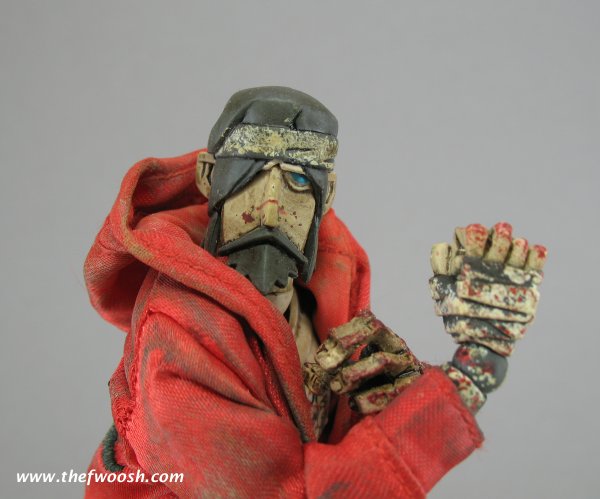 So yeah, it’s Jesus, and he’s an action figure. He’s also a mass market figurine sold in every gift shop everywhere. Now that we’ve gotten the offensive stuff out of the way, let’s carry on with the review. 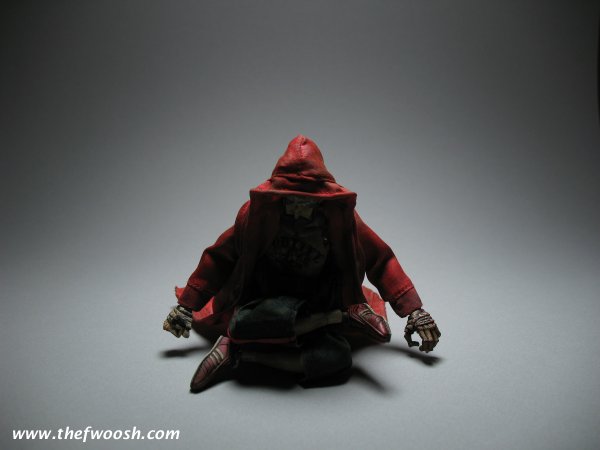 As is usual with 3A products, Fighting JC was initially offered as a 12-inch figure, allowing those of us who only collect the 6-inch scale offerings to admire it longingly and wish for it to arrive in the handy-dandy portable scale. When it was finally released in several savior-flavors, all that remained was choosing which one. Angering up the blood is that after the singles were put up on Bambaland, a boxset featuring all of them went up. Unfortunately, I had already made my order for two and didn’t want to go through the hassle of canceling one order to order the set, so I had to make do with just a pair, one of which was Palm in the Face Fighting JC, a variant of the regular edition of the Fighting JC. 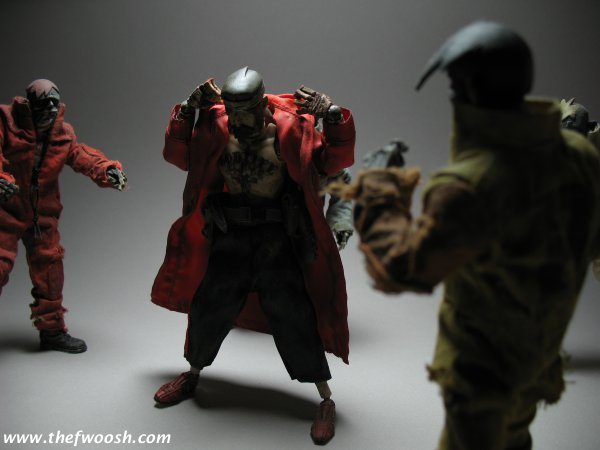 Palmy is essentially the same figure as regular Fighting JC. Same face and hands which are unique to JC, and the stock 3A body, which is exceptionally articulated. The differences come from his clothes: a full orange-red jacket with shorter pants that are prepared for the sudden breakage of a water-pipe somewhere in the basement. 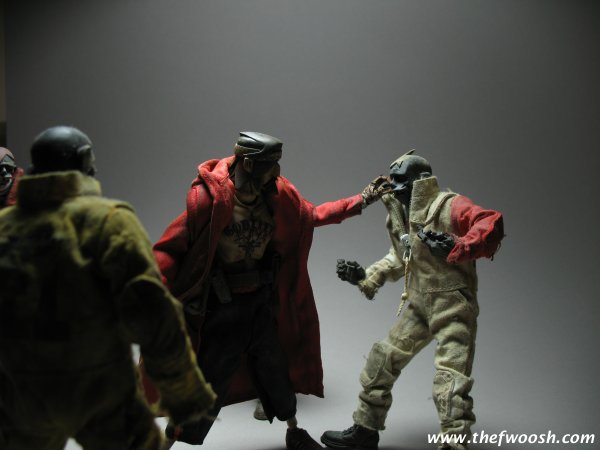 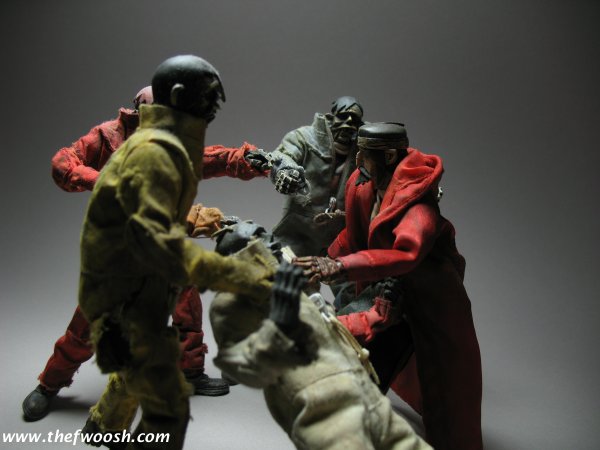 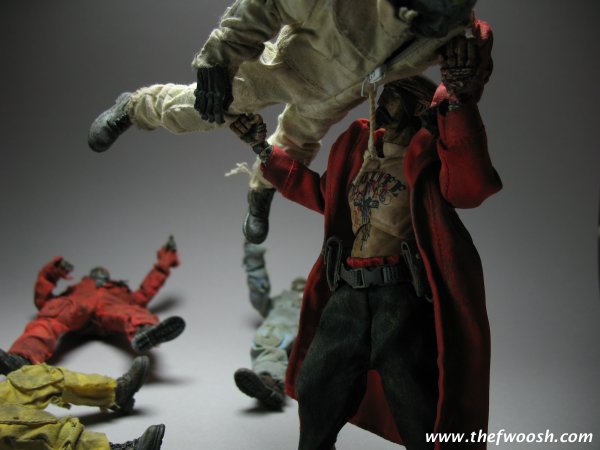 As I said, the body uses what has come to be the stock articulated 3A body. I tend to prefer the figures that use the dePlume-styled combat boots, but while JC has the double-ball jointed ankles that have proven to be troublesome on other figures, I didn’t have any problems with them popping out while posing him for pictures. JC arrived with one foot detached, and I shuddered at the inevitable constant foot-loss I’d be facing in trying to put him into even the simplest of poses, but when I popped the foot back on it fit in snug and tight with an actual popping sound. I don’t know if they’ve made improvements or if they just got lucky, but JC’s foot stayed on throughout his photo session. It’s a welcome change, and it adds to the extreme pose-and-play value JC has. 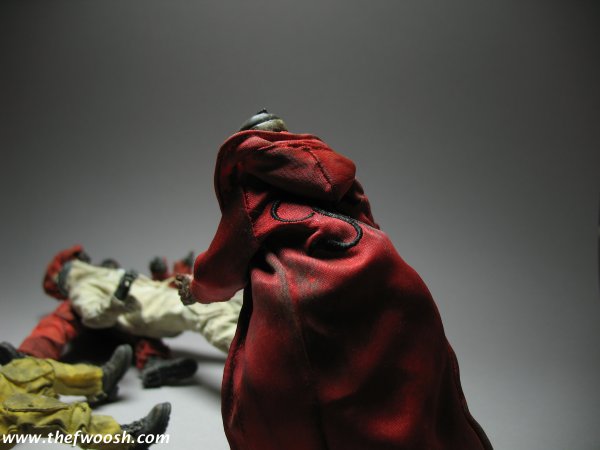 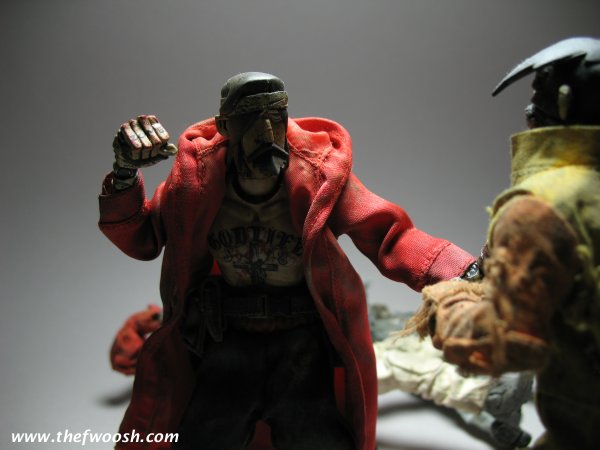 JC has one sculpted fist and one sculpted “angry pose” hand, either for grabbing or threatening, or… force choking a bitch, I suppose. Who knows. He’s probably got some powers. Freaky powers. Jeeeeesus powers. Both hands have sculpted tape wrapped around the hand and up the arm. He looks tough, like he’s ready to go to town on somebody’s face. And if there’s any doubt what he’ll be targeting with that fist, the letters Z O M B are scrawled across each finger. That’s a clue. No love for the dead here. Irony. 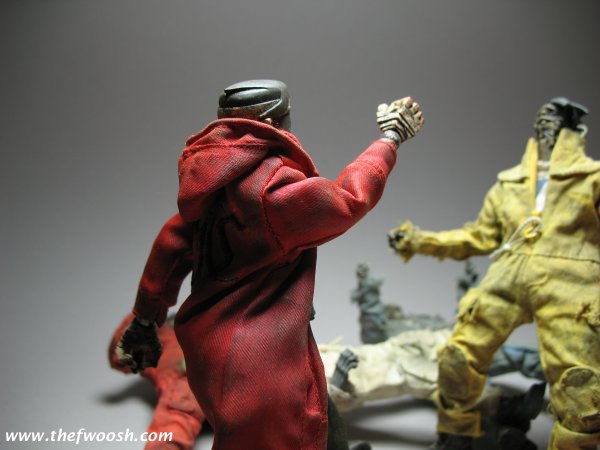 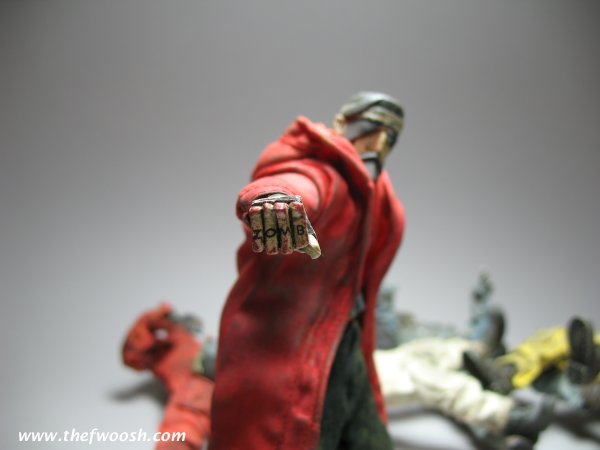 The tattoo work on his chest and elsewhere are all authentic looking. He looks dirty and gritty; Jesus ain’t got time for showering when there’s undead to kill. Quiet, or Poppa spank, and so forth. Plus, he comes with a severed Zomb head. Actually, it looks like it was pulled right off the neck… 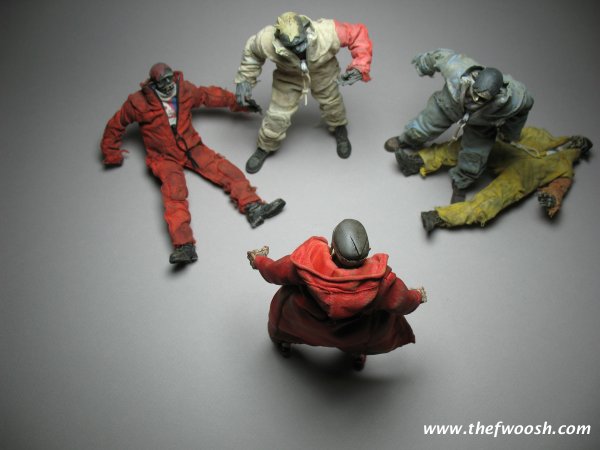 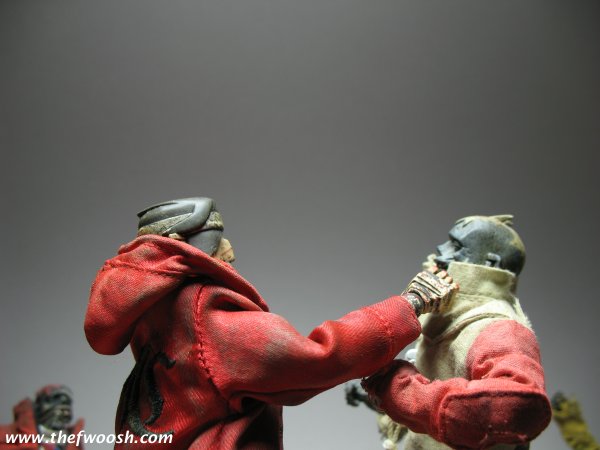 His dreamcoat has a wire running though it so it’s fully poseable, which allows for plenty of baddass “hood up, hood down” poses, in addition to running with it flapping behind him, or spread out, or anything you can think of. It’s a nice added feature that adds to the fun. 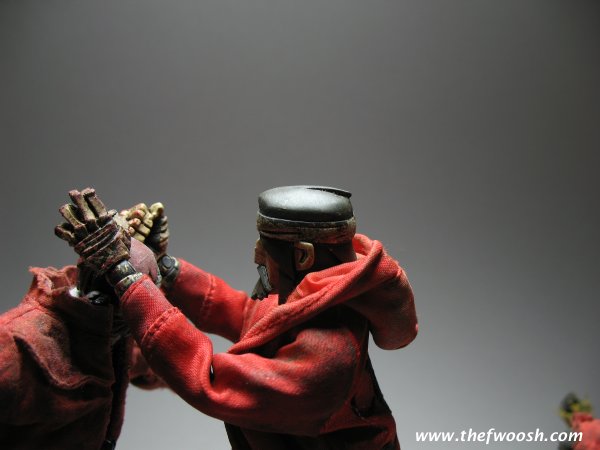 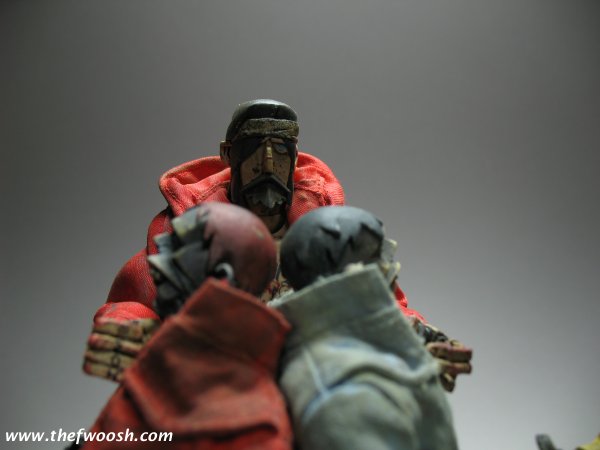 I’ve gotten a little fatigued with some of the 3A offerings that have the same head over and over, so even though it’s the same body, it’s great to have, with just a few choice improvements, what seems like a different character completely instead of a different version of the same guy. 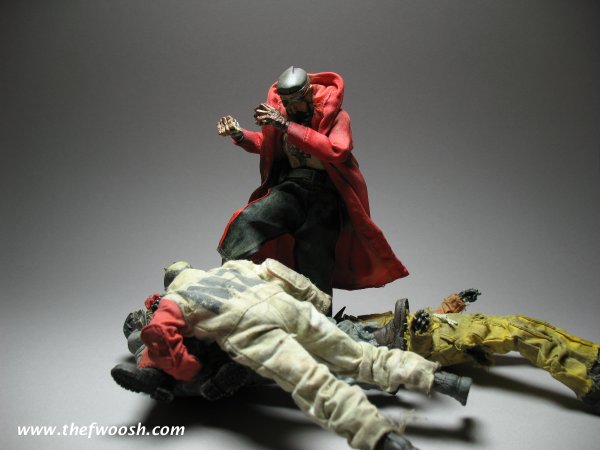 As with every 3A offering, JC was a preorder that went on sale last summer, so eBay or some charitable sort that wants to part with one on some trade board would be your best bet for securing your very own Fighting JC. 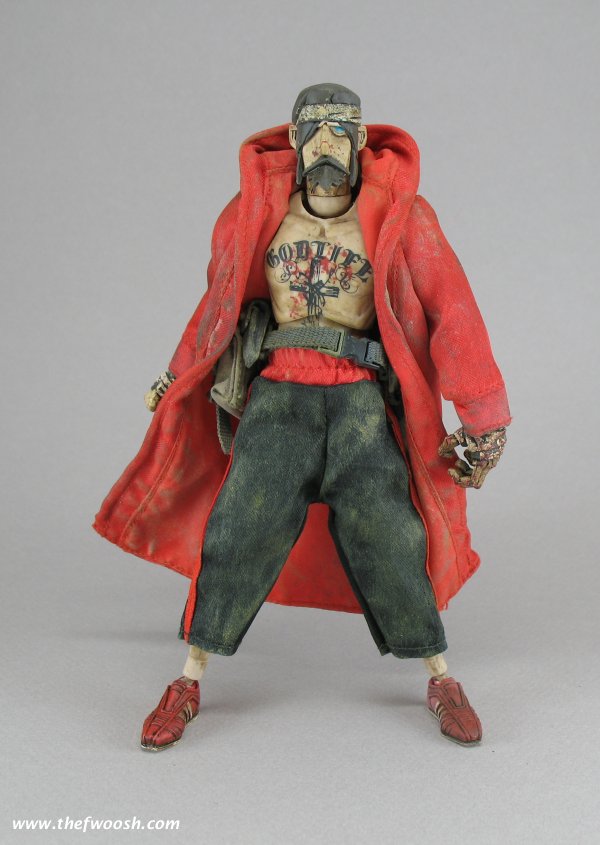 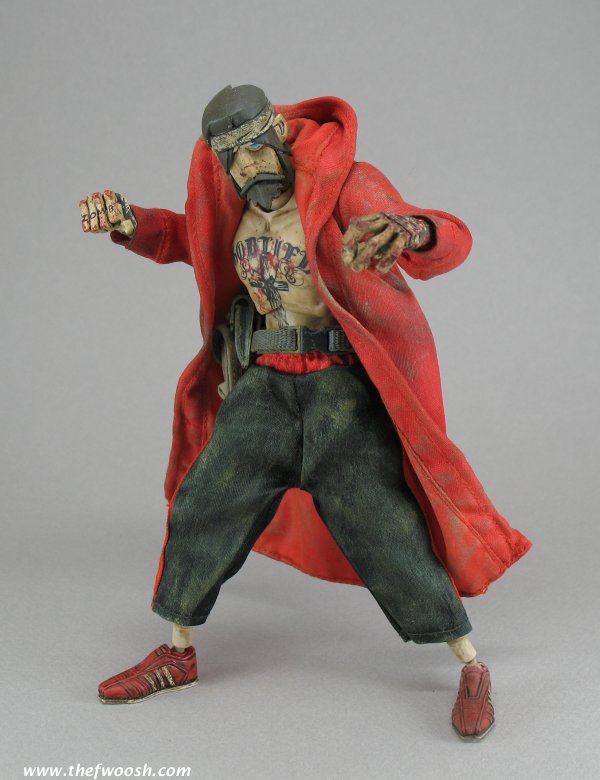 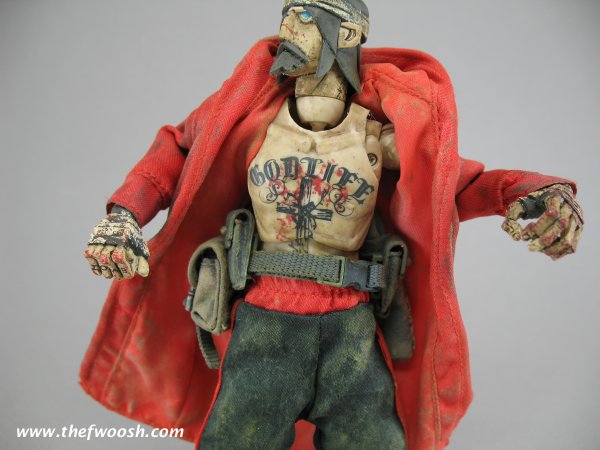 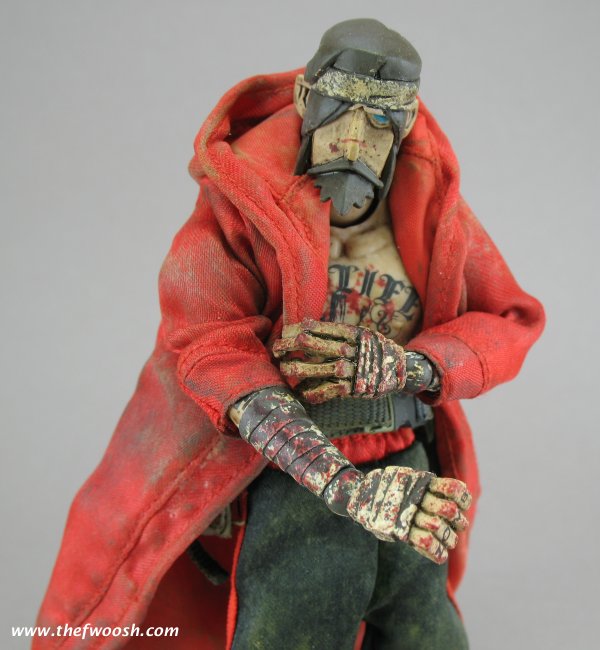 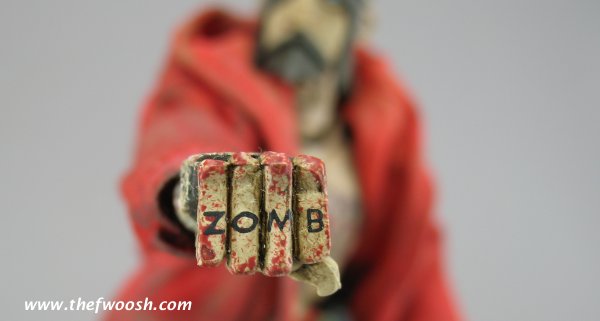 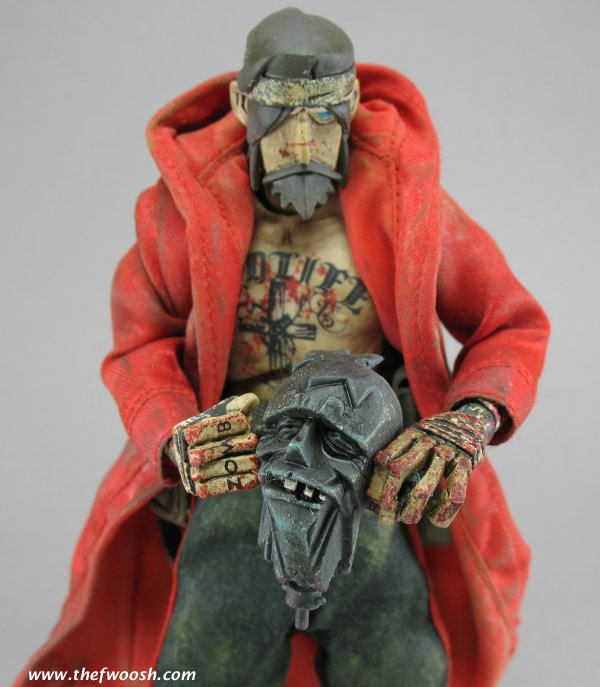