The Action Portable Interheavy Tomorrow King was a surprise drop during the World War Robot Portable Barguest and Fantome de Plume sale last October on Bambaland. With luck on my side, I was able to sneak in an order for two of them during the sale the one and only time I saw the listing go up. I actually didn’t mean to order two — during the frenzy of trying to catch the surprise drop, I somehow managed to add two to my cart and was too far through the check-out process to do anything about it. This ended up being something of a happy accident, though, since it turns out there are two variants of the Interheavy, and I ended up with one of each. 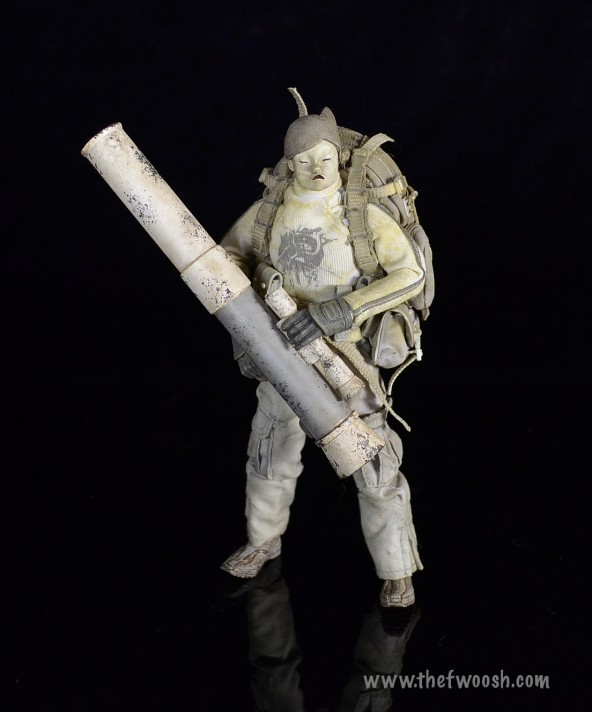 The “Inter-” figures — Interheavy, Interloper, Interbaka, etc. — are basically just grey-scaled versions of their respective standard releases. Their quantities are generally limited, and the story behind them is really the only thing they really have going for them.  Well, when I say “story” I guess I really mean “idea” since a full story hasn’t really been fleshed out yet. 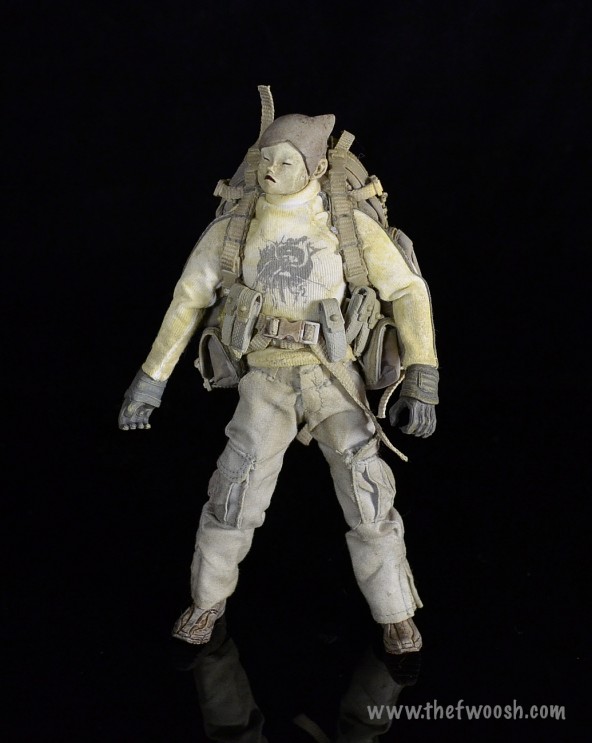 They’re supposedly androids who were created by the Mortis to infiltrate the ranks of the Tomorrow Kings with the intention of destroying them from within. Seems cool enough, but it raises so many questions as to the logistics of such an endeavor that I figure it’s best to just go with it for now until a fully-realized story makes its way out. 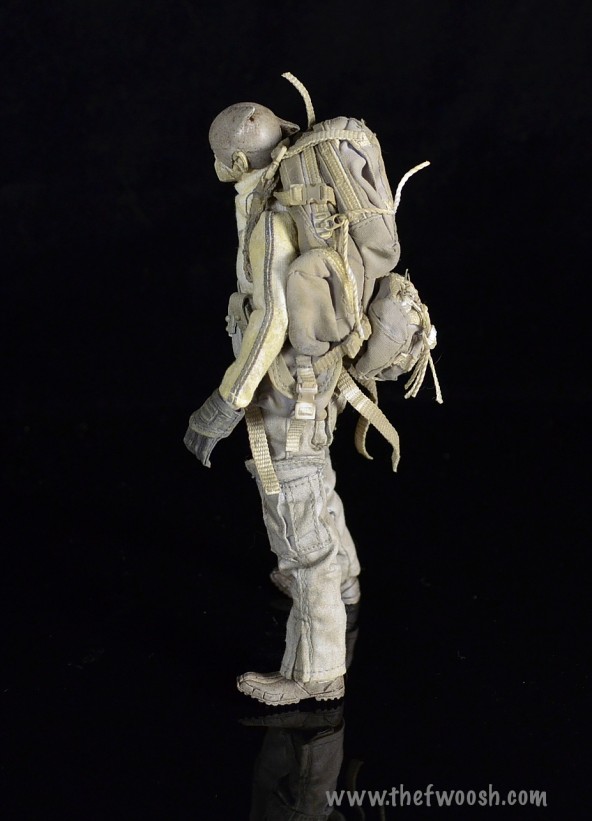 If you’ve already got a Heavy Tomorrow King or two, then you basically know exactly what to expect from this guy: 6-inch scale, great articulation, lots of gear, lots of straps, and a big ol’ weapon. Given the size of the pack(s) he wears on his back, it’s surprising he isn’t more back-heavy than he is. It’s not that difficult to balance him well, so that’s a big help when it comes to posing him. His pants are also much better than what we usually get with 6-inch scale figures from ThreeA. They’re not restrictive at all and he can be posed in just about any way you’d like him to be. 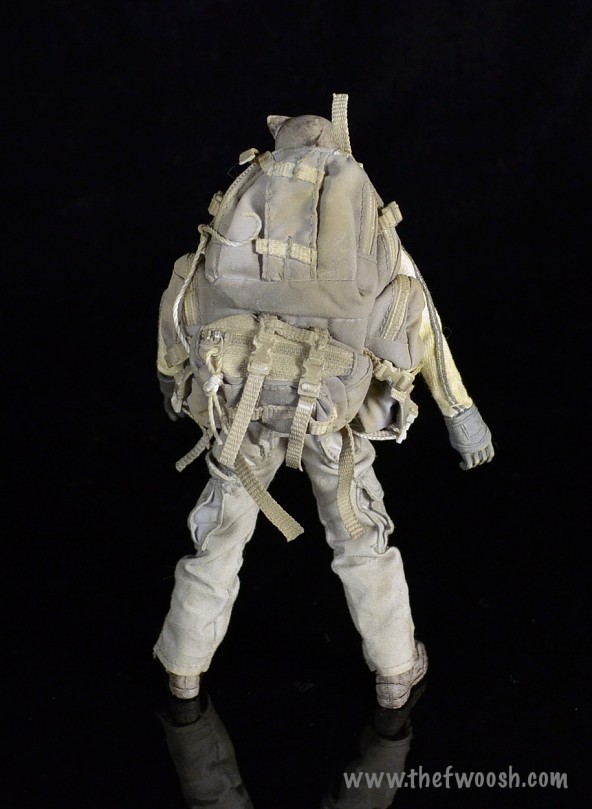 The weathering effect is achieved mainly through what looks like a degree of “yellowing” here. Since all the colors dedicated to this guy are shades of grey, the yellow does add some contrast, but, to be honest, I’m not sure how much I really like it. I think I would prefer just the greys with some black and white to achieve depth and contrast, so I’m not sure what the yellow does aside from making him look somewhat sweaty. But he’s an android, so does he actually sweat? Or is that supposed to aid the illusion so he can pass as a TK? Like I said, the logistics here raise all sorts of questions if you think about it too much, so I’m gonna stop right here and just try to enjoy the figure as it is. 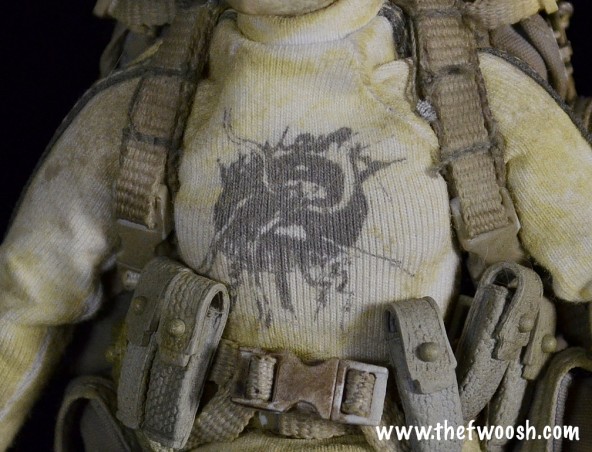 All the Heavy TKs come with unique designs on their shirts and the Interheavy is no exception. I just wish I could figure out what it’s supposed to be. When I look at it all I can think of is “killer tomato.” 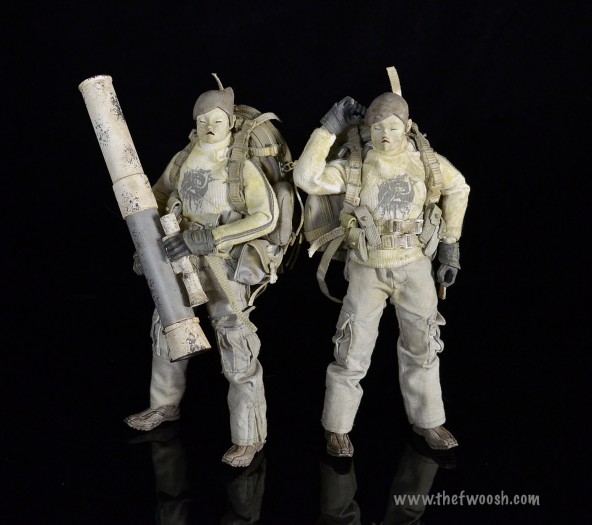 Now, as I mentioned before, there are two different versions of the Interheavy, but the only difference is their hair. Everything else is identical. 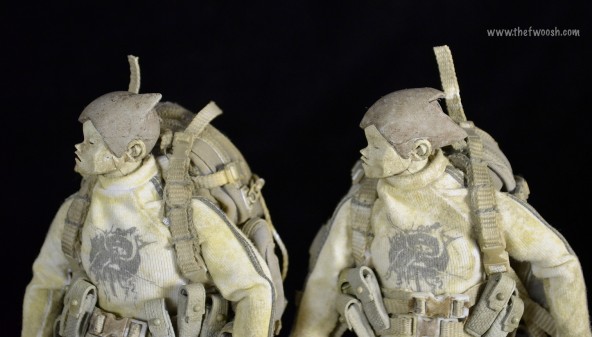 The boxes, both the shipping box and the actual product box, come with either a green or red dot on them that indicates which of the two you got. The difference is really only noticeable when the figures are viewed in profile, so it’s not that big a deal. It’s enough for me to justify keeping them both, but if I didn’t get them both via blind luck, I’m pretty sure I wouldn’t bother tracking down the one I didn’t get. This is the sort of thing that’s going to appeal mainly to line completists since the differences are negligible, so your mileage may vary with this one. 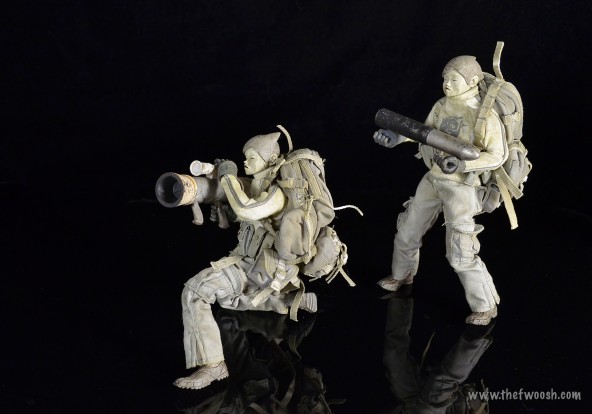 In addition to the bazooka, each also comes with an artillery shell, one that can’t actually be loaded into the weapon. I’m always happy to get accessories with my figures, but this shell is basically useless. It’s just one more thing to either keep in the box or to display on the shelf loose next to the figure. 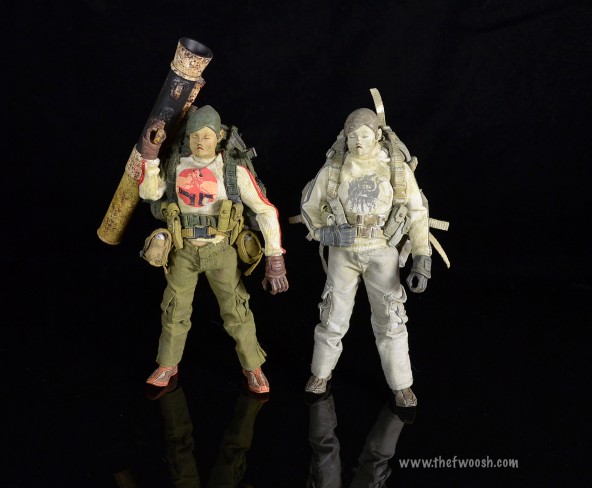 He’s a nice-looking figure, but when he’s compared to a standard Heavy TK, like Kato in the above pic, it becomes immediately clear just how drab his colors really are.  He really does look a bit boring in comparison. Still, I like the idea behind the figure and maybe that’s really all that matters. As for a recommendation… I don’t know. There are going to be those who love the color scheme and the idea behind the character, and then there are those who are going to look at him and just think he’s boring. I think I’m somewhere in the middle — I’m happy to have him, even both versions, but I fully admit and realize he’s not much to look at in comparison to the originals.

Unfortunately, the Interheavy was a surprise sale that happened months ago, so if you’d like one or two, then eBay or the various BST boards are the only way to get the figure at this point. Happy hunting!