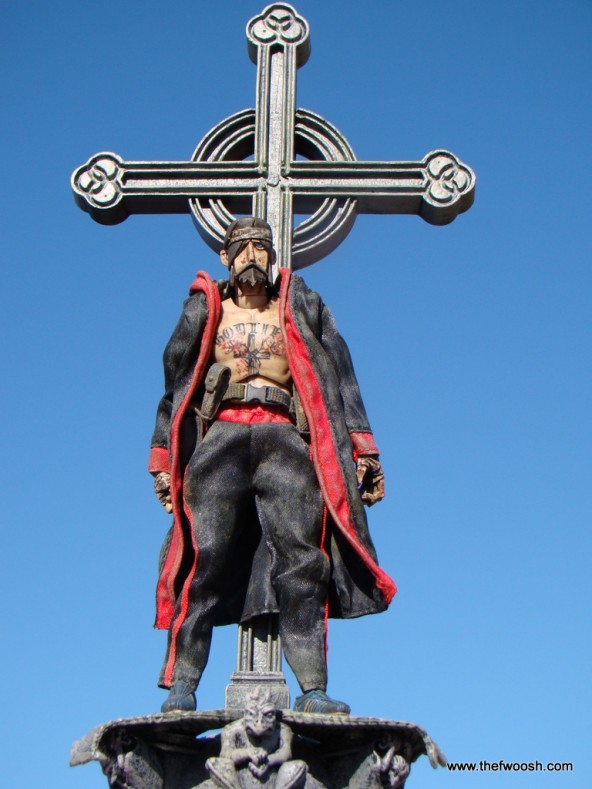 Ibentmyman-Thing recently took some fantastic pics and wrote some amazing words for his “Palm in the Face” Fighting JC review from the ThreeA Toys Fighting JC 4-pack. I’ve taken some not-so-fantastic pics and have written some mediocre words for my review. My review is based more on a follow up to the review that I did back in 2010 on the 1/6 scale Fighting JC that was also my “figure of the year” that year.

One of the key reasons I love this figure and character is the basic fact that it represents Jesus Christ who’s been sent down to Earth by his father God to sort out the zombie and monster mess. I mean, that concept alone is fantastic. I know there are people out there that think the concept described is a crime against Christianity, and that having a JC figure is damnable. I wouldn’t know; I’m baptized a Catholic, but I’m not confirmed, and when I finally *had* to go to Church on Sunday I was in high school and only went to ogle at the hot cheerleaders and dance-squad girls I went to high school with.

But let’s face it — JC is the ultimate superhero. Technically, isn’t Superman and every other extremely super-powered being that was ever created just variations on JC or saints or mythical heroes? Why not just cut to the chase and make JC the hero on Earth? Done. Now put him in the middle of a zombie apocalypse. Done. Make him leader of a team of adventurers. Done. Let the awesome begin. Done.

This is one reason why I love the figure, it’s a conversation piece. You can bring him out over a glass of wine with friends and have a great debate about the figure. Or argument. Or fisticuffs.

The other aspect of the figure that I love is the design. This is an amazingly well-designed toy. The figure is the standard buck from ThreeA Toys, which has been covered a million times before and it will be covered some more — but not today. The thought put into the design — the actual execution and manufacturing — is simply amazing. No joint issues, no wardrobe issues, no paint issues. This figure is perfectly executed and it is a joy to have not just one, but five versions of him sitting in my house.

I was worried about how the figure would come out during its journey from 1/6 to 1/12 and the only “complaint” that can be made is the face seems out of focus. I’m not certain if it is the paint or if was the production process, but the face seemed to lose a little of the pop that makes the 1/6 scale version really stand out. I even looked for serious flaws in the clothes, and I found very few. Maybe a little bit of ballooning at the top of the pants. But, honestly, that’s nitpicking — and I mean to the extreme. All things considered, and with everything that could have gone wrong, and didn’t, this figure is perfect. It is exactly what I’ve been wanting since 1/6 JC landed in my house for a few nights. This figure is so perfect that I’m not certain there is a reason to continue collecting toys.

The concept and execution are something that I’ve always wanted in a toy. If all my toys had this level of, for lack of better word, love put into them, it would be awesome. This figure is like the ultimate love letter to toys everywhere. The tattoos that were perfect in 1/6 are just as perfect in 1/12, and I mean perfect. I don’t know what kind of shrinking ray gizmo ThreeA Toys have in their back room, but I want one. All the tattoos are beautifully done. They look fantastic. Even the “Z O M B” on JC’s fist.

There you have it. Another figure that I am in love with, Action Portable Fighting JC. Like Zombkin, Fighting JC is another breath of fresh air in the superhero-dominated action-figure world.