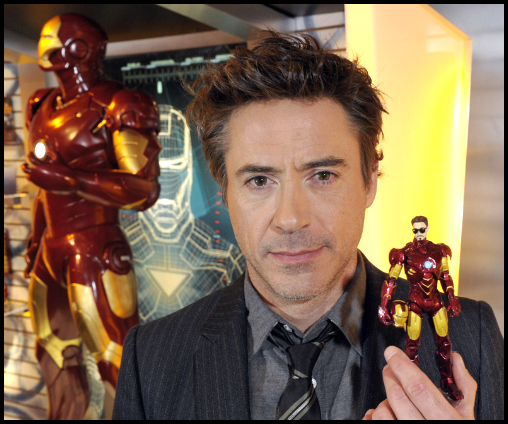 Iron Man has done pretty well for himself as far as toys go. Just walk into any Wal-Mart or Target and behold his ubiquity — the pegs are full of masks, ARC reactors, repulsor gloves, and, of course, action figures. Iron Man has headlined several series of action figures, starting with his 1994 Toy Biz line all the way up to today’s Iron Man Legends. One entirely valid criticism of the recent Iron Man line is that there aren’t enough villains. Sure, we have less-than-stellar versions of Titanium Man and Crimson Dynamo, with the Mandarin and Iron Monger on the way, but Tony still has loads of rogues yet to be represented in plastic form. Here are ten we can safely assume will never make the cut. 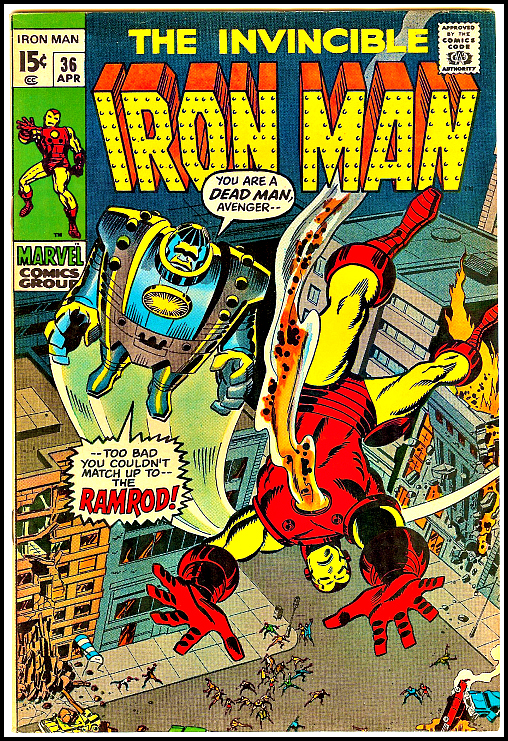 “Too bad you couldn’t match up to the Ramrod!” Okay, Dirk Diggler, no need to rub it in. Iron Man has fought some pretty lame villains, but this guy takes the cake. He’s downright bloated, which is very unbecoming on a robot. But maybe I’m being insensitive — after all, shedding the baby weight can be very hard. 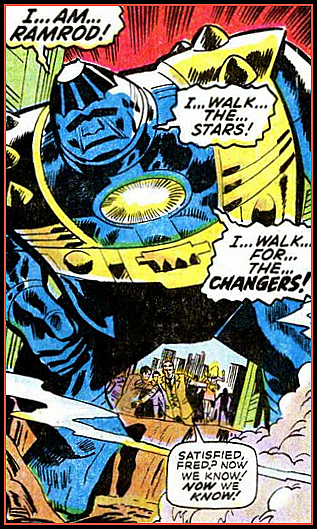 Satisfied, Fred? It’s a good thing Iron Man can void his bladder while wearing the armor ‘cuz he probably pissed himself laughing the first time he saw this clown. Then the truth set in. The only thing worse than fighting the Ramrod is having to look at yourself in the mirror afterwords. No wonder Tony took up drinking… 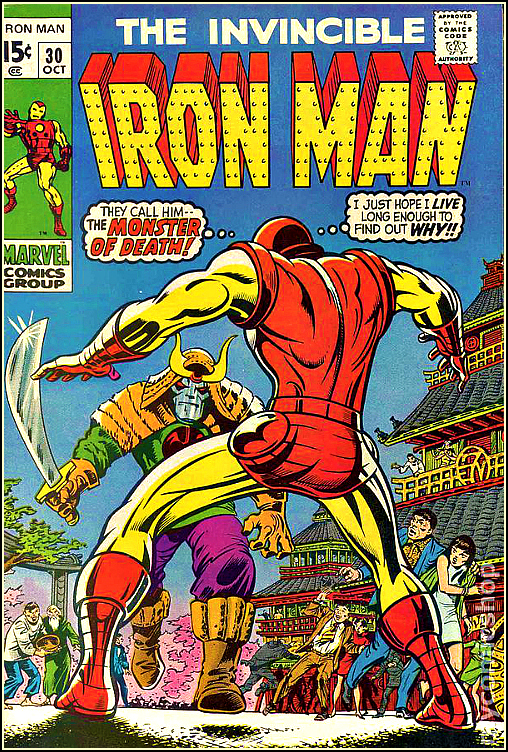 9. THE MONSTER OF DEATH!

Iron Man villains always ended up with lame names — Gargantus, Jack Frost, Endotherm, etc. — but the Monster of Death here puts them all to shame. Okay, in the comic proper he’s referred to as “Monster-Master,” but still. It’s like writer Allyn Brodsky just pulled random words out of a hat until he found a combination that hadn’t already been used. Anyway, dude is neither a monster nor master of anything, so the whole thing is a bit of a misnomer. His remote-controlled Kirby creature (Zoga the Unthinkable!) is pretty rad, though.

“EEOOWWRR!!” indeed. Also, why drag poor Godzilla into this? He’ll be slumming in his own Marvel comic soon enough, no need to get ahead of ourselves. 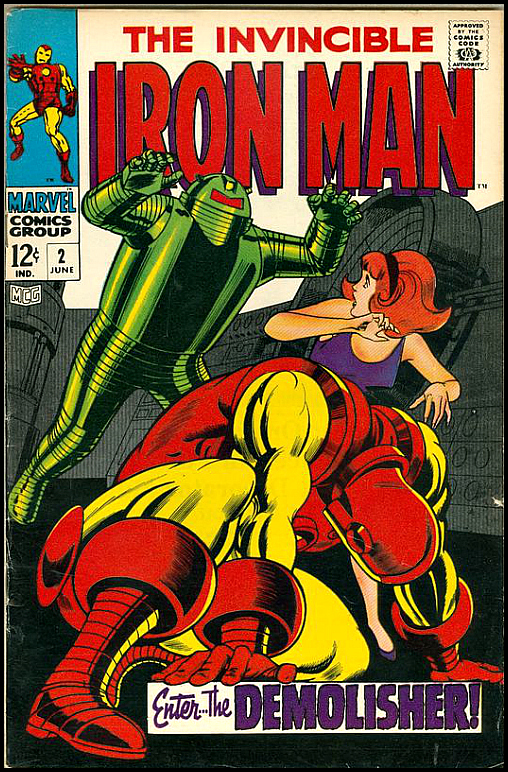 Ever notice that Iron Man is always losing on these covers? And to the lamest villains, too. The Demolisher? Seriously? C’mon, Tony, get up — you’re embarrassing us. Knock this mort back to whatever ’50s-era Atlas comic he escaped from so you can get back to fighting the Mandarin. 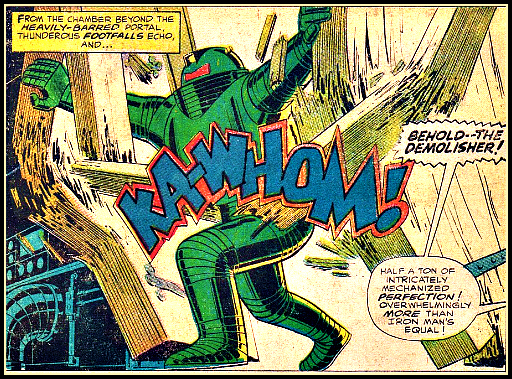 Behold! Are you beholding? Okay then. Half a ton of intricately-mechanized perfection or not, if those were support beams he just demolished, then everybody in that room is boned. I wonder how many super-villains only get as far as turning the robot on before they die horribly. I’d like to read that comic. 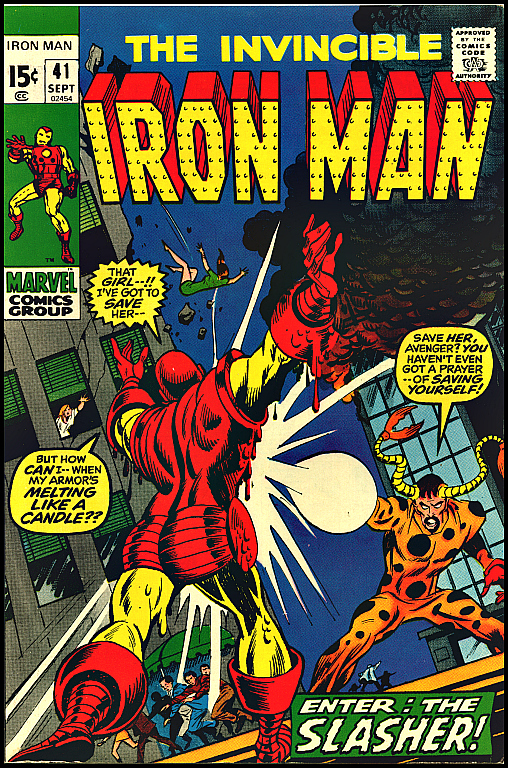 Ever get melted wax on your hand? Yeah, it really burns. I would assume that iron melting down your skin feels considerably worse — time to break out the aloe. Anyway, the Slasher. What can I say? What can anyone say? He wears devil horns tipped with crab-claws. Shouldn’t he be the Pincher? Or would that be silly?

Hmm. It turns out the Pincher’s name is Demitrius. He looked cooler on the cover, huh? Also, he was orange there. Think Marvel will give us a No-Prize? I’d settle for my 15 cents back. 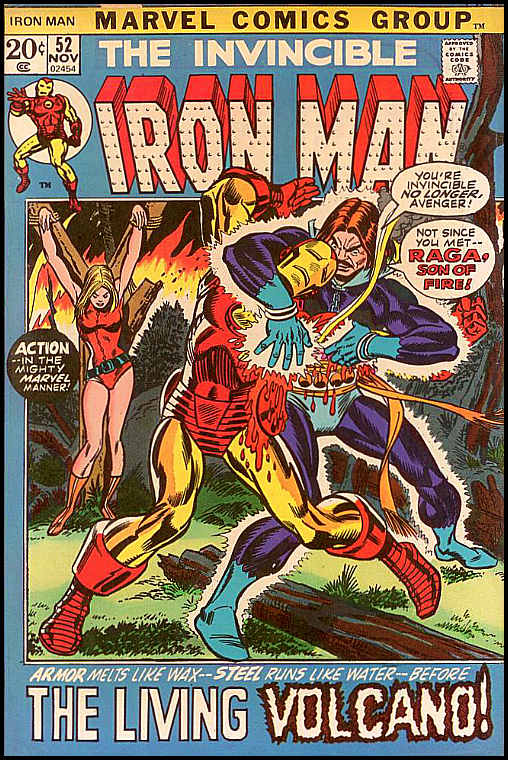 Yeah, no. Sonny Bono here should just wrap it up and go back to the ashram — giving someone an Indian Burn does not qualify you as a super villain. Also, I get that Iron Man is a super-hero and all; he’s gonna take his lumps. But viewing these comics in succession, a strange, almost sado-masochistic pattern begins to emerge. I mean, you’re plugged into a wall outlet, Tony — take a break and leave the Living Volcano to Black Goliath. He could use the work. 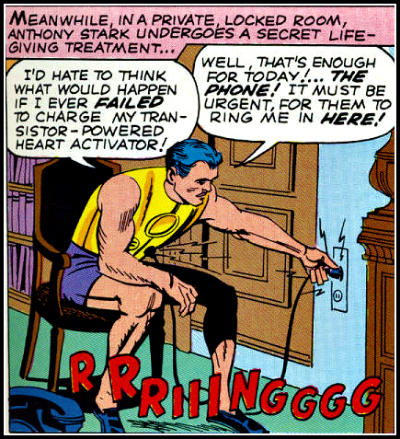 Man, and I thought my electric bill was high. Gives sippin’ on gin and juice a whole new meaning, no? 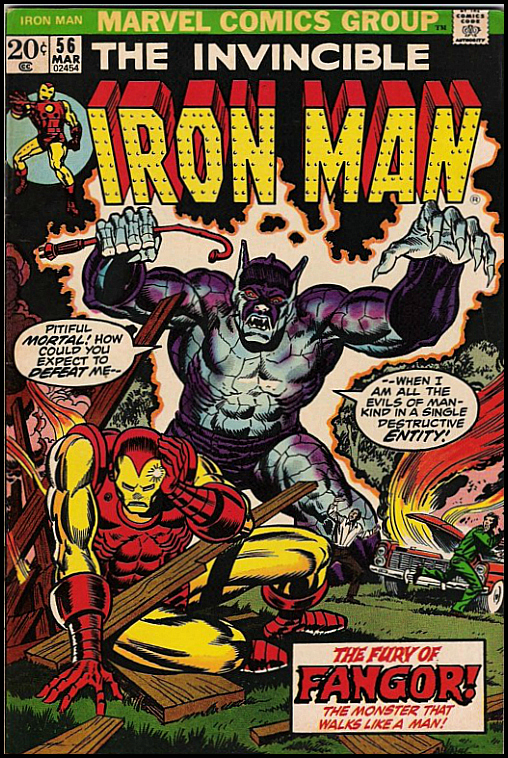 Fangor? Isn’t he a He-Man villain? If he’s not, he should be, because he certainly has no business being in an Iron Man comic. This kind of thing kept Tony from A-lister status for years. Daredevil had more credible rogues — and he fought Stilt-Man! 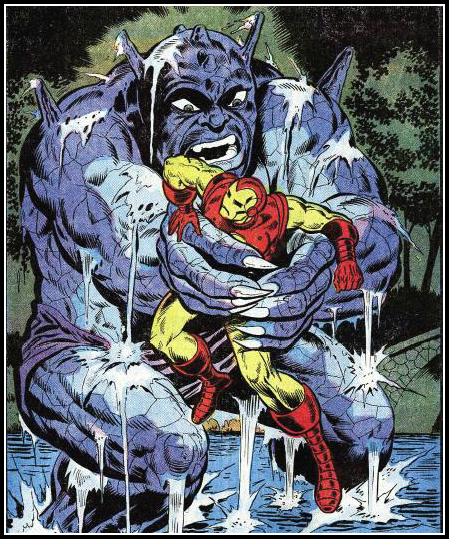 Bad Touch! No means no, Fangor. Now drive me home. 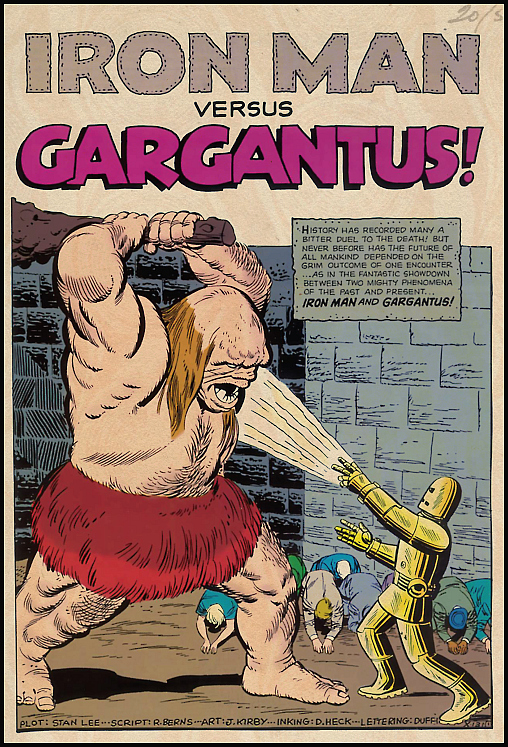 Listen, Gargantus, you’re big. No one would deny that. Bigness is your thing. But you may not want to depend so heavily on just that for your world conquering. For example, back fat — you have a lot of it. I can’t help but think that, as a monster, you’d be more effective at your job if you did a few sit-ups or ate a few less worshipers. 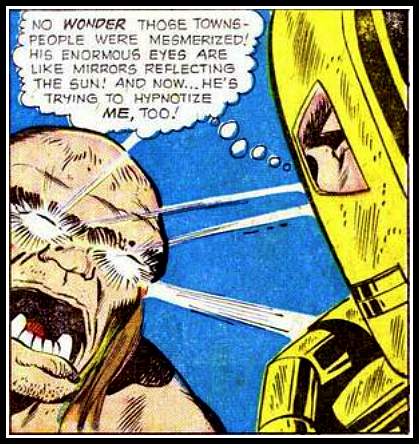 Actually, I’m pretty sure they were mesmerized by his huge rolls of sweaty flesh and pendulous hairy man-teats swaying heavily in the noonday sun, but whatever gets you through the night, Stan. 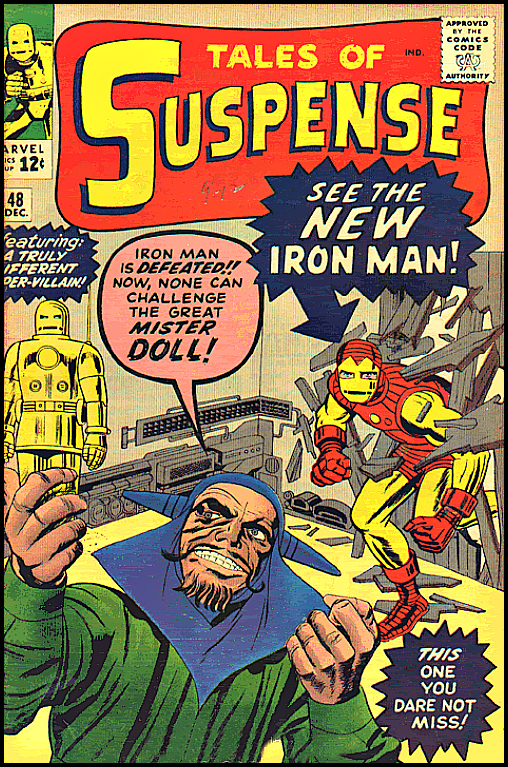 See? They just keep getting worse — it’s like pulling my own teeth. Glad I only decided to do ten. So the cover declares this ass-hat is “…a truly different villain!” How different, you ask? Well, let’s just sat that ain’t clay in his hands…

Say what you will about this guy, but he appears to be the first action figure customizer  There he is, sculpting Iron Man out of what I can only assume is his own waste — and we’ve all been there, right gang? Not a bad likeness, considering. At least he managed to get the paint in the eye-holes. So the Blue Nun here is responsible for Tony upgrading his armor to the familiar red-and-gold suit he wore for the next twenty years, so there’s that. 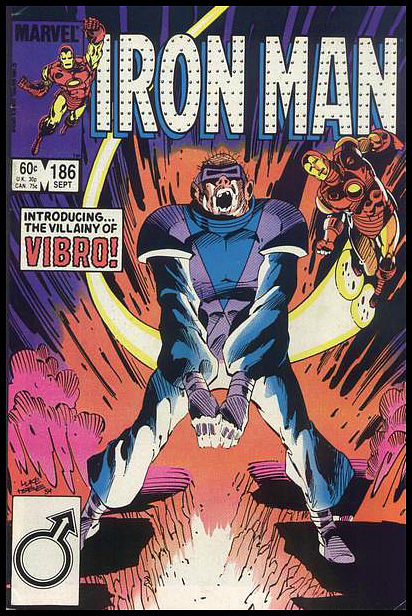 Hey, looks like Chunk from The Goonies is doin’ all right for himself. This particular villain was created so the “new” Iron Man (James Rhodes, subbing for a boozed-up Tony) would have his own unique heavies to fight. If I were Rhodey I’d be pretty pissed at writer Denny O’Neill who maybe could have made more of an effort. This guy looks like an old potato and has a personality to match. Also — VIBRO? 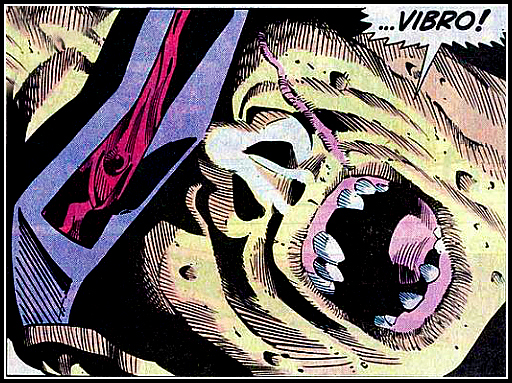 Right, that’s what I said – Vibro. Although if the solo thing doesn’t work out, the Cavity Creeps are always hiring. 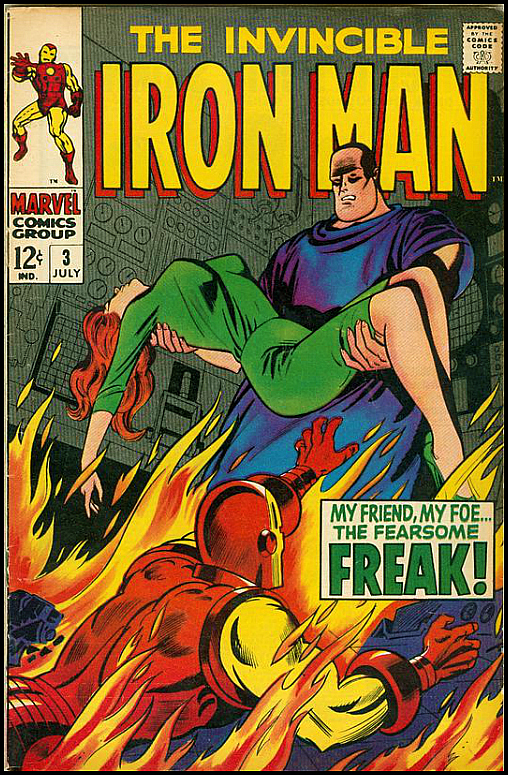 1. HAPPY HOGAN as THE FREAK

Ah, yes, the role Jon Favreau was born to play. I mean, look at him. It’s meant to be. 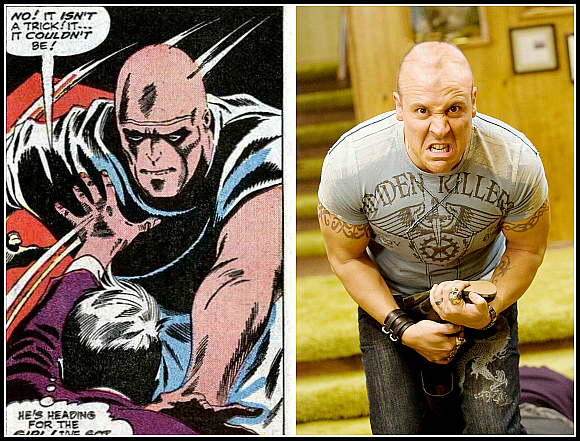 If your not up on your Freak history, let me hep ya: Tony’s erstwhile bodyguard Happy attempts to charge a suit of Iron Man armor for his wounded boss but the machine backfires, exposing him to “the potent power of deadly feedback!” The exposure causes Happy to mutate into overly-muscled bald Freak — but I have no idea how Favreau ended up looking like that.

Jason R Mink IS The Man In The Ant Hill!