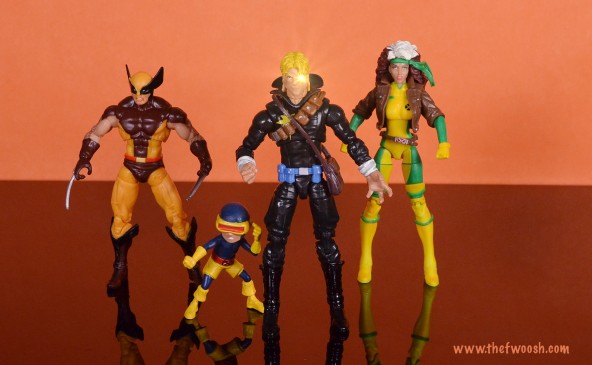 New Marvel Universe team packs are currently hitting all the big-box stores and specialty shops as we speak, and among these new sets is this Uncanny X-Men set. Marvel Universe isn’t a line I normally collect, but I had to have this set because I am a huge fan of Longshot and his co-creator Art Adams, so this set immediately flew to the top of my must-have list. What’s odd about this set is at first glance, it looks as though the set is based on Uncanny X-Men Annual #1o, where the X-Men team up with Longshot for the first time, are turned into “X-Babies,” and battle Mojo for their freedom. And that would seem to be a reasonable assumption, except Cyclops wasn’t in that story and Rogue didn’t wear this particular costume, so this is actually an assemblage of X-Men characters and looks from a few different periods, and not necessarily from the issue where they first met Longshot. It’s still an awesome set, though, so let’s have a look. 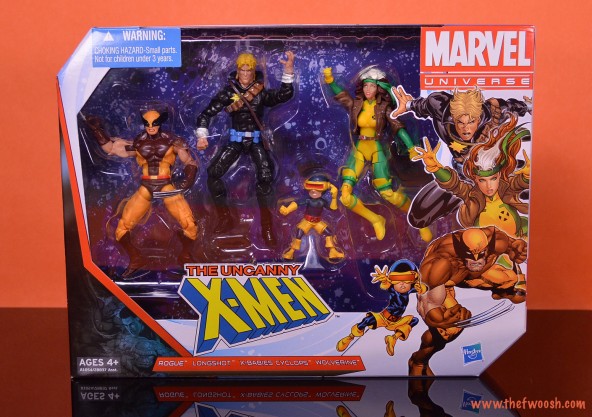 The box art is sharp and Longshot seems to be displayed the most prominently (and so he should be!). As nicely done as the art is, however, I can’t help but feel Art Adams would have been a better choice to illustrate the characters, but that’s probably just my bias showing. Even though many artists have illustrated Longshot over the decades, it’s still Adams whom I associate with the character the most, so it seems like a better fit. It does warm my heart, however, to see Wolverine in his brown costume. This is the one he wore when I was introduced to him way back when, so it’s always going to be the one for which I hold the most affection. 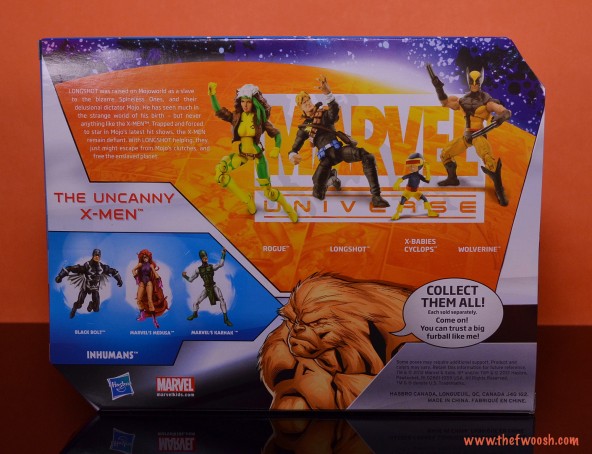 Longshot’s “bio” on the back does suggest that the set could be based on any one of the occasions where the X-Men faced Mojo’s TV-fueled dementia. 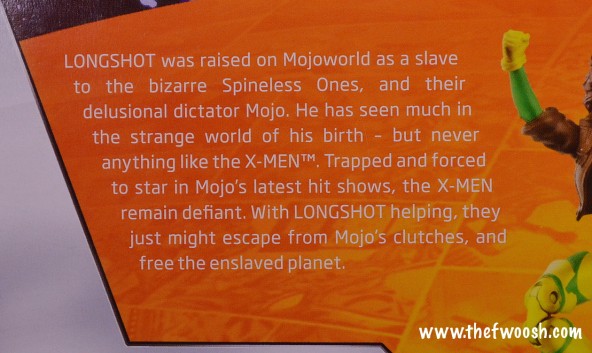 What I love about this set immediately is everyone appears to be in the proper scale with one another: Longshot and Rogue are approximately the same height, Wolvie is a bit shorter, and Cyclops really does look like a little kid, a bit cartoony, but still. They look good together. 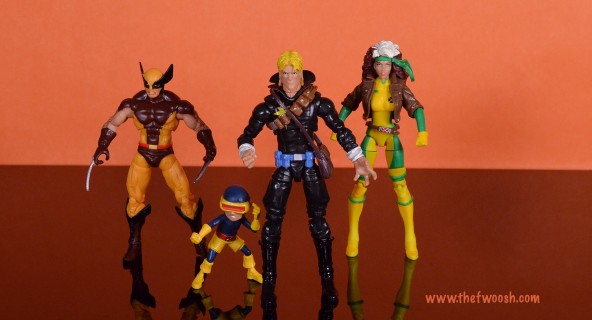 The “star” of the set, at least for me, is, of course, Longshot. They’ve done a good job of recreating his uniform even though the figure looks to rely heavily on the reuse of the Starlord body, so it’s not 100% accurate, but it’s darn close and it looks great. 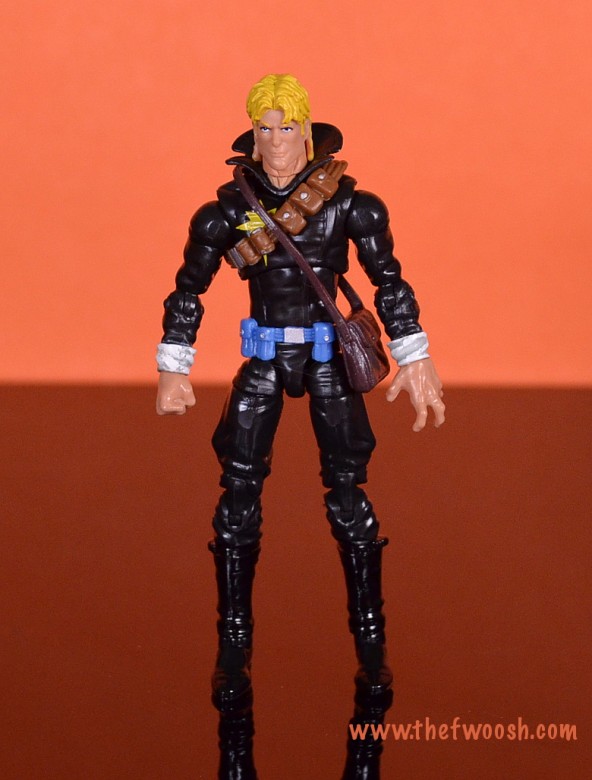 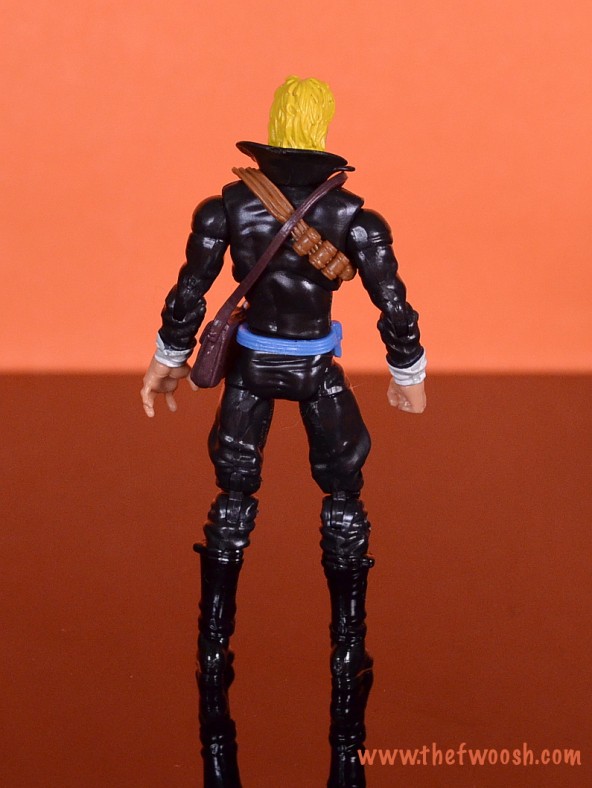 His hands are a new sculpt that feature his signature four fingers, and I appreciate that they chose to give him a head sculpt that isn’t hopelessly goofy, even his “mullet” isn’t an exaggerated mess. He looks downright heroic in the classic sense, and it isn’t often he’s portrayed as such outside of Art Adams’ handling. 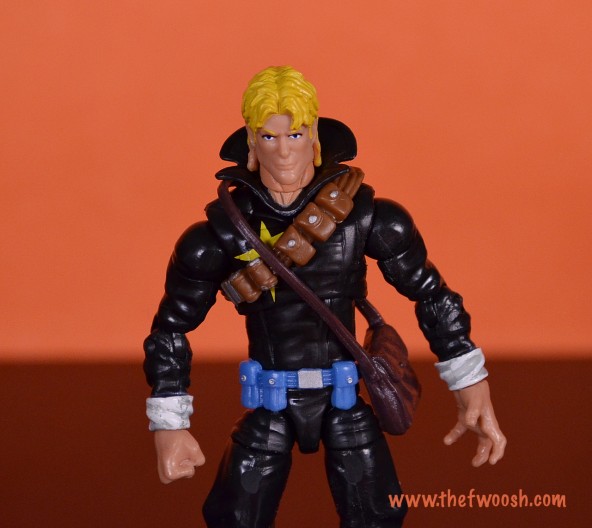 I do wish they had painted his left eye yellow, or had done something to simulate the glow when his “luck factor” kicks in — that curious ability that actually qualifies him as a “mutant” and justifies his place among the X-Men. But I guess that’s what Photoshop is for, right? 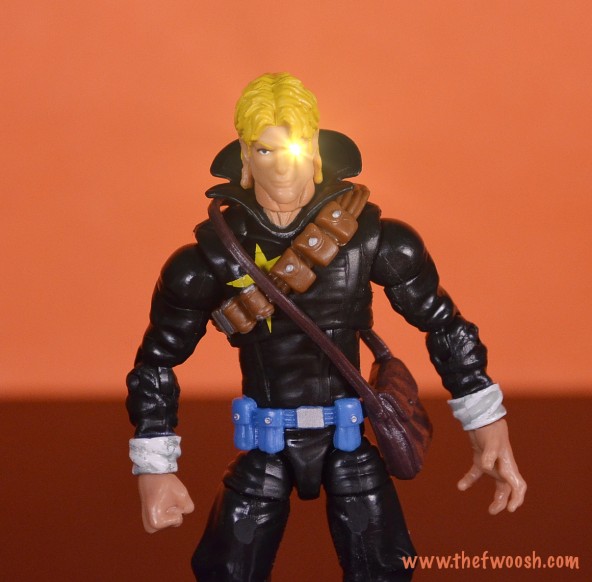 His hair sculpt is a good match to his appearance in the original Longshot mini-series from ’86 where he was designed to look Eurotrash rather than white trash. His hair looks shaggy, not NASCAR, which is exactly right. 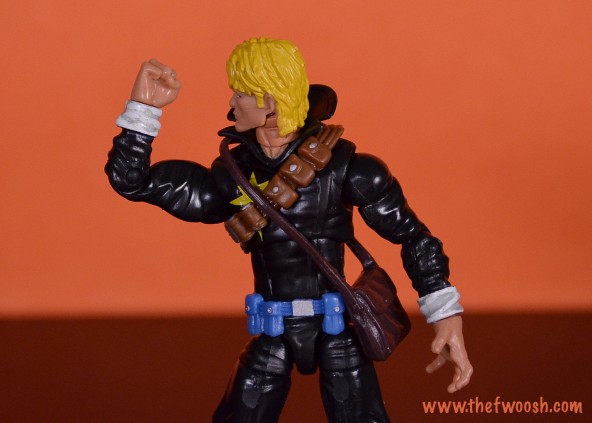 I used to think the Marvel Legends Longshot figure by Toy Biz was a pretty good figure… until I got this one. The Marvel Universe figure really highlights what a gangly mess the ML figure is; the MU figure is just a stronger take on the character every which way, and I’m not even a fan of the scale. Six-inch will always be my preferred scale, but I have to give credit where it’s due, and the Marvel Universe figure is leaps and bounds better than the Marvel Legends figure. 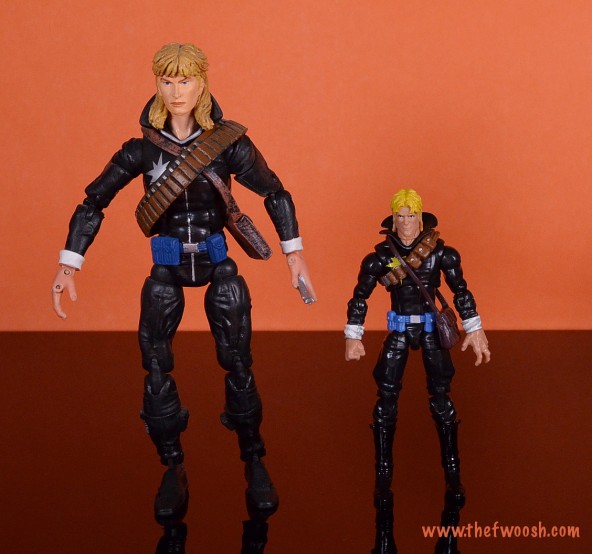 Longshot’s articulation is standard for the Marvel Universe line. He’s highly poseable and there aren’t really any drawbacks to speak of. He’s simply a solid, well-done figure that’s a terrific representation of the character. 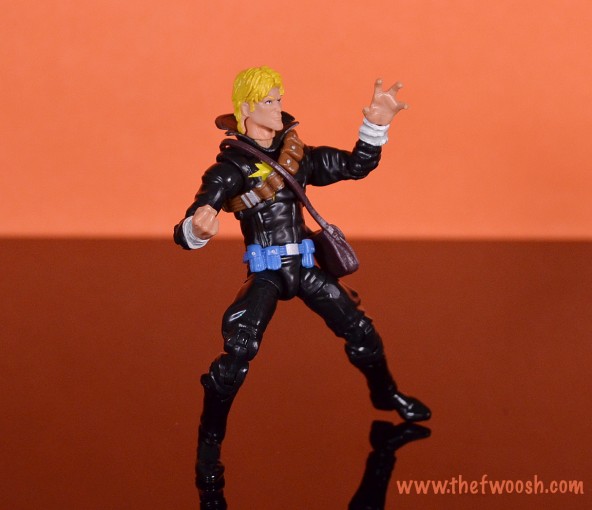 X-Babies Cyclops is a fun little figure, but he’s not much more than an accessory. The sculpt is very faithful to his appearance in the X-Babies miniseries, but he’s really just a PVC pack-in. There’s no articulation, so he’s forever in that “I’m about to blast you with my LASER eyes!” action stance. 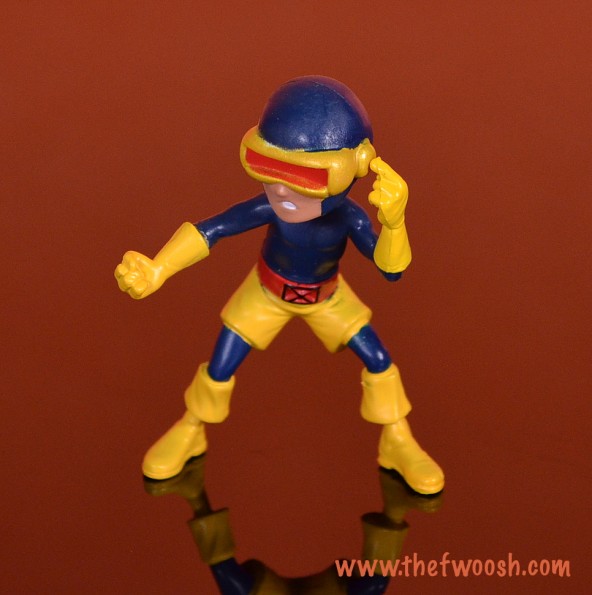 His butt was made in China, not Mojo-World. 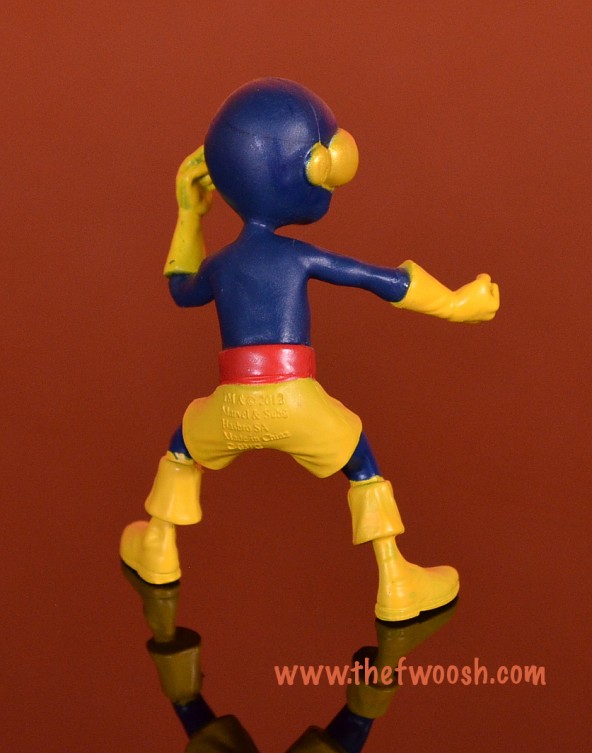 Rogue is another figure many collectors will be interested in. The Marvel Universe line seems to have really figured out what they’re doing with their female figures because she looks great, way better than the Marvel Legends figure released in the same “Jim Lee-era” costume. Her face sculpt is good, her hair looks good, and the rest of the figure definitely has a feminine quality to it. Even the headband works. 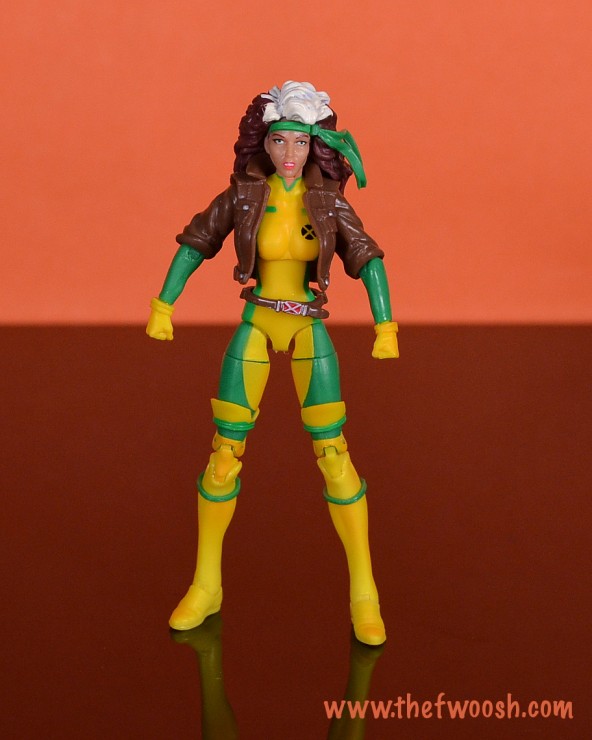 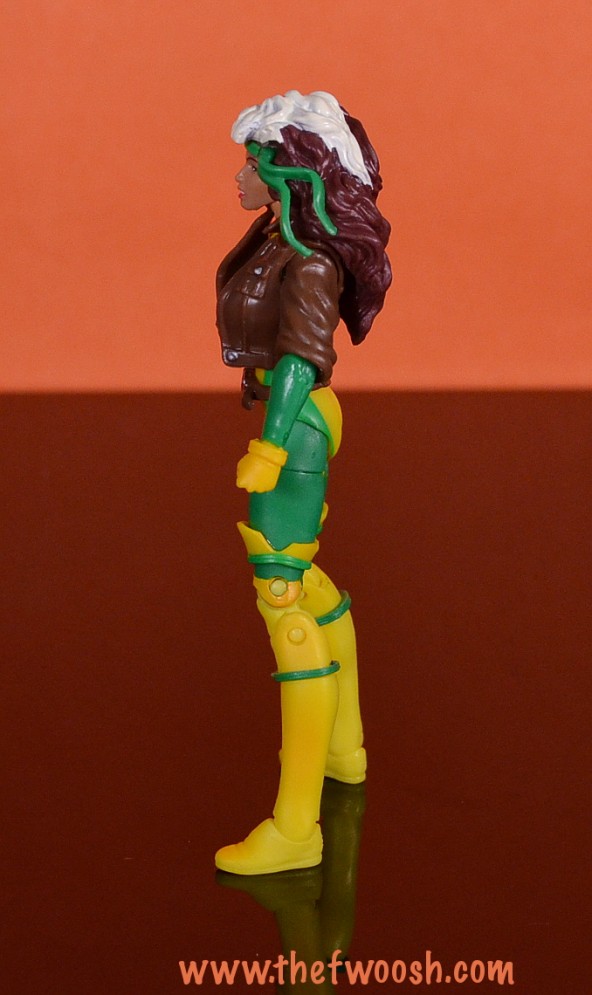 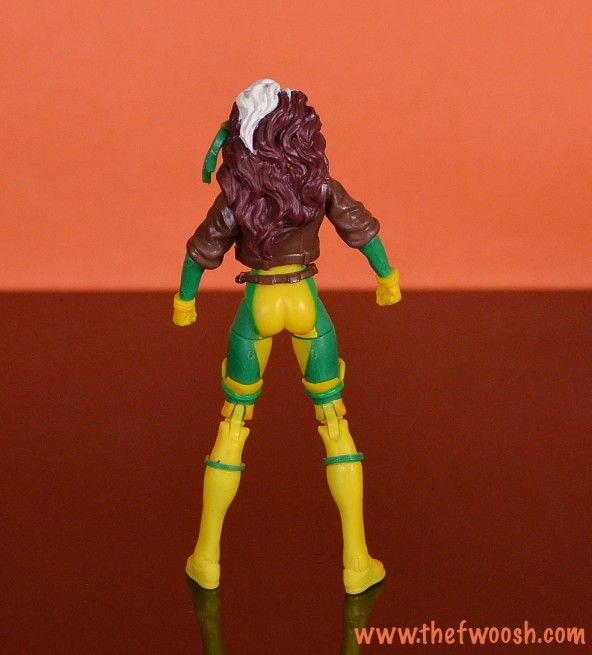 Her jacket restricts her arm movement a little bit, but it’s not bad. She is still a highly poseable figure. I’ve never been much of  fan of Rogue, and this costume is not my favorite, but I can admit that this is a good figure. So if Longshot isn’t the main selling point of this set, it would be fair to say that Rogue is. 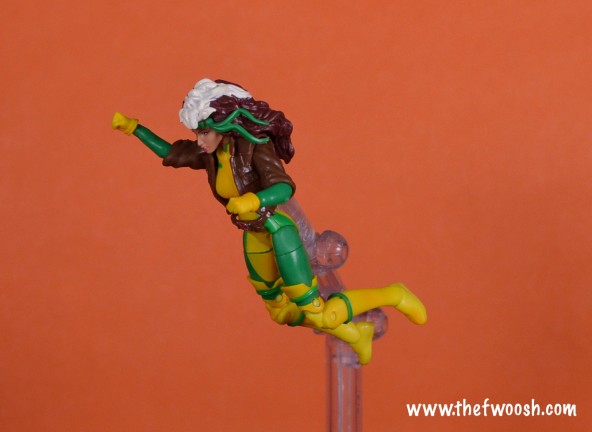 Wolverine here is an old sculpt we first saw with the Wolverine: Origins line. It’s a solid figure that looks good in the brown-suit deco, but it’s nothing new. As good a figure as it may be, it’s never fun to get a figure in a set you basically already have; it feels like padding. 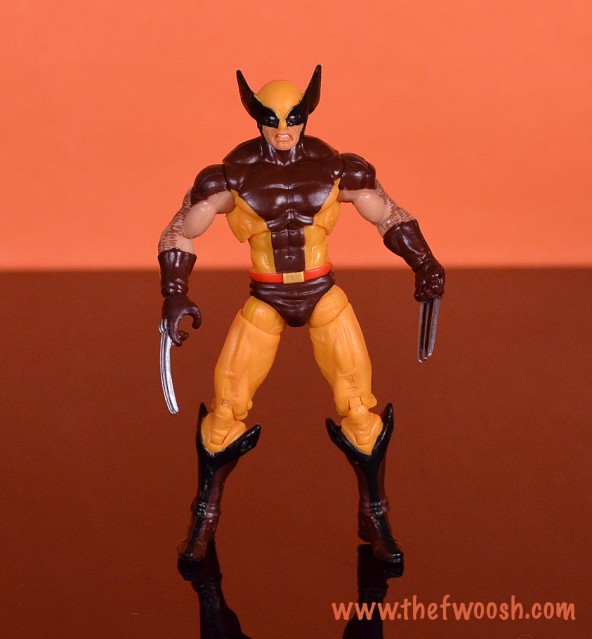 The key thing I love most about this set it that the figures work very well with the Toy Biz Marvel Legends Mojo Build-a-FIgure. Mojo always felt undersized in a Marvel Legends display, and since he’s often depicted as being a big blob of yellow awfulness that dwarfs his foes and minions, he works much better with this set than he ever did with the Marvel Legends figures. 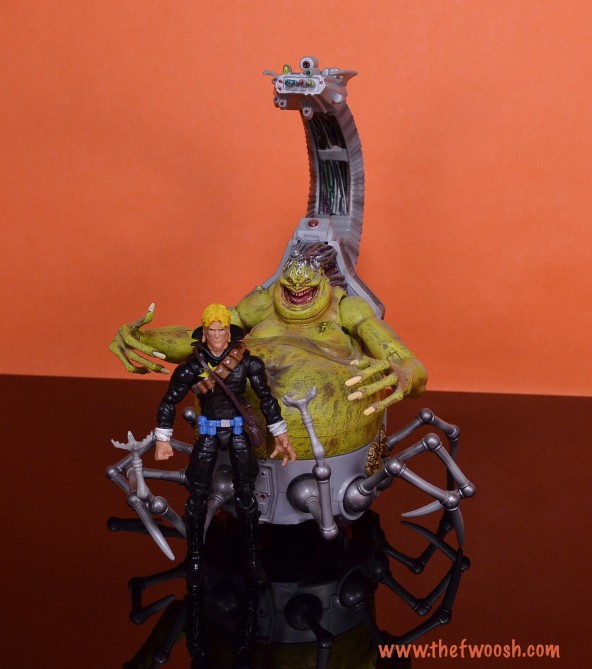 Longshot stands just shy of eye-level with Mojo, so it totally works. 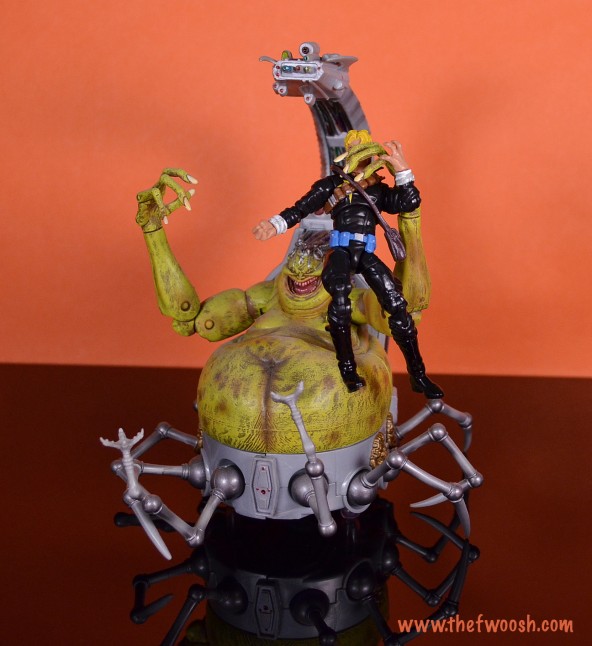 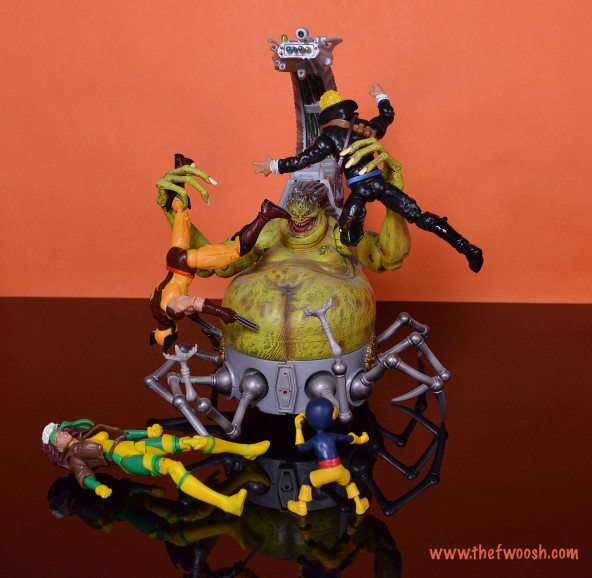 Again, I am not a Marvel Universe collector, but I’m very happy I tracked down this set and it’s got me wondering if I should pick up a few more figures to fill out the X-Men ranks. Be warned, however — this set is proving to be quite difficult to find at retail, which could be due to the set’s popularity, or it could be due to the weird case packs we’ve been seeing. I have yet to find one out in the wild, but I managed to get one from Hasbro’s online store and I’m glad I did. It was definitely worth the trouble to hunt down.