In this new weekly column, THE MAN IN THE ANT HILL makes the case for lame comic characters to be made into action figures. He’s usually unsuccessful, but it sure is funny to watch him try! Take it away TMITAH!

Lorina Dodson takes her cosplay a little too far: 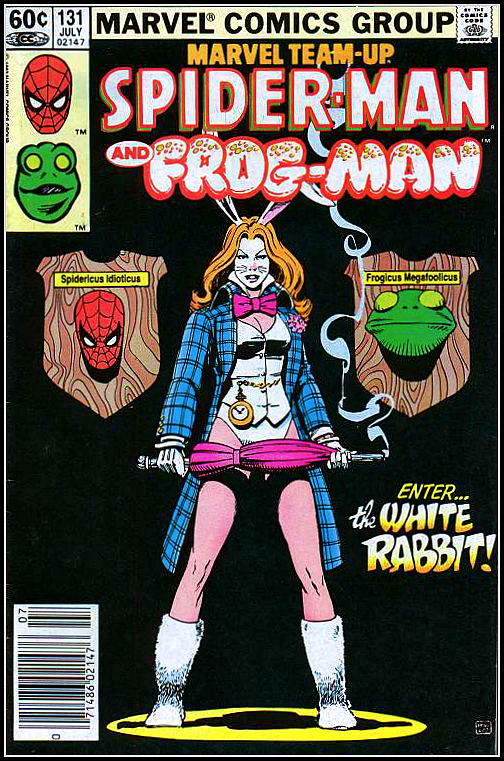 Oh, sure, it looks good on paper. A hot chick dressed in a bunny costume — what could be wrong with that? Well, this particular chick is a little… intense.

First appearing in Marvel Team-Up 131, the White Rabbit is ’80s Marvel at it’s most madcap — and that’s saying something. Back then weird stuff happened all of the time: the Avengers were guests on Late Night with David Letterman, Thor became a space-horse and Spider-Man taught the Beyonder how to pee. Sounds great, right? No? Well, maybe you had to be there. My point is, Marvel’s creators were given the leeway to have a little fun and it shows. 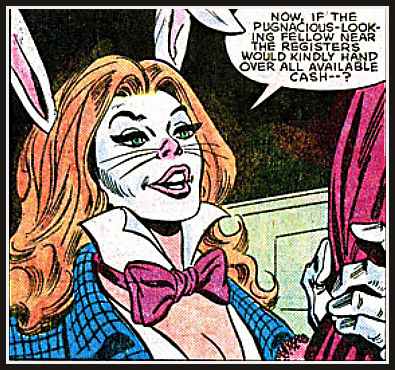 You better do it, man — being shot with a carrot really stings.

It’s a story we’ve heard a thousand times before: spoiled rich girl takes her obsession with the world of Lewis Carroll to the next level by dressing up like a rabbit and robbing hamburger stands. Along the way she encounters fellow Mort Frog-Man and things get real. 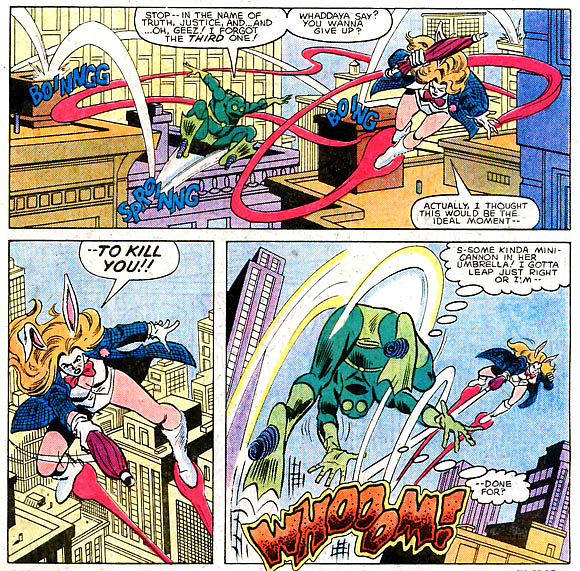 Umbrella cannon? Someone get Cobblepot on the phone, I think we have a lawsuit on our hands. At any rate, since this is a Spider-Man comic, ol’ Webhead shows up and the matter is settled fairly quickly, with Rabbit cooling her tail in a jail cell. She isn’t out of action for long, though, teaming up with the wondrous Walrus just in time to get slapped down by Frog-Man and his elderly father. Clearly, by this point the pattern of mortdom has been established. 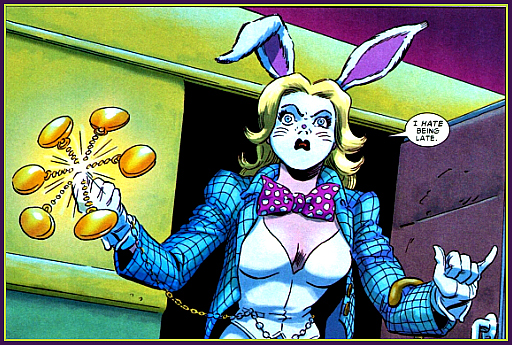 After her humiliating defeat, Rabbit lays low for a while — six years, in fact. She returns to the Marvel Universe no wiser, her next hare-brained scheme easily thwarted by twin Spider-Morts Grizzly and Gibbon. Things get so bad for Rabbit she has to hire actors portray her partners, as no actual super-villains will work with her. No one takes her seriously for some reason… 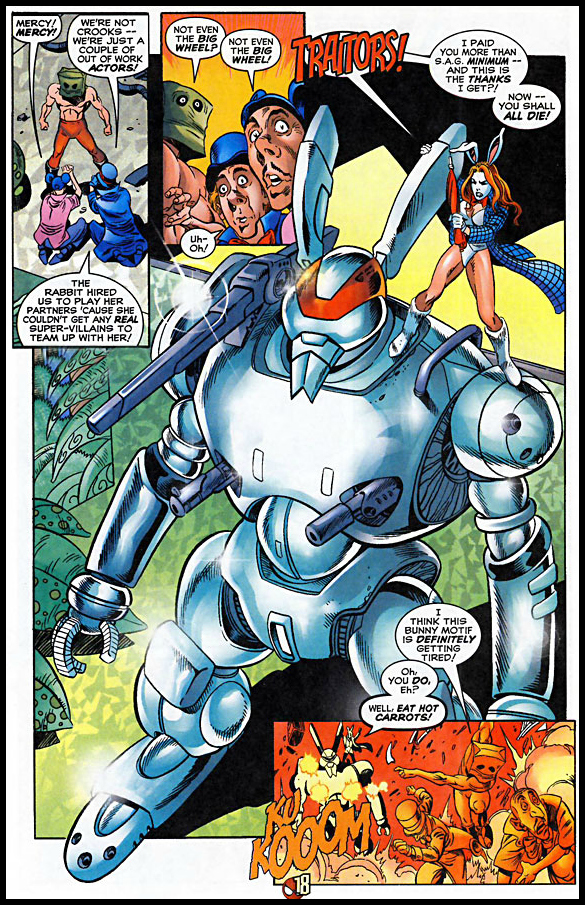 The White Rabbit was created by writer  J.M. DeMatteis and artists Kerry Gammill and Mike Esposito. DeMatteis wrote the seminal White Rabbit tales, infusing the stories with a goofy charm and sense of the absurd. His Rabbit was like a villain from the old Batman TV show: campy, colorful, and completely over the top. Sadly, in recent years White Rabbit has gone from charming to seedy, now little more than a drug dealer on the fringes of the Marvel U. It’s a shame, as new writers clearly have no idea what to do with her. Still, I’m pretty sure White Rabbit will come bouncing back sooner or later… 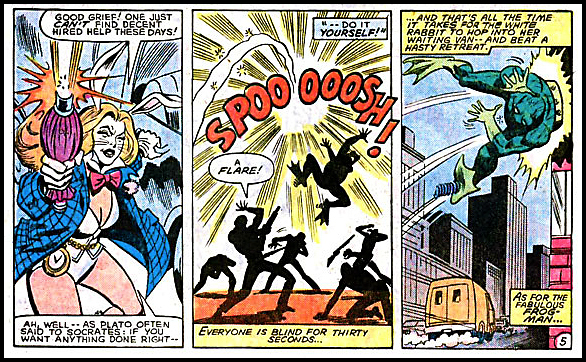 The time has come for Marvel Legends to produce a figure of the White Rabbit. Her modus operandi is tailor-made for toys: with an umbrella that fires razor-tipped carrots, her own  blimp, and a giant RoboBunny, she’s the very definition of “toyetic.” But why tell when I can show? 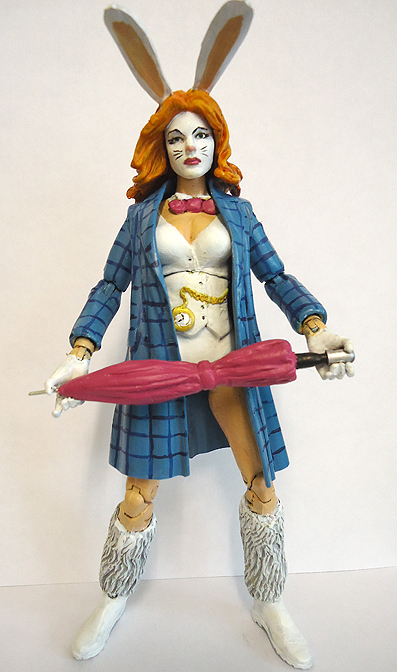 Leaping from the page to the toy-shelf is Fwoosher Rob W’s custom White Rabbit. What a cool-looking action figure! From her bunny nose to her bunny toes, all of the little details are there: the furry boots, her pocketwatch and bow tie — she even comes equipped with one of her deadly umbrellas! 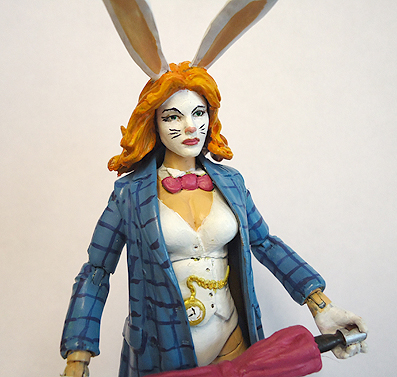 The eye-catching design and playful paint scheme make Rob’s White Rabbit figure really “pop” — although the corset and bustier help!  Character-specific details like her wonky ears and gold chain add to the whimsy. She makes a great-looking toy and I could easily see her appealing to people who don’t ordinarily buy action figures. For example, White Rabbit wouldn’t look out of place on a Alice in Wonderland or fantasy-themed shelf. Then there’s always the chance kids might like her!

Ordinarily this column just focuses on a single character, but when you talk White Rabbit, you can’t forget her partner the wondrous Walrus. 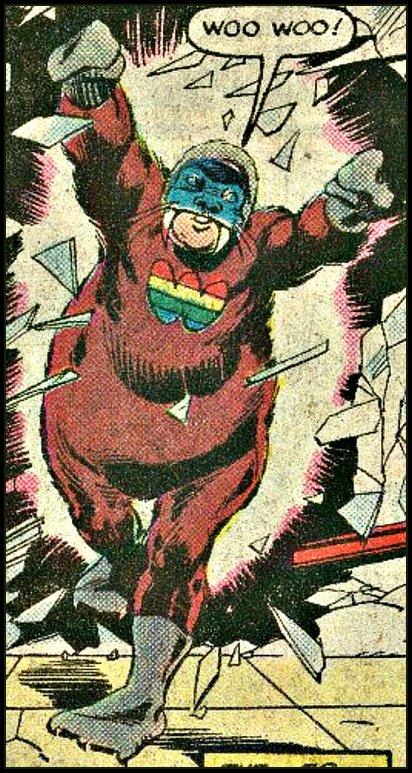 And, ladies — he’s single. Now, I despaired at finding someone who had actually done a Walrus custom, and amazingly, luckily, Rob W already had it covered. 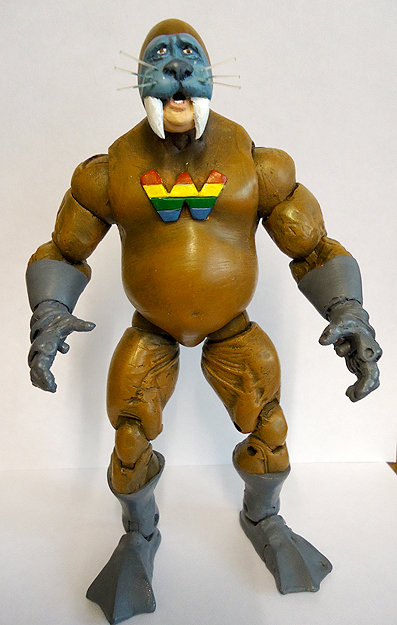 Goo goo gajoob! The Walrus is spot-on — from his whiskers to his webbed feet, this figure is 100% on model. And while even the most optimistic among us would admit Hasbro would never make a figure of this guy, it is fun to dream. Make My Mort two-pack, anyone? 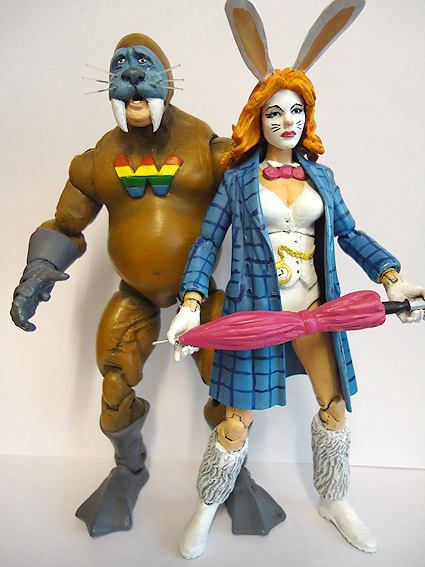 So how about it, Hasbro? MAKE MY MORT!

A Huge thanks to Rob W for allowing me to feature his work in this article. Check out more of Rob W’s nifty customs here — http://thefwoosh.com/forum/viewtopic.php?t=12959