I knew our first DC Mort had to be up to the standard set by previous Marvel entrants Stilt-Man and White Rabbit, and I’m pleased to say Ultra the Multi-Alien easily surpasses them. 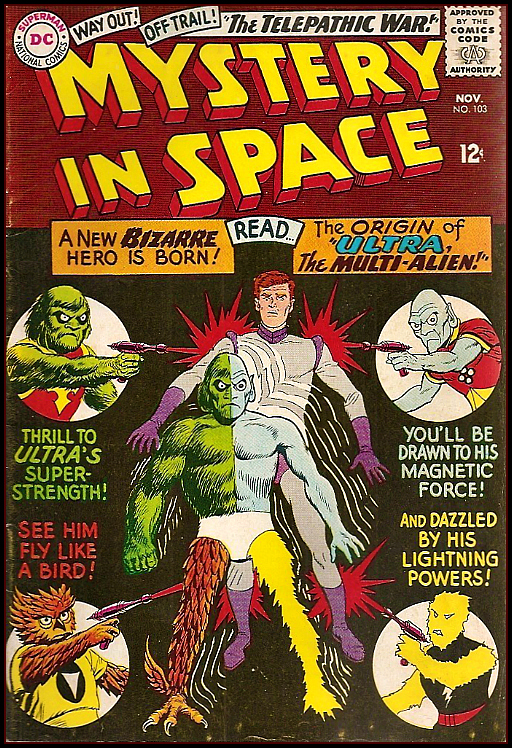 DC Comics of the Silver Age suffer from a reputation for homogeneity and blandness, but the company actually pioneered some pretty innovative concepts back in the day. While Marvel was getting accolades for the realistic portrayal of its heroes and their problems, DC’s characters were rocketing into the illimitable depths of time and space only to return… changed. Take Ace Arn, for example. Once your run-of-the-mill space-jock type, he makes the mistake of crash-landing on a asteroid a gang of alien criminals are using as their hideout. In typical space-jock style, Ace falls back-asswards into an adventure involving a mad scientist, his DNA-splicing ray-gun, and some seriously bad timing. 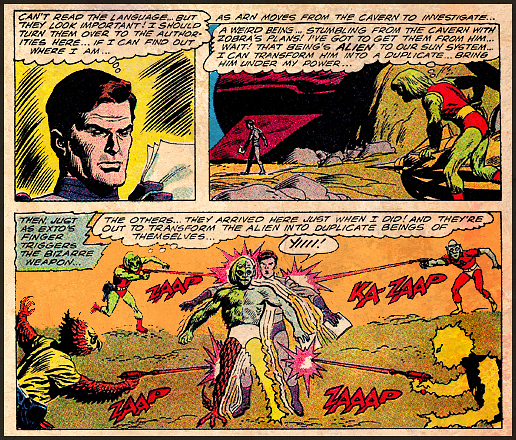 “YIIII!” Having four different sets of alien DNA grafted to you at the same time really stings! Instead of killing Ace, the process transforming him into a “multi-alien.” It’s kind of like how they make multigrain cereal. 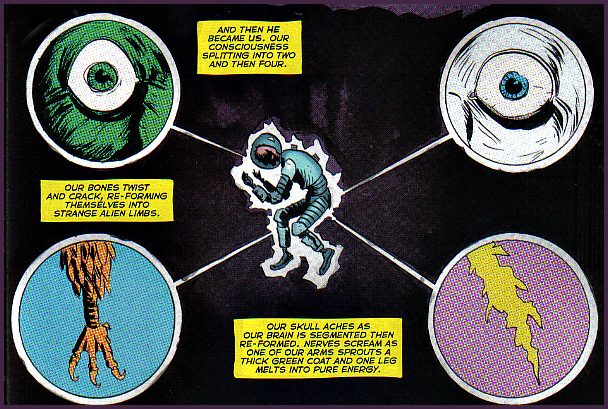 Ace discovers his new form comes with a variety of powers:  incredible strength, magnetic abilities, energy manipulation, and a chicken-foot. Despite being transformed into this unholy abomination, Ace remains a hero at heart, using his newfound powers to “beat off” the criminals. That’s one way of doing it, I suppose… 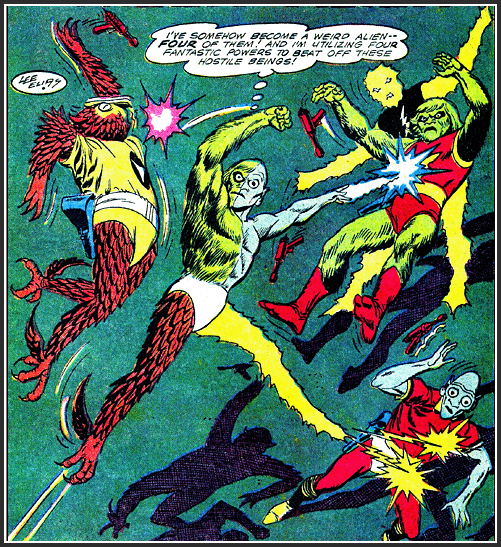 In typical DC fashion, all is resolved in eight pages. Thanks to his convenient “hyper-converter belt” Ace is able to resume his human form and get back to the space-jockey biz. Hey, even a Multi-Alien’s got to pay bills. 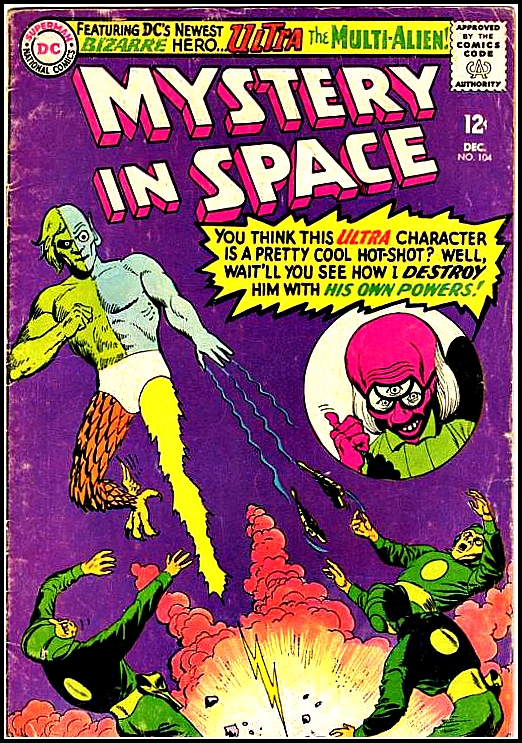 This ain’t a cover, it’s a fever-dream. Can you imagine seeing this on the newsstand? It compels the viewer in a way today’s comics can only self-consciously ape; its lurid colors and ludicrous subject matter’s unsubtle invitation to an avenue of unfettered wonder and imagination… in short, it’s weird. 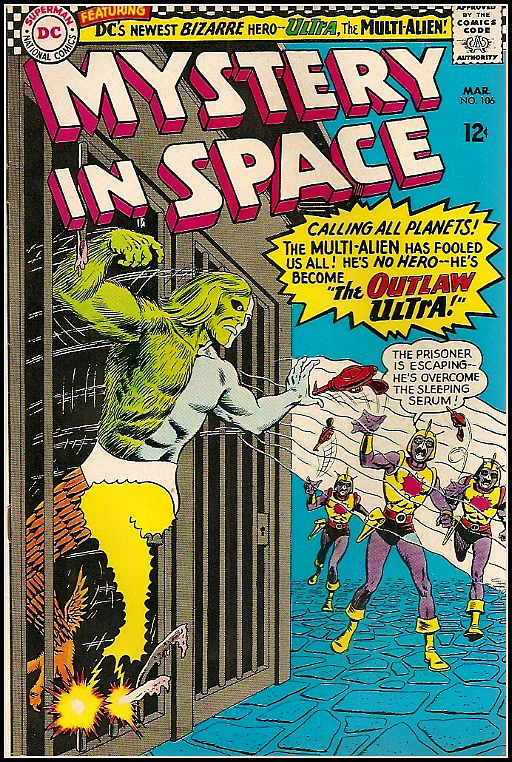 Ultra’s adventures ran for a mere seven issues, but, like the thunder, his echo lingered. The character typifies the madcap creative impulse that flashed through DC titles of the period, his bizarre origin and unapologetic strangeness setting the stage for even wilder titles of the 1970s. Ultra would eventually return to present-day DCU with a handful of cameos, but he’s still waiting for his shot at the big time. 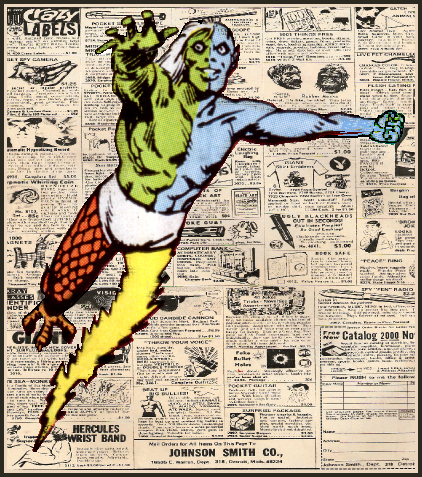 It’s hard to believe that we have Metamorpho in our DC Universe Classics collection but not Ultra the Multi-Alien. The characters are very similar: both are fringe Silver Age hangers-on with a disparate visual dynamic and weird power-set. Face it, a guy who is part chicken and part lightning was born to be an action figure. 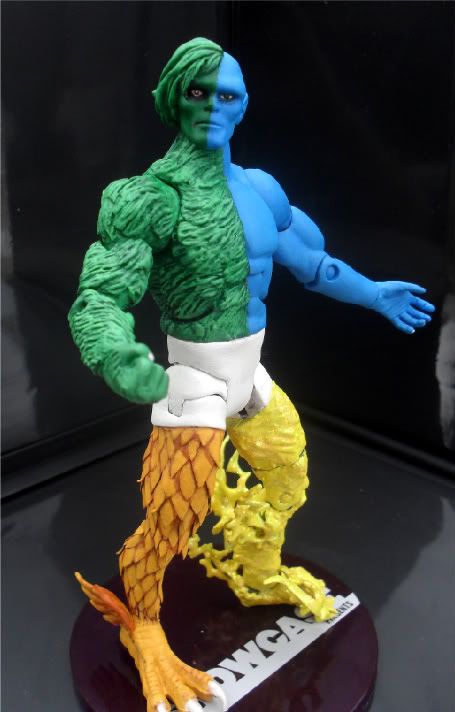 This custom by Fwoosher Rodkeith shows the pure awesomeness that is Ultra the Multi-Alien. Rod really nails it, giving each limb distinction and character — he even uses the often-recycled “Superman Blue” lightning to notable effect. Yes, Ace Ard here would require a bit of new tooling — but if those Injustice turds get it, then surely we can find a few bucks for Ultra! Who wouldn’t want this guy? 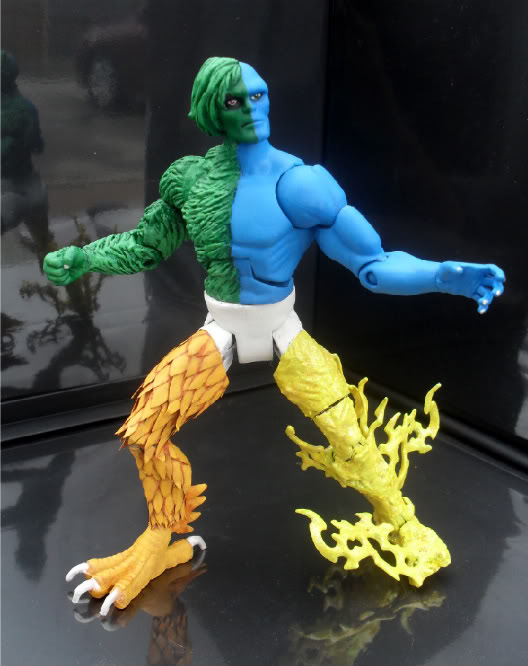 Ultra here is hardly a hard sell. While he may not always make the top-ten lists, once collectors get a look at him they’d be hard-pressed to say no. He’s a classic DC character with an interesting history and unique look. Despite the small initial outlay, a figure like this could only be a boon to a line like DC Club Infinite Earths. He’d make a pretty amazing convention exclusive… (hint hint!) 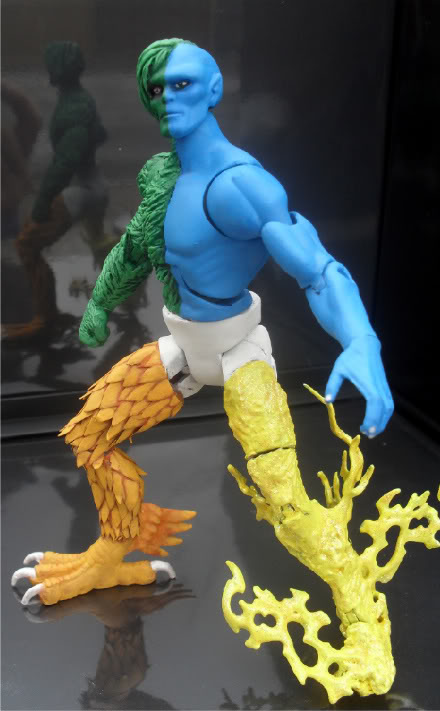 So how about it, Matty? MAKE MY MORT!

Thanks to Rodkeith for providing pics of this week’s Mort! Check out more of Rod’s sweet-ass customs here — http://thefwoosh.com/forum/viewtopic.php?f=9&t=86749