This image hit the internet over the weekend: 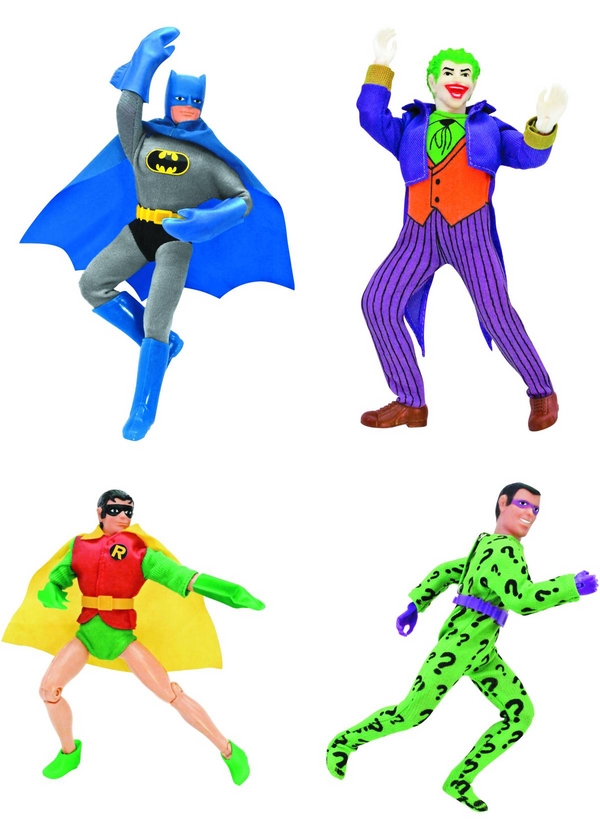 Figures Toy Company presents the first series in their new line of “World’s Greatest Heroes!” featuring classic Batman characters! Each new 8-inch action figure is an exact replica of its original ’70s counterpart, right down to the cloth clothing and retro-styling. With 16 points of articulation, you can pose them in any heroic position! Choose from: Batman, Robin, The Joker, or The Riddler. Each figure comes in a reusable plastic protective case with full-color backing card!

Interesting. Though the press release makes reference to the figures’  “original ’70s counterpart(s),” there is no mention of Mego Corp. anywhere in the description. Also, note the term “World’s Greatest Heroes!” It’s close, but Mego’s wording was World’s Greatest Super Heroes, a term which they owned the copyright to. So what’s the story with these? The prospect of inexpensively replacing my childhood toys is tantalizing, but I’d like to know more about them before I get too excited. The original metal tooling Mego used for the heads is no longer viable, so these are either digital scans or molds. They certainly look good and all the little details seem to be in place. — Riddler even sports a purple version of Batman’s utility belt, just like the 1974 release. And while their arrival is unexpected, these appear to be an exciting new option for collecting DC Comics characters in their classic incarnations at retail. I know I’ll be looking for them.