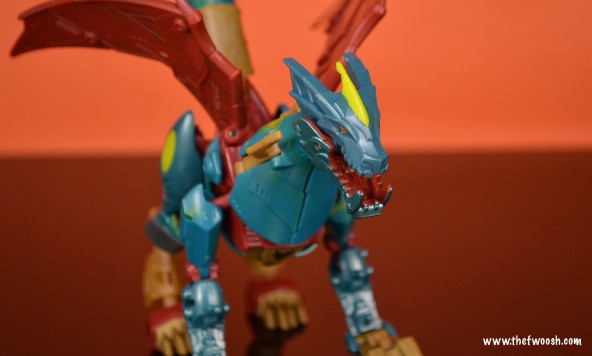 The Beast Hunters animated series hasn’t started yet, so I still have no idea what I’m buying when I hunt (no pun intended) around and find new figures based on characters from the show. Despite that, I can’t resist buying these figures when I find them. Normally, not having some kind of emotional tether to a character is an automatic deal breaker for me, but some of these Beast Hunters figures have been darn cool — especially Rip Claw here. Unlike Lazerback, RipClaw actually looks like a dragon in the traditional sense, so how could I resist her? That’s another thing — RipClaw is a she. The Transformers Prime series has done a good job of having a token female character in each faction featured on the show: the Autobots have Arcee, the Decepticons have Airachnid, and now the Predacons have RipClaw. Unlike the other two, however, there isn’t much about RipClaw that’s as outwardly “female” in design, but what the heck? I’m willing to roll with it. So how does this lady dragon stack up? Let’s find out. 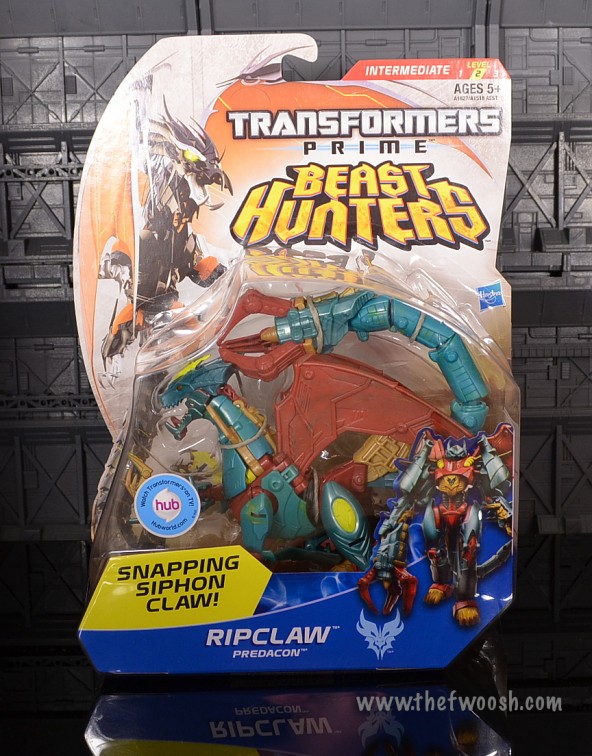 Packaging is pretty standard, but seeing this figure on the pegs made me pretty happy. 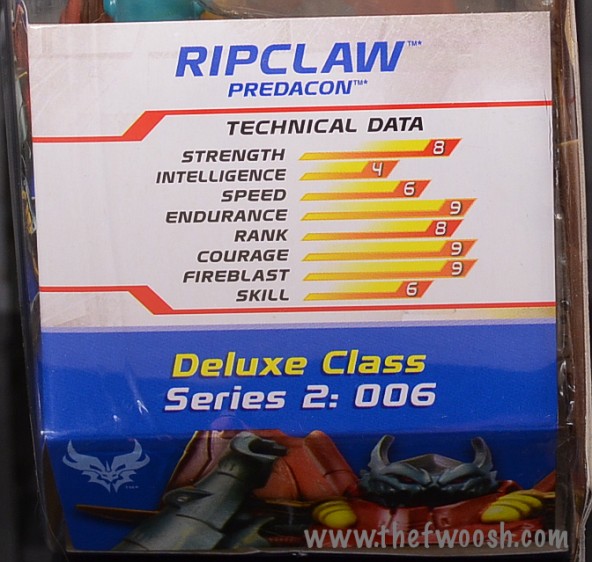 High marks in all areas except for… intelligence. Evidently she’s a big, dumb dragon. I can’t wait to see how the show fleshes her out. I’m dying of curiosity now. 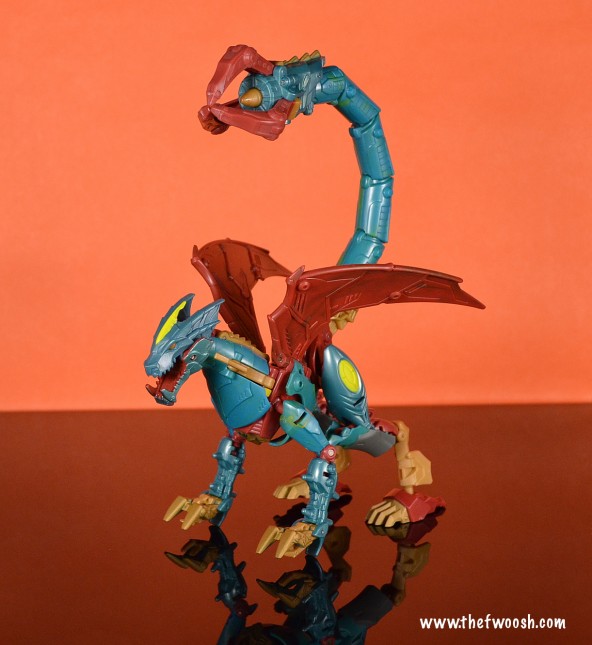 RipClaw’s dragon mode is beautiful. The green/red/orange color combo works to great effect here and it really helps the sculpted detail pop. The sculpt is nice and tight without looking too robotic, so from a distance, or if you squint your eyes, what you see is primarily “dragon,” rather than robot.  And the wings and the large, imposing tail are totally doing it for me. They look great. 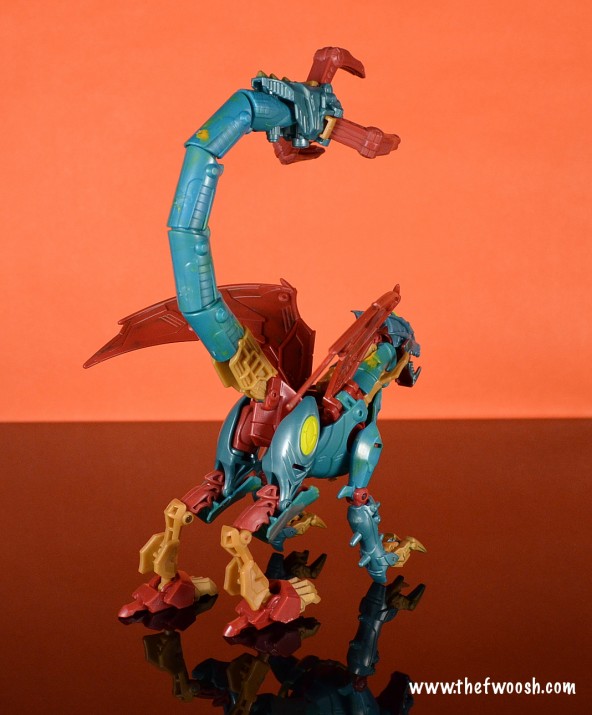 There is very little kibble visible in her dragon mode that would give the transformation away. In dragon mode she looks like a dragon, period, not like a robot crouched over in an effort to look like a fire breather.

Her tail is basically a softer, rubbery material that is sheathed within sections of her tail. This allows for a much more versatile range of motion and it allows her tail to achieve that “arched,” scorpion-like pose she’s packaged sporting. 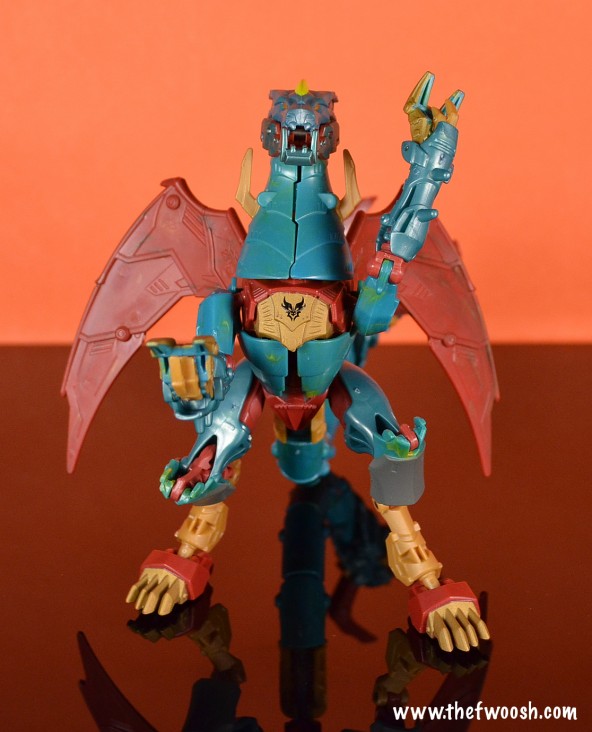 She’s quite poseable in dragon mode, and her tail can easily support her weight when she’s posed. Her jaw is also articulated so as to give her the ability to adequately intimidate any poor Autobot that may dare stand up to her. 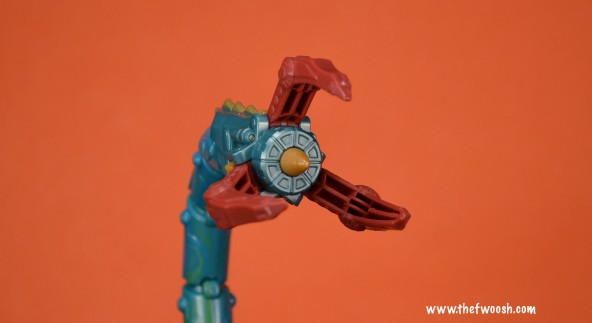 Her main weapon, aside from her claws and jaw, is her tail — the giant claw-like apparatus at the end, specifically. It’s spring-loaded and can close sharply at the touch of a button. It looks as though there’s a missile in the center  that should shoot out, but mine is either stuck or it really isn’t removable. There isn’t an obvious button to press that would activate the launching feature, so maybe it really is just for show. 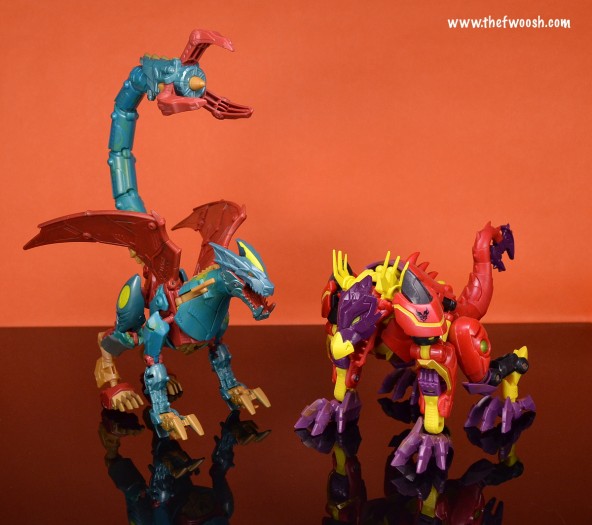 Now, I do like Lazerback, but RipClaw is leaps and bounds better, I think. There’s nothing about RipClaw that makes her look like a “cheap” Transformer toy, not her sculpt, color palette, or transformation. Lazerback is interesting and I think he was an OK choice for Hasbro with which to kick off the Predacons, but RipClaw is simply more of what I wanted from a Transformers Dragon, in terms of both look and transformation. 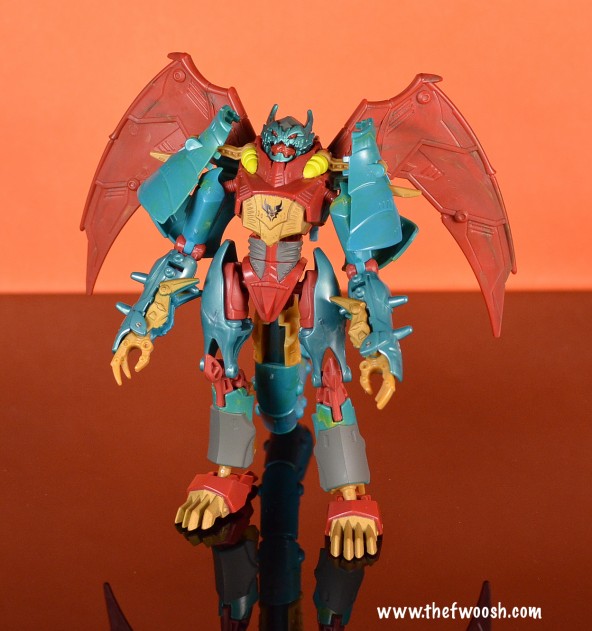 RipClaw’s ‘bot mode isn’t quite as slick as her dragon mode, but it still looks pretty cool. Again, there’s little here that’s outwardly striking me as “feminine,” so, for now, I really am just taking Hasbro at their word that this character is female. The only thing for which I could see an argument made is her hips, but even that isn’t really all that obvious. 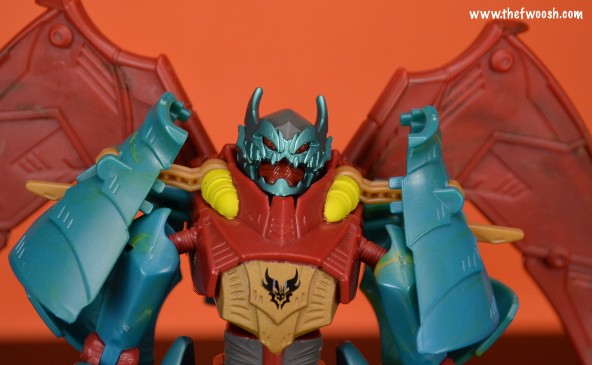 I’ll just come right out and say that I’m in love with her head sculpt. It looks as mean as can be, and it retains a lot of the “dragon” quality of her alt mode. For some reason I can’t quite explain, I’m getting a “Granny Goodness” vibe from the head sculpt. I’m picturing her as a hardcore, domineering, nightmare who should not be trifled with. I’m anxious for the show to premiere to see if I’m even close with that one. 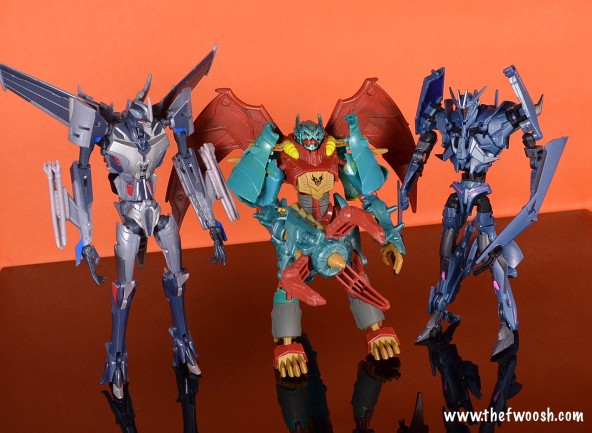 She’s about the average size for a deluxe-class figure. She’s not towering over anyone, but she’s not a runt, either. However, since she does transform into a dragon, I can’t help but think she should be larger, but I can’t really say I’m disappointed with her at all. 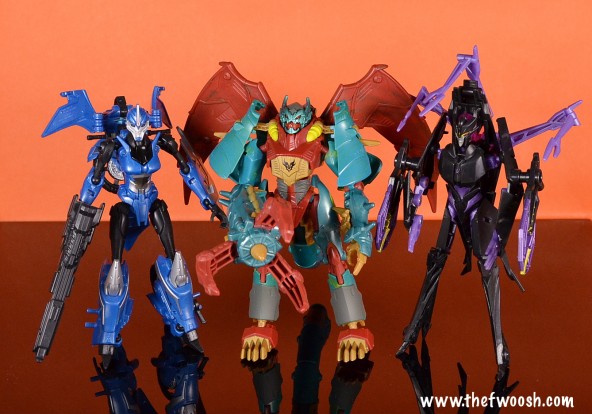 It’s a bit easier to see her feminine qualities when she’s posed with the other female Prime figures, but that may just be due to association. Her height and overall size are right in line with the female warriors, so I guess that’s a start. 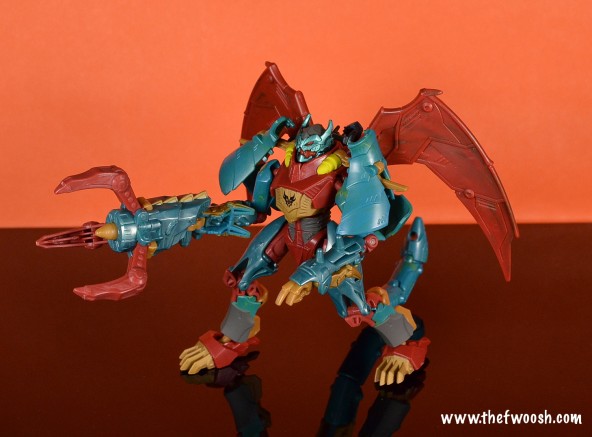 Oh, and if you haven’t noticed from the previous pictures, the weapon at the end of her tail is removable and can be placed in her hand as a traditional weapon. It’s big and heavy, so it’s going to weigh her arm down a bit, but I do prefer it in her hand when she’s in ‘bot mode. It can be kept on her tail and hanging over her head, but it’s not as effective as it is in her dragon mode. 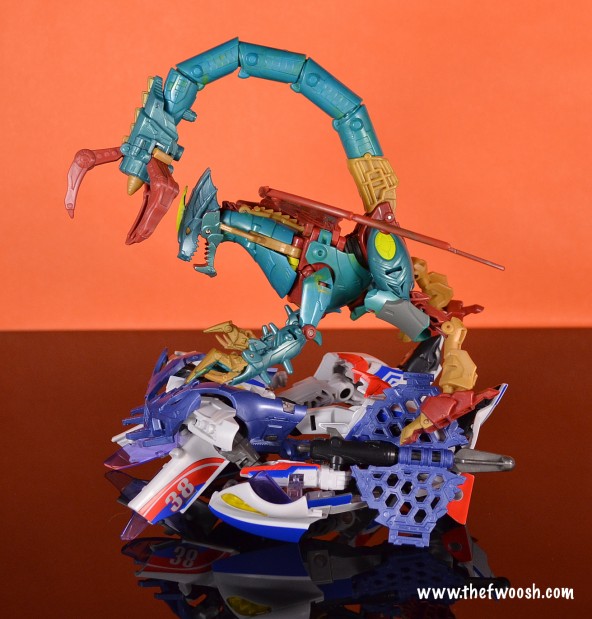 Of all the Beast Hunters figures released so far, Including Smokescreen, RipClaw here is the most satisfying. Both modes are strong and she is definitely unique among Transformers figures. This wave appears to be hitting all retail stores pretty hard at the moment, so she shouldn’t be too hard to find should you want to add her to your collection. Heck, even if Prime and Beast Hunters aren’t really your thing, I still think she’s a cool enough figure on her own merits to justify picking up, so I recommend buying on sight.