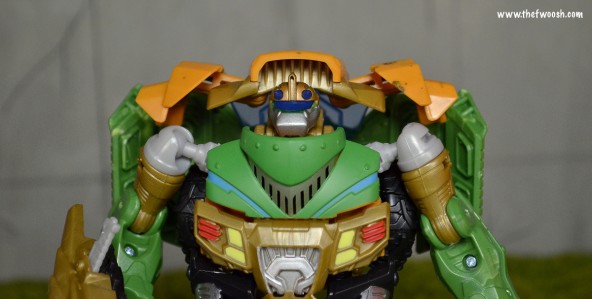 Transformers Prime: Beast Hunters had its premiere in the US this past weekend and it’s awesome to have a Transformers series back on TV. The Beast Hunters figures have been making their way to the pegs of just about every major and online retailer since late December, so now we finally get to see these new characters, and new takes on familiar characters, in action. Bulkhead proved to be a fan favorite in the previous seasons of the show, and we’ve seen a couple different versions of him released as voyagers, including the very popular First Edition figure. Many fans consider that First Edition figure to be the definitive version of the character rendered in plastic, and that’s why I think a lot of people are going to sleep on this new deluxe-class version of the character. My opinion is you can’t have too many Bulkheads, and while this new figure is certainly a departure from what we’re used to, it’s still an awesome figure in it’s own right and a very interesting take on the Autobots’ lovable resident bruiser. 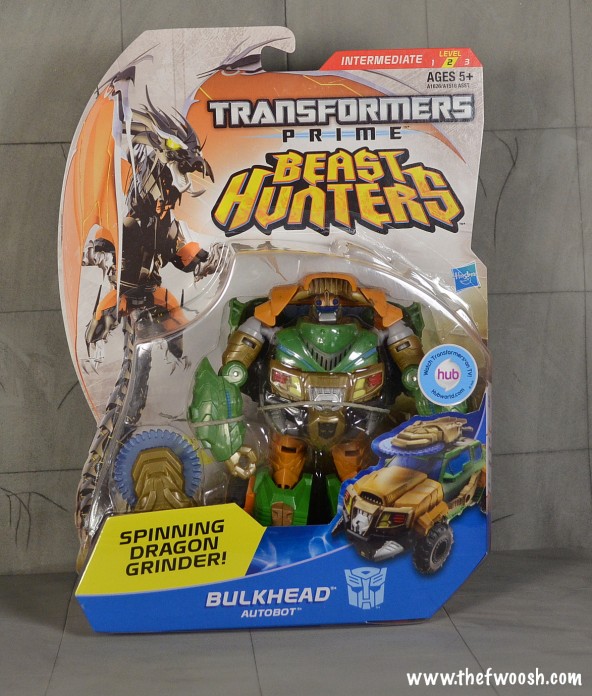 His packaging is pretty standard with no surprises to mention. It can be a little bit jarring, however, to see this figure on the pegs with the word “Bulkhead” attached to it. It just looks so different from what we’re used to. And I think that’s why I’ve been seeing this guy peg-warm in my area. 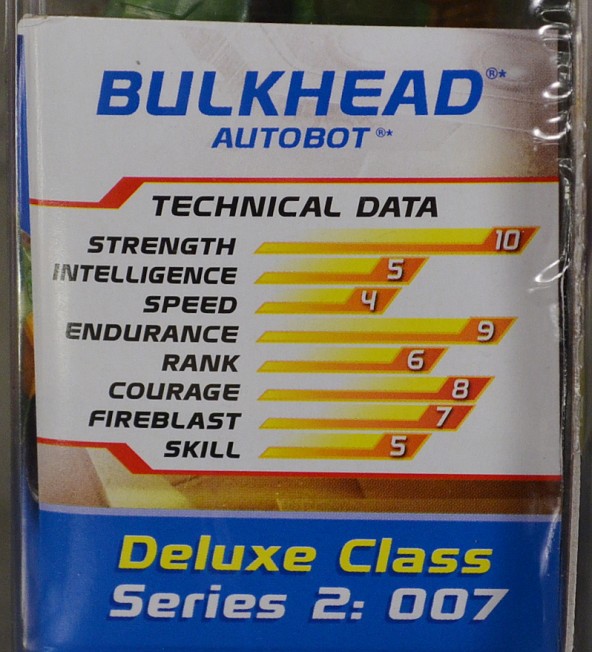 His stats reveal no real surprises either. He’s a strong-as-can-be bruiser and former member of the Wreckers. His stats definitely suggest he’s the type to solve a problem with his fists rather than his brain. Not that he’s a dummy or anything, it’s just that he’s such a powerful ‘bot that his skill set tends to incorporate his physical strength more than his intellect. 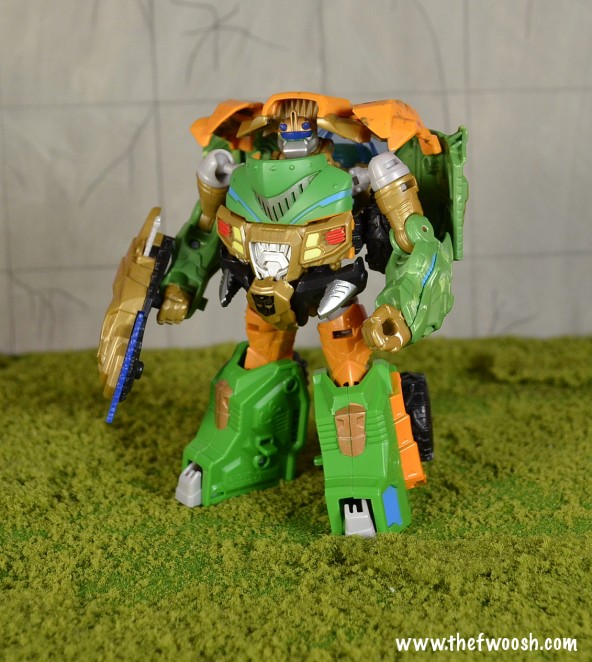 The green and the orange are just doing it for me in a big way. I’m sure that’s due to the fact that I can’t look at this guy and not be reminded of another member of the Wreckers: G1 Roadbuster. Green and orange have always been Roadbuster’s signature color scheme, so for many TF fans, there is no way to look at Bulky and not immediately think “Roadbuster.” His new head sculpt harkens back to the original Bulkhead’s head sculpt just enough to establish a link to the original character, most notably his lower jaw — that is unmistakeably “Bulkhead.” The new visor and horns are cool new touches. 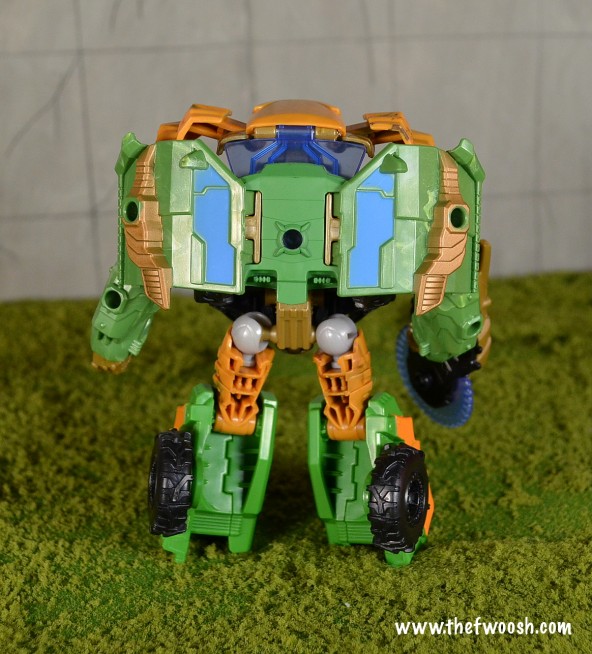 There’s no too much kibble to speak of, which is nice. The worst of it is the set of “wings” the doors of his alt mode form when he’s in ‘bot mode. They don’t get in the way at all, and they actually sort of resemble armor when he’s in ‘bot mode. If he’s going to be fighting dragons, then that extra armor is definitely appropriate. 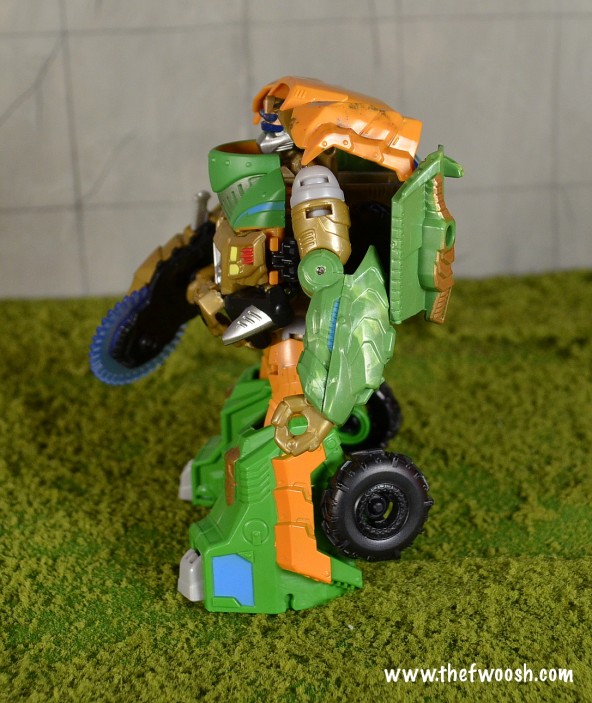 When viewed in profile, you definitely get a sense that this is one seriously armored-up ‘bot. He looks like he can take a beating from whatever the Predacons may dish out and come right back at them, just like we’d expect of Bulkhead. 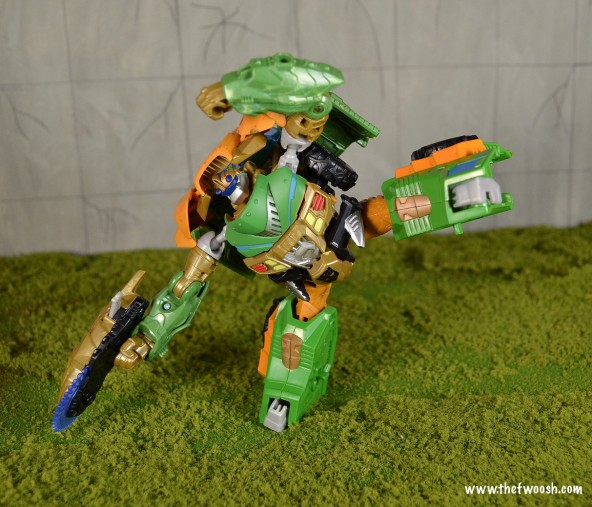 In terms of articulation, he has a satisfying amount that allows him to be posed in a fairly wide variety of action poses. He’s also well-balanced, as you can see in the above “high kick” pic. His articulation makes him among the more fun Beast Hunters to play around with because he also feels the most sturdy when you’re handling him.

The one criticism I have of him as far as articulation goes is I do wish he had a wrist swivel of some kind. If you bend his arm at the elbow so that his hand is then aimed straight up, his fist is locked in a sort of uppercut position. If you want his hands to be in a position so as to hold a pistol or something to that effect, then you have to have his arms positioned with his elbows bending inward toward his body. It’s not perfect and can be a little annoying, but you can work around it. 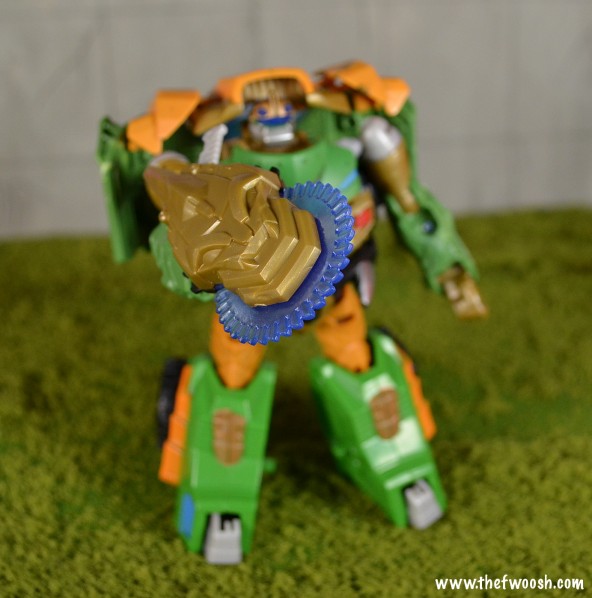 His only weapon, besides his fists, of course, is a saw blade housed in what looks like a dragon’s mouth — how badass is that? It sports an action feature that enables the saw blade to spin. There’s a gray lever that you push in to activate it, and I’m grateful that lever isn’t too obtrusive and obnoxious. It just kind of looks like another handle that he could hold if his arms/hands were capable of such a thing. 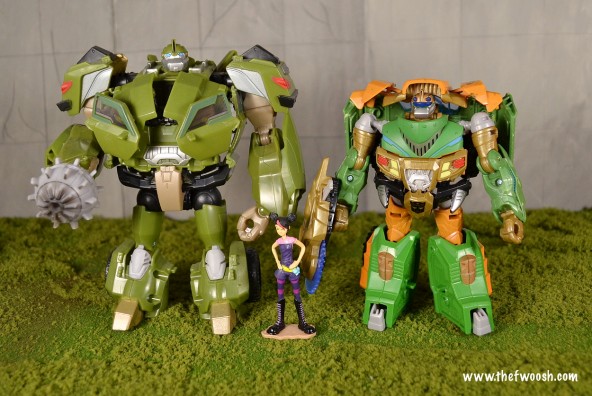 He is smaller than the First Edition Bulkhead, but not terribly so. But looking at them side by side, it’s hard to believe they’re the same character. For this reason, I can easily see many people picking him up just to repurpose him as another character, probably Roadbuster. 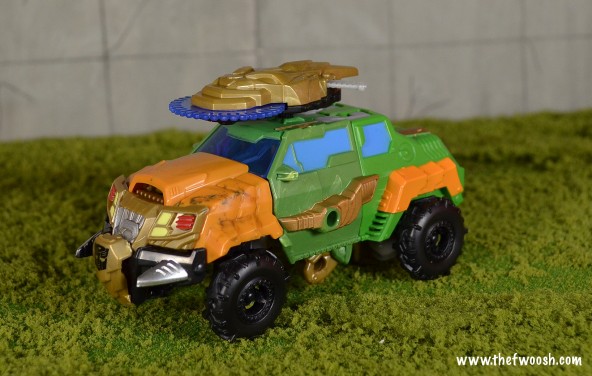 Bulkhead’s alt mode is one tough-looking truck. The spikes on the front and the saw blade that can be attached to his roof make it look intimidating, as intimidating as a green and orange truck can look, that is. It really does look cool, I think — perfect for carving through a Predacon horde. 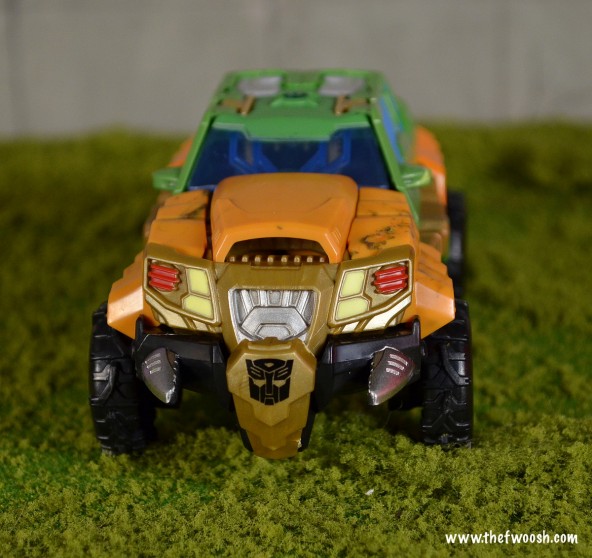 It looks as though Hasbro attempted a bit of weathering on his hood. There are these dark brown swirls that are right in the plastic and it does add a “beaten-up” effect that is somewhat convincing, but… not really. Since it is only visible on the hood, I have to wonder why they bothered. But maybe I’m making an assumption here; maybe this isn’t supposed to be “weathering” at all and is something very different that will be revealed as the season plays out. We’ll have to wait and see. 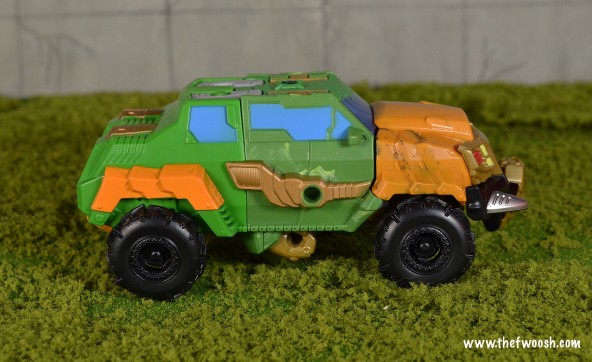 I like the blue windows, mostly, but I wish they all could have looked alike. His windshield is a translucent light blue plastic that looks cool too, but the mix is kind of annoying. For any Transformer alt mode, consistency is key, and these variances do compromise the believability of the ‘alt mode. It would have been nice if the greens matched, too. The rear of the truck is a bright green, while his doors are a darker green with some even lighter green swirls visible throughout. Hopefully those swirls aren’t just a result of cheap plastic and actually have a purpose in the narrative, but I don’t think I’m going to hold my breath. 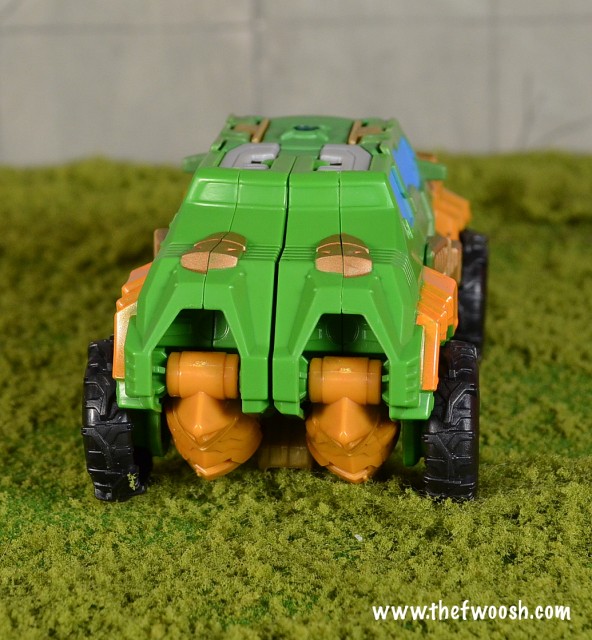 The back of the truck is less convincing, but who displays these with the back facing outward? 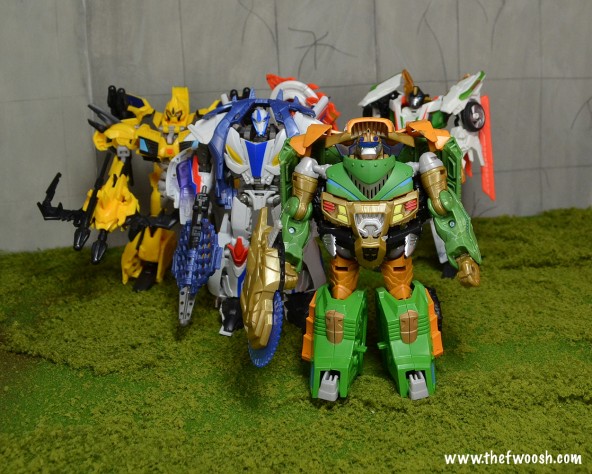 I’m really liking how the Beast Hunters Autobot crew is shaping up. Each one has been worth picking up even if you already own any of the previous versions of these characters. There’s enough here that’s new to justify the purchase and, heck, every one of them is a lot of fun, but I have to say, I think Bulkhead may be my favorite of the bunch, even beating out Smokescreen. I’m just really a fan of the look and the color scheme. 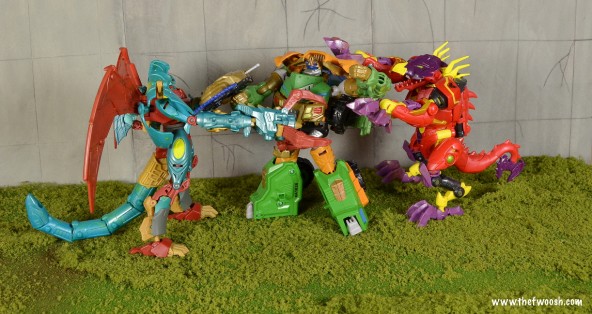 I do recommend this version of Bulkhead to help give a beating to your Predacons, but if you’re only going to want one Bulkhead for your collection, then I can’t recommend him over the First Edition. The First Edition is the definitive Bulkhead, but this Beast Hunters version is a great figure in its own right. If you see him on the pegs, and let’s face it — you probably will since people seem to be skipping him, then pick him up and see what you think. You may find yourself as pleasantly surprised with him as I was.