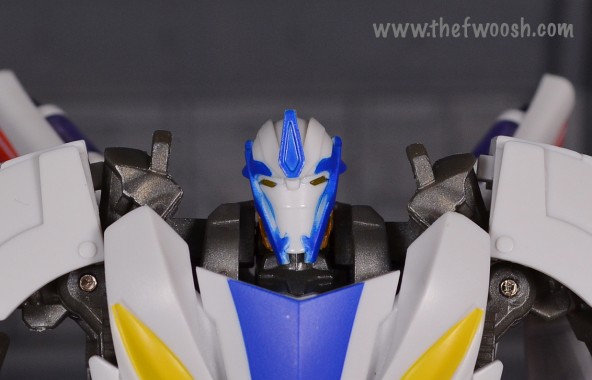 As Transformers Prime season two ended, one of the most glaring vacancies in the toy line was Smokescreen, which seemed very odd because the show seemed to be all about him at times — he’s the “chosen one,” etc. His characterization has shades of Hot Rod, Hot Shot, and Bumblebee (G1), so, to an extent, he seems to fill the role that is traditionally filled by Bumblebee, that being the youthful, exuberant, “kid-friendly” Autobot that adds a much-needed levity to the show. But, kind of like Hot Rod, you like him, but you’re not sure you really want to. Given his role in the show, it seemed crazy that Hasbro hadn’t released him as a figure as the Transformers Prime line came to a close at the end of 2012. Takara seemed to be on the ball with the release of their Smokescreen, a repaint of Knock Out, in the Asian markets, but paying Takara-prices for a figure that wasn’t exactly “screen accurate” didn’t sit right with many fans. To our delight, when Hasbro debuted pics of their Beast Hunters line last year, they showed us they aren’t nuts and gave us a sneak peek at Smokescreen as part of the second wave of the Beast Hunters deluxe figures. Way to keep us in suspense, Hasbro. 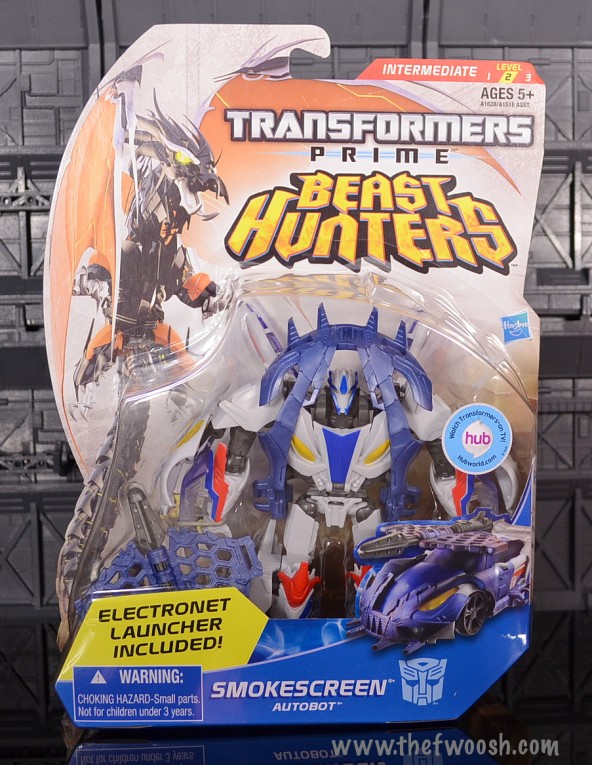 His packaging is the standard Beast Hunters deluxe packaging. Nothing new or unusual here. 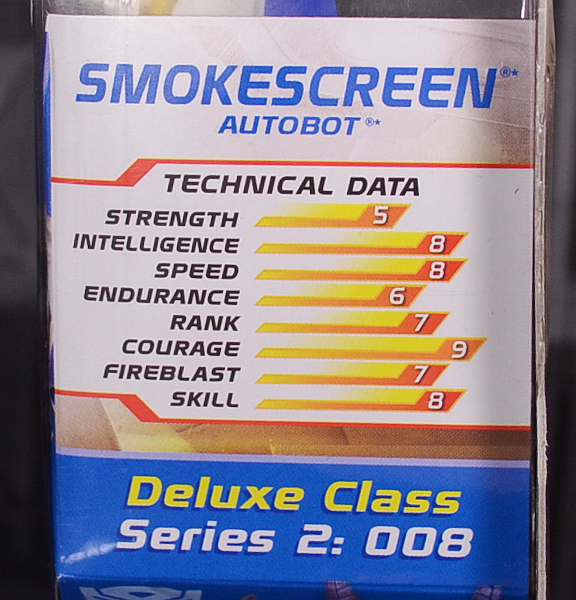 His stats reveal a bit about his personality. He has courage to spare, but not necessarily the experience to back it up. He’s all heart, and that often gets him into trouble. As he matures, however, he’s sure to turn into one hell of an Autobot warrior. 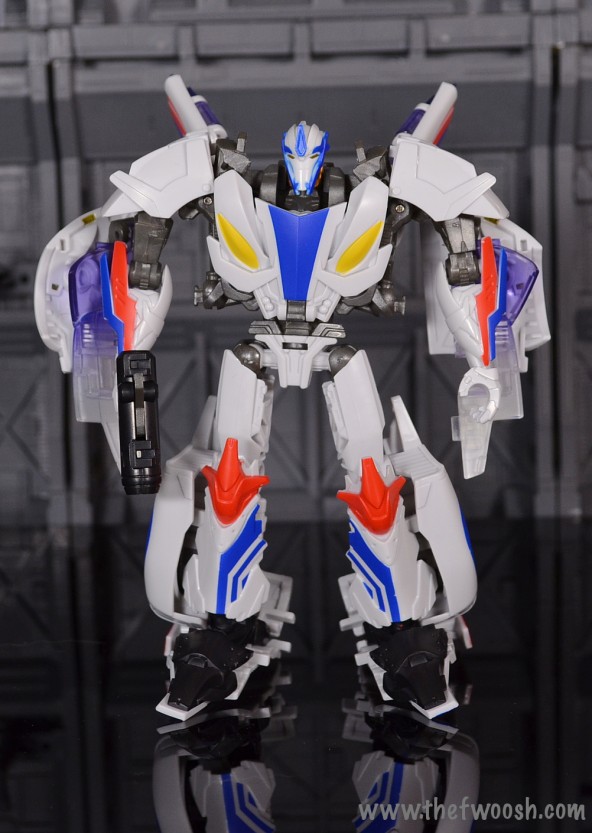 When images first appeared, the general reaction was “YES! SMOKESCREEN! But… what’s all that blue junk all over him?” That “blue junk” is what essentially qualifies him as a Beast Hunters figure. It’s the “Mad Max” element that all the Autobots are now saddled with, evidently. Fortunately, the Mad Max armor is removable, so you have the option to display him as he appeared in the second season of the show if you prefer. 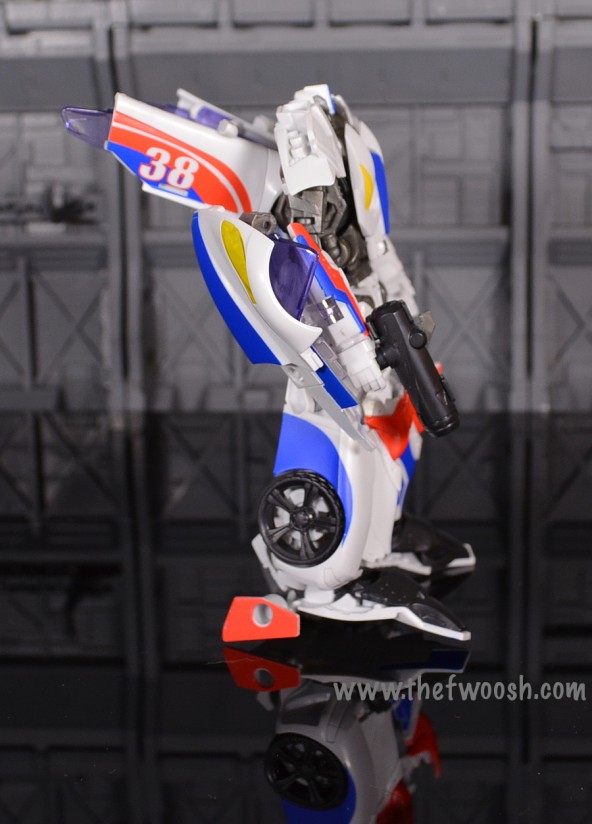 The sculpt/mold is really nice, but, as we’re seeing with many of Hasbro’s Transformers these days, the paint apps are sparse. He’s a white bot with just the primary colors (and some black on his feet) adding the necessary details. Could anything be more basic? It works well enough, however, because he looks perfectly clean and sharp. 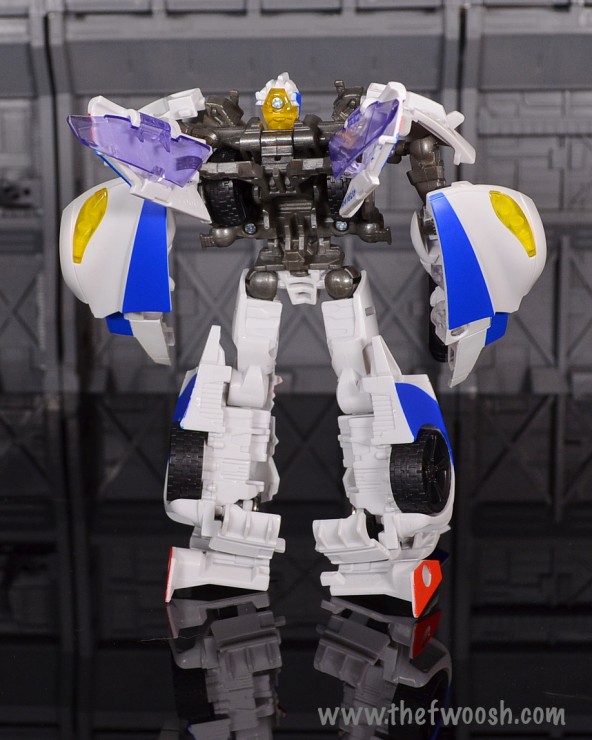 For the most part, he isn’t plagued by the hollow affliction many modern Transformers are. He is very light, however, but his bot mode looks good despite that. He does have a bit of kibble on his arms where the part of his alt mode extends beyond his hands. It’s not terrible, but it’s just enough to be annoying. 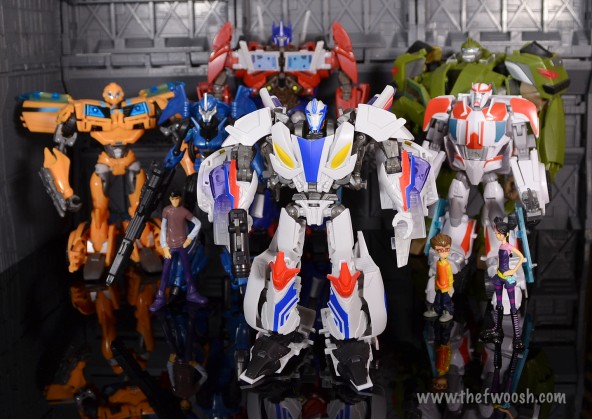 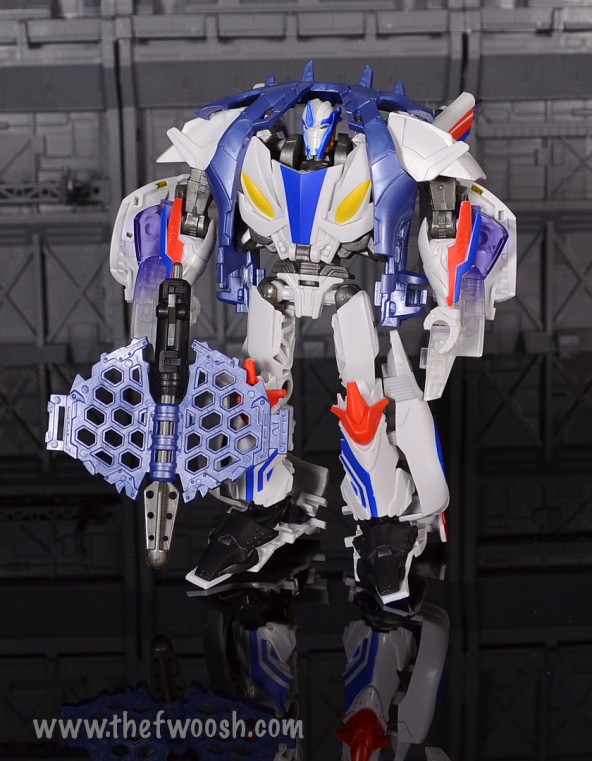 His Beast Hunter gear is actually pretty cool when he’s wearing it properly. It’s made of a soft, rubbery plastic that can be bent back over his head and locked in place, making for a much less obnoxious armor piece than what we originally saw. Truth be told, I think I like him better with the armor than without, which is a total shock to me since I fully expected to toss the armor into a box the instant I opened the package. It actually looks cool! And the slightly metallic blue adds some more depth to the figure’s primary-color palette.  I’m thankful that, at least so far, Hasbro has restricted their attempt at a weathered look to just their Beast Hunters Wheeljack. While I do think Smokescreen could do with some more detailing, I’m happy to not see any gray smudges all over him. 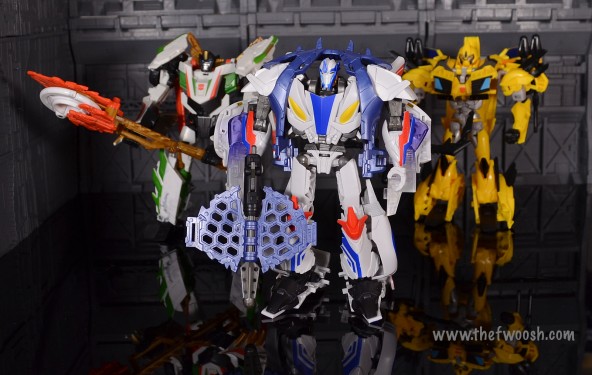 His weapon appears to be some sort of net-gun, an “electro-net launcher,” that immobilizes his adversaries by delivering an electric shock as it envelopes them. Perfect for catching Predacon dragons! It also doubles as an electric axe should he need to hack those dragons to bits. 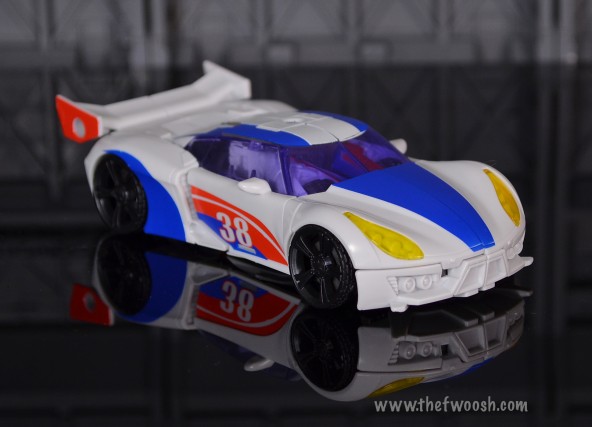 His alt mode could definitely stand a little more detailing because it looks a little too simple and toy-like as it is (I know that’s a stupid way to describe him, but I think you know what I mean). His transformation is surprisingly complicated despite his looking so simple. The instructions are lengthy, and more than once I contemplated setting them down to search for a video on YouTube to help me out. It’s his arms — getting them to fold up just right so all the car bits lock into place properly is very tricky and requires some patience. 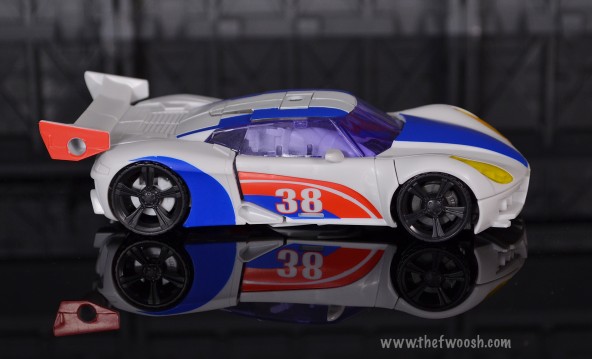 I have to say, though, the colors really pop in his alt mode. It’s clean and slick, and, most importantly, it looks fast. His purple windows add some much-needed variety as well, even if they reveal a bunch of arms and junk within. That’s definitely one of the drawbacks of these deluxe-class Autobot cars — no interior to speak of. If you want realistic, then it would seem Masterpiece is the way to go. 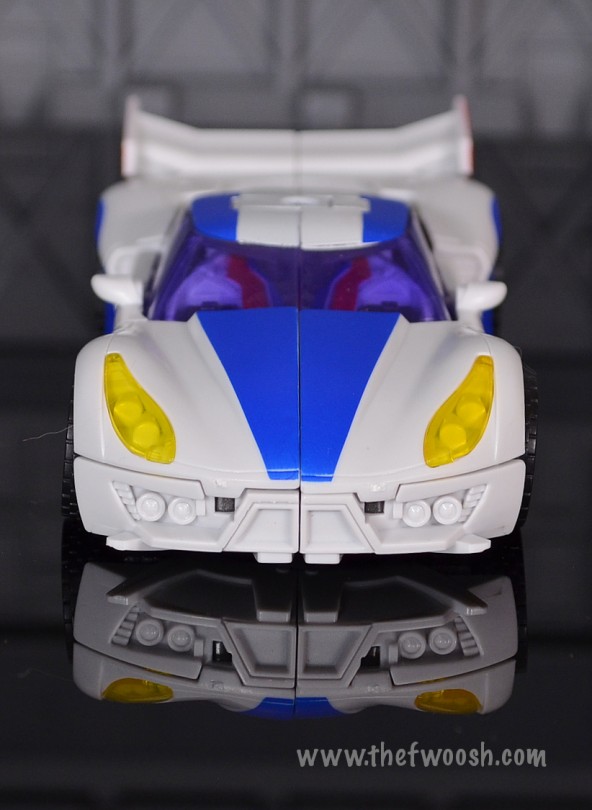 Ignore the giant cat hair sticking out of his passenger-side wheel. It’s exclusive only to mine. 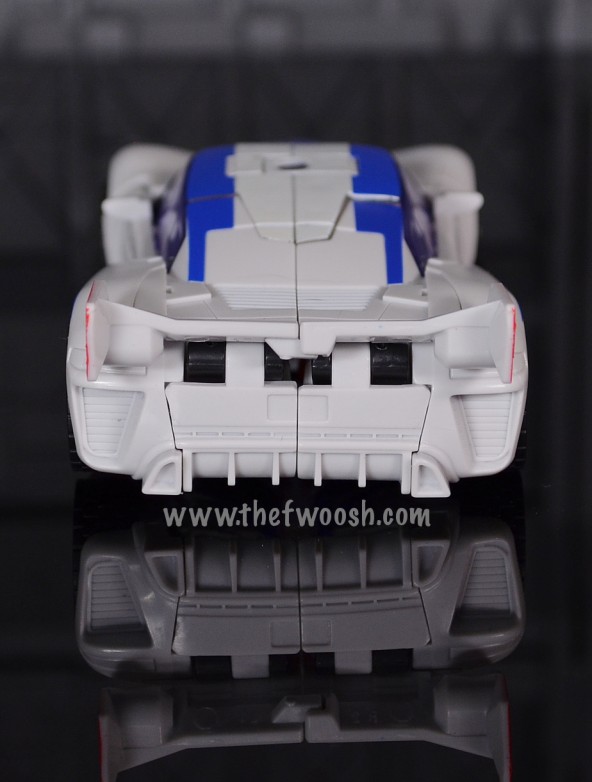 The rear of his alt mode is positively screaming for some attention from Reprolabels. It’s so plain as it is. 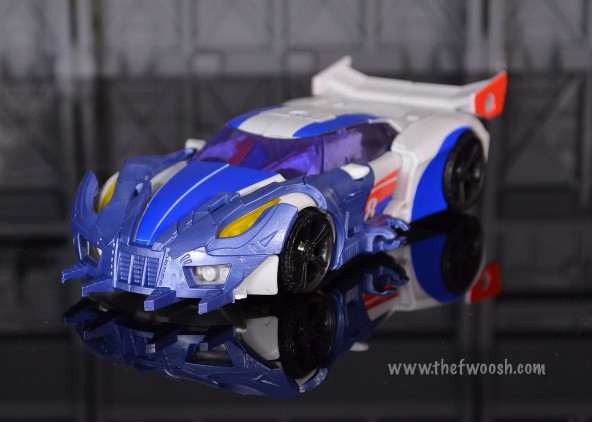 Again, the Mad Max armor adds a welcome depth to his alt mode just like it does with his ‘bot mode. It doesn’t look so much like a kiddie toy with this in place, and it makes it look rather mean and cool. I’m excited to see how this armor comes into play when the show finally comes back on the air in a couple weeks. 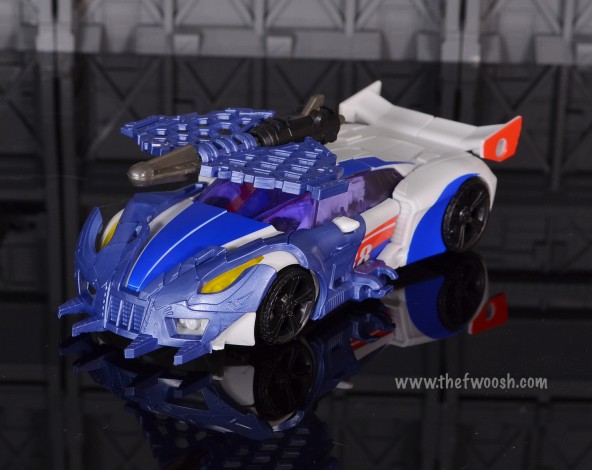 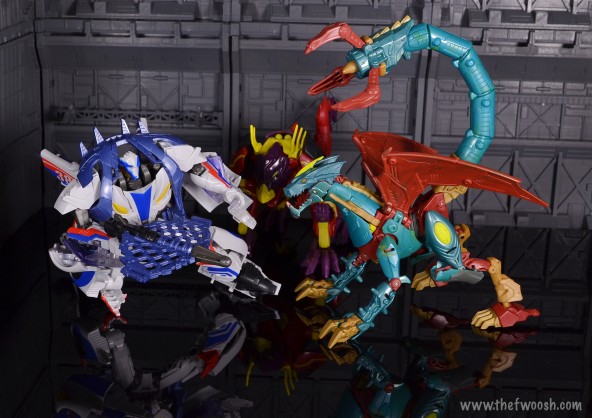 Smokescreen and all his wave-mates — Rip Claw, Bulkhead, and Starscream — are sure to be in high demand as the wave continues to trickle out. The good news is he’s packed two-per-case, so he shouldn’t be that hard to find. He’s a must for any Transformers Prime collection and I am super excited to add him to my Autobot crew. He’s currently popping up at Target and Wal*Mart, so keep your eyes peeled if you’re after one. The full set of four can also be purchased from Big Bad Toy Store should you prefer to order online rather than hunt.

Thanks for reading, and let me know what you think of Smokescreen!