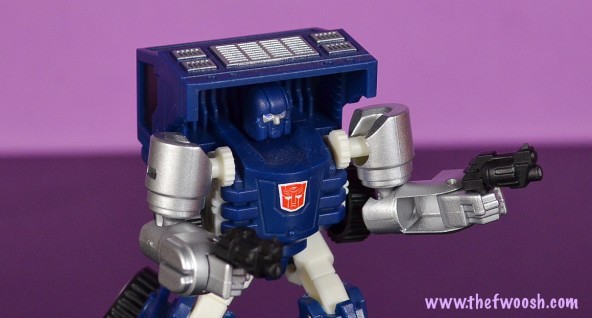 iGear has had a hit on their hands with their Mini Warriors series, a selection of ‘bots based on the original Transformers G1 Minibots. They’ve consistently knocked the ball out of the park with Hench (Brawn), Spray (Seaspray), UFO (Cosmos), and Rager (Huffer), and their upcoming additions to the line that are expected to hit as soon as May look to continue this streak. Their sizes haven’t been as consistent as many would like, but that’s probably about the worst that could be said for any of them, really. Each ‘bot has been crafted with their classic look straight from the G1 cartoon in mind with a few stylistic elements tossed in for the sake of giving them some modern appeal, and, so far, each release has been a treat. Each ‘bot except Tubes, that is.

Why was Tubes (Pipes) given such a half-hearted execution (no pun intended, IDW fans)?

Maybe I’m being too critical here. iGear has never come out and said Tubes is supposed to be Pipes from the G1 continuity. Maybe that’s just an assumption fans like myself are making. Maybe this isn’t supposed to be Pipes at all; maybe this is supposed to be Huffer’s blue and silver cousin or something. If that’s the case, then I guess that’s cool, but I’ll bet nine out of ten people who bought Tubes bought him with the expectation of his serving as a Classics/Masterpiece/whatever Pipes. But, unfortunately, Pipes he ain’t. 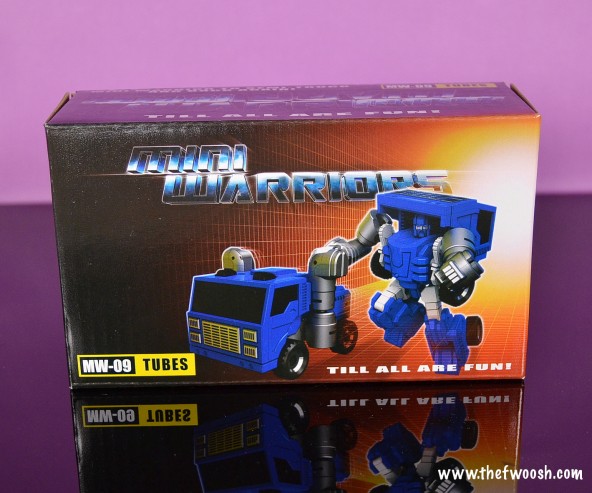 The packaging is exactly what you’d expect from iGear if you’ve purchased any of the previously-released Mini Warriors. It looks sharp, and the figure rests securely in a plastic tray within. 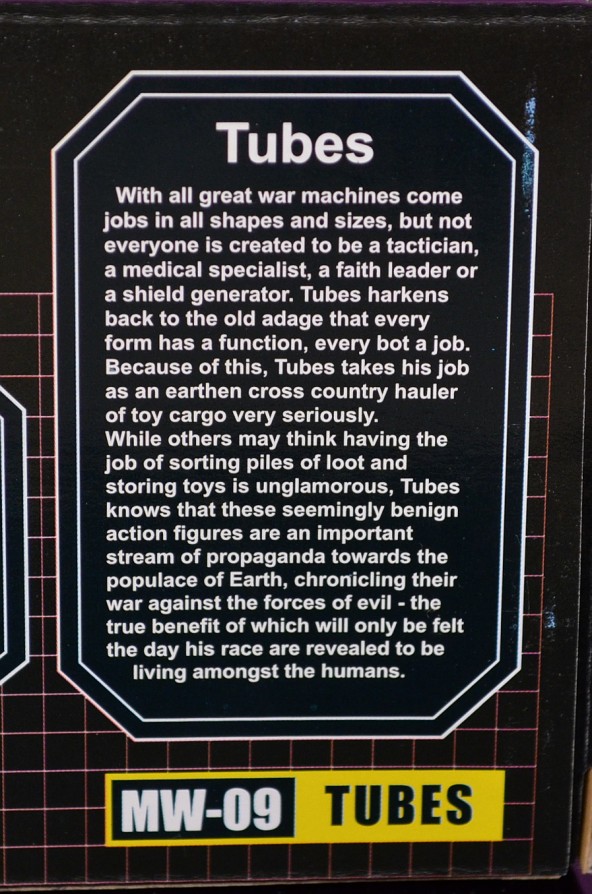 Here we get iGear’s bio for Tubes.  It sounds like he’s a pretty low-level worker whose job it is to haul toys around and sort through various “Piles of Loot” (nice nod to BBTS there). It certainly doesn’t sound very “heroic,” but it does sound kind of fun!

Once he’s freed from the plastic tray, the troubles immediately begin. There was nothing wrong with him at all in terms of quality control — he’s as solid as he could be expected to be — the problem here is his execution. He’s a straight-up repaint of Rager (Huffer). The thing is, while Huffer and Pipes were always a bit similar in terms of their design, Pipes was never just a repaint of Huffer — he was an almost entirely new sculpt and had a different transformation. But what we get here is just a blue/white/silver Rager. I mean, the sculpt still looks good and all, but it just isn’t Pipes. Let me put it this way: if Huffer were He-Man, than Tubes is Faker. That almost makes more sense and I’m starting to wonder if I should have put a Decepticon sticker on him instead. 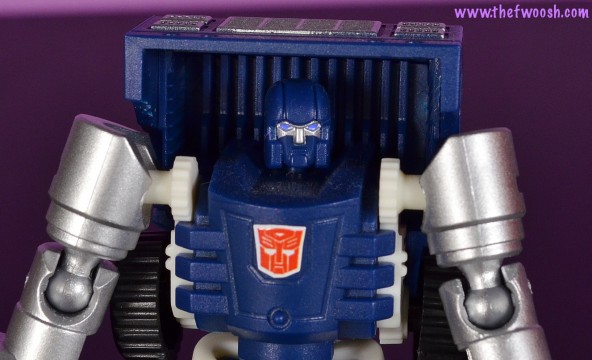 I was hoping — no, praying — we’d at least get a new head for him, but nope. All it is is Rager’s head painted to somewhat resemble Pipes in the most half-assed way imaginable. By painting only half his face, the belief here appears to be that it’ll give the illusion of there being a blue faceplate just below his nose that hides the rest of his facial features. Does it succeed? Of course it doesn’t. In fact, it’s difficult to not laugh at it the first time you see it. Unfortunately, once the urge to laugh fades, you’re left with the realization that this is really the route they chose to take. 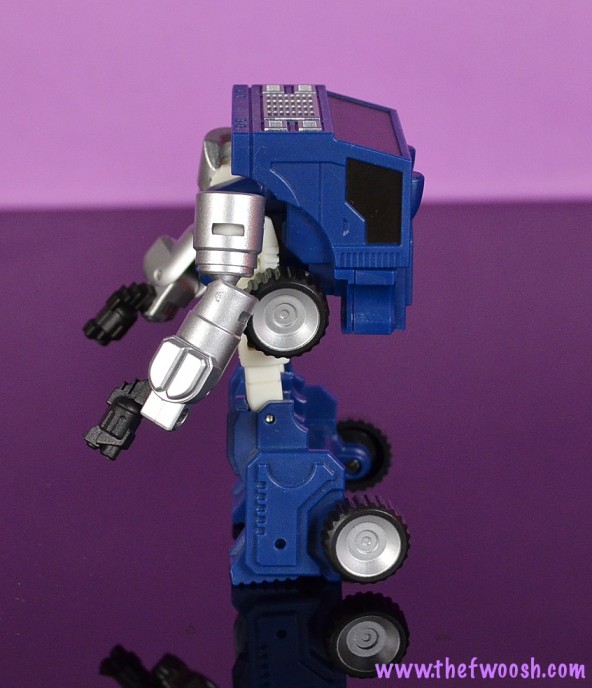 Blue Rager from the side… 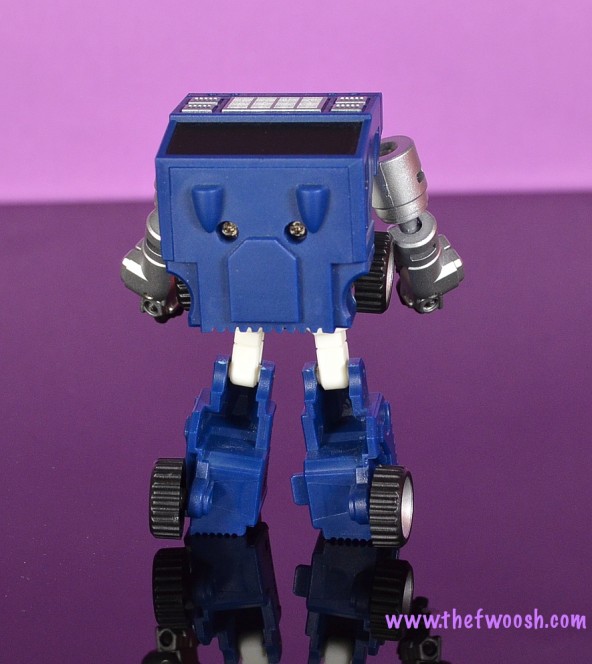 … and from the back. 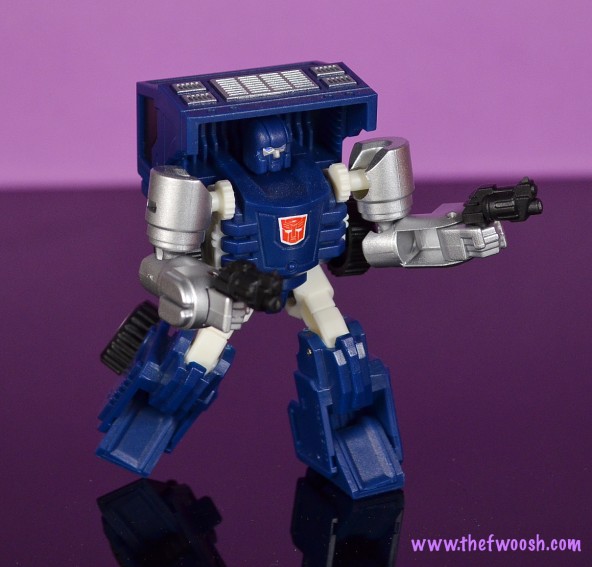 Like Rager, he comes with two small black pistols. The original Pipes never came with any accessories because he didn’t have any hands with which to hold anything, so I guess the pistols are an improvement over nothing. 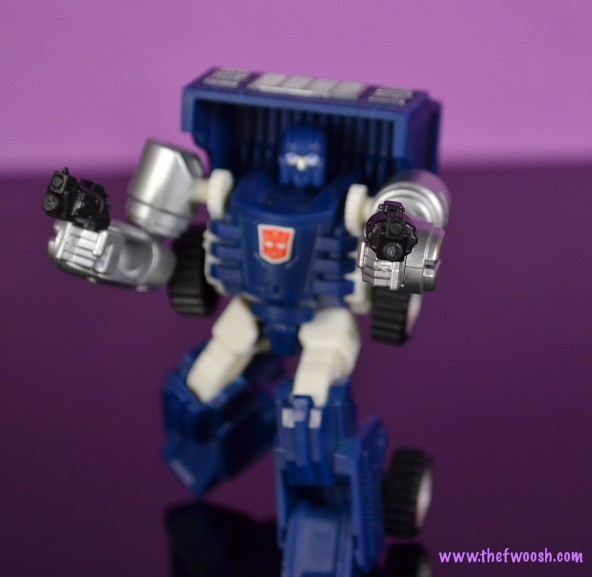 I do like the guns, though. They give reason to put him in action poses. Pipes is suddenly a pistol-packin’ tough guy. Or something. 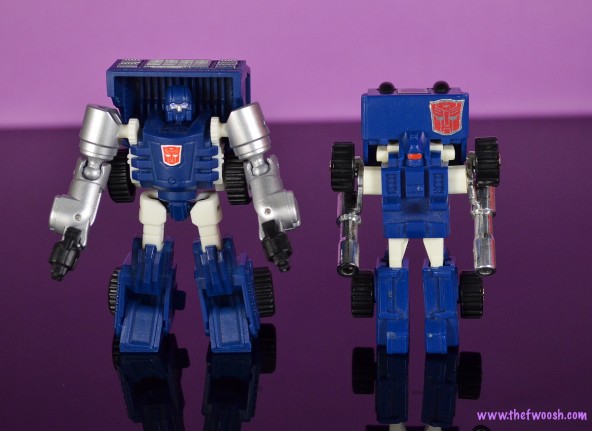 His colors are an almost perfect match to the original Pipes, except for the visor/eyes. And as it is plain to see, Tubes misses the mark quite a bit when compared to the original, most notably when it comes to his “hood.” Huffer had the hood, not Pipes. Pipes had this sort of “block” behind his head that displayed his faction symbol. It was never an elegant design, but it differentiated him from Huffer, and in a toy line rife with repaints, that design choice really made a big difference back then… 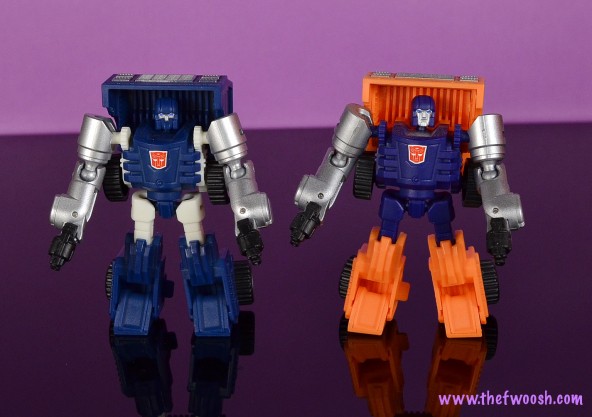 … because, as you can see in the pic above, without those design elements, all he is is a blue Huffer. At times when I look at him, I think it comes so close to what it’s trying to do. Because of the size of the head and the contrast in paint apps, the paint job almost does the job of a proper new sculpt if the lighting is right.  But, in the end, it does inevitably fall short. And then there’s still the problem with the hood. Sigh. 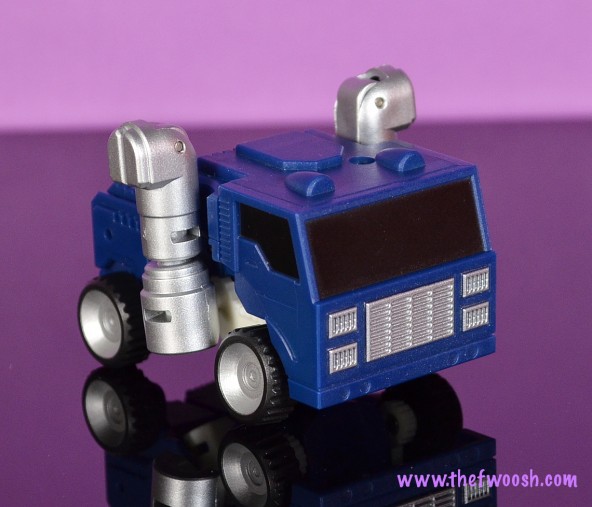 His alt mode maintains that “toy” look the original Minibots had. It looks good, it looks fun, but it definitely looks like a kiddie toy compared to what we’ve grown accustomed to seeing from Transformers toys these days, official or otherwise. 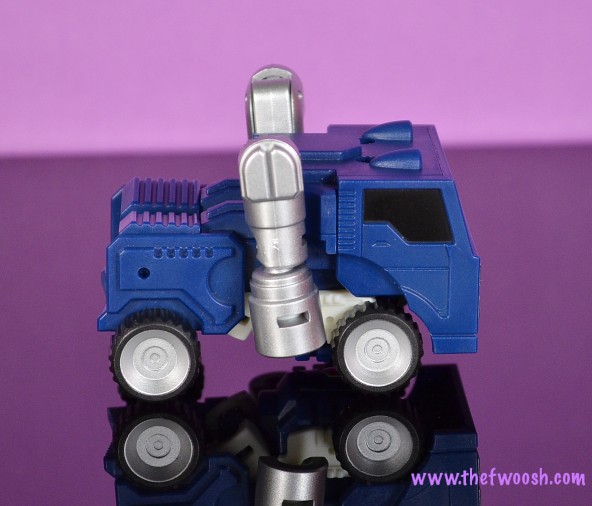 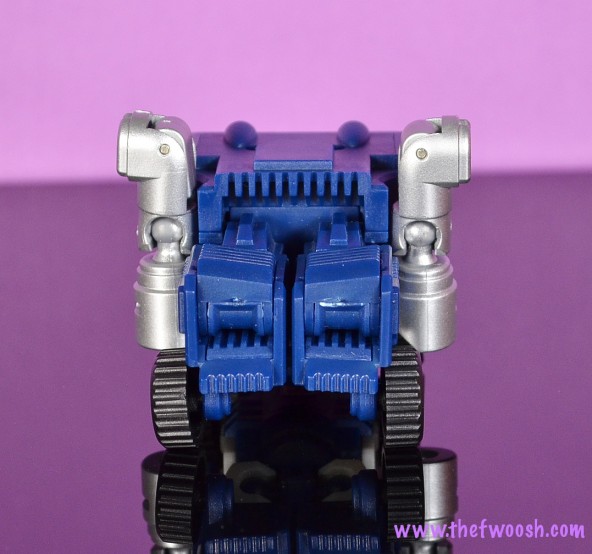 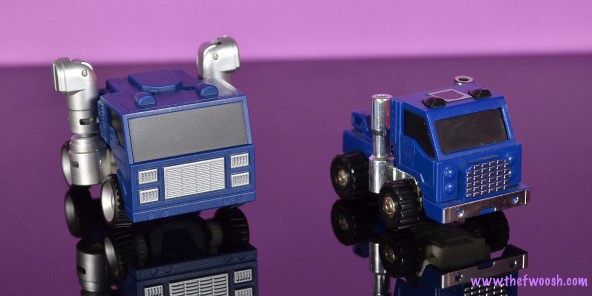 As you can see, Tubes is very close in appearance to the original Pipes — in alt mode. I wish the ‘bot mode were this faithful. 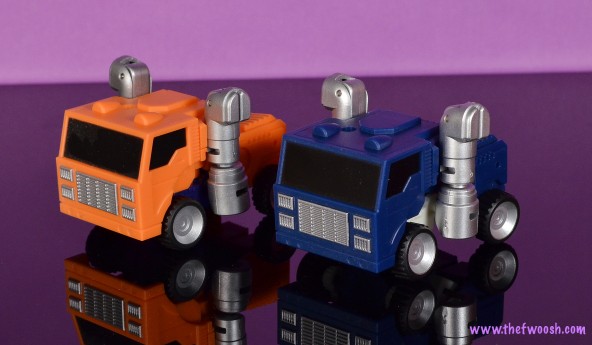 And, once again, he looks like a blue Rager/Huffer. There are no differences aside from color. 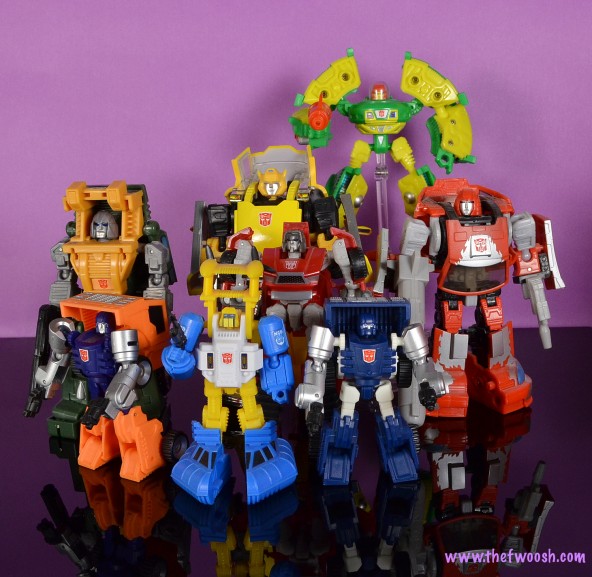 Even though he’s so far off the mark, he still looks good when displayed with the other updated Minibots. It’s not enough, however, to quell the feeling that he was a wasted opportunity. We can only hope iGear sees the light and gives us a proper Pipes with an all-new sculpt and transformation that does more closely resemble the original. This one will serve as a decent placeholder until that day — hopefully — comes.

And here’s one final shot for the fans of More Than Meets the Eye: 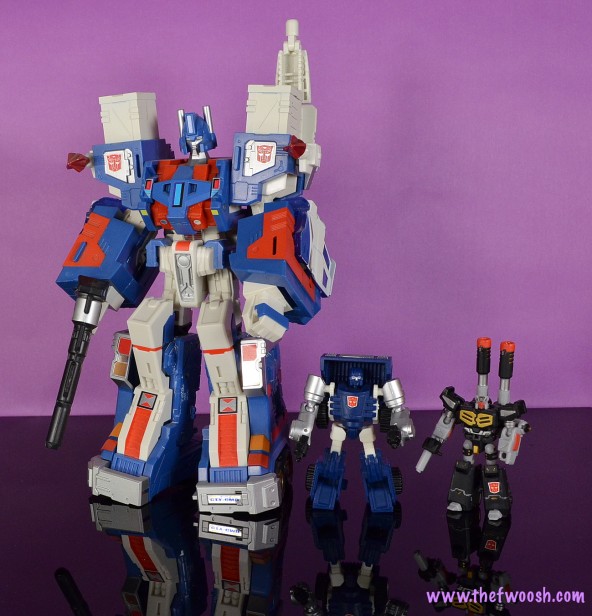 Tubes is a limited edition of 500 worldwide and can be purchased from Big Bad Toy Store if you’re interested. He’s not a bad figure, but if you really want a Pipes, then this may not be the figure for you. However, if you have yet to pick up the Rager mold, then this is not a bad figure to get since Rager is long sold out just about everywhere. At the moment, BBTS only has him available as part of a set with Manatee, a repaint of Spray in colors intended to match a GI Joe vehicle. And be warned — they’re not cheap.

It took me a long time to do this review because I was so underwhelmed by him when I got him that I just set him aside and forgot about him, but then I read More Than Meets the Eye #15 this weekend and had Pipes on the mind, so I guess the inspiration finally hit me. Pipes deserves to be avenged! Both in the comic and in the toy line.