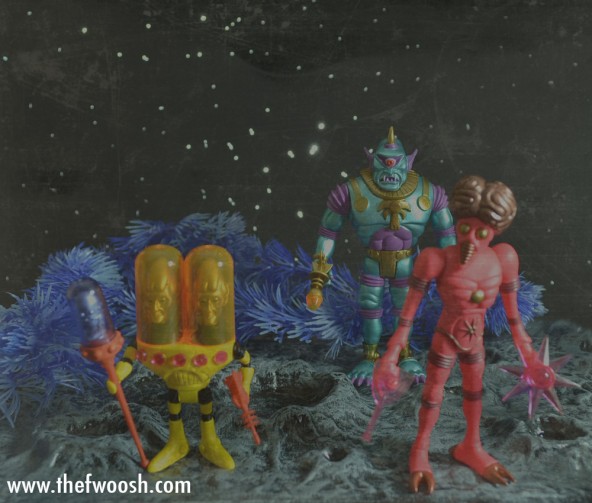 You know, there is something so cool about a toy line where the action figures come first. Original toy properties are almost unheard of these days when some other media is not already present, but, man, if the Four Horsemen aren’t making a go of it with their 7th Kingdom and Gothitropolis lines. Well, when they are not busy working on those lines, or a myriad of lines for Mattel, they are keeping themselves busy churning out figures that hold the same spirit of original toy lines — The Outer Space Men. They have been adding their fantastic updates to the original toys/concepts developed by the great Mel Birnkrant for a few years now, and with every single release, you get more opportunity for imagination than some entire properties can muster. That is something that transcends all of the talk, the sculpt, the paint (both of which are, of course, great), and everything else because when you have a action figure in your hand, it is supposed to inspire imagination and creativity. The Outer Space Men offer that in galactic-sized doses.

I have readily admitted that, prior to the 4H getting their hands on this license, I had never head of the OSM. Naturally, as the original line was released in the 1960s it was well before my time, but the release of the ColorForms of the 1980s squeaked under my radar as well. So, when I first saw the prototypes for the first two series, I was able to take them completely on their own merits. Metamorpho and Astro Nautilus certainly struck me standouts, but what I loved then, and still love now, is that they capture that “space age” feel and one of the biggest compliments I can pay these figures is that they make me wish I could have been around during that time and place of the 1960s to be at the height of the wonder that is outer space, and the possibility that these guys could be making their way from the beyond. Who am I kidding? Space is a big enough place that I am pretty sure that even in these modern times, the OSM are out there somewhere. Somewhere on my toy shelf, too!

As I said, Metamorpho and Astro Nautilus rank in my favorites of the early series, but I have been waiting impatiently for the giants: Cyclops and Colossus Rex. Well, Cyclops has finally arrived as the first “deluxe” figure in the line and just as I suspected, he is the best of them of them so far. 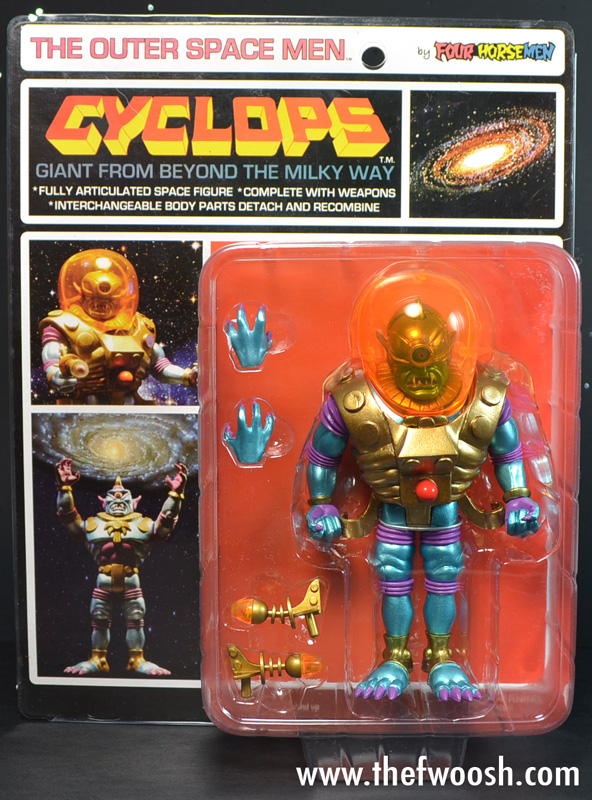 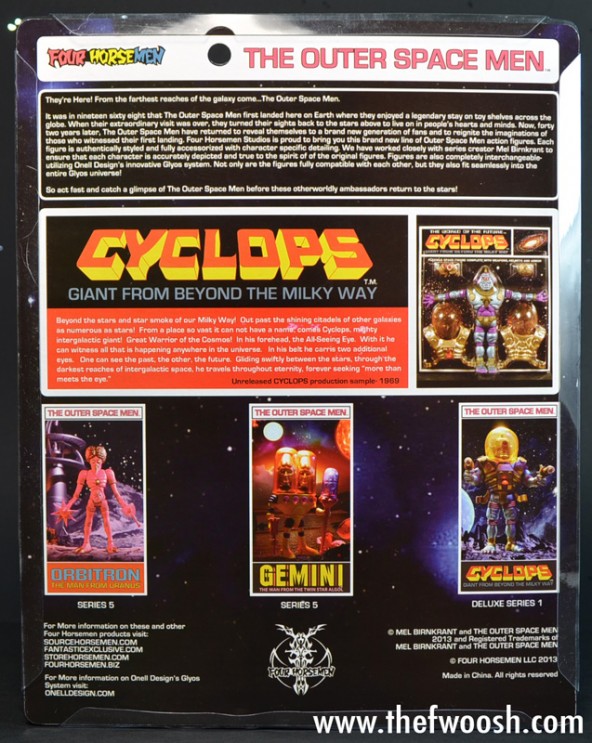 The giant from beyond the Milky Way arrives on our planet, and let me tell you, he means business. As much as I love getting the Alpha Editions of these figures (Beta, too), there is nothing like the “final” Infinity Editions of the OSM to really bring the full impact of coolness home. Yes, Cyclops’ size is imposing, especially compared to the more standard figures, but I think the sculpt and paint detail are what makes him so outstanding, and the amount of detail in both even outshines the rest of his outer space brethren. 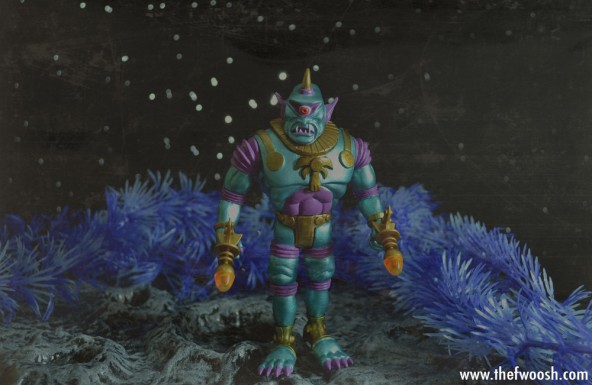 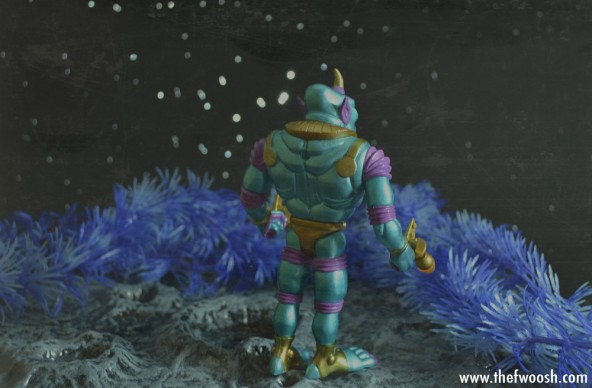 Built on the (now expected) Gylos joint system, Cyclops can be fully disassembled, and he includes his space helmet, visor, armor, two blasters, and an alternate set of hands, so all told, you are getting about 25 individual pieces on this over-sized card. While the Gylos system makes it possible to swap his parts with other figures in the line, I am not sure if that’s appropriate due to his imposing size. His elaborate armor includes twin holsters to keep his blasters safely at his side and it can snap on and off easily. I have to say that I find Cyclops the exception to my rule of usually liking all of the armor/outfit pieces on these figures. Personally, I think he looks better without them as it allows all of his detail to come through. 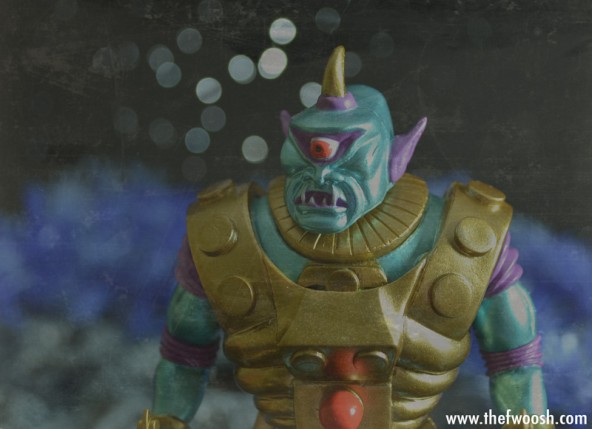 Speaking of, I absolutely adore the paint scheme on this figure. The colors match the original figure (as pictured on the card back) but, as you would expect, everything is heightened to fit with modern sensibilities. The metallic turquoise blue used on his body is a great color for the line and the gold and purple offset it well. His single eye is imposing and it looks like it could most certainly shoot a powerful blast as focused through his removable visor. Right now, he will be used as the attack dog for the more evil OSM guys, but I really cannot wait until he can go toe to toe with Colossus Rex. It will be quite epic. 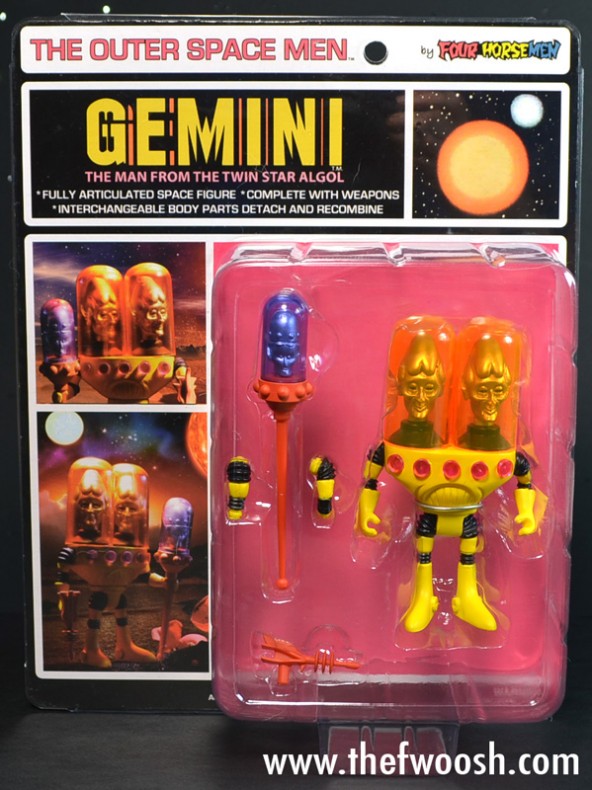 Gemini here gets the award for the strangest of the OSM thus far, and that is saying something. He is oddly shaped to accommodate his twin heads, but like all of the figure from this batch, he is well constructed with tight joints and good balance. Add his rather garish color scheme (again, that is saying something) to the mix, and the fact that he has two heads seems near normal compared to the rest of him. The bright yellow and black do stand out and when you factor in the bright orange helmets, your eyes will certainly not miss Gemini on the shelf. That being said, there is strange bit of cohesion that happens along all of these strange attributes, and that is certainly a accolade to the original design and execution from the Horsemen. 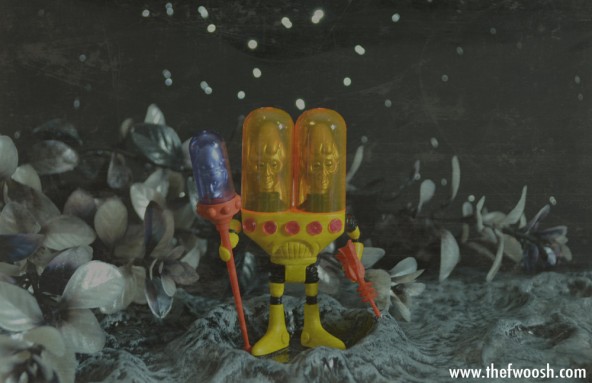 So, this is a guy with two heads (obviously), and while the two-headed monster/alien concept is nothing new, the odd appearance of the design of the heads certainly make him a standout. It is strange — his expression is not at all ferocious or imposing, but there is something about his look that kind of gives me the heeby-jeebies. He is like a cross between a cold mad scientist, a classic martian, and, well, an old lady. That is really the best way I can describe him and when you take that look, multiply is by two, and then shrink it down and put it on a staff, well, weird doesn’t really begin to describe it. The two-headed man from the Twin Star Algol will certainly appeal to the procurers of oddities, but having a look that can stand out among this class of space men is really saying something. 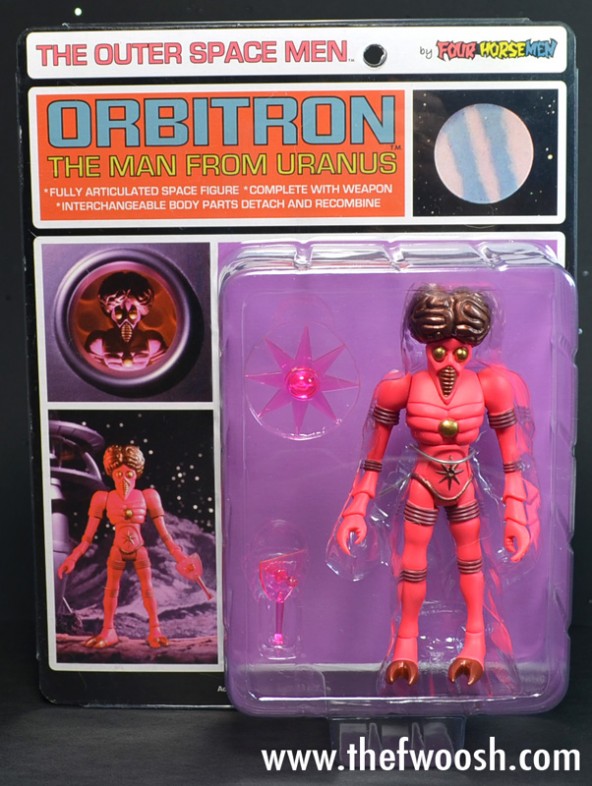 I like Orbitron. As you can see, he has a tall and lanky build that does not match up with any of the other OSM characters, and I don’t get the opportunity to say to my wife that “This is the Man from Uranus” very often, so he has that going for him. In all seriousness, though, the insectoid features combined with the whole removable-brain aspect makes for a wonderfully hot pink alien man. He is the only figure in this group that does not come with swappable arms, but as I said before, he is the only that has that whole swappable-brain thing going for him. More than just about any OSM that we have gotten so far, I think Orbitron is the most “alien” in appearance. He just has that classic “space age” and “space race” feel to him that shaped the imagination of an entire generation of kids who grew up during the 1960s. His vented mouth makes it easy to hear is almost robotic voice in your head, calm, cool, and collected right before he vaporizes you. Awesome. His accessories include a translucent pink ray gun as well as a star that is patterned after the emblem on the torso of the figure. He has a hole in his back so that you can plug the star in there, or it can be held in one of his claws. I have to say that I don’t find Orbitron’s accessories nearly as interesting as those of Cyclops or Gemini, but they all cannot be your favorite. So I have to admit, when the Outer Space Men first debuted, I did not really “get” them. I think that was because I was at a time when I was not really looking for anything that I did not have a pre-existing attachment. Well, I can readily admit when I whiff on something, and that is certainly the case with the OSM. This line is full of completely unique characters that have awesome designs for miles. I LOVE when I can get into a toy line now that is only a toy line because it inspires so much imagine as it is a clean slate to build an entire mythos. Now my only issue with them is that the new characters just don’t come out fast enough! I cannot wait to have the entire original collection on my shelf (c’mon Colossus Rex!) as well as the insanely cool new characters like Terra Firma. Since these are so limited in their runs, the price tag is at a bit of a premium for 3 3/4 inch figures, but as you can see, they are very cool and you will be supporting a great DIY effort by the uncompromising Four Horsemen. These bad boys are up for sale now at The Store Horsemen AND you can also get series 1-4 of the Infinity Editions if you missed them on the first go around.

*Thanks for reading and thanks to the Jersey Boys for sending along this set for a First Look. You are only limited by your imagination with the OSM, so make the most of it!