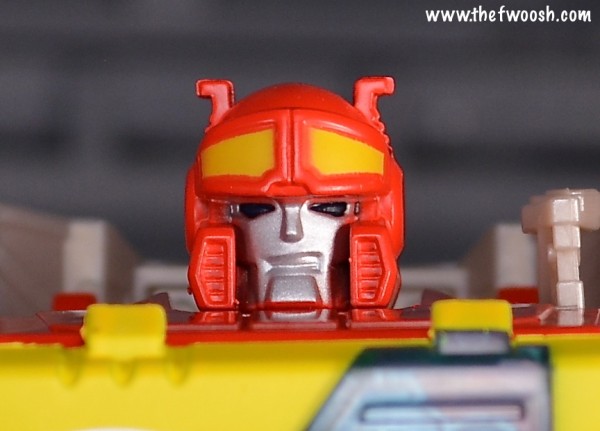 OK, I know we’re all high on all the Transformers reveals at this year’s Toy Fair in NYC. Hagop and SamuRon have been delivering the goods in terms of coverage, but let’s not forget that there are awesome new Transformers hitting the shelves right now, like Generations Autobot Blaster here! Blaster is a fan-favorite we all came to love during the G1 years because he turned into a boom box — a legit boom box, unlike his foe Soundwave. Blaster was awesome. But, despite his popularity, he hasn’t received a lot of attention from the Classics/Generations line at all apart from a G1 reissue as an SDCC exclusive a few years ago and as a jet/ terrible Soundwave repaint that saw poor distribution in the Universe line. Hasbro has finally rectified this with the release of Blaster in his Fall of Cybertron look as a voyager-class figure in the Generations line. Once again, he’s a Soundwave repaint, but this time it’s a good repaint! After all this time, it’s great to have a decent Blaster to add to the collection, so how about we take a look and see how he stacks up? 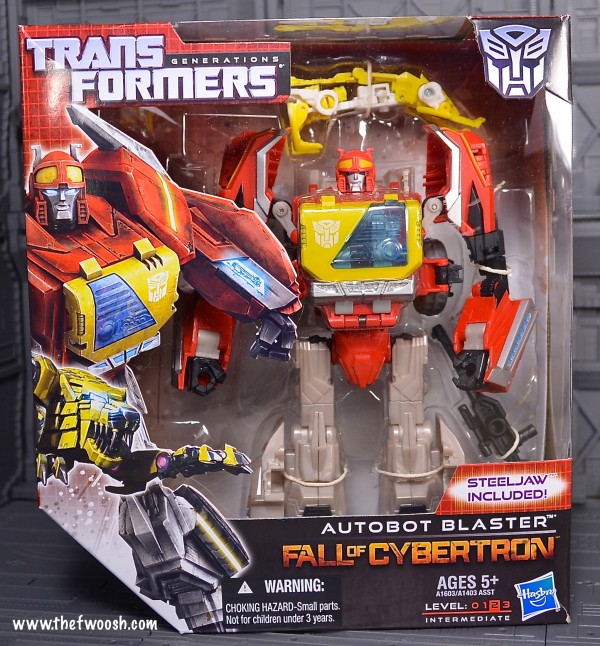 Blaster here is currently popping up at retailers everywhere, which is good news, but the bad news is he’s a one-per-case offering with his assortment-mate Grimlock. Given the nostalgic affection many hold for Blaster, he may prove to be a tough one to track down. So if you’d like one, a bit of vigilance may be required. 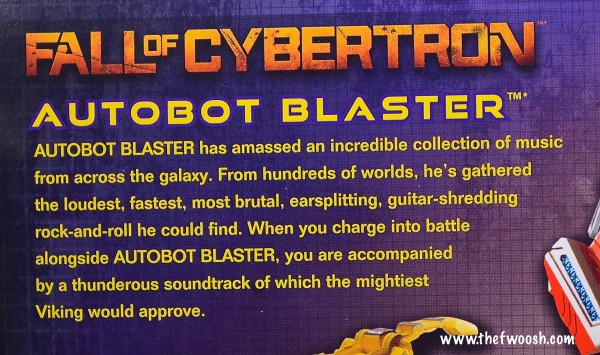 I have to admit, his bio is blowing my mind a little bit. Because he originally transformed into a boom box, I tend to associate him with ’80s hip-hop and dance music, and the fact that he spoke in rhymes in the original cartoon only served to solidify this perception. His coloring also creates a similar association in my mind with early hip-hop and dance music — the red/yellow/light grey combo suggests fun. I definitely don’t associate him with “guitar-shredding rock-and-roll” (or heavy metal, as it were) and Vikings. I LOVE heavy metal and vikings, don’t get me wrong, but I’m having a hard time associating, say, Scandinavian death metal with Blaster. I’m certainly not opposed to it, but it just feels so odd to me. After reading this bio, it’s hard to imagine him speaking in rhymes like he did in the ’80s. Maybe FoC Blaster sounds like Cookie Monster? I don’t know. 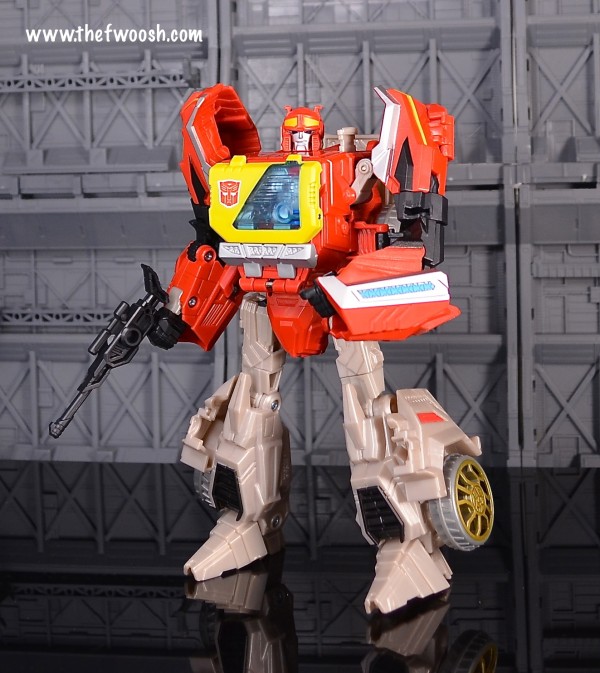 Unlike the G1 Blaster, which was an original mold and NOT a Soundwave repaint, this Blaster is an almost straight-up repaint of the voyager Fall of Cybertron Soundwave. His head, chest plate, and gun are new, but that’s about it; everything else is just a red/grey Soundwave. I passed on the FoC Soundwave/Soundblaster, so this mold is new to me. And you know what? I like it. However, I have to point something out before we continue: you’ll notice mine has a red Autobot shield on his chest. The very first thing I did when I got him out of the package was to cover his white Autobot shield with the more G1 red shield from Reprolabels. I have this mental tick that will not allow me to leave a white Autobot shield be, so the red one had to be placed over it with the quickness. I just think it looks so much better. 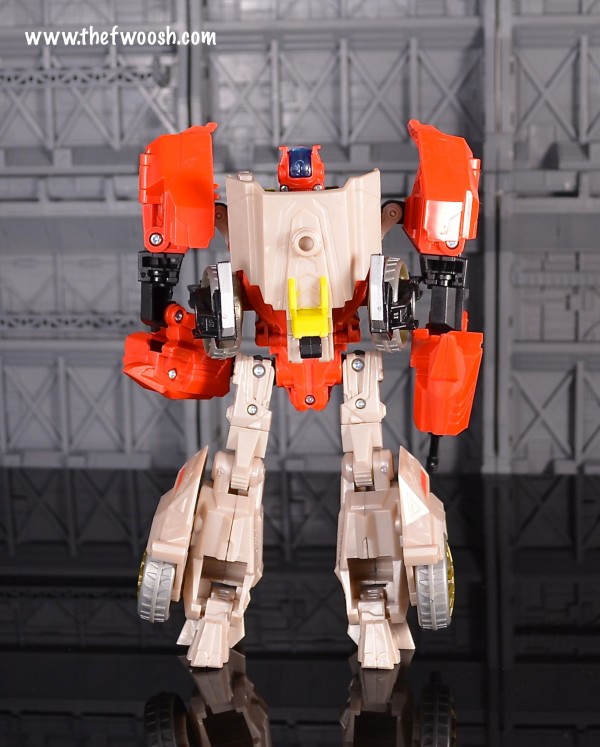 Unfortunately, he does suffer from the “hollow syndrome” all current Transformers seem to be afflicted with, but the good news is this mold does a decent job of hiding it. It’s kind of visible in his legs, but it’s not horrible. 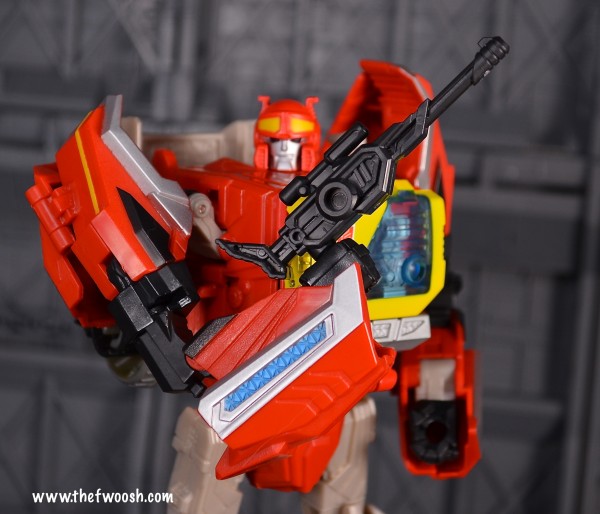 His gun definitely harkens back to the G1’s weapon, which is very nice to see. I love it when Hasbro and Takara see fit to include a nod to the original toy, so this “blaster” really hits the spot, no pun intended. The gun is the only “true” accessory he comes with, unless you count Steeljaw as an accessory. I don’t, personally, but your mileage may vary.

The original G1 Blaster towered over his fellow Autobots, and this version is appropriately large in comparison to his buddies. He’s not huge, but I think he’s a nice fit in a Classics/Generations collection in terms of scale.

My primary concern with his size was whether or not he would fit in a display that is mainly comprised of Masterpiece figures. Blaster and Soundwave are usually depicted as being roughly the same height, so he comes up a little short when posed with the new Masterpiece Soundwave. The difference in height isn’t horrible, and while he is not an ideal fit, he works decently enough for me until Hasbro/Takara produce a true Masterpiece, or someone produces a “Masterpiece-esque” Blaster. I hate buying figures to serve as mere “place holders,” but I’ll be honest — if a true Masterpiece Blaster does see the light of day, this version is gone. 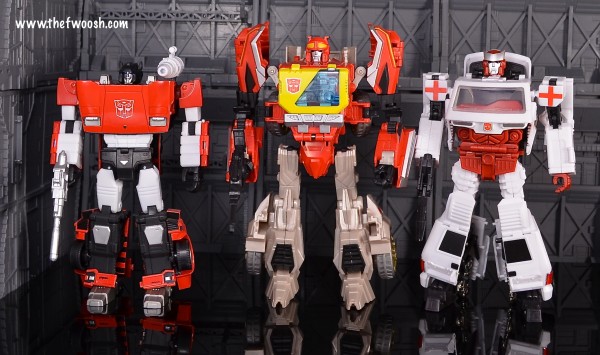 He may not look all that great with Masterpiece Soundwave, but he fits in with the Masterpiece-scaled Autobots well enough for my liking. He’s taller than both Masterpiece Sideswipe and iGear’s Medic (not-Ratchet), so that still makes him one of the taller Autobots in my display, so, for me, he works. And his design is just “G1” enough to not stick out like a sore thumb in a display made up of G1 Autobots. 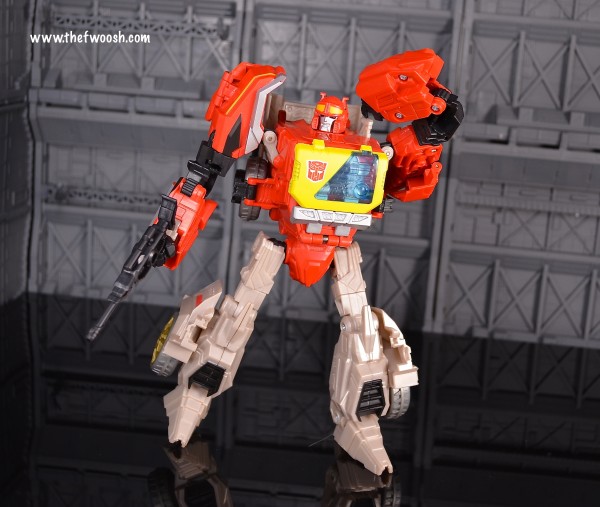 He has a decent amount of articulation and can actually “press” his eject button to release his deployers. Like the FoC Soundwave, Blaster here also comes packed with one deployer. In Blaster’s case, it’s Steeljaw. 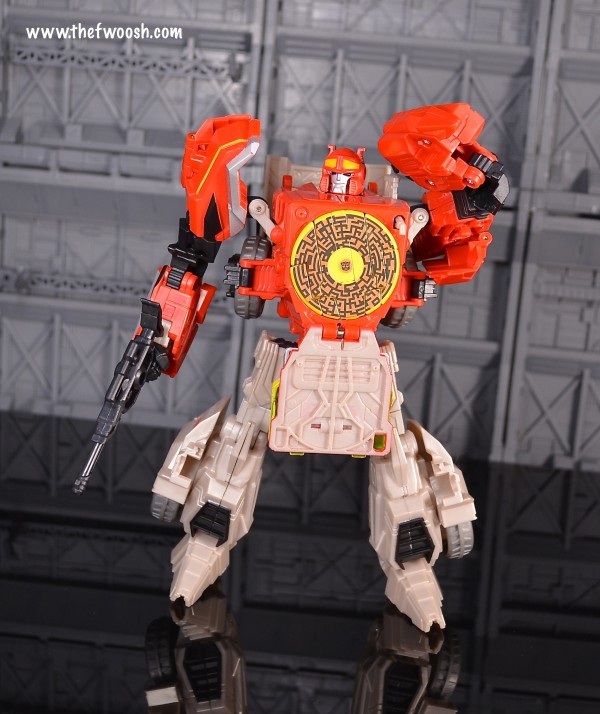 He can store several deployers in the space in his chest due to a handy mechanism that also helps him “eject” them, However, for now, all he has is Steeljaw to launch from his chest until Rewind, Eject, et al. are released. Unless you want to pop in Rumble or Lazerbeak, that is, but that would be just plain wrong. 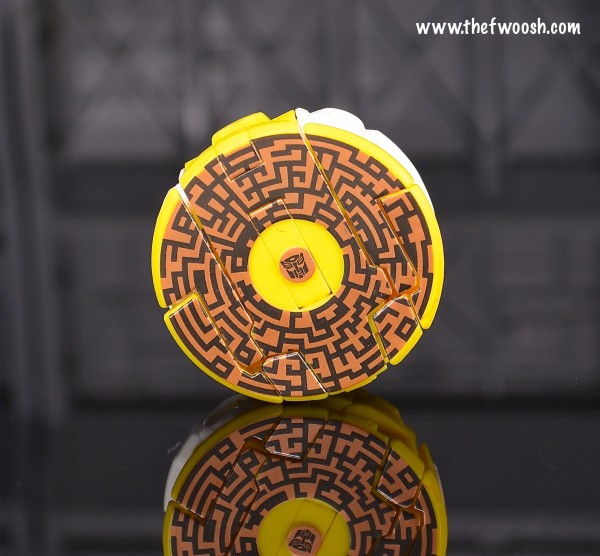 Instead of cassettes (what’s a cassette?), these new deployers transform into “data discs.” It’s a cool-enough concept, but the execution isn’t perfect. The G1 cassettes often looked like little jigsaw puzzles, and these are right in keeping with that tradition. The lines are very distracting. They’re a cool idea, but they’re just not 100% “there” yet. On the backside there’s a button in the center that, when pressed, activates Steeljaw’s transformation. Again, it’s an awesome idea, but not 100% there yet. He often get’s stuck halfway through his transformation and has to be helped along by hand. 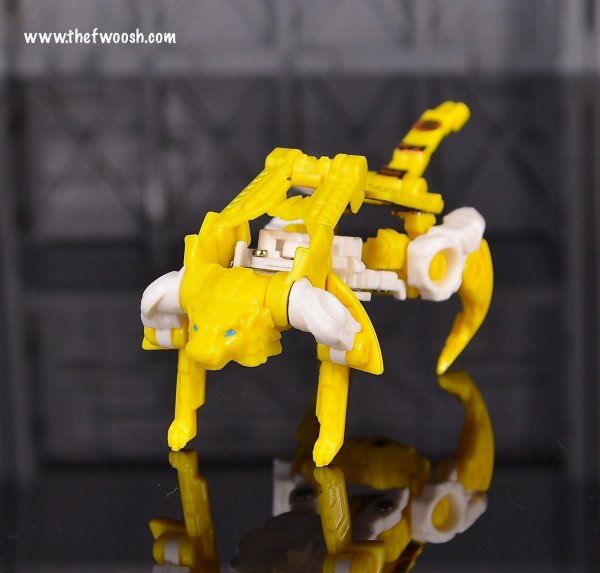 To be blunt, Steeljaw is a bit of a mess. He only sort of looks like a lion and he has very little articulation. Most of his moving parts don’t lock into place at all, so he ends up feeling very floppy when picked up. 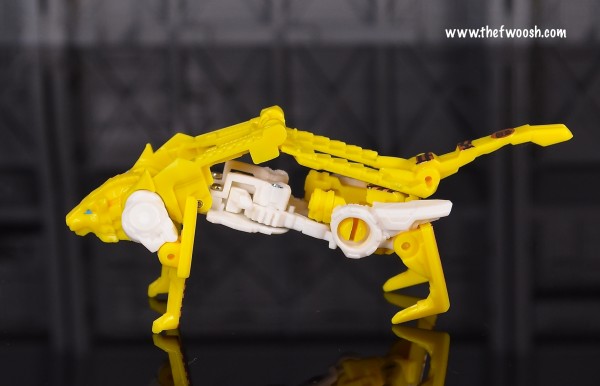 He’s just not a whole lot to look at, the poor guy. 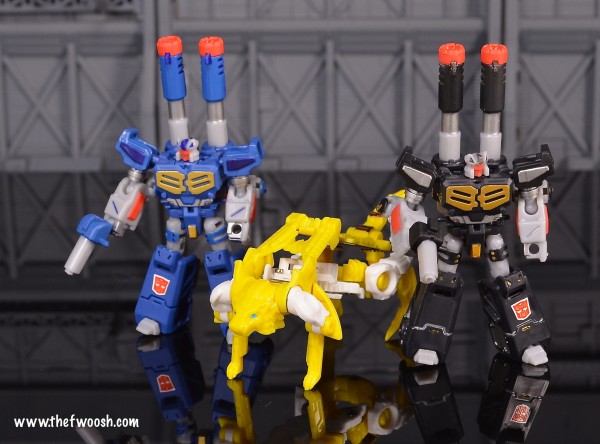 He fits in well size-wise with Perfect Effect’s awesome “Ejector” and “Rewinder.” Makes me wish someone had produced a Steeljaw that’s as good as these two. 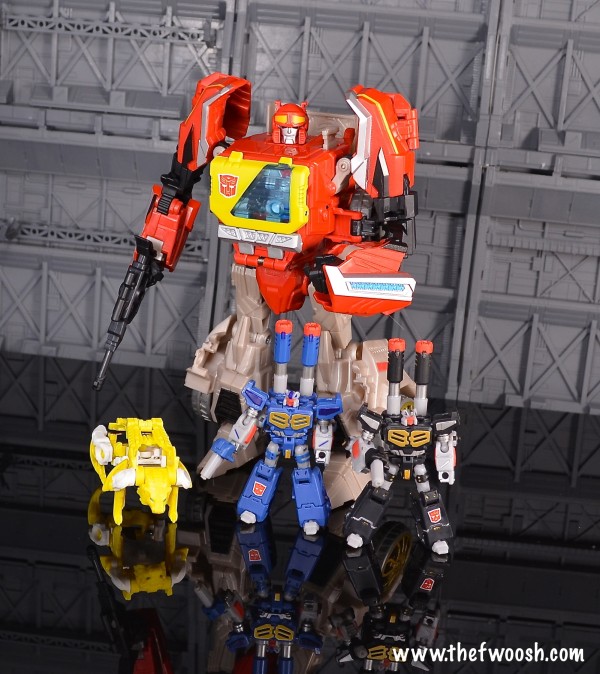 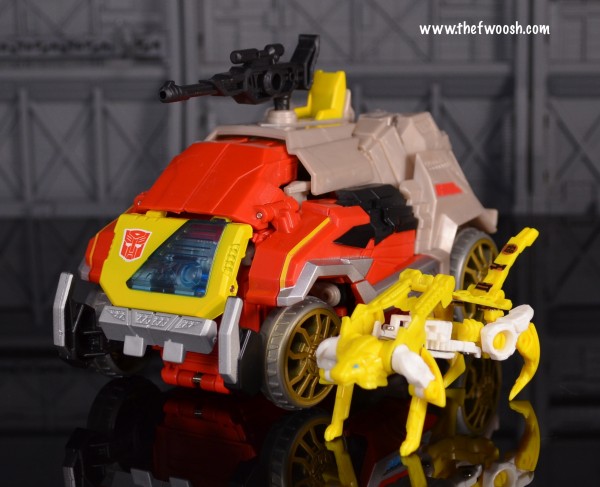 Like Soundwave, Blaster transforms into a rolling communications vehicle. There are fan-mode transformations out there that come fairly close to making him look like a boom box, but none are really all that elegant, and I do think the vehicle mode here is cleaner and better. 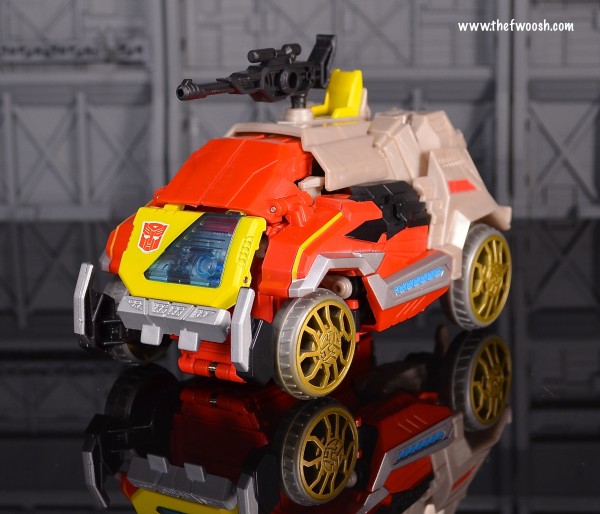 Since there were likely never any boom boxes on Cybertron, a rolling communications vehicle is just as good an alt mode as any, and, fortunately, it does manage to retain and employ many of Blaster’s “G1” characteristics. I actually like this alt mode for Blaster and I am typically one of those fans who expects everything to be a G1 homage of some sort. Maybe I’m getting my fill of that with his ‘bot mode? Who can say? All I do know for sure is that I like this alt mode. I like the little Autobot logos worked into his wheels. He’s too G1! He’s not G1 enough! The good thing about this Blaster is that he falls right in the middle, and he works whether your display is primarily Classics or primarily Masterpiece. I’m a big fan of the character, so I couldn’t be happier to add a Blaster to my shelves. However, if you already own the FoC Soundwave and/or Soundblaster figures, then this Blaster may just feel like more of the same. Since it’s a new mold to me, I dig it a lot. Keep your eyes peeled if you’re after one because, again, he’s packed one-per-case. He’s been spotted at Toys R Us and Walmart so far, so hopefully Target, Fred Meyer, Meijer, etc. aren’t far behind. Keep an eye on the online stores as well — BBTS has him available to preorder as a set with Grimlock, and he’s popped up on toysrus.com and Amazon as well. Happy hunting!

-Discuss on the Fwoosh forums