Man, if I’d been more on the ball, this would’ve been the perfect review to kick off our dedicated Transformers Forum “Garrus 9,” since these boys made their claim to fame there… 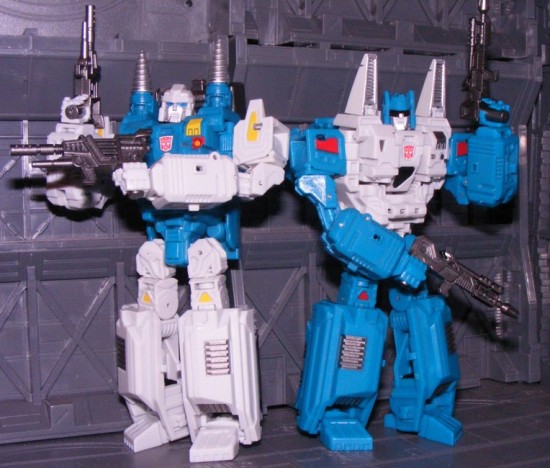 I can probably be forgiven, because like a lot of folks, these two outstanding little transformers from Mech Ideas almost snuck under my radar. Top Spin might’ve been right — he could almost pass for Top Secret!  Anyway, I hope this little review might help some of you on the fence toward getting these guys.  I think we’re looking at a major sleeper hit here. Packaging is just the right amount of effort, making for some simple, but still collector-friendly clamshells.  Both Apex and Geminus (Top Spin and Twin Twist, as they’ll be known from here on) are packaged in their vehicle modes, so naturally we’ll begin there. Both vehicles are nice, small Cybertronian numbers that come pretty close to emulating the feel of the 1985 Jumpstarters. The nice thing about Cyberton alt-modes is it frees you up to “scale” these as you need to for collection.  Top Spin makes a surprisingly convincing air-attack vehicle, and Twin Twist has a decent drill-tank all while basically sharing the same base body.  There are some really nice touches to sell the differences, though, like Twin Twist’s treads and appropriate pair of drills, whereas Top Spin has twin intakes and some wing stubs. I’ve found them both to be surprisingly fun in vehicle modes. Their small size and dedicated roles make them excellent infiltration bots, sent in deep behind the lines to crack and opening in the Decepticons’ security for the bigger Wreckers to pile on in.

Of course, the robot modes are the real gems here.  Carrying over from the vehicles, both brothers are very similar, but thanks to some great head sculpts, alternating paintwork, and a few choice parts, they’re distinctive enough to warrant having each in their own right. There’s some excellent articulation going on here, from ball-jointed heads, to seven individual joints in each arm, to waist joints, thigh cuts, knees, and rocker ankles, which means it’s damn near impossible to not have these guys posed ready for a fight.  They each come with a pair of pistols (differently sculpted, even), and a big ol’ wrecking hammer that can double as a cannon on the vehicle modes. Coming in under 6″, these guys are about your standard deluxe size, but I really don’t have to make much excuse to fit them in with my bigger MasterPiece collection. The Last Stand of the Wreckers was easily one of the best comics in the last few years, let alone among Transformers books. To get these two really puts the heat on to build a decent squad, and I can’t wait to see how excellent they’ll look with Hasbro’s very-Nick Roche Springer coming up.  But I hope that’s not all that Mech Ideas will contribute to the Wreckers — with this kind of excellent rendering of smaller-scaled bots, I think they’d knock a Ironfist or Guzzle out of the damn park. Also worth noting is this great little spoileriffic variant head for Twin Twist was initially available for preorders, but it’s still shipping with new orders, at least for the time being.  So if you haven’t caved yet, do so quickly.  You definitely don’t want to miss out on these guys as is, but this is a great little extra worthy of ordering sooner.