The Dark Knight Returns is seeing quite the resurrection in recent months. There’s the two-part animated adaptation of Frank Miller’s epic, there was a Christmas tree ornament that was available at New York ComicCon (no joke–I bought it), there’s the Batman Legacy figure my man DisThunder picked up last week, and now Play Arts is getting in on the action with a figure based on the Dark Knight Returns “skin” from the Arkham City video game. The Dark Knight Returns was one of those books that hit me like a ton of bricks when it was released way back when, and I’ve been dying for some quality (key word there) action figures based on the characters, particularly the aged, born-again Batman, so I was stoked when he showed up in the mail this week. So read on as we take a look at Play Arts’ Dark Knight Returns Batman. 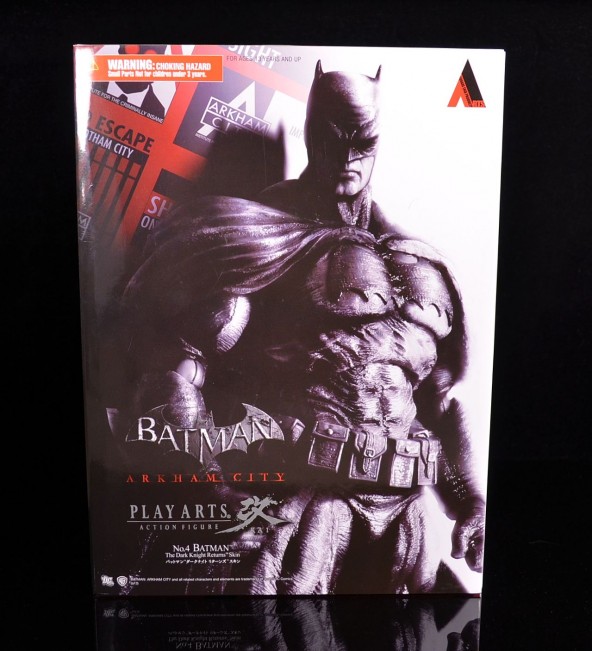 Typical for an import figure, the box is impressive and beautiful. It’s a window box that showcases the figure within and all its accessories. It’s the kind of box that you really just have to… keep. There once was a time when tossing out the packaging all my figures came in was as instinctive as taking a leak before going to bed. But now? All the boxes that are building up are starting to take up as much room as the figures themselves. But what can I do? They’re too nice to chuck out, and I’m hoping they’ll come in handy again when it comes time to move.

We’re given only the slightest gist of the original story. From this, we know Batman is an older man ready to kick the tail of those who deserve it. That’s really enough for me. For some reason, I love the idea of Batman being an older man returning from retirement to right some wrongs. 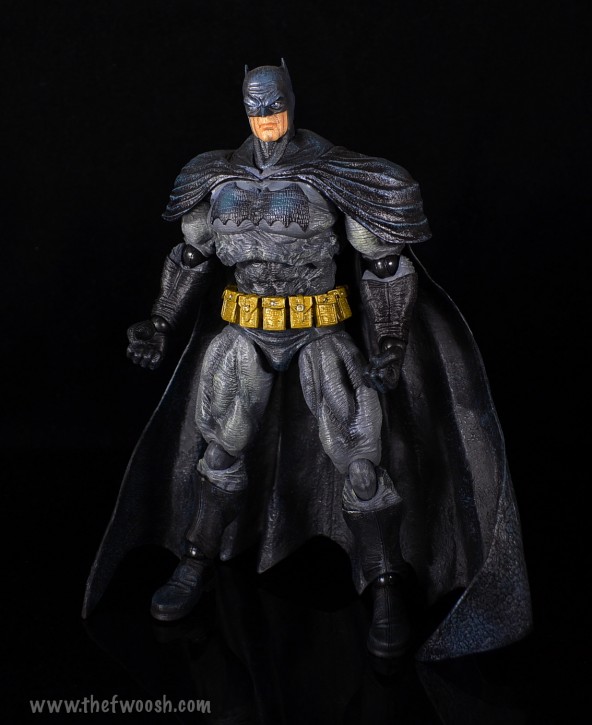 The figure itself is beautiful, but it’s not a direct adaptation of Frank Miller’s hero by any means. The older face is here, as are the huge barrel chest and the larger bat symbol on his chest. He looks older and thicker than the Batman we’re used to, and it’s a reasonably good rendering of his look in the game. The level of detail here is impressive. At times I think it may be a little too much, however. His cape and chest sometimes strike me as being a bit on the “busy” side. The paint looks good and there’s a nice mix/balance of gray, black, and blue. It looks like it’s meant to be a black cape/cowl with blue highlights, and I do think it succeeds in representing such. Something that bugs me, though — the black ball joints in his elbows stick out a bit too much. They’re too shiny and almost resemble eightballs lodged in his elbows. It wasn’t something I noticed at first, but now that I have, my eyes tend to gravitate toward them. I may have to paint them to keep them from bugging me. 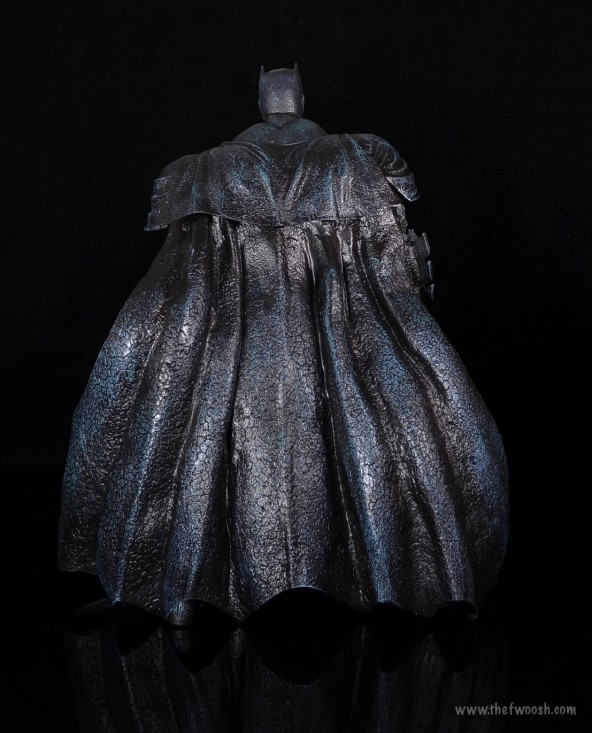 The cape is mainly one large piece that hangs off his back. There are smaller pieces that hang off his shoulders that break up the sculpt a little, and I can’t help but assume this is also meant to aid his articulation, but, unfortunately, as cool as it may look, the cape gets in the way — a lot. Especially around the shoulders and it limits the poses you can place him in. 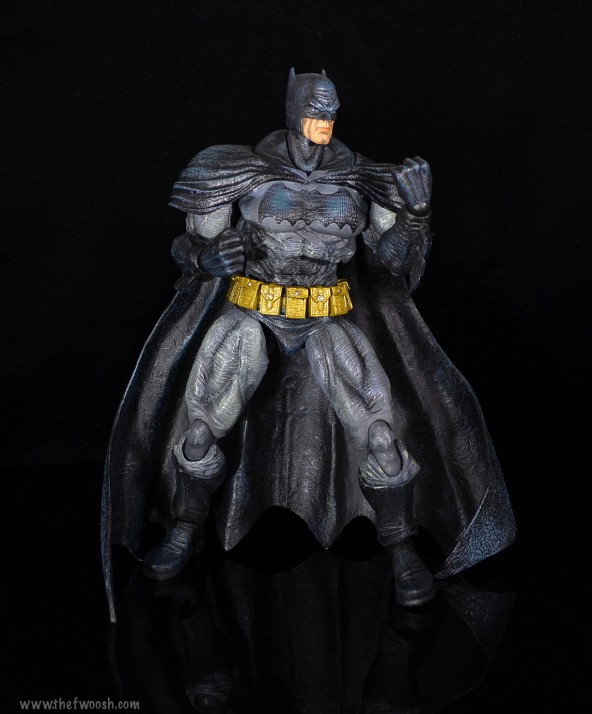 His arms really can’t move much higher than his left arm in the picture above. The cape portions that are draped over his shoulders get in the way and prevent his arms from being posed very effectively. That may be for the best, however. His shoulders are among the most poorly constructed I’ve seen in some time. The left shoulder on mine actually broke the first time I tried to move it, but thankfully I was able to fix it with some super glue. The shoulders each have a peg made of very hard, rigid plastic that pegs into another part of his shoulder. Simple and fairly standard, right? The problem is the portion that the peg attaches to is a rather soft plastic, and it’s easily torn apart if you’re not careful when moving his shoulders. So be careful with this. I’m now thinking that these aren’t “action figures” so much as they are statues that can be posed before your place them on your shelf forever. 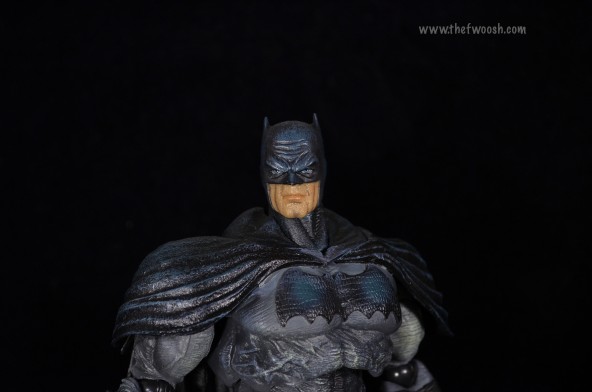 There is something off about the placement of his eyes, too. It seems as though they may be too low, or maybe too close to his nose. Either way, it makes him look a bit odd, almost birdlike. It’s a nice sculpt and full of subtle details, but I can’t help but think his eyes should be just a touch higher on his face. 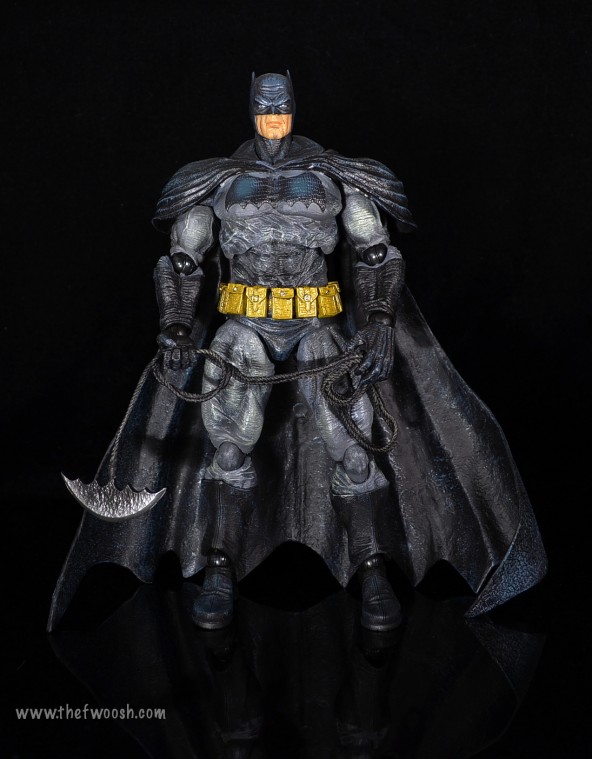 Aside from swappable hands, the only accessory he comes with is a Batarang and rope, sculpted to be held exactly as he’s holding them in the above picture. The rope can’t be unraveled — all it does is exactly what it’s doing in the picture. Again, there’s little play value here, but it sure looks cool and imposing on the shelf! 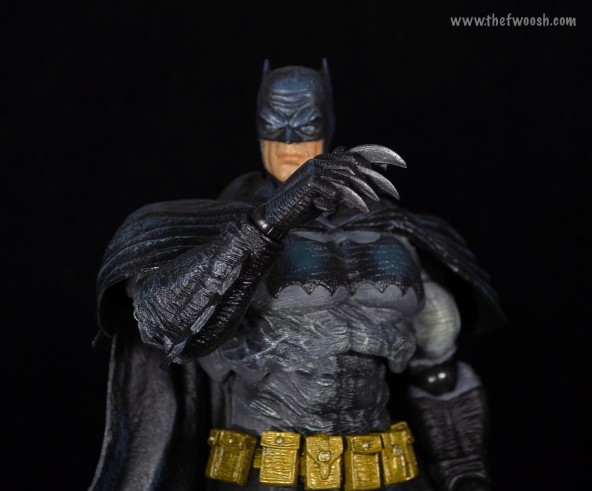 For swappable hands, he comes with two fists, two “gripping” hands with which to hold the Batarang, and another hand that comes equipped with some throwing knives. The knives are sculpted right into his hand and it looks awesome. 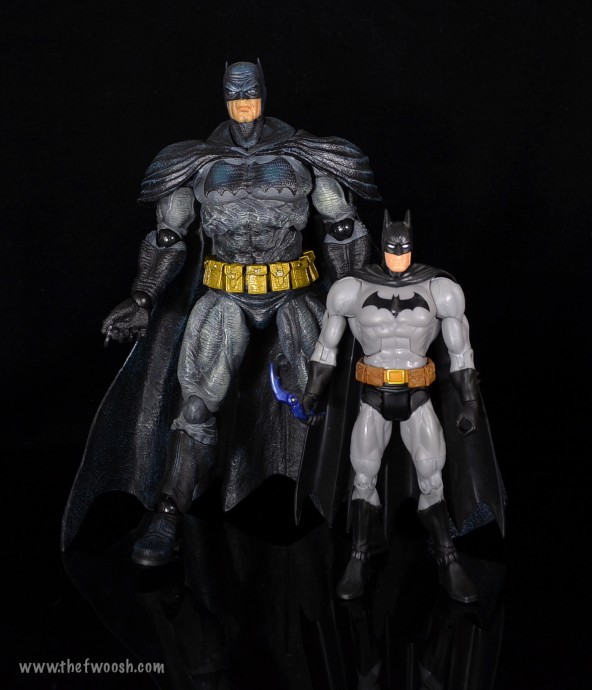 While he is an action figure, he’s not an action figure the way, say, a DC Universe Classics Batman is an action figure. He’s impressive looking and highly articulated, but too many compromises were made in his design that hinder his range of motion, and he’s just too fragile (especially those shoulders) to really be “played” with. He’s a display piece, first and foremost. 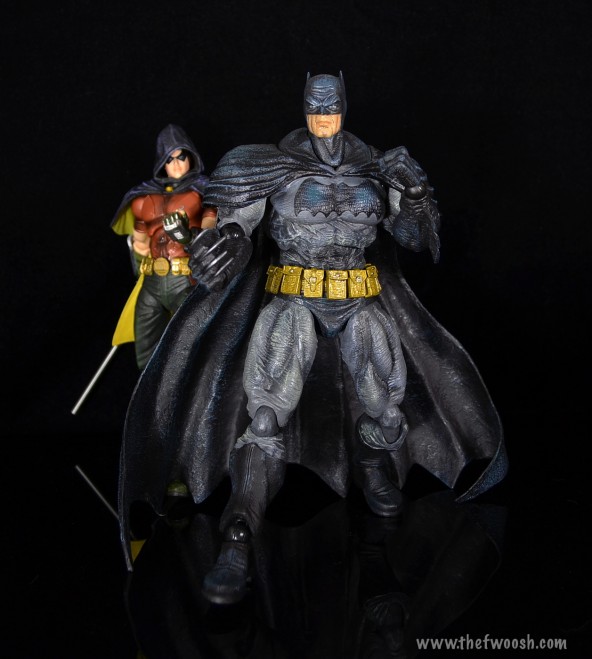 Even though there are some parts that I’m not 100% pleased with, I do think the figure when viewed as a whole is rather beautiful and he looks great on my shelf. I can easily see myself amassing quite a few of these Play Arts Kai Arkham City figures. This guy is actually due to be available in the US in April, but not being able to wait, I ordered mine from amiami.com so I could have him sooner since he was released overseas in late January.

So while he was expensive (I paid about $60 shipped) and provides not a whole lot of play value, I am happy I picked him up. I’m a sucker for all things Dark Knight Returns, so I’m happy to have this guy kick off my DKR collection. If you’re on the market for one, US-based shops like BBTS or Amazon should have him in early April. He’s available now from amiami.com, but once you factor in how long shipping may take coming from overseas, you may be ultimately better off just waiting for BBTS to get it.