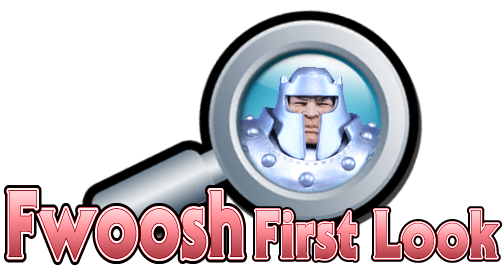 Are the halls decked? Are the candles lit? Lists made? All the rest of the traditions for all of the different holidays carried out? Well then, I can assure you that whether you have been naughty or nice, we still have presents to bestow upon you as we prepare to close out the Masters of the Universe marathon that has been 2012. The 30th anniversary of He-Man and his cohorts has been celebrated all year with an abundance of toys, and we have been able to have been ticking them off month by month with First Looks and Photo Features. So please do not think that we are forsaking the final month of the year and will not be supplying you with a fix of December goodness. I promise you, it is coming. However, as mentioned, it is the time of year for big celebrations and I really cannot think of a better way to celebrate in large fashion than to give a little preview of what is probably the most anticipated figure in the MOTUC line since the release of Skeletor. Finally, he is arriving. After so much time and speculation, the first of the “Quarterly” figures in 2013 charges onto your shelf in the form of Heroic Warrior stalwart Ram Man.

What else can I really say except that you are finally getting Ram Man? Since Mekaneck finally showed up earlier in the year, I think that Rammy represents the final piece of the essential Heroic Warriors puzzle for a lot of collectors. These days I get more excited by the announcement of guys like Fang Man and Octavia, but there is no denying that any Masters collection in any form would feel pretty incomplete without the Heroic Human Battering Ram. Not to be cliché, but all good things do come to those who wait and I suspect that the majority of the MOTUC-buying fandom is going to be very pleased when this figure starts to ship in January. Indeed, this is one of those figures that keeps that diehard fans happy and the casual buyers coming back to give Matty their hard-earned dollars. 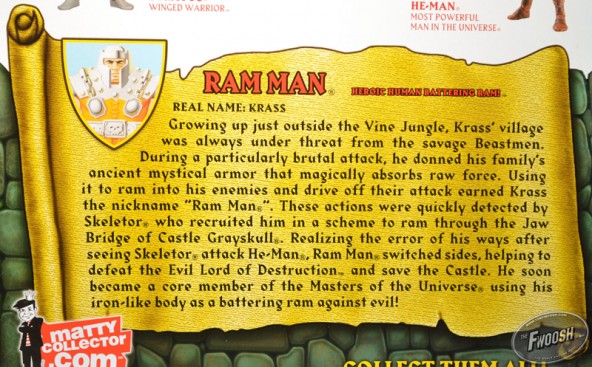 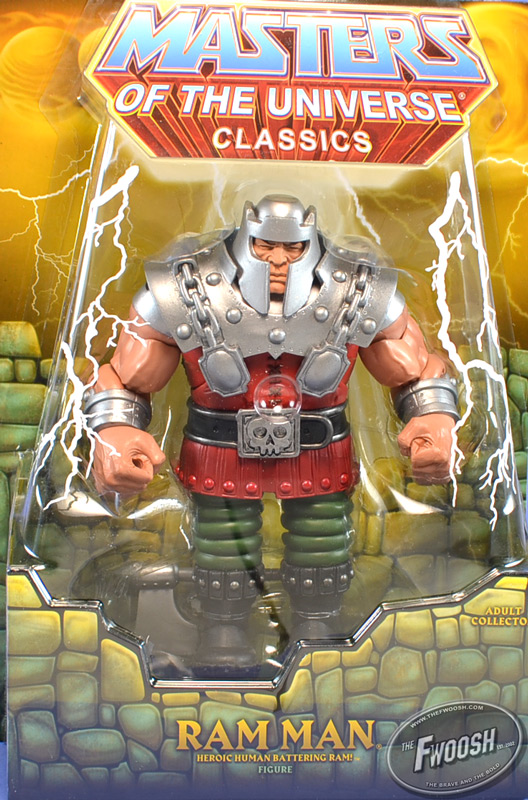 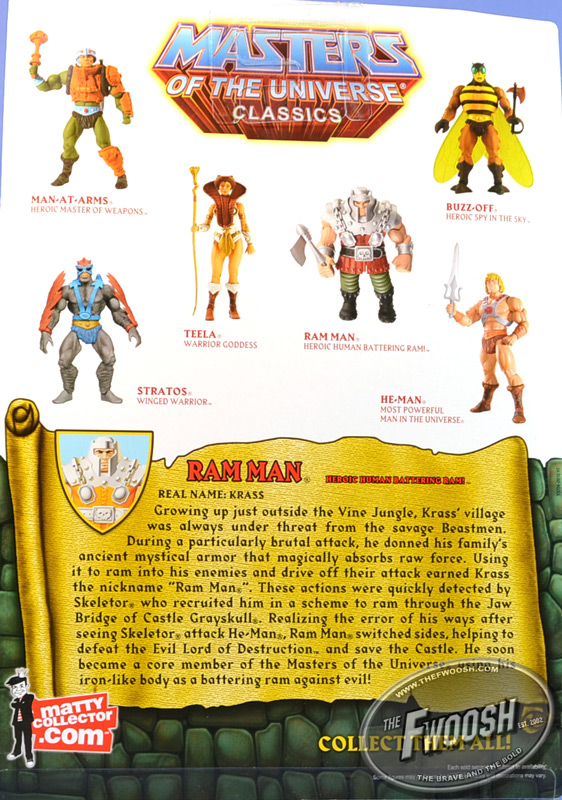 As long as the figure would make it through production cleanly, I think most of the fans were won over by Rammy when he was in his prototype form at SDCC last summer. He has the style of the vintage card back, the colors of the original toy, and even a 200x-inspired alternate head to boot. Plus, since he is 100% new in terms of tooling, the Four Horsemen were able to do him correctly and no standard MOTUC packaging could hold his wide girth. I realize that getting an accurate judgement on scale has been difficult thus far, but I can confirm that, despite being as wide as a bus, Ram Man is not any taller than any other standard-sized MOTUC figure. Personally, that is a relief because that has always been my preference, but if you are a fan of the really short and stubby FilMation version, or the hulking 200x interpretation, he is going to be too tall or too short, respectively. I do believe that the final size will be popular with most collectors, though, since he lines up comparatively well with his vintage counterpart. 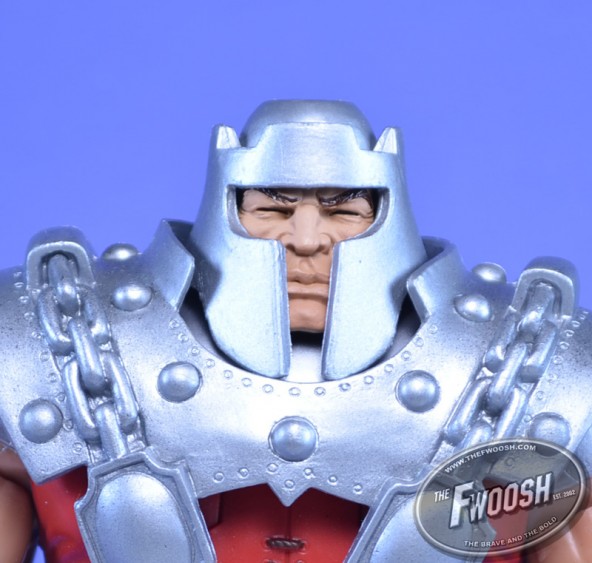 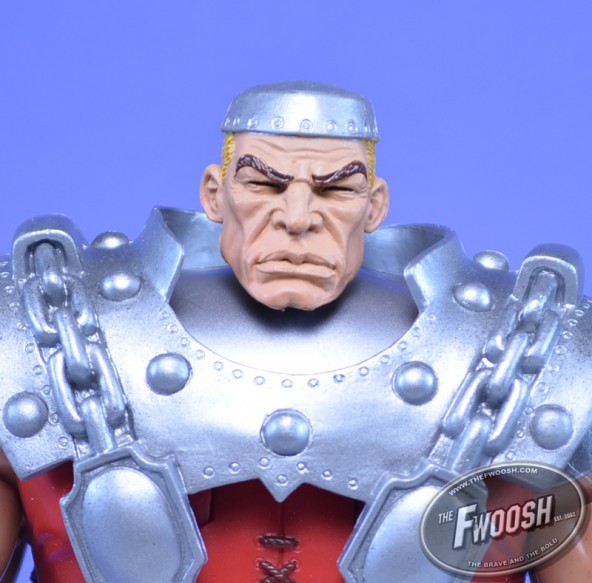 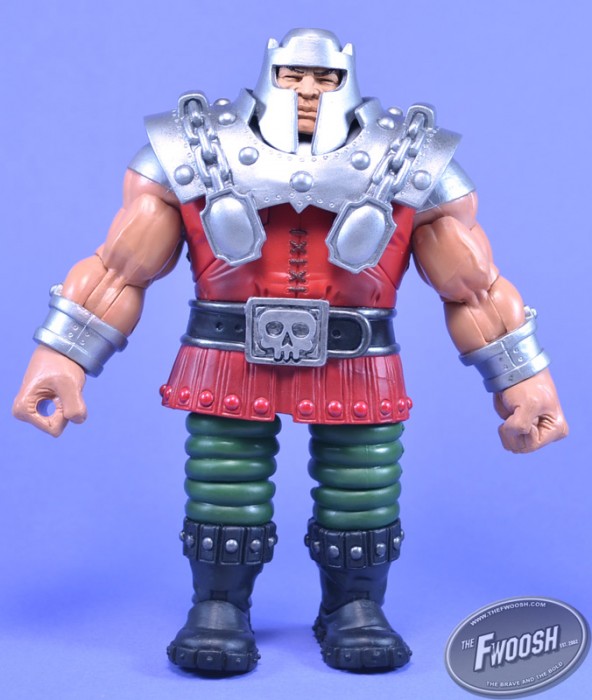 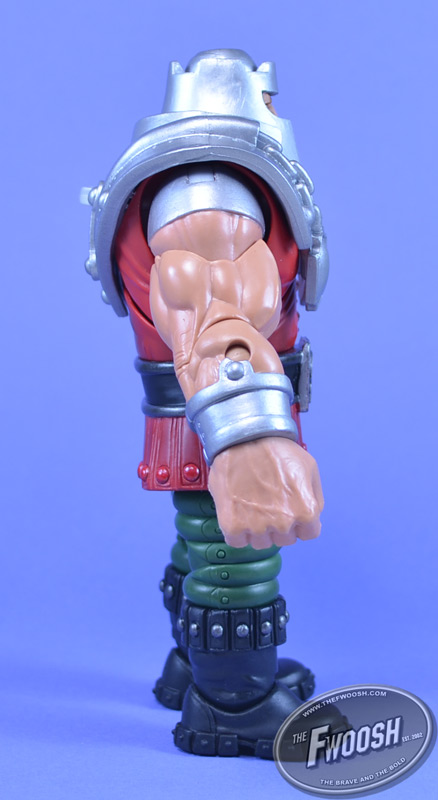 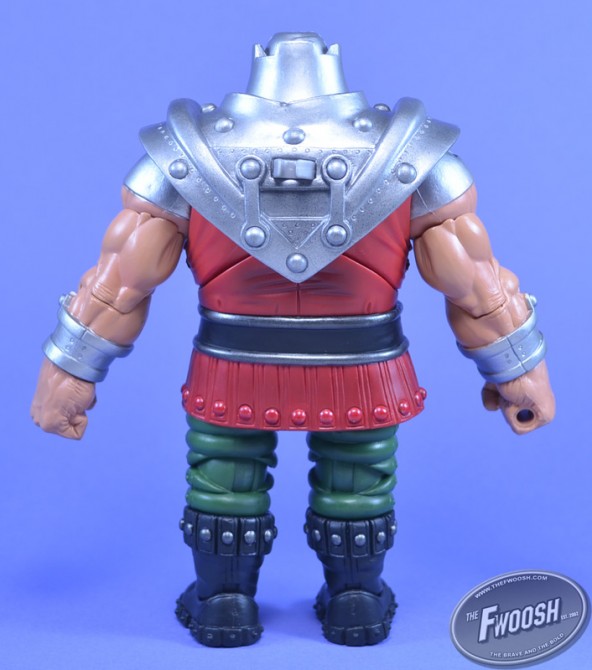 I don’t have a lot of nostalgia around the original figure itself, since I never had my own. He was one of the very few He-Man figures never to grace my toy box, but I know I was very jealous of my cousin’s Ram Man figure, and he was always nice enough to let me play with the figure whenever we would have holidays at our grandparents’ house. Even as a kid, it kind of felt like the actual Ram Man figure didn’t completely belong with the rest of my MOTU guys, even though he still felt very “MOTU” in concept and spirit. I don’t think I am completely alone in feeling that, and even with 5-year-old sensibilities, for the longest time (until I saw Rammy in a FilMation episode) I was not complete convinced he was a MOTU figure at all and perhaps my cousin was having a good joke at my expense. So, even almost tailored to young reason, Classics continues to outdo the original line in giving us a Ram Man that feels 100% like a Classics figure. I cannot describe it, but even though he is a 100% unique figure like his vintage counterpart, he slides into the line seamlessly. 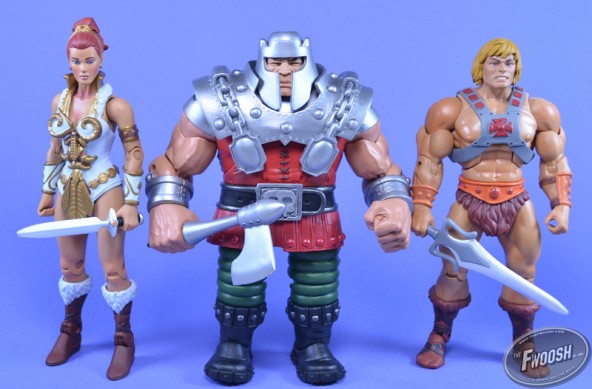 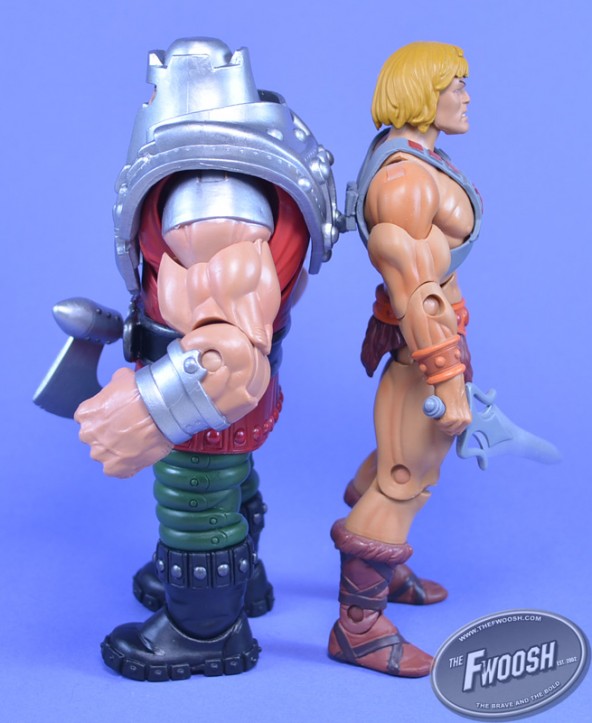 As I mentioned, and from what I expect is the tooling costs and amount of plastic needed to deliver this figure correctly, Ram Man is the $30.00 Q1 figure for 2013, so I think a bit more attention is going to be given to the overall execution of this more expensive figure in an already premium line. MOTU fans are some of the most discriminating fans anyhow, so anything that might come through production in less than satisfactory fashion will be highly scrutinized. Well, from an engineering, construction, and paint standpoint, I cannot really find any substantial bones to pick.

Ram Man is a SOLID hunk of plastic and all of his joints are nice and tight an hold poses well. This point is especially important for a figure with such heavy limbs, but his arms are strong and his knees and ankles are tight. Speaking of the knees, they are beautifully invisible when hidden beneath the coils of his extended legs. They are actually partial ball joints so you get the forward and backward hinge, as well as a full 360-degree twist. He does have the standard MOTUC abdominal crunch and it does allow for some movement, but you actually get more range arching the back, rather than crunching to the front. His shoulder pads and helmet are made of a softer plastic so that, for the most part, posing is not inhibited. 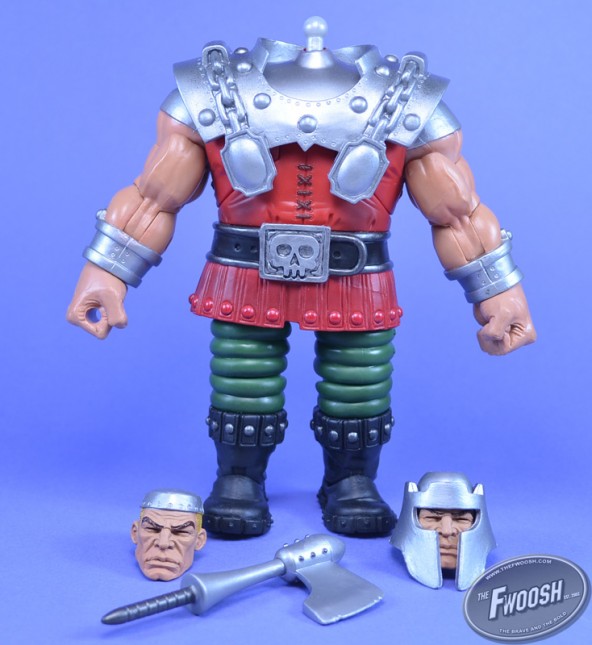 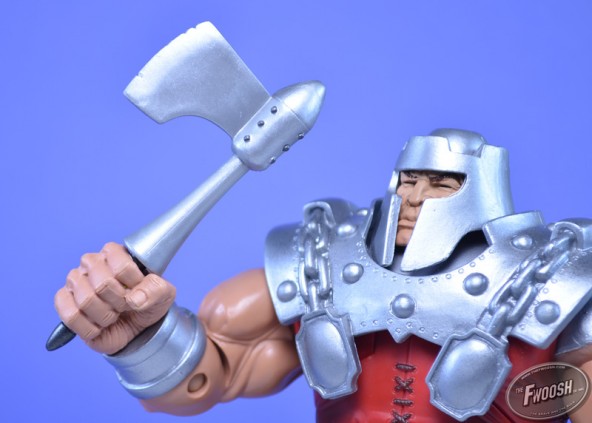 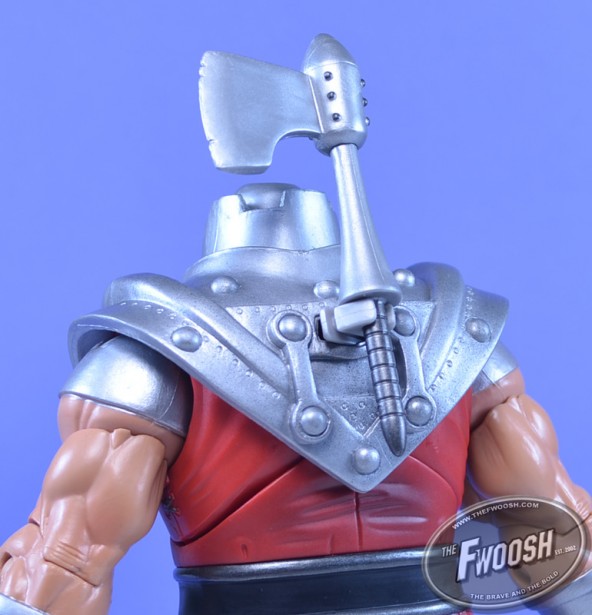 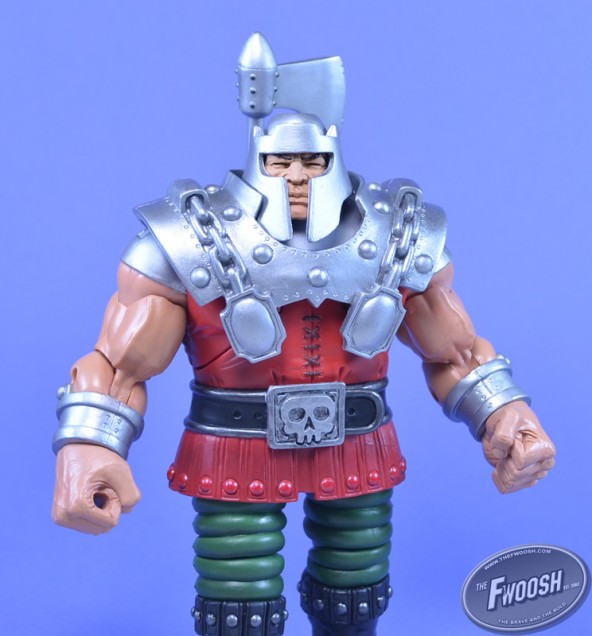 Speaking of which, I think that the “skirt” portion of his outfit has caused a bit of lingering concern due to the fact that it could greatly inhibit the posability of the legs on the very first Ram Man figure to actually be able to move. Well, while there are no slits in the skirt, it is made of a soft and rubbery plastic so you can get some good posing from the legs. I have taken some pictures to help illustrate this, so hopefully you can see for yourself. Additionally, Ram Man actually has great balance (probably due to those giant, skull-treaded boots) so he can hold a variety of action poses even some of the standard figures cannot achieve. I do have to say, though, if there was any design nit I would have to pick,  I think his legs are a little too skinny for his upper frame. I mean, the power of all those “rams” comes from those limbs and I suppose I was expecting nothing less than tree trunks. They are not bird legs or anything, but I think I would have liked a little more girth to them. Your own opinion is sure to vary, though. 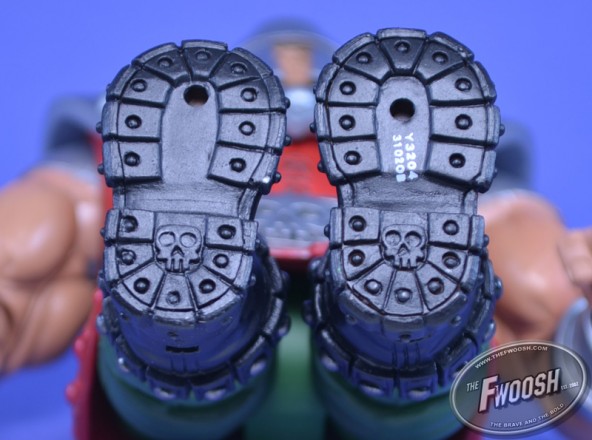 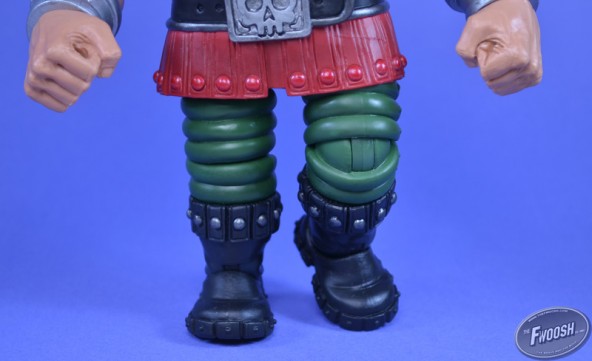 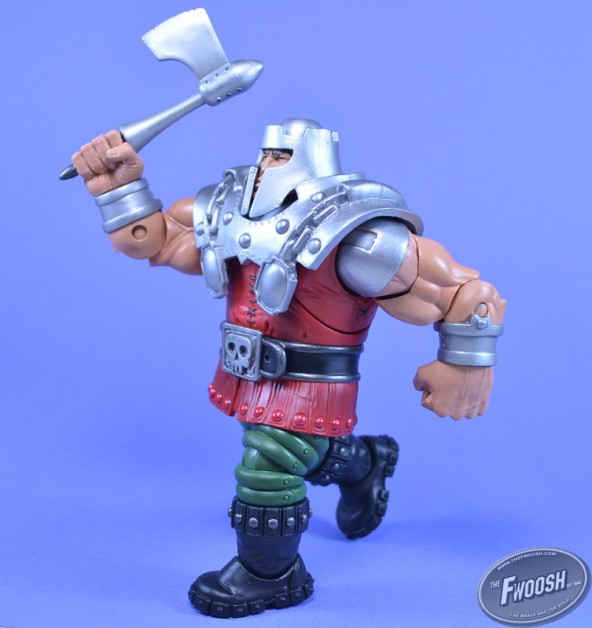 Even though Ram Man’s body is his primary weapon, he does come with his trusty short axe that he can use to hew his rammed victims into a bloody pulp, or just whittle a new fishing pole. You know, whatever works for you. The axe is very faithful to the vintage and is made of a nice rigid plastic so it won’t be doing any bending a la Man-at-Arms’ mace. His right fist is drilled so that he can hold the axe, but there is also a clip on the back his shoulder harness to store it when it’s not in use. I personally think the axe looks a little ridiculous in the clip, so Krass here is just going to have to buck up and hold fast to his axe. 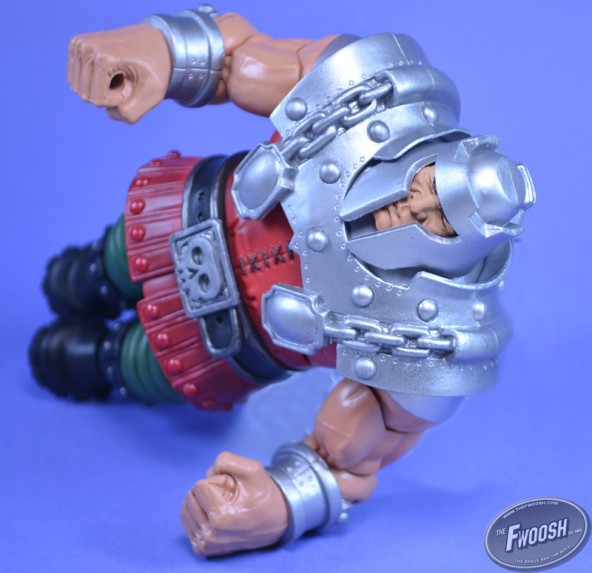 His second accessory is actually an interchangeable helmetless head. It is modeled in spirit after the MYP cartoon (when he was shown without the giant helmet, with just a small metal skull cap) but the face, just like the helmeted version, is based completely off of the vintage card back look. Rammy has a tough mug and is his squinting expression is the same in both heads, so if you are a fan of that, you will love this. I think it gives a TON of personality to the figure and I think it was a great choice over the rather blank expression of the vintage figure. I personally do not have any real use for the alternate head as I cannot imagine displaying my figure without his helmet rig, but it is nice to have the option. Plus, now we can all know that Rammy, despite his gruff exterior, has lovely golden locks, even if they are closely shorn to his head. 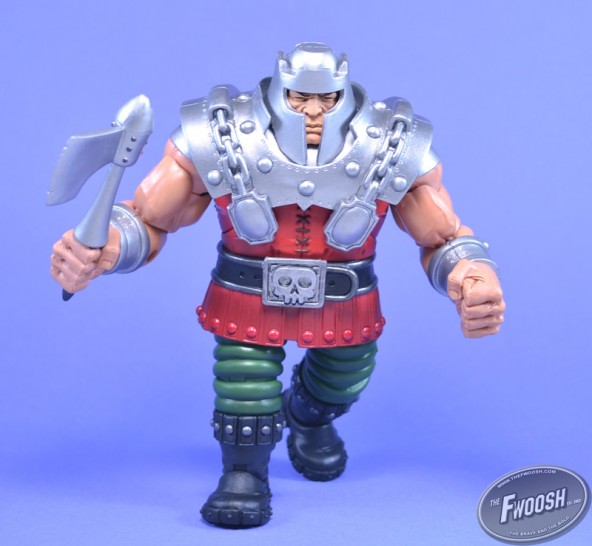 Overall, I think that January is going to be a fantastic way to start off MOTUC with Ram Man. I am willing to bet most  fans are going to over the moon for this figure and for a big chunk of plastic, he has a ton of personality. All of the vintage details, from the harness to the skull belt buckle are heightened in this figure, while nods to the vintage card back, like in his face, add the next level to the figure. I think that Classics is giving me the Ram Man I always wanted — a guy that is not a moron (I HATE that characterization) and wide, not tall. Ram Man has been with us through the vintage and 200x lines, the FilMation and MYP cartoons, but I think this version is the best so far, perhaps even surpassing the much loved mini-comics look. In just a little over a month you will get a chance to see for yourself, but I am a believer in Ram Man, so much so that I would love to see his cross-sell color scheme of red and yellow somewhere down the line. I would suggest being on Matty Collector right on time on January 15th — this figure is not going last long. 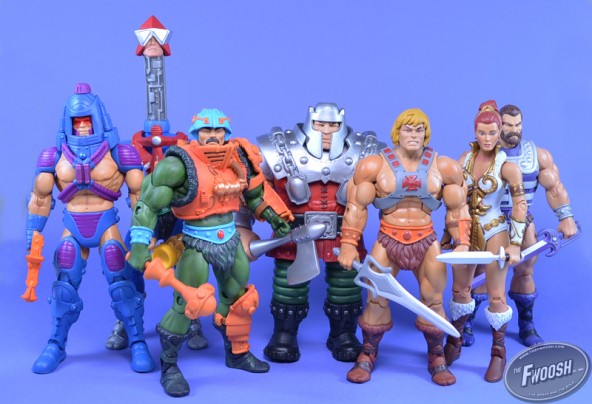 *Thanks for reading and thanks to Toy Guru and crew for making this Look possible. Stay tuned, lots more MOTU and DC is coming your way soon!