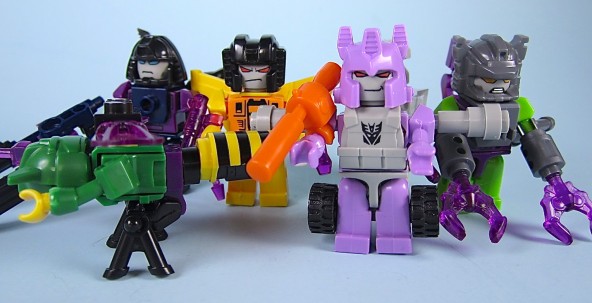 Hasbro got into the “Lego-compatible” toy business last year with the launch of their Transformers Kre-O line, a Lego-like series of toys that function identically to Legos: you get a bajillion bricks and pieces and the object is to construct something that looks like the images displayed on the box, or you can make whatever you like because, like Legos, this type of toy offers a seemingly bottomless pit of versatility, and it’s really your own imagination that sets the boundaries.

Packed into the larger Kre-O sets have been these awesome two-inch-tall mini-figures, or “Kreons.” They’re the closest thing to Transformers Minimates that we’ll likely ever get, and despite being rather diminutive and limited in purpose, these little guys have proven to be the stars of the line for many fans. And it’s here where Hasbro has successfully taken a que from Lego–Lego’s blind-bagged mini-figures have been wildly popular, selling out series after series, and it seems as though Hasbro has mimicked this approach almost exactly, but with one twist.

These blind-bagged Kerons can be taken apart and rearranged into their signature alt-modes. Well, at least an approximation of their alt-modes in some cases. There are six Kreons in total in this first wave, a few very popular characters and a few rather obscure ones, making this initial offering a true “assortment.”

This is what the blind bags look like. They can be found hanging from pegs or displayed in a tray on the shelf in the Lego aisle at Toys R Us for $2.99 each, but I’m not sure about their availability elsewhere at the moment. While these are “blind” in nature, the code at the bottom of each bag indicates which Kreon is contained within. The breakdown looks like this: 0=Crankstart, 1=Scorponok, 2=Waspinator, 7=Spinster, 8=Galvatron, 9=Sunstorm. 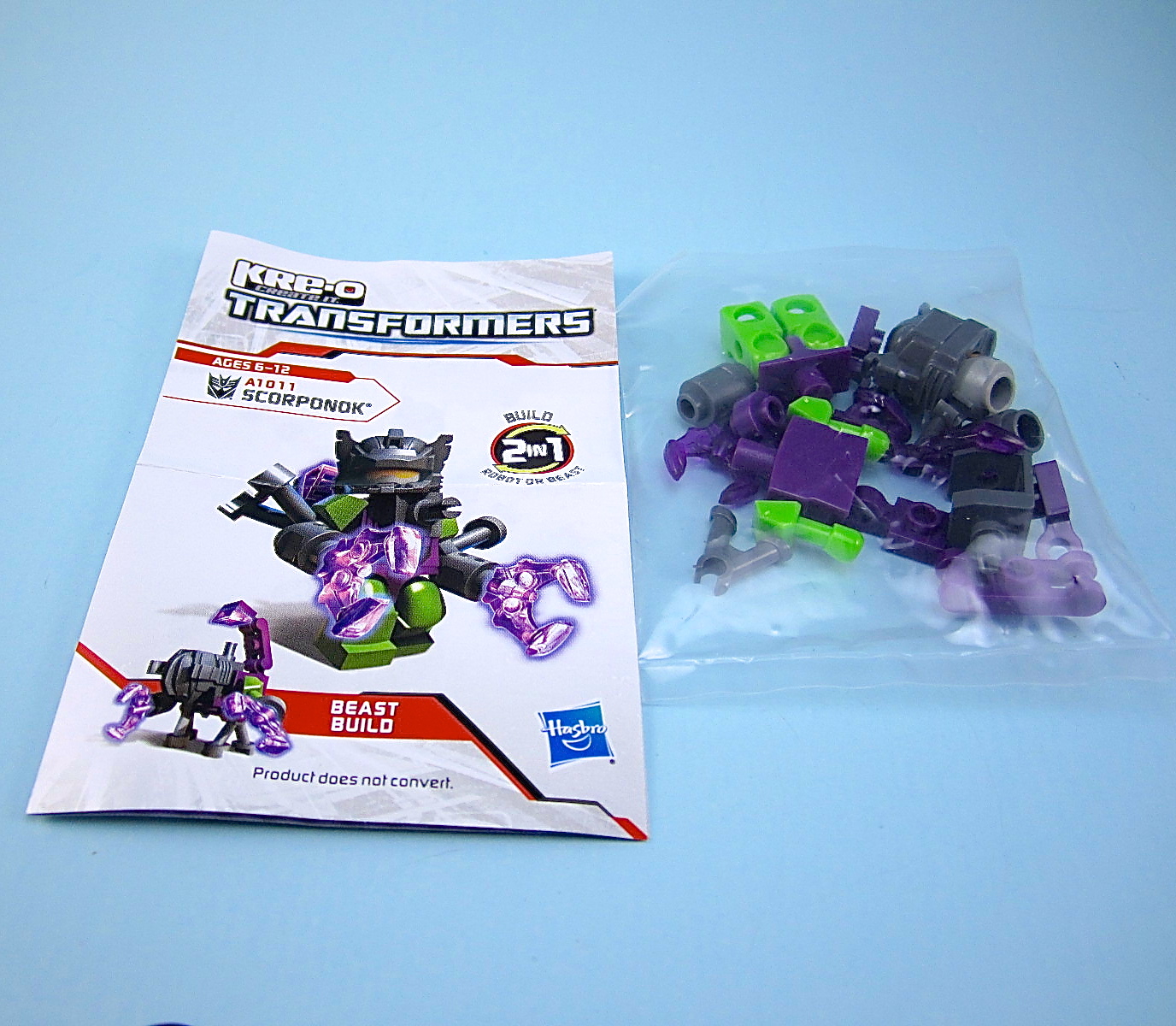 Inside each blind bag is a set of instructions and another bag filled with all the parts and pieces you’ll need to build your figure. 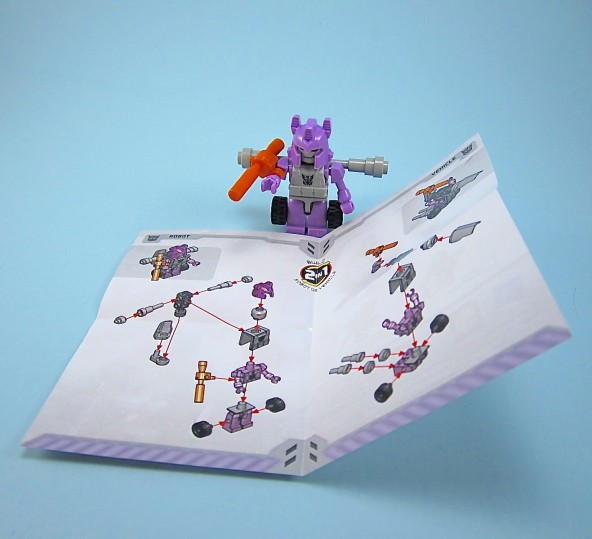 The instructions include details for building both modes. They’re very thorough and relatively easy to follow.

First up is the mighty Galvatron, star of 1986’s Transformers the Movie. The gray and purple (lavender?) colors, along with the giant, bright orange cannon, make him unmistakable for any other character. I love the smirk on his face–it’s perfectly arrogant and confident and capture’s the characters personality quite well. Seeing Galvatron rendered as such a small and–let’s face it–cute figure is worth the price of admission alone. What’s also cool about this Galvatron is that every single piece is used in both modes. Nothing is left over to be stored away or potentially lost.

Unfortunately, his alt mode isn’t as successful in execution as his bot mode. This… thing… bears little resemblance to any alt-mode for Galvatron we’ve ever seen and it really does feel a bit thrown together. I mean, what is it? A two-wheeled tank? A wheelbarrow with a cannon? Are there two cannons? What’s that big, gray shovel-looking thing on the front? I should also note that this mode will not stay upright by itself without the aid of Museum Putty or something similar. I appreciate the thought here, but this thing is a mess. He’ll stay in bot mode forever.

Fan-favorite Waspinator’s alt-mode is much more successfully rendered here and it actually looks like the thing it’s supposed to be–a wasp! Like Galvatron, it’s the colors here that really make the figure. From the yellow and black bee-butt to the translucent purple wasp wings, this little guy is the star of the set, I think.

Waspy’s bot mode is solid, but a bit boring. It’s just too much green with many of the sharp details of his wasp mode lost. Unlike Galvatron, Waspinator does not make use of all his parts in either mode, so the black and yellow bee-butt has no place in his bot mode, and the purple wings are lost on his back. It definitely looks like Waspinator, mainly due to the paint apps on his face, but when the green helmet (which is a repaint of Jazz’s helmet) is placed firmly in place, much of the paint apps on his face are hidden. The bot mode is a bit blah overall, so I’ll be keeping this guy in his beast mode.

Sunstorm seems to be getting a lot of love lately for a character who appeared in the original cartoon for just a few seconds. He’s getting the Masterpiece treatment from Takara this year as well as his own Kreon figure here from Hasbro. He looks to be a repaint of the Starscream Kreon from last summer (I can’t confirm since I don’t own it), and like the other figures in this series, he has an alt mode that sort of looks like what it’s supposed to be. The bot-mode does a nice job of capturing Sunstorm by representing his signature colors: orange, yellow, and white. He’s definitely the brightest of the seekers color-palette wise, and Hasbro fully embraces that here. The Seekers arguably have the most recognizable design of any Transformers character, and this little guy does a decent job of capturing that classic look.

Sunstorm’s alt mode does sort of look like a jet. It’s a better execution than Galvatron, but not as strong as Waspinator. It’s good enough that I can at least tell what it’s supposed to be, but it’s not good enough to be truly convincing. I think it’s the lack of a cockpit that keeps it from really resembling a jet. It’s enough, though. But this figure, like Galvatron, will remain in bot mode.

Scorponok, like Waspinator, does a good job of pulling off both modes well. This Scorponok looks to be based on the G1 design rather than the Beast Wars character of the same name, and while it could easily be argued that this really doesn’t look much like a scorpion, the original G1 Scorponok really didn’t either. Apart from the claws and the “stinger,” nothing here really suggests “scorpion,” but that’s OK because, like I said, it’s for that reason that it successfully evokes the G1 design. Scorponok is one of the stronger offerings so far and makes me eager to see what’s coming. And even though this is not the Beast Wars character, I like that it still says “Beast Build” on the instructions. It’s a nice tip of the hat to Beast Wars and it makes me hopeful that we’ll see more from that awesome series here. 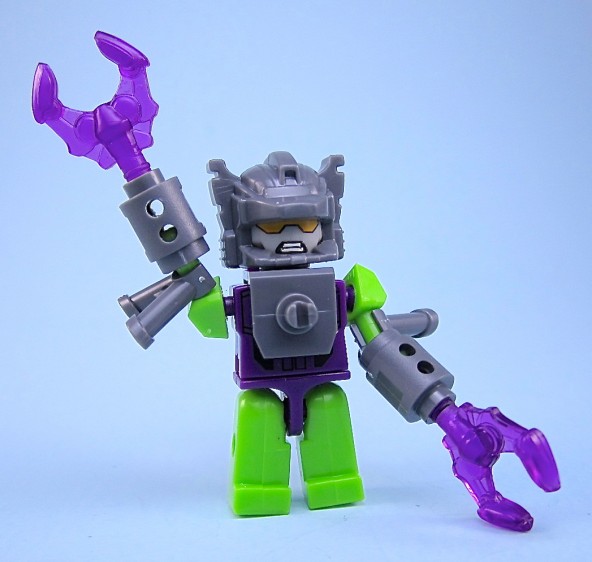 Scorponok’s bot mode looks enough like the original G1 character to pass. Again, it’s mainly the colors here that do the job, but the giant claws for hands don’t hurt either. I really can’t decide which mode I prefer for this guy, but I’ll probably keep him in beast mode to keep Waspinator company.

Spinister is a new character to me. When I first saw pics, I immediately assumed it was supposed to be Vortex, but, to my surprise, it wasn’t. I actually had to look up Spinister because I had never heard of him before, and it turns out he’s a G1 character who was introduced after I quit collecting when I was a kid. He was also part of a recent Botcon exclusive set, so like Sunstorm, he’s an obscure character getting some attention this year. From what I can tell this Kreon rendering isn’t as true to the original as it could be. Meaning, it’s just not garish enough. Don’t get me wrong, I love his looks and the color scheme is really sharp, but the original was much more obnoxious. His helmet bothers me, though–it looks too much like the helmets Apollo and Starbuck wore in the original Battlestar Galactica. In fact, that’s all I really see when I look at him.

His helicopter mode looks more like a helicopter than Sunstorm looks like a jet, so I guess that’s something right there. I definitely prefer his bot mode, so that’s how he’ll stay, however.

Last up is Crankstart. Like Spinister, when I first saw pictures I immediately assumed he was a different character, in his case Drag Strip. He’s a relatively new character having been introduced in 2010 as an off-screen character in the Revenge of the Fallen line. Crankstart’s alt mode is supposed to be a dune buggy, and I guess it does sort of look like one. But had I not known that going in, I may not have come to that conclusion looking at the result. He doesn’t function very well as a vehicle, and, like a few of the others, this alt mode feels a little tossed together at the last minute.

Ah! Crankstart’s bot mode is so much better! A much more solid and stable-looking figure. There’s a lot about him that echoes the look of some of the classic G1 mini bots. He’s just unremarkable enough to be charming. And I’m a sucker for the gray and yellow color scheme.

After this initial offering, I really think there’s some potential here and I can’t wait to see what’s coming (more Beast Wars, Hasbro!). I’ve never been a Lego guy (too impatient), but I did enjoy building these little guys. So maybe these will be gateway figures for non-Lego folk like me. Maybe. Give me a G1 Ark set and we’ll talk.