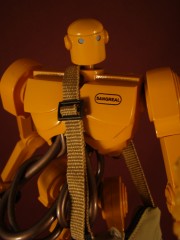 Back in January ThreeA Toys offered up 1/12, 6-inch versions of their PopBot action figure. PopBot was originally a 1/6 release, but then last summer at the 2011 San Diego Comic Con the first portable version was released. And then in January a 4-pack was sold on Bambaland along with a few singles. I manged to pick up the one called “Sangreal.”

This is a PopBot with two hands and two big freaking revolvers. Sangreal is painted in a gloss burnt orange color, giving him a kind of C-3PO feel. There is no weathering and the ‘bot looks fresh out of the factory line, unlike the other versions that are covered in drybrushing and washes to make them look old and dirty. But Sangreal looks squeaky new, which makes him different as a ThreeA offering. 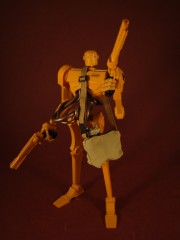 He’s packed to the hilt with articulation: hinged toes, hinged ankles, ball ankles, hinged knees, ball hips, ball waist, ball chest, ball neck, double ball shoulders, bicep swivel, hinged elbows, ball wrists, and individually articulated fingers. For the most part, the articulation is great and allows for many possibilities for posing, but it isn’t perfect. The hinged toes on my figure are pretty worthless and I don’t get much out of them. The hinged ankles were loose and got looser, so I had to use the superglue-in-the-joint-to-tighten-them solution. The ball ankles also loosened and needed a superglue fix to tighten them up. The double ball shoulders don’t have much in the way of lateral movement, but it’s no great loss outside of some super dynamic posing. And the fingers might give some people fits as they aren’t super tight, making holding the revolvers tricky. For the articulation junkies and the quality control freaks, these loose joints will be a nightmare. For the casual collector or those the play with their toys, not such a problem. 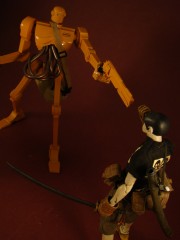 The accessories include two big ass revolvers, a shoulder bag, and a Kitty. Kitty, or Dothan, is kinda the main character of PopBot (I think) and is protected by PopBot since Dothan is a bad kitty. The cat is ok, nothing to write home to mom about, and the vinyl/designer toy collector probably enjoys him more than I do.

The revolvers are amazing. Huge, Big, Loud (I imagine). These things are great and the cylinder revolves. Perfect. Love it.

The sculpt is great. Ashley Wood delivers another classic bot, something out of a 1940s cartoon, maybe something from Fleischer. ThreeA’s strongest bots are those that carry this old fashioned look and Sangreal delivers. My only complaints are the cables coming out of the chest, it is the one design element that leaves me going “Wha?” But it seems to be the norm with most of Ashley Wood’s works. 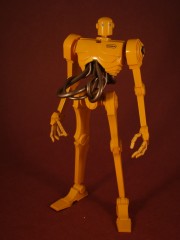 All in all, this is a great toy. It needs a little work, but it’s definitely worth the purchase if you can find it for a reasonable price on the aftermarket.

As usual you can discuss this figure further on the fwoosh forums: http://thefwoosh.com/forum/viewtopic.php?f=91&t=60364.