The reviews continue with the final three figures in this BAFless wave. There’s one figure in particular I’ve been waiting a long time for, and in hindsight, I’m glad Hasbro waited this long. 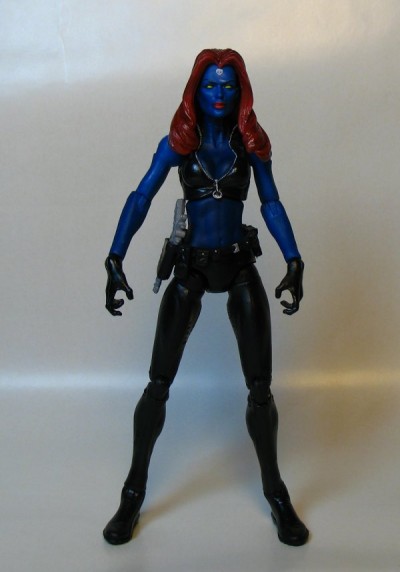 First up, though, is Mystique. Amazingly, this is only the second Marvel Legends figure she’s received. The last was waaay back in series 10, the Toybiz years, and that one was horrible. This one has that one beat easily, but she still has some problems.

The largest problem is her head. Since this wave was a quickly pumped out wave, there was apparently no money or time or whatever to create a new head for her, so she reuses the Madame Hydra head from the previous wave. As most everyone knows, that head was unbelievably horrible. She was not only hit with the ugly stick, but a tornado ripped the tree that the ugly stick came from out of the ground and sent it hurtling into her at about 100 miles per hour. This time around, a combination of the blue skin and less mold problems resulted in a more aesthetically appealing head. But since it’s not a head tailor-made for Mystique, the skull is only painted on, which comes across as rather cheap looking.

But the positive reuse trade-off is that she uses the Black Widow torso with a partially unzipped top, which works perfectly for this version of her costume and would look great for the Black Cat. Although she does have scrawny thighs, I’ve never been too bothered by the physique of this body, but the ankles could use some improvement; her posing is limited by severe balance problems.

She’s one of two very gun-heavy characters in this wave. There’s some reuse there between her and Punisher, but there are some new weapons as well, and it’s nice to have a couple different items added to the arsenal. 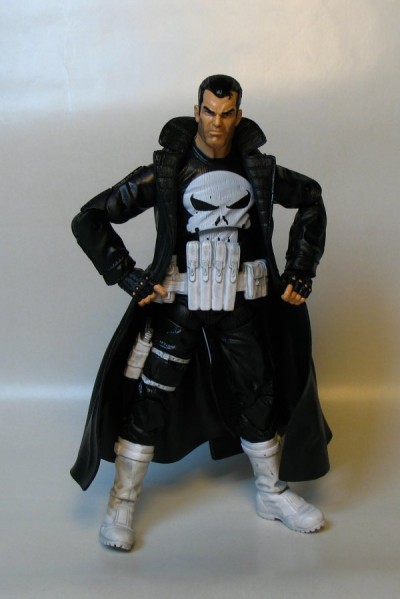 Speaking of Punisher, this wave brings yet another version of the mob’s worst enemy, and while I didn’t think I needed another Punisher, my mind was changed once I had him in hand. I’ve always liked the visual of the Punisher in a long, black jacket with the white skull drowning in all that black, so I like that we’re finally getting a good version of that particular vision of Frank. The downside of jacketed figures is that it’s difficult to get their arms to rest at their sides easily. It does give him a constant “ready to draw” look, so it’s not horrible, but it does hinder his arm articulation a bit.

Other than that, his articulation is pretty good. After being spoiled by the newer ankles and hips it’s bittersweet to backslide into the 45-degree hips and older ankles, but, overall, his articulation works well.

I really like the head on this figure. While the series 4 ToyBiz Punisher had a nicely sculpted head also, I may like this one a little more. I definitely like it more than the Face Off or the previous Hasbro version. It’s very evocative and “Frankish,” with a nicely painted stubble. He looks like he’s been hunting criminals in the pouring rain for 24 hours straight, running on adrenaline and anger.

Like Mystique, he comes with plenty of guns, perfect for two-handed, villain-blasting action. 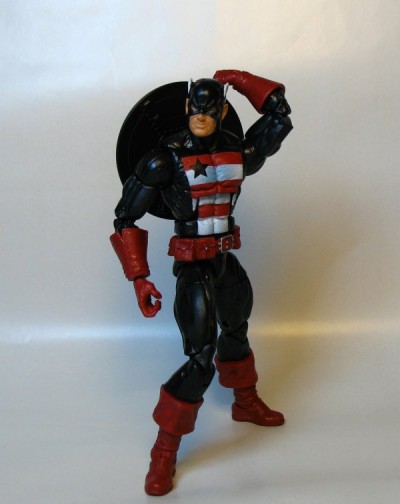 USAgent is the final figure of the wave to be reviewed, and one that brings about a chorus of “finally!” across the land. I’m glad it’s taken this long to get him because he benefits from the new bodywork that has been done. He’s all Bucky Cap with a new head and glove cuffs. Because of this, many think he’s too short because he’s the same height as Bucky. Well, he’s over six inches tall, which, using complicated toy math, translates to over six feet tall, which is well within range for both USAgent and Captain America. I’m a bit of a scale Nazi, and it doesn’t bother me at all to have Bucky and USAgent the same height.

This figure serves a dual purpose for any fan of the Gruenwald Cap issues. He can either be USAgent, or he can be Steve Rogers as “The Captain,” on his own, teaming up with D-Man for adventures off the grid.

Which reminds me: now we need a D-man. You know what would work pretty well for him? That new Hyperion body. Hint, Hasbro. Hint hint.

While there are issues here and there with some of the other figures, USAgent is the winner of the wave for me. He came with a (newly chromed) gun and a knife, but since he has a new belt lacking the holsters needed for them, they’re extras to be handed off to someone else. He doesn’t really need them anyway.