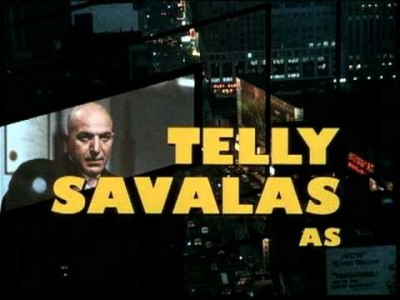 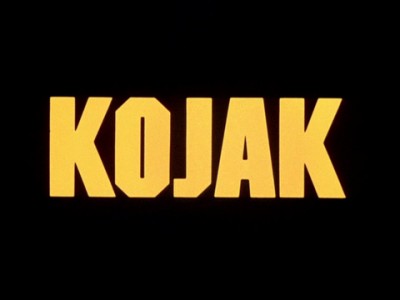 OK, if for some weird reason you hadn’t been born yet, KOJAK was a TV show starring the guy who played Blofeld in that one James Bond movie your girlfriend said was too boring to watch. You may also know him as the brutal Cossack officer Captain Kazan in the seminal public-domain favorite HORROR EXPRESS or in his career-defining role as Magmar in GO-BOTS: BATTLE OF THE ROCK LORDS. OK, OK, I’m just giving Telly the business. Actually, the man was the consummate entertainer! Mr. Savalas had a 40+ year career in Hollywood, was a Golden Globe and Emmy Award winner, an Academy-award nominee, and starred in one of the most popular television shows of its time. He also came in assorted flavors. 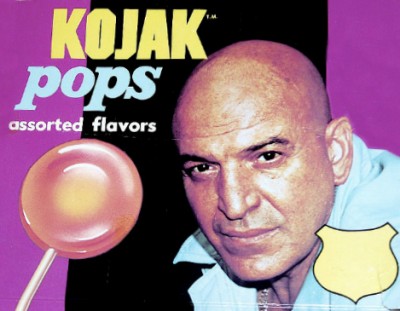 KOJAK was a bit of a phenomenon. Now, before you laugh… What? Too late? Oh, you jaded kids with your iPhones and lolcats and haircuts. Why, when I was your age all we needed to have fun was a juice box and an action figure of a Greek policeman! Hey, don’t you laugh at me! Stay off my lawn! And I’m keepin’ this ball! Come back here! I know your parents…! 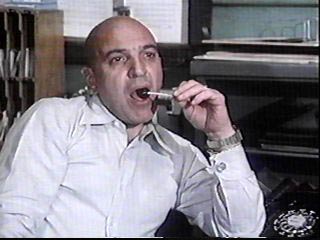 Kojak was a bit of a phenomena. With his distinctive look, iconic catchphrase and omnipresent lollipop, the TV detective managed to catch the tailwind of the ’70s cultural zeitgeist. Remember DRAGNET? Well, forget it. Joe Friday was out, Theodopolous Kapsalis Kojak was in. Greek, street-smart, and maybe a bit of a criminal himself once, Kojak was the antithesis of the TV tough cop. Rarely pulling his gun, he was just enough of a wild card to appear anti-establishment, the “cool” cop you might talk to instead of run from. Like all cultural icons worth his salt, his image was ubiquitous, appearing on trading cards, on t-shirts, and in your parents’ LP collection. 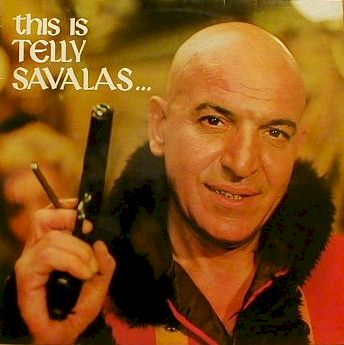 But you obviously didn’t come here for a social anthropology class–that’s not for another 45 minutes. Lets get right to the figure and its “particulars”! The Excel Toy Corporation decided to get in on the “Kojaction,” obtaining the license to produce action figures and playsets. They followed the industry standard of the time, releasing an 8″ figure in the “Mego” style–that is to say, a generic-jointed plastic body accessorized with a unique head sculpt and fabric clothing. The packaging is nifty, if a little undersized. I mean, the blister can barely accommodate the figure. As you can see, Theo comes with all the essentials: For a start, not just anyone can pull off wearing a large blue plastic hat; you don’t just give one to Bill Bixby or John Ritter–it takes Savalas to make piece of crap like that look good. He also comes with a gun for shooting your other figures, plus his trademark Tootsie-Pops, and a cigar. Now, you can bet most parents had a good laugh when they bought this guy for little Johnny–no one flew off the handle and sued the toy manufacturer for promoting smoking to children. It was understood that smoking was bad for kids, and the inclusion of a brown plastic wedge of plastic that looked more like dog poo than a cigar was just as likely to make a child take up smoking as Kojak’s hairless dome would make them want to shave their heads. 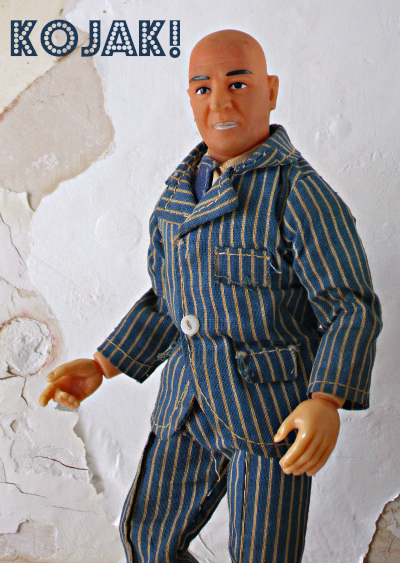 The back of the packaging breaks it down, ’70s-style: 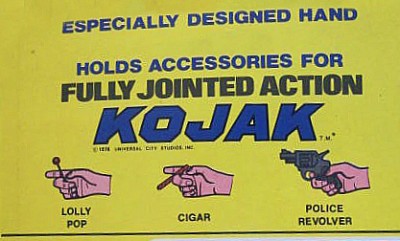 You know, kid, in case you didn’t know how to hold a cigar.

So the first thing you will note once the figure is out of the packaging is his “realistic action.” This concept will be illustrated by Kojak getting your other action figures off “the hard stuff,” talking down potential suicides, and beating up any pimps or pushers in the general vicinity. So, after all that I gotta say… he’s a bit disappointing. 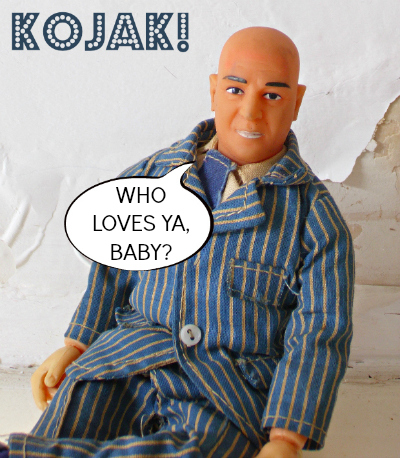 See, with a character like this, you’ve obviously gotta nail the head sculpt. The figure succeeds or fails based on its resemblance to the character it portrays. Now, Telly Savalas has rather distinctive facial features–being a full-blooded Greek and all– and he wasn’t just some generic bald white guy, yet that’s exactly what this figure gives us. More Daddy Warbucks than Lollipop Cop, the toy in question effortlessly eradicates any trace of ethnicity from the Kojak identity. Instead of Savalas’s sharp, angular features, we get a potato with eyes. Yes, the sculptor made the figure bald and gave him a big nose, but it’s the proportions that are all wrong. 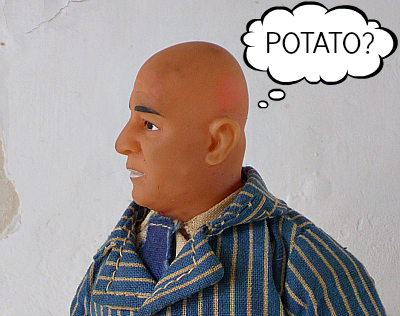 The lack of definition and distorted caricature-style features create an oddly ageless face. Think Adult Baby–rit eminds me of this guy… 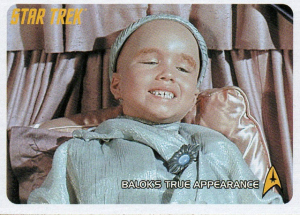 What a kid is supposed to do with this admittedly good-natured bald man I have no idea, although I suppose he’d make a decent stand-in for Jojo Crako, if someone wanted to play A PIECE OF THE ACTION with their Star Trek Megos. In the end, the Kojak figure looks about as much like the actor who portrayed him as Mego’s version of Superman looked like his namesake–that is to say, not very much. As a child, it was hard to reconcile the heroic red-and-blue hero of comic books and cartoons with the freakish, smirking sociopath Mego saw fit to place in his costume. 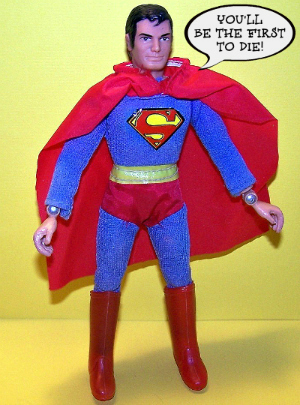 Brrr! Someone burn that thing.

Theo is a pretty sharp dresser, all in all. The jacket is nice, if a bit over large; underneath it he’s sportin’ a dickie with a wide scrap of fabric attached to it which serves as a tie. The cuffed pants are look good–they’re realistically baggy and hang well on the figure. Sadly, his hat is probably buried in a landfill somewhere… He’s sportin’ some sweet kicks as well, but the real surprise lies beneath. 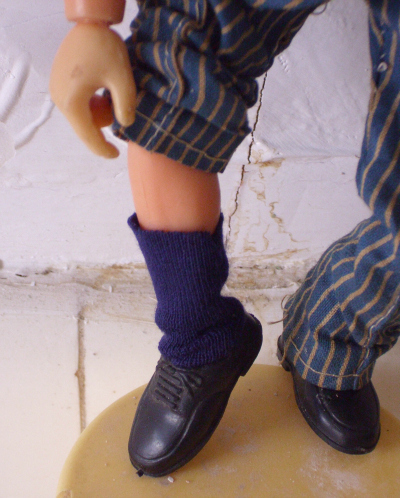 Even action figures of billionaires like Bruce Wayne don’t come with socks, baby–Kojak is the complete package!

Anyway, in spite of its obvious flaws, this action figure still fit the (admittedly minimal) requirements for a media tie-in of the time. It’s enough like Kojak that it squeaked by, and, I have to admit, in these dark days when Batman figures don’t even come with a batarang, the character-specific accessories are a big plus. Sadly, these were the first things kids lost, making Theo here very hard (and pricey) to complete loose. 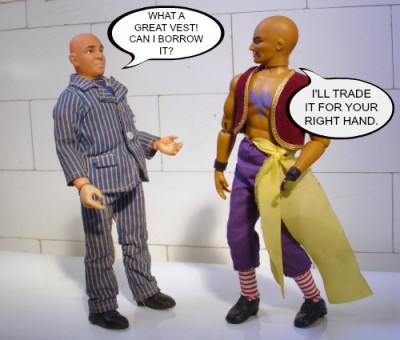 Although fellow Detectives Crocker & Stavros never received figures, we did get Kojak in both pinstripe and dark blue suits, as well as a mail-away police headquarters set. I could totally see Kojak busting my Fonzie figure and dragging him downtown for questioning.

Time has not been kind to my Kojak figure. Aside from play-wear, loss of accessories, and general griminess, he also suffers the fate of many a Mego-style figure, that being the inner elastic band that once held him together is now slack with age. Oh, sure, you laugh about it now–but wait ’til it happens to you… 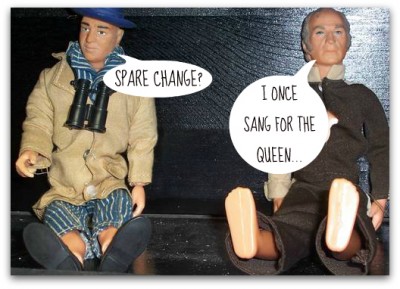 In the end, the figure’s fate is as grim and inevitable as our own. Having had his day in the sun, Kojak turns in his badge and Player’s Club Card, shuffling off into the twilight obscurity of the Bronze Age of toys, his last words an unanswered question in the settling dust. 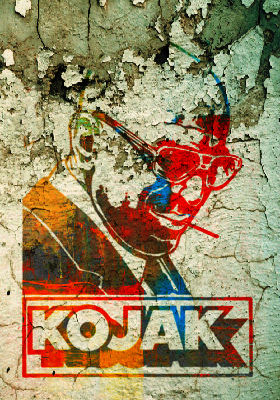 Thanks for readin’ folks! Look for more from the Ant Hill soon!