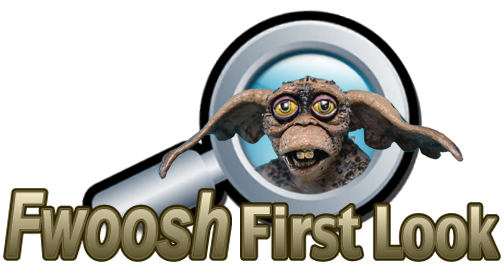 Okay, okay, I will be the first to admit that I am probably a little late in getting this posted, but I really did just get my brand-new set of NECA’s Gremlins series 2. Honest. I have been really busy and I finally got around to ordering my set earlier this week. The good news is that shipping was super fast, so I took some pictures and I have a few thoughts to share about the long-time-coming Lenny, Phantom and Brown Gremlins. Man! It seems like forever since our Look at Series 1, yeah? I have made no secret that, while I adore the Mogwai figures, the Gremlins are where it’s at for me and it seems like forever since I had my last fix. My anticipation for Lenny alone has been running very high, but in a turn that I should have expected by now, I have already gained a great appreciation for the Phantom and generic brown Gremlins. In fact, it looks like I will be needing a few more of the latter to fill out my movie 2 ranks.

I have said it before: while I love Gremlins 2 and really appreciate it for its creativity and send up of sequels, my heart will always lie with the original in terms of movie love. What the sequel did do an awesome job of was offering all kinds of insane (and insanely cool) variations on the standard Gremlin, and many of them had personalities much more rich than most human characters in comparable creature features. Plus, Christopher Lee plays a modern day mad scientist whose formulas gave us such memorable characters as Bat Gremlin, Veggie Gremlin, Brain Gremlin, and the vivacious Greta Gremlin (she was the female one that was hot for Robert Picardo)–if you cannot appreciate that, I have nothing for you. The cast of little green (and brown) characters is great and I can only dream that NECA can continue to give us more series to fill in the gaps of missing mischief makers. I know a prototype of Greta has been created, but if I got the Veggie Gremlin, I would probably lose my mind in the best way possible. However, what we ARE getting is super cool as well. 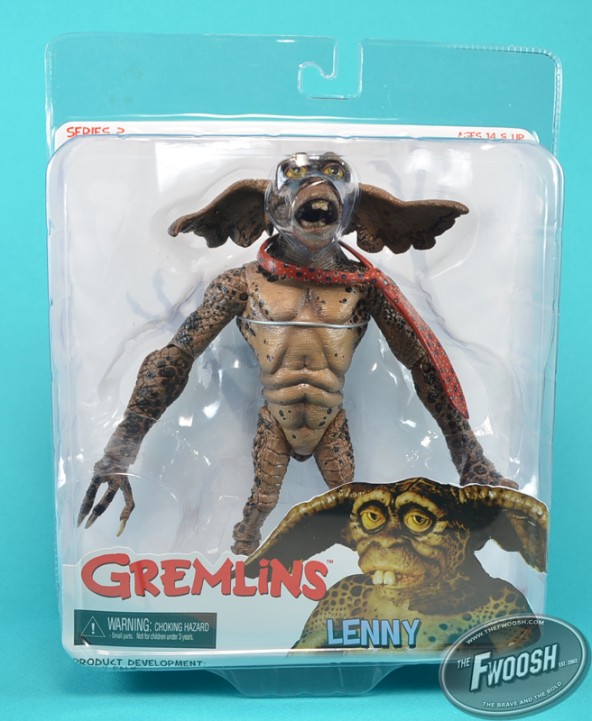 Ah, the last of “main” Gremlins finally joins his buddy George on my shelf and he (and I) could not be happier about it. I know that Mohawk probably garnered a lot of fans due to him being the diabolical “leader” of the group, and Daffy had that insane appeal (loved him as a kid) going for him, but the combination of George and Lenny represents my personal favorite part of that original quartet of Gizmo buddings. Obviously, the are in name and personality a send-up/tribute to the Of Mice and Men characters, but I also enjoy their antics through the Clamp Center the most. They compliment each other so well and so far in NECA’s offerings, they are my favorite of the Gremlin and Mogwai figures. 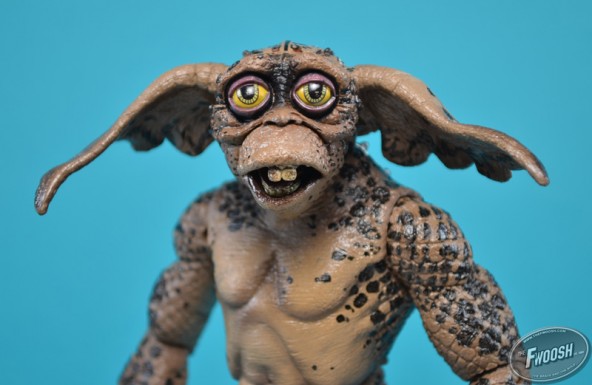 Lenny is, of course, the slow-witted but sweet (for a Gremlin) muscle of the group, often carrying out the heavy lifting for Mohawk and George. NECA sculptor Trevor Zammit (man, that guy is a talent) is once again responsible for the sculpt and Lenny, unlike the others, is an entirely new sculpt. His body type is different from the version you are used to seeing with the new Gremlins thus far, and he is thicker and smoother than the others. This fits his “muscle” persona and I am VERY pleased that NECA went the extra mile and gave us a unique sculpt for him.

The figure is unmistakably Lenny and his large eyes, buck teeth, and floppy ears are fantastic interpretations of his screen persona. His coloring is more brown and dim (get it?) than George or Daffy or even Mohawk, and his torso is thicker as well. If you have any of the previously released Gremlins, you know that the paint detailing is amazing and Lenny stays right in line with that. A lot of browns, blacks, and even some white make up his palette and he stands out from his colorful brethren by being more muted. Lenny is a little light in the accessory department, but he does come with his famous necktie. One thing of note: his head actually articulates at the top of the neck and is a separate piece, unlike the others that have attached heads and necks. This makes it possible to remove his head in order to take the tie off of him, I don’t believe there is another way to do that.

If nothing else, this assortment finally ensures that we have the main Gremlins from the sequel and once I have the next set of Mogwai in hand, all can be accounted for. Sure, I want a lot of the characters I mentioned above, and I would welcome a Mohawk revisit and more guys from the first movie, but I think NECA has done a great job in getting us the most memorable characters. 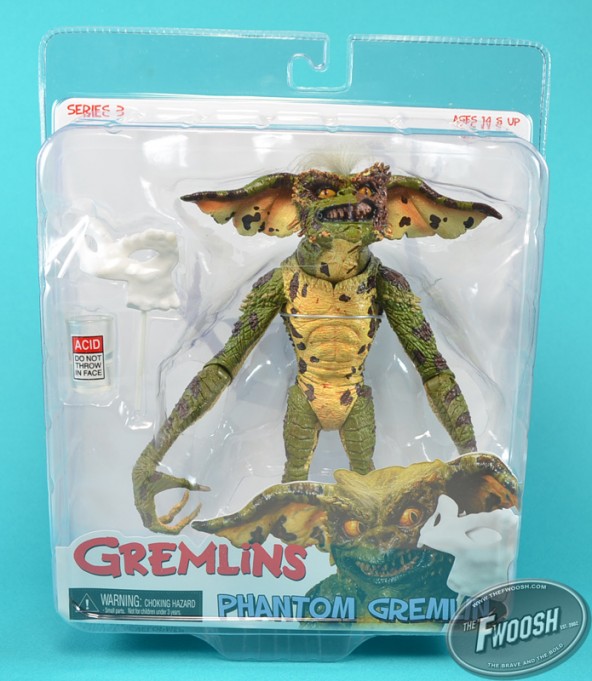 Ah, the little mutated sight gags are a big part of what made The New Batch so great and while the Phantom Gremlin’s screen time was of the “blink and you miss it” variety,  he is still memorable for his transformation scene. Ah acid, you have made so many things possible in the celluloid world and creating a parody of Gaston Leroux’s Phantom of the Opera certainly ranks high as far as I am concerned. I always thought the best part of the scene was fact that the acid vial clearly says “DO NOT THROW IN FACE” so I am quite pleased that that accessory is included. 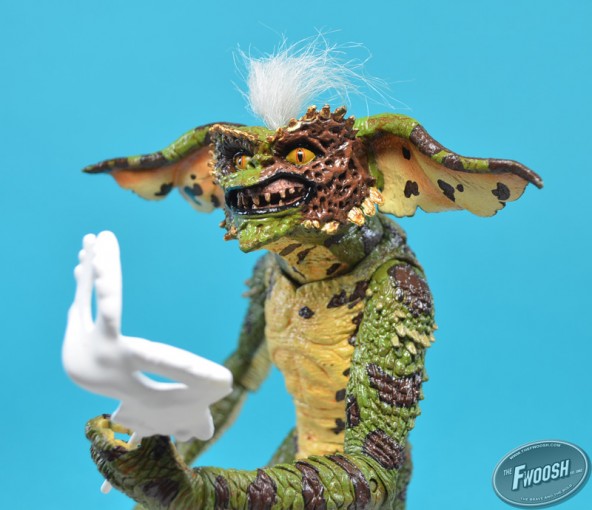 For the most part, the Phantom Gremlin utilizes the same body that Daffy, George, and Flasher use, but with a new head and hand to accommodate the aforementioned acid beaker. Gremlins are (by nature) kind of gross, but the scarred up face and maw of the Phantom takes them to another level. The sculpt is beautiful in its hideousness, and, while he does share a lot of parts, he is instantly distinguishable. He also has a small tuft of hair set just above his brow to add to the classic Phantom aesthetic, something we have not see with the Gremlins figures since the release of Stripe so many years ago. 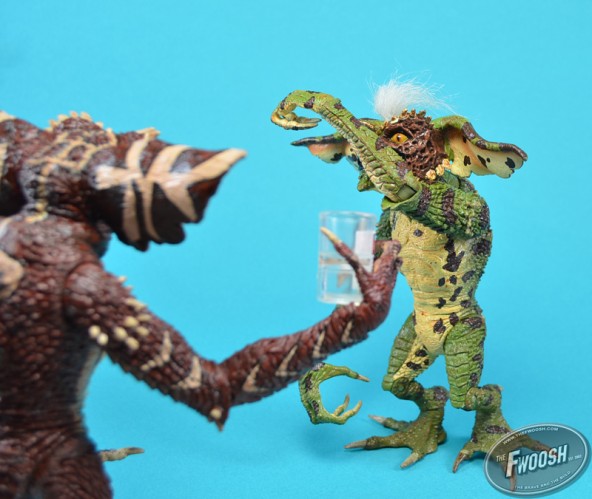 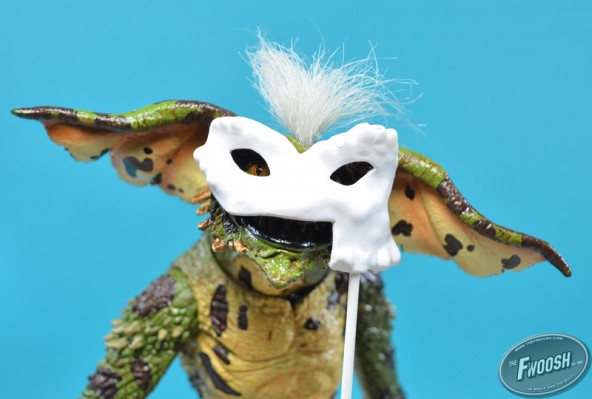 One thing I do want to mention is that, while the paint detailing is right on track in all these figures with series 1, the paint itself seems to be a bit shinier. It is not instantly recognizable, but it is slightly different to my eye. I cannot decide if that sheen actually makes them more accurate to the design of the Gremlins from the sequel, but I think it does.

The final accessory included with the Phantom is his trademark handled masquerade mask. It is set in a all white matte plastic that is accurate to the source and in a very nice touch of engineering, it can actually snap on to his face. That makes for a mask that will stay in place and it looks great on him. The Phantom can hold the mask, but my one little quibble is that I cannot get him to hold the stick while the mask is on his face. Maybe he can do it, but I have not found a way yet, but it would really complete the full effect if he could. I know it’s minor, but if you can get him to do it, please tell me how in the comments section below. 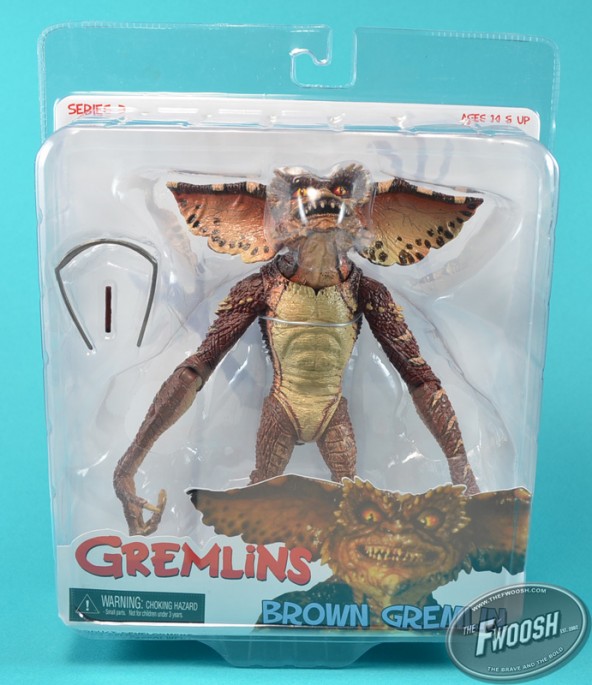 Ah, my Gremlins shelves just buckled in anticipation of the arrival of several more of this “army builder.” I am not the biggest builder out there, but in the case of the Gremlins, having several generic guys running around to give more numbers to the ranks is a great thing. I have several of the Poker Player figures from the first movie unadorned for some standard Gremlin goodness, and I even bought a couple of extra Flasher Gremlins from series 1 to remove their coats for basic green Gremlins. The Brown Gremlin is 100% the Flasher in construction, just without the coat. Personally, I am completely fine with that and the new color scheme looks even better than the green in my book.

Color variation in the Gremlins was also something newly introduced in the second movie and primary characters like Lenny and the Brain Gremlin benefited from this new variety. The paint on this guy is as close to flawless as you can get and I even like how his eyes are red in contrast to the Flasher. I never really considered myself to be a big “brown Gremlin” fan, but having this figure, I think I might be a convert as he might be my favorite of this group. Seriously.

He comes with reused accessories from the Flasher as well in the form of sunglasses and the cigarette. The latter has been repainted with a brown color scheme so you can pretend that this is a little Black & Mild cigar if you want, or even a Slim Jim. Was there ever any cross-promotion between the Gremlins and Slim Jims? Seems like there should have been.

I have made it no secret that I am completely over the moon with NECA’s realization of this property and it’s a line I would love to see go on and on and on. I know they have recently said that this series and new Mogwai need our support to help ensure that we get more figures in the future. Right now, I think the only other thing past the next series of fuzz balls is the Holiday movie 1 Gizmo coming later this year. If you have delayed in getting these, I HIGHLY recommend them. They are just fantastic toys from an awesome property. There is still a lot to do in terms of the property and lots of characters I want them to get to get to. In that spirit, I am going to be super nice and provide you some links to Big Bad Toy Store below so you can order your own set. I think these will be highly desired in the next couple of years so don’t miss out now; they are tons of fun and you can see by my collection of figures from the sequel–they look GREAT together: