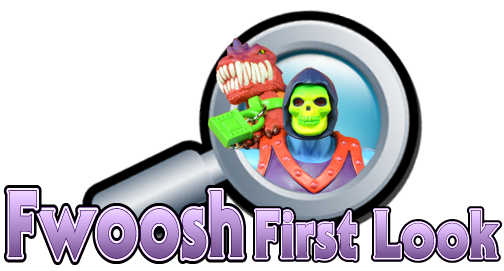 You’ve gotta love 1980s toy logic. Even if you were not a part of the target demographic of the times like I was, you have to appreciate a lot of the toy lines and concepts that ran amok during that ten-year period. Cars that turn into robots, muscle-bound barbarians, ghost chasing men, and anthropomorphic cats and turtles were some of the biggest highlights of the greatest decade of toys ever. EVER. It is a scientific fact, so don’t even try to argue it. So, in the Masters of the Universe line when it came time to refresh the main characters like He-Man and Skeletor, designers were only all too willing to liberally apply the crazy logic that kept moving them higher into the stratosphere of outlandishness. So applying that to Eternia, when you have the baddest bad on the planet (Skeletor) and you need to make him even MORE bad, what do you do? The answer is obvious–strap a venom-spouting dragon to his back to be his weapon and slave and lock him down with a giant green padlock and chain that goes through your armor and is cuffed to your wrist. Duh! Dragon Blaster Skeletor, you are a benchmark of high-concept toy logic that has seldom been equaled. Welcome to Masters of the Universe Classics.

I have to admit that, even as a kid, I was never one to be into character variants with my action figures. There were a few that I got into like Punk Rocker Donatello from the TMNT line (still have that one), the blue Mr. Perfect WWF figure, and Dragon Blaster Skeletor, but for the most part, I never had much interest in most of them. So, even as a kid, I realized that making Skeletor more evil with a wicked worm attached to his back was pretty ingenious, and while he never became my default Skeletor, he was the one that certainly meant business. Plus, on hot days, that blastin’ dragon could act as canteen to provide a maximum cooling factor while remaining completely evil. Summertimes at home and Eternia were sweltering ordeals, and since I was the holder of the Evil Warriors, I had DB Skeletor and Kobra Khan, so my water supply was ample while my brother and his goody goodies were left high and dry. Okay, maybe it was a little weird for a kid to repurpose figures as water resources, but I have never admitted to being normal. 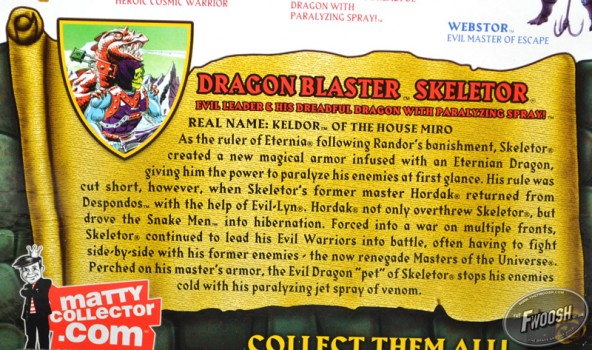 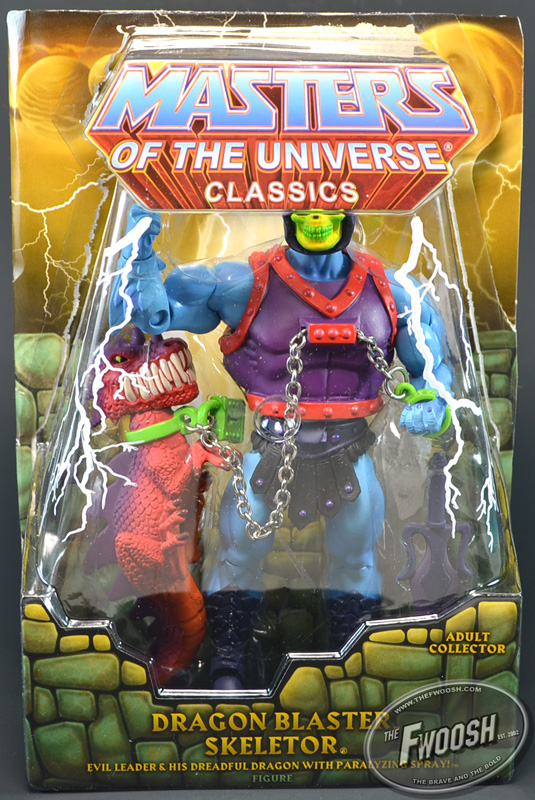 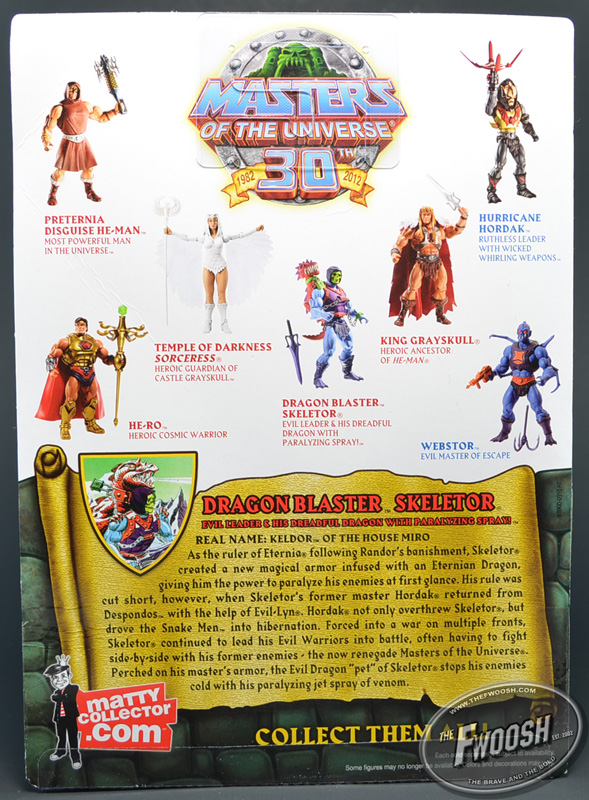 Even though I have come to really appreciate the variants in the Classics line, and I LOVE my Battle Armor Skeletor, Dragon Blaster has been the one I was waiting for. Once Thunder Punch He-Man was revealed at SDCC last year, I got hopeful that since DB was his vintage counterpart, we would see him in 2012 as well. Once that sneak peek email from Matty hopped into my inbox, I was totally stoked. I still consider Skeletor to be one of the best MOTUC figures we have gotten and adding a mythical reptile and chain to him could only make him better. However, he is not just a new variant of an old favorite–if you look closely, you can see that he also holds the parts you need to build a classic toy version of Skeletor. For the vintage toy line fans (not so much those that love the cardback art) this might necessitate a double purchase on September 17th. 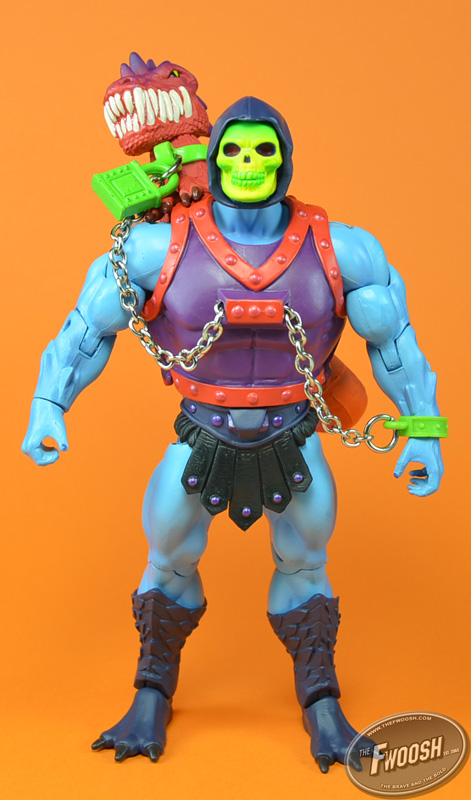 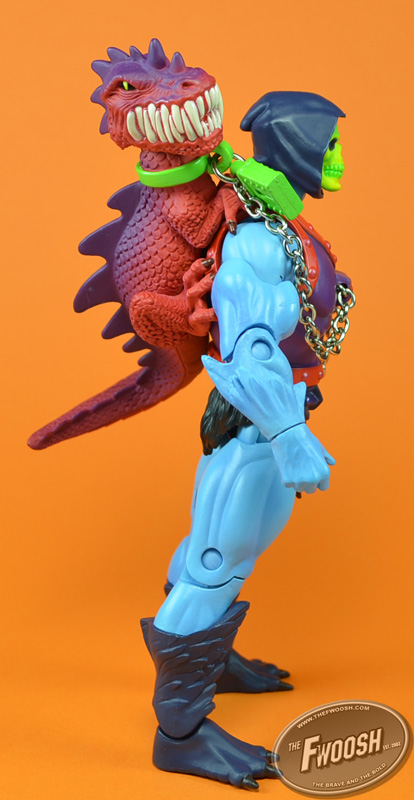 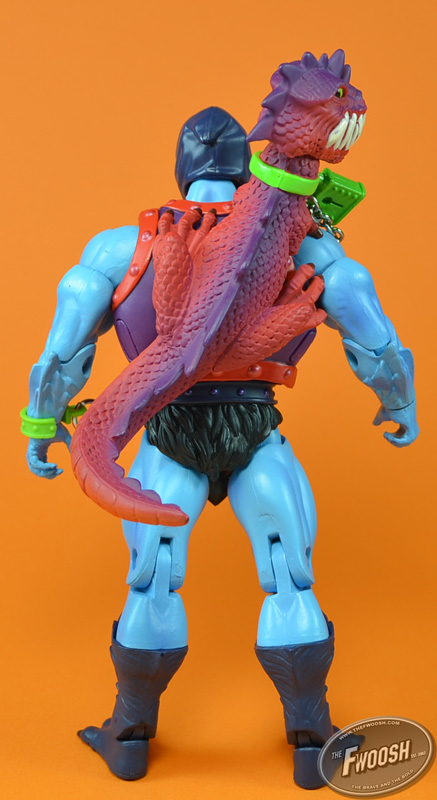 Just like our previous Look at Rattlor, I can tell you that DB Skeletor is pretty much exactly what you would expect and want out of a Classicized version of the vintage. As I mentioned, this figure is much more in line with the toy version of Skeletor rather than his classic card back interpretation. He has the Kobra Khan “boots” and painted feet that recall the figure more than the previous Skeletor shin guards. He also has the forearms that were introduced with (I believe) Whiplash instead of the finned arms of the figure released earlier in the line. I am quite pleased that the Horsemen went in this direction since it opens up a lot of opportunity for varied display choices. While I was not necessarily interested in building a classic toy Skeletor because I love the version that we got oh so long ago, this figure actually has me reconsidering. I really like the look of all of the assembled parts and it looks to me like there is a brighter and more vibrant blue used for his flesh tone. 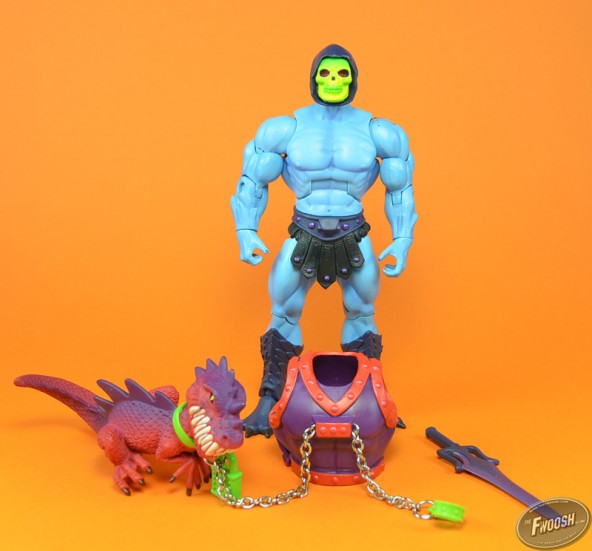 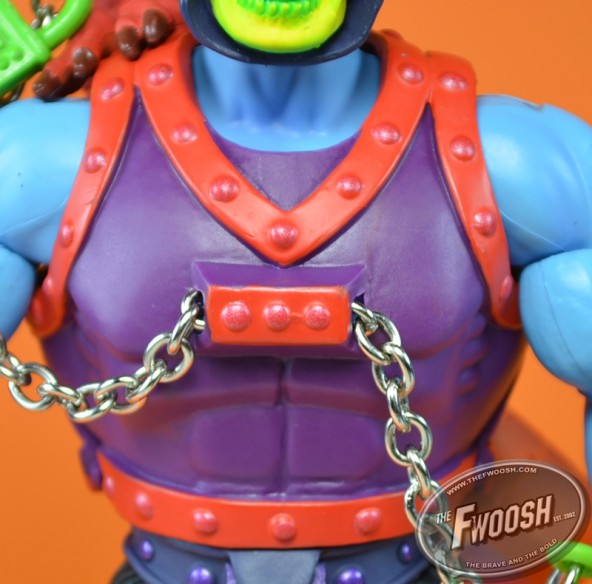 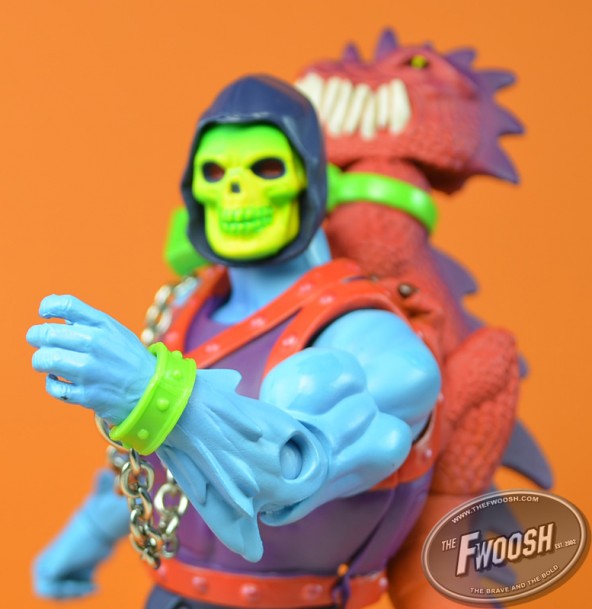 He also has a bright and crisp paint scheme on his face. The sculpt is the same standard Skeletor head, and the yellow and green colors are the same as before (or very close), but the application of the green is a lot tighter on this release. What I mean is, where there was a lot of variation from figure to figure before due to the liberal application of the green paint, I don’t think that will be the case with this figure. The green is pretty tightly contained around the eye sockets and mouth with less permeation into other areas, such as the forehead and cheek bones. I really like the looks of it and since there is less green, his face seems quite a bit brighter. 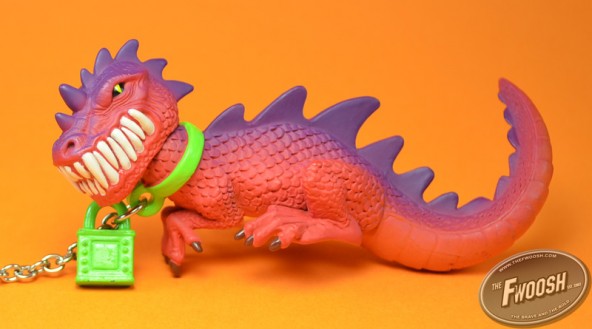 The face is the good part of the paint scheme and even though it pains me to report it because everything else on the base of the figure clicks so nicely, there is a *potential* issue that might arise from paint as well. Not too long ago, Spikor caused a bit of a ruckus when it was discovered that his legs were painted purple instead of being cast in  purple plastic. To be honest, as long as it looks good and colors match up, this is not an issue for me. However, I do have to confirm that DB Skeletor’s shoulders are painted blue but are cast in black plastic. Again, this would not be a issue for me at its base, but I am getting a little scraping on the right shoulder where the biceps piece rotates around the peg. That is pretty disappointing to me since it can easily be avoided and I am not quite sure why this was done because painting something is ALWAYS (always) more expensive in the toy world. The severity of this is going to vary on a case-by-case basis, but it is something to be on the lookout for, and on a figure where everything else works so well, this choice will likely frustrate some fans.

But what else is different about this figure aside from having a small dragon enslaved on his back? Well, he does have new armor for one, and that classic dragon chain, cuff, and padlock we all remember. All of these are recreated in fine style and the armor is nice and sturdy, but still removable. The purple and red scheme work well against the colors of the dragon itself and the rivets and chain pass through area add nice changes in texture. I have always been a big fan of the lock and chain scheme of this figure and it all works wonderfully well in the Classics translation. 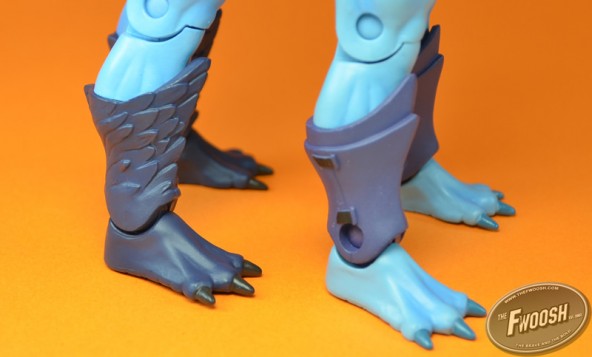 The chain makes it so the actual dragon cannot be removed completely and the chain cannot be removed from the armor. I guess I was kind of expecting that the dragon could be removed, but since he does not really have any display options past hanging out on Skeletor’s back, it is not a huge issue. The padlock is big and green (just like you remember!) the chain is real (just like your remember!) and the green cuff clips on to old Keldor’s wrist (just like, well, you get the drift). All of these parts make for a very busy figure, but they work well together to ensure maximum dragon awesomeness. Oh, and you also get another purple Power Sword too.

As for the dragon itself, with the introduction of Draego Man this year, he brings a whole other level to this dragon weapon/slave thing. Before it was easy to just accept that Skeletor found himself a dragon, strapped it his back, and commanded it to spray-attack his enemies. He is, after all, a bad dude. But now, he has a dragon slave and has also recruited Draego Man to his cause. That brings his level of buttheadedness to an all time high. Imagine yourself as Draego Man showing up for  your first day of work at Snake Mountain. Are you with me? Beast Man takes you through orientation and then the boss welcomes you to the team and BAM–one of your brethren is a slave that Skeletor keeps on his back, in chains. Man, Skeletor is the true jerk we always took him for! 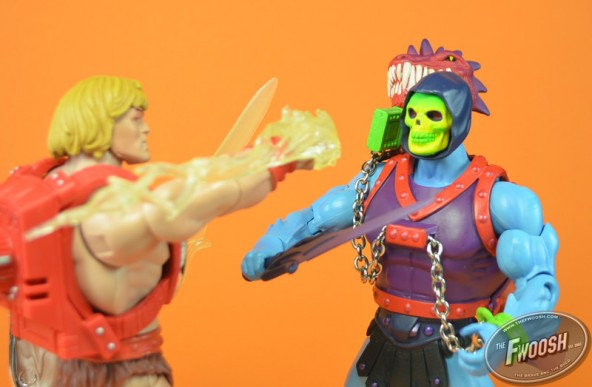 But about the dragon itself, much has already been discussed regarding the head sculpt. While I will admit that it is not exactly what I expected it would be, it has grown on me since its debut a few months ago. Over the past couple of decades, I have spent more time looking at DB Skeletor on the vintage William George painting (below) than the actual figure itself, so I guess I always expected the Classics dragon to look like that, even though there was not a lot of basis for it. I bet I am not alone in this regard either. But like I said, his toothy sneer is growing on me. His color scheme is consistent with the original and he has a lot of nice purple airbrushing down his back to bring out the scale details. Aside from where his head connects to the body (just like all MOTUC figures) he does not have any articulation and there is nothing to speak of in terms of representing his vintage water spray action feature. I cannot think of an instance that would have me display this dragon on his own, so it is not an issue for me personally, but a tail twist could have added a little something here. 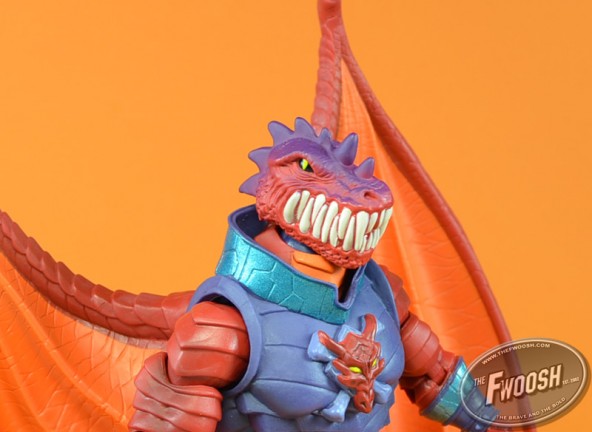 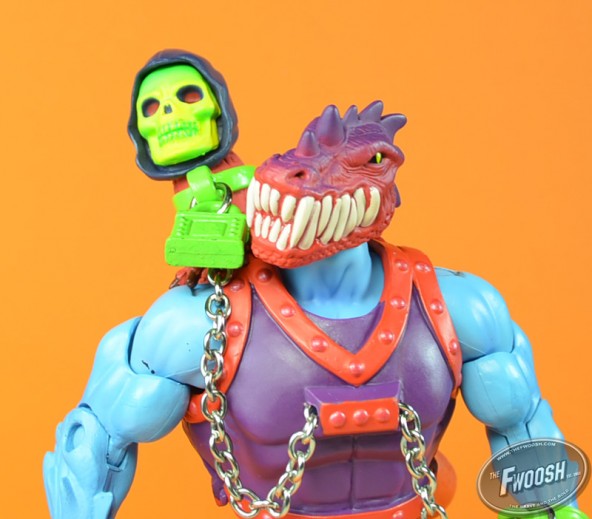 Overall, I really like this Classics incarnation of my all-time favorite Skeletor variant. He compliments the Thunder Punch He-Man figure nicely, and with the format of the line changing in the not-too-distant future, he might be the last Skeletor variation we see for a while. The concept of putting a dragon on his back to make him more evil has always been awesome for Skeletor, but he has to be getting a bit nervous since Granamyr is coming in December–I am sure he will not appreciate this getup. Like I said, the painted shoulders not withstanding, this is a very solid figure and since you can recreate the vintage Skeletor figure with this guy, he is likely to sell even faster on September 17th, so be there on time. I want to note that this figure will also include the final mini-comic of the year, but it was removed from this sample so I am betting something big happens in the conclusion.  2012 is the official Year of the Dragon, and MOTU Classics is celebrating in fine style.

*Thanks for reading and thanks to Toy Guru for rushing him out to us in time get this feature up prior to the sale date. Yep, we still have MOTU goodness to bring you so stay tuned! 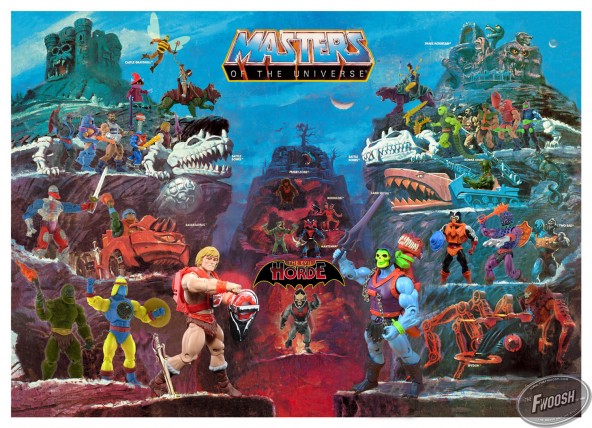