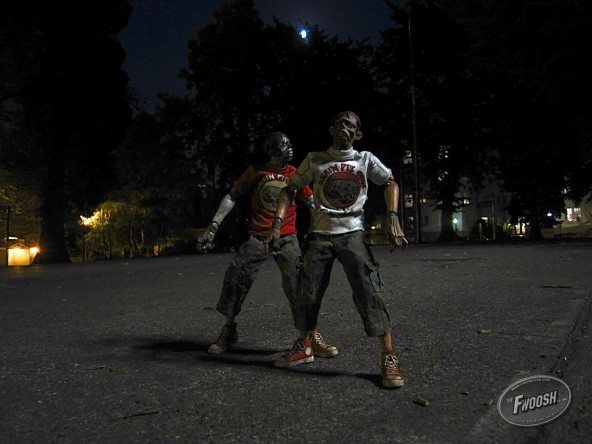 Ashley Wood and Chris Ryall’s comic series Zombies vs Robots was my introduction to Ashley Wood’s work, so when it was announced that this year there would be exclusive 1/6 ZvR Zombs at SDCC, there was no question that these would be a major want of mine, surpassing even Hasbro’s X-Force set on my list of must-have exclusives. Predictably, the ZvR Zombs would prove to be difficult for many fans to get since they were limited to just 250 pieces, but that’s just par for the course with ThreeA, isn’t it?  Are they worth all the bother and stress it took many fans to get them? Continue reading to find out!

Strictly speaking, these Zombs are not ThreeA exclusives—they’re IDW exclusives that were produced by ThreeA. When ThreeA announced these exclusives, fans were encouraged to write to IDW to find out more about the Zombs’ availability, and IDW was kind enough to reply stating they’d let us know in advance when and where these Zombs were going to go on sale. See, they had to be preordered by anyone who wanted them, and then fans who were able to order would be able to pick them up, or have a friend pick them up, at SDCC. 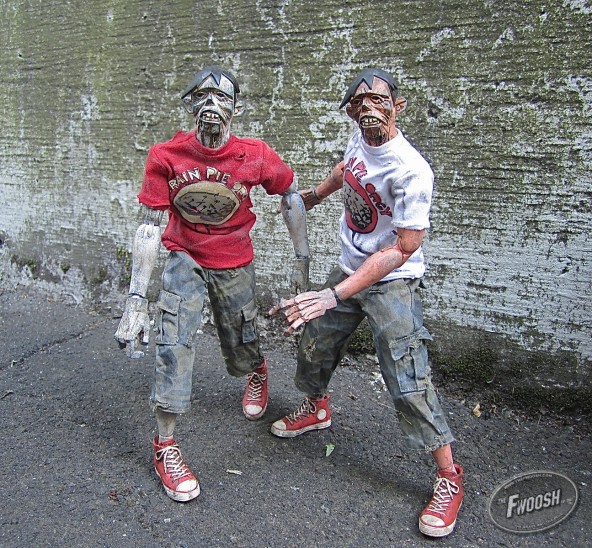 Unfortunately, that e-mail wasn’t sent exactly as promised. The Zomb sale went live on IDW’s website with no warning one Friday morning a few weeks before the con, and that e-mail they promised was sent out several hours after the Zombs went live, so many fans missed out on the preorder completely. As pure luck would have it, I checked Facebook when I got up that morning, saw the link, coordinated with an old friend from Denver who was willing to pick them up for me, and ordered the maximum number allowed—two—hoping for one of each color, gray and orange. Thankfully, since the sale was unannounced and word hadn’t spread yet, I had time to coordinate everything and still get my order in. ThreeA sales often don’t go that smoothly. 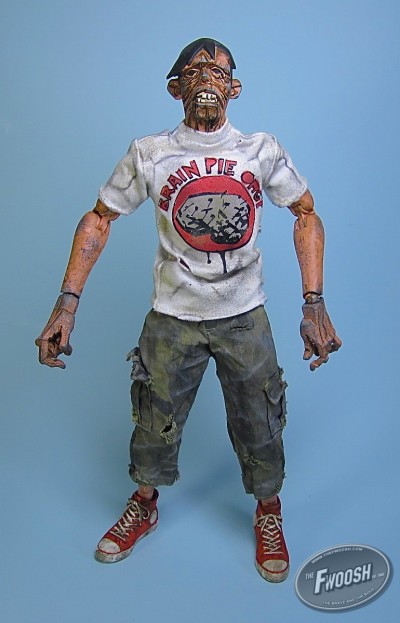 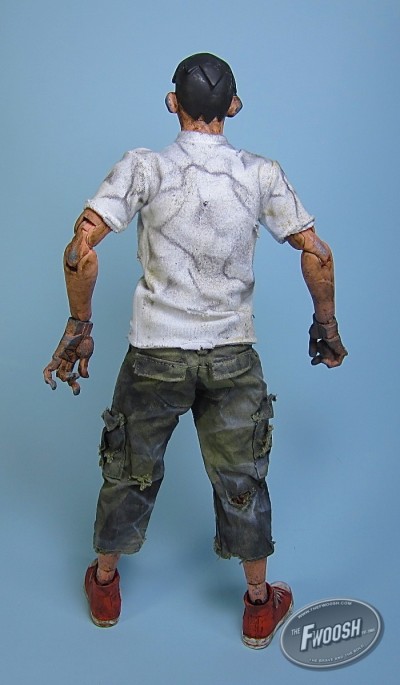 The package design is very basic. It’s the standard 1/6 figure box with what looks to be artwork from Wood and IDW’s Zombies vs Robots comic depecting the Zomb contained within. And like the box for 2011’s NYCC Zomb, these guys are packed in a straw-like material to protect them from trauma during transport. I’m not a huge fan of this stuff because it gets everywhere as you try to free the figure from it, but in a way it does embody that DIY ethic that Ashley Wood seems to favor. 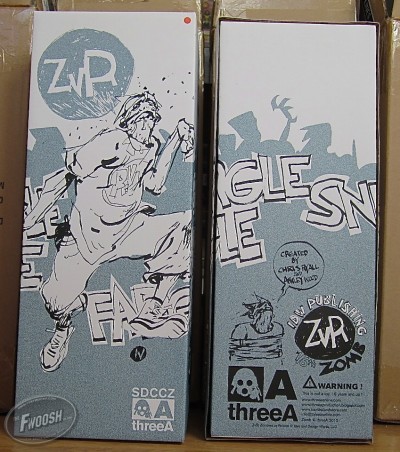 The initial teaser image showed them only in profile, so there was a bit of a leap of faith fans had to take when ordering because we really didn’t know exactly what we were ordering. All we knew was that these were new Zombs with a new head sculpt, so that was enough to make fans absolutely rabid. When better pictures finally turned up, well, let’s just say this new head sculpt didn’t exactly win these Zombs many new fans. The sculpt is a fairly large departure from what we’d come to expect from the Adventure Kartel Zombs. Instead of a certain endearing charm The AK Zombs have, we got something truly ugly and a bit vicious looking. At first, I was disappointed in my having been so quick to order blindly because I wasn’t sure how much I liked this new head sculpt. I’m actually being too nice here because the truth is I didn’t like it at all and had a case of true buyer’s remorse. I straight up didn’t like it and wondered how much success I’d have trading them for some of the new Action Portable Zombs that are also hitting right now. I was bummed. 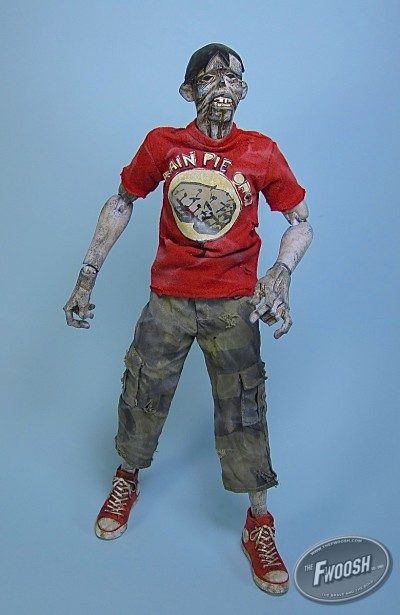 However, once I got them in hand, they won me over fairly quickly, and I can say with confidence that I am now definitely a fan of these two Zombs.  I was very fortunate that I ended up with the pair that I did because they were blind-boxed with four possible variations. Each box had a different color sticker that indicated what Zomb was in the box. The four possibilities were:

I got a green and an orange, but the first thing I did when I unboxed them was to swap their t-shirts because I much prefer the combination pictured here. I also reversed the t-shirts so the graphic that should be on their backs is now on their chests. It just looks better this way, I think. 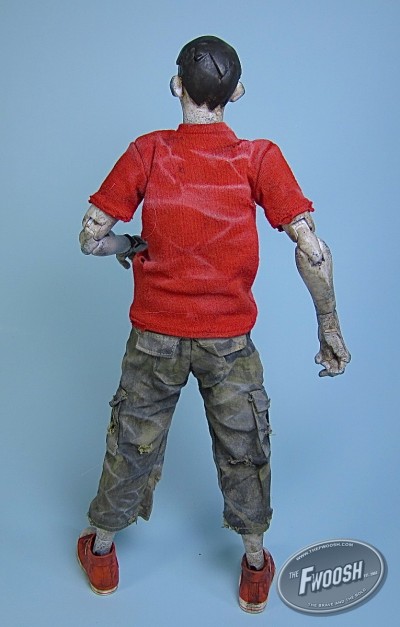 Let’s talk about this head sculpt. Some fans have been very vocal in their dislike of this Zomb head sculpt, but having it in hand, I think the true issue here is the paint job rather than the sculpt. The paint job lacks the simplicity of the OG Zombs, which may be the problem right there. There’s a lot going on here: the sculpt is a bit on the busy side to begin with, but not horribly so. There are several different color paints used here in addition to the token ThreeA weathering, so the paint layers seem to magnify all the details perhaps a bit too much. The result is a very busy head sculpt that is quite ugly at first glance, and it doesn’t fit in with the other Zombs at all. But perhaps that’s the point? 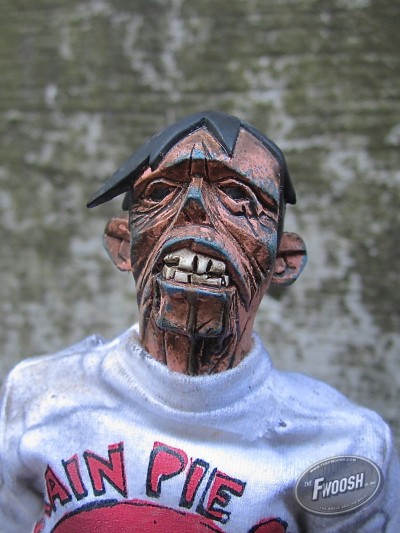 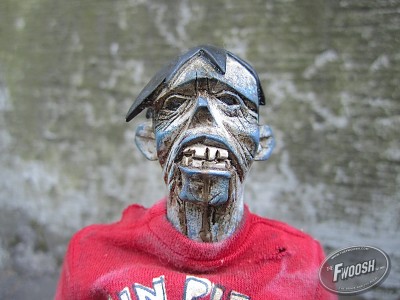 It’s easy to forget that these Zombs are not part of the Adventure Kartel line like the rest of the ThreeA Zombs are. Zombies vs. Robots is its own property, so these Zombs are basically stand-alone figures among the ThreeA Zombs. Sure, they share many body parts (everything but the head, basically) with the AK Zombs, but that head sculpt is an instant reminder that these guys are different; they’re their own thing. 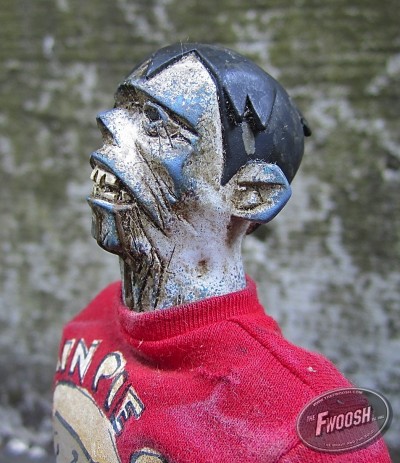 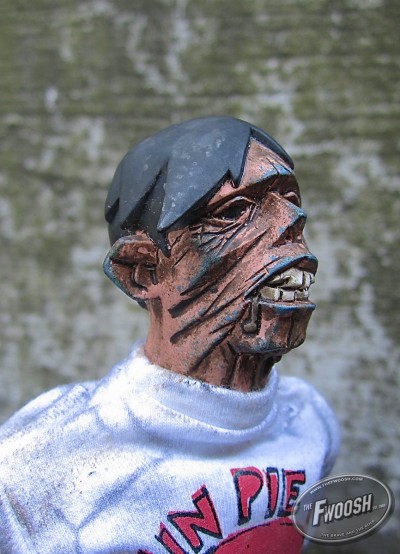 Something else that’s new here is the ratcheted joints. When the arms and legs are moved, they “click” in place. That’s something we haven’t seen before on ThreeA’s 1/6 figures. It seems like this could be a positive thing because maybe they’ll be less likely to become loose over time, but this is definitely a new aspect that’ll take some adjusting to. Posing isn’t hindered at all from my experience, but some fans are expressing their concerns over this new development. Aside from that, there are your standard 1/6 ThreeA figures with all the articulation you’ve come to expect. It should be pointed out that this is the new slim body type that ThreeA used for Rothchild. It gives the impression that these Zombs were probably younger kids before they turned. The shoulders are narrower than the AK Zombs and in some ways they look more natural and realistic.

When I look at the Adventure Kartel Zombs, I picture them as the traditional, lumbering, slow-moving Zombies from classic movies like the original Dawn of the Dead. These Zombs, however, strike me as the vicious, crazed zombies capable of a full-tilt sprint in movies like 28 Days Later. They’re scary and look like they could eat your face off while you sleep. And if you do manage to get away, then there’s a good chance they’re going to be right on your heels as they run after you. They just look plain mean. 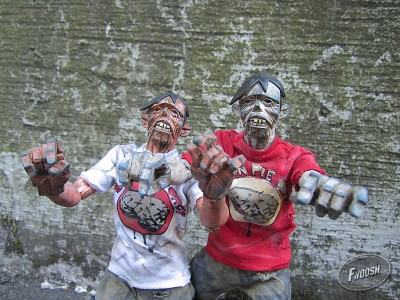 It’s fair to say that these Zombs aren’t for everybody. And as cliche as it is to say, they are truly better in hand than they are in many of the pictures I’ve seen online. Like I said, I wasn’t even sure I was going to keep them, but now that I have them, I can say that I am 100% definitely keeping them. I love the way they look in person and they quickly became favorites of mine. In terms of picking a favorite between the two, I really don’t think I can. I expected to not like the orange one at all, but I’ll be darned if that’s not the one I pick up and play around with the most. And I love the weathered red Chuck Taylors. They speak to the Doctor Who fan in me. Tracking these guys down shouldn’t be too difficult, but it could be expensive. eBay or the various unofficial ThreeA BSTs would be your only bet at this point, and prices are sure to range from the mildly unreasonable to the flat-out insane. I recommend tracking down at least one if you’re a fan, but I would definitely wait for the right deal.