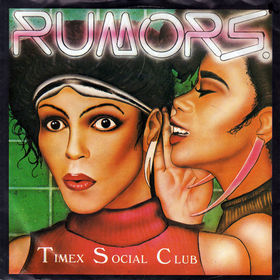 Being a child of the late ’70s and ’80s, my childhood toy-buying is wrapped up with the music of that time as well. It’s a testament to how much time I spent in my parent’s mustardy-colored Datsun truck listening to the lone radio station we could pick up while we puttered from store to store in search of some elusive figure. Decades later, if I hear a song that I’ve built a random toy memory around, I’ll be slapped in the face with a big handful of nostalgia, and be transported. Here are five songs that evoke memories for me from that era.

You know this one: we gonna rock down to Electric Avenue and then we’ll take it higher…and so forth. A song from 1982, it was a popular single and was played repeatedly throughout ‘82 and well into ‘83. Those years were major GI Joe and Star Wars years for me. GI Joe was a new toyline at the time, but Star Wars already had several years behind it, so that was where my brain defaulted. I have this song connected to those Star Wars Micro Collections with the small die cast figurines and the action-feature laden mini-sets. They also made vehicles, of which I have a TIE fighter and an X-wing. I believe the Bespin set is the specific toy I have this song tied to. It was the first one I got, and this song must have been the first song on the radio when I got into the car with my bag full of awesomeness. It’s always that first song that gets forever imprinted with the memory.

I managed to get almost all of those mini-sets. I still have them, but unfortunately the paint has started chipping off the metal on the figurines. Time is a bastard.

This is a 1986 song, and my toy memory is of getting the Transformer Soundwave who was first released in 1984, so that’s how long it took to track down that figure. I had wanted Soundwave forever, and already had all of the cassettes that were out at the time–Rumble, Frenzy, Lazerbeak and Ravage—just waiting to be stuck inside their master. I finally saw Soundwave in what was a huge toy mecca of my childhood: a store named Best. What a prophetic name. That store is single-buildingly responsible for a large portion of my childhood toy acquisitions, and responsible for another item that will show up later on the list. The store began a slow death towards the end of the ’80s, with a rapidly dwindling toy section that went from aisles and aisles to a small little display towards the back. My last time in that Best store before it closed for good was a bit like visiting someone in the hospital before the plug was about to be pulled. It was depressing seeing how far they had fallen.

But anyway, coming out of Best with my long-awaited Soundwave, first song on the radio: Sledgehammer. I had enjoyed the song prior to that acquisition, but that giddy feeling and that song merged together to form a single memory that can be ignited within a few notes.

Another 1986 song, and another extraordinarily catchy and ubiquitous song that pop radio loved. This one’s not technically a toy memory, but still wrapped up in childhood: Garbage Pail Kids. I’m not absolutely certain why this song makes me think of Garbage Pail Kids, but if it follows the same pattern it must have been the song playing when I opened my first pack. I was pretty heavily into collecting Garbage Pail Kids cards at the time, always buying a new pack whenever I could. When I hear this song, I can taste that bubble gum as if I’ve been stricken with Synesthesia. For a brief time, they were the coolest thing on the block, and this song was the hottest song around. What’s mine is mine, I ain’t got time for the rumors in my life.

This one’s a fairly obvious one, but for a slightly different reason. As anyone who has seen Transformers: The Movie, it’s the defining song of, and heralds, the most awesome fight in cinematic history when Optimus Prime and Megatron go at each other with everything they’ve got. Just for that, it deserves a spot on the list, but it goes a step further for me. In the summer of 1987 after having just watched Transformers in the theater, my mom and I walked a few stores down, went into Best (mentioned previously) and saw it: the Constructicon gift set, holding all five Constructicons, which meant a ready-made Devastator. I had never seen such a thing before, and had no idea it even existed, yet I knew I couldn’t walk out of that store without it, especially after watching Devastator wreck crap in the movie. Luckily, I didn’t have to, and that song became forever linked with that memory of finding the perfect toy after–for that summer day–the perfect movie.

5. Owner of a Lonely Heart by Yes

Definite theme of the list: huge chart-topping songs that dominated pop radio in their specific time period. This 1984 song is wrapped up with the 1984 GI Joes for me, specifically Firefly and Baroness. As most know, female figures are a bitch to find due to the fact that boys think girls have cooties or something, so tracking down the leather clad beeyotch was especially difficult back then. And Firefly…well, he’s Firefly, so everybody wanted him. Put those two facts together and you have ecstasy when you finally find the toy you’ve been wanting for what felt like forever. I don’t have the actual specific memory that connects those two toys with this song, but the connection is there, so there must be a reason for it. Not a bad memory to have mixed up with a pretty catchy song.

Have a song connected to a toy or just childhood memory? Let us know about it in the comment section.