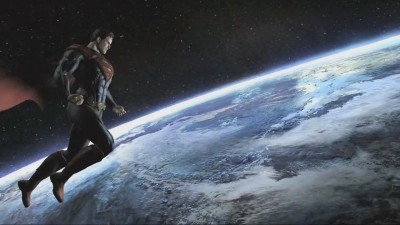 Wow, how’s that for feedback? In just a matter of weeks since SDCC and the announcement of INJUSTICE action figures (and about the same time since a little editorial featured on the e-zine), we got our first look at what that might look like courtesy of Mattel…
…and, it certainly got folks talking.
Whether you’re in love with, can’t stand, or the more likely somewhere in-between, there’s no denying there was something visually interesting about seeing this very “metal” Batman next to some other very hardcore offerings- including the freakin’ HOLY GRAIL of Batmen–ahem, another editorial for another time–and it deserves to be talked about.

As I was saying, and say what you will, but this is one interesting armored Bat-dude. There is a certain medieval quality to him, something that stresses function over stealth, not usual bat-territory. Like I mentioned previously, though, if there’s one thing that these designs lend themselves to, it’s articulation.
Here’s what I’m thinking/hoping/praying:

Keep in mind, this is just pure, wish-fueled speculation on my part, based on what’s likely a 2-up. Like the design itself, I see this as being a departure from the standard 4 Horsemen/DCUC model, and I find that interesting and exciting. Things like the torso, that looks geared to a “floating” abdominal joint, to match the cut of the armor, or the forearm pieces that look to enclose a ball-jointed wrist, to that very long knee pad and shin section, that is begging to hide a double knee. Or at least I hope so, so he can ease up on that poor, poor dead-ass horse.

As it sits right now, we’ve seen maybe half of the dozen or so expected offerings of DC Unlimited, so it’s probably safe to say we’ll see some more of these designs show up before the year’s out. There’s some obvious safe choices, like Superman, Flash, Wonder Woman, and so on, that we’ve seen designs of. But the recent game additions of Nightwing, Cyborg, and now Catwoman, might be ripe for the picking as well. Like the retail figure lineup, we’ve only seen about half of the character list, so there could be fun stuff there, too.

Once this new INJUSTICE-verse gets going, where will it settle in for those willing to add them to their collection? Will this Batman join your pseudo-modern JLA, your New 52 set? Or maybe scale will dictate: will he be talking with Gary Oldman and Aaron Eckhart next to the Bat-signal, or knocking the arm off of Arkham City Killer Croc? My gut is he’ll be somewhere in-between the Movie Masters and DCUC scale, since he looks a little on the slight side. My friend Muthasucka is thinking he’ll be in that bigger Arkham City scale, so we’ll see who wins that wager. Hell, maybe he’ll join your own version of the Judgment League of Avengers, next to Movie Captain America and Extremis Iron Man….

So, right now, the most interesting part about seeing this figure, and his assortment-mates in general, for me? It spurred a renewed sense of possibility. That’s why this page is full of speculation, because at the moment, that’s what INJUSTICE, DC Unlimited, and Batman Unlimited have plenty of. And it wasn’t that long ago, speculation was all we had for a new Rocksteady-developed Batman game, or even that long since we were speculating on what this new line replacing DC Superheroes was going to be about. So it’s kind of nice to live in the land of wonder a little once again. It’s never going to be the same as it was, but there might still be some things worth being a part of.

Until that Batman shows up with single knees, then I’m on the first ride back to cranky-ville.