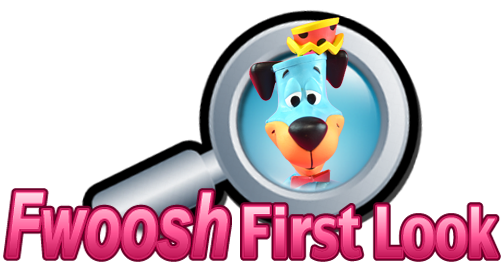 Well, well, well, this line snuck out of nowhere for me! I watched a lot of Hanna Barbera cartoons as a kid and looking back on it now, it was always one of the properties that I wanted to see in plastic. Tom & Jerry, The Jetsons, The Flinstones, Yogi Bear, and Huckleberry Hound were certainly some of my favorites as a kid, but as I got older I grew to appreciate characters like Secret Squirrel, Grape Ape, El Ka-Bong, Penelope Pitstop (with Dick Dastardly and Muttley), and some of the other second- and third-string characters more and more. Well, Jazwares has started to sneak out action figures for the HB stable in two different scales, and all I can say is–it’s about time someone did it! But how do the figures stack up? It’s one thing to wish the world for characters you would really love to see get the action figure treatment, but the full measure of success can only be truly realized in the execution. For our debut First Look, we have gotten our mitts on Hong Kong Phooey and Huckleberry Hound from the six-inch line. So what’s the verdict? 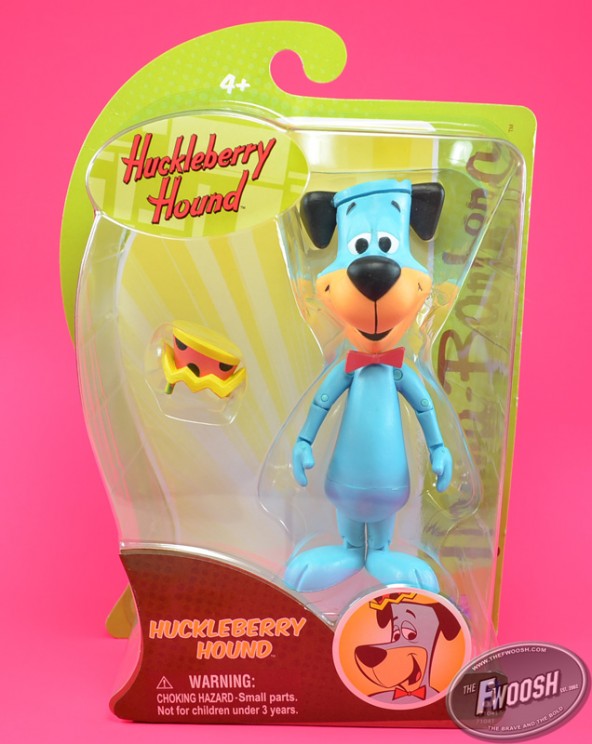 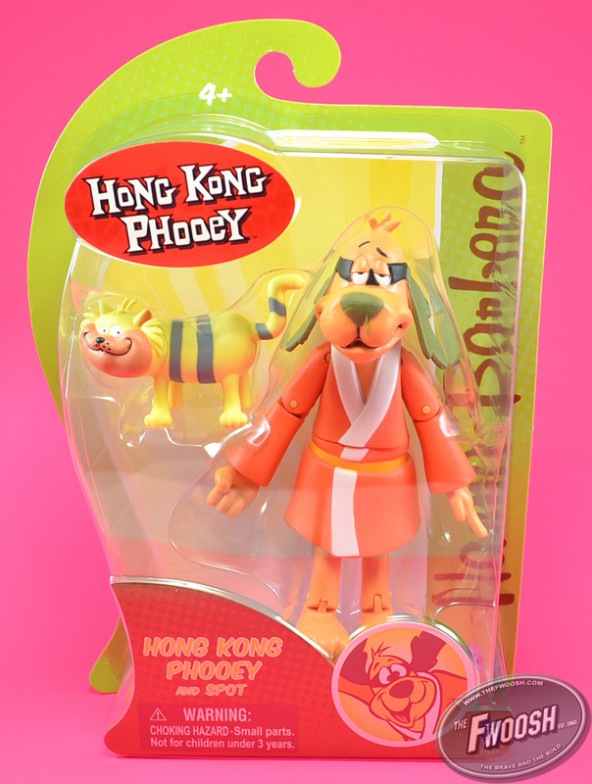 I’ll get this out of the way right up front: although I am pleased as punch to get a chance to collect some classic Hanna Barbera action figures, these first two figures are leaving me pretty divided in the overall execution. I think that heart is in the right place on everything that I have seen so far (that includes a couple of the three-inch figures), but in order for this line to really hit the right notes with collectors, the production quality is going to have to improve. I HATE to have to start a First Look with making that assertion because you know it will come up again, but I REALLY want these figures to be the best they can be, so hopefully the first round of offerings will provide a bit of a “lessons learned” opportunity for Jazwares and subsequent series will be even better. 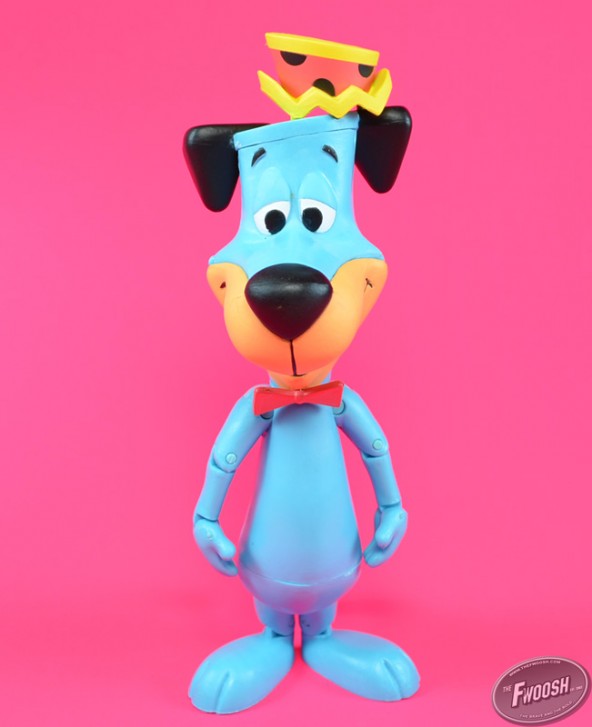 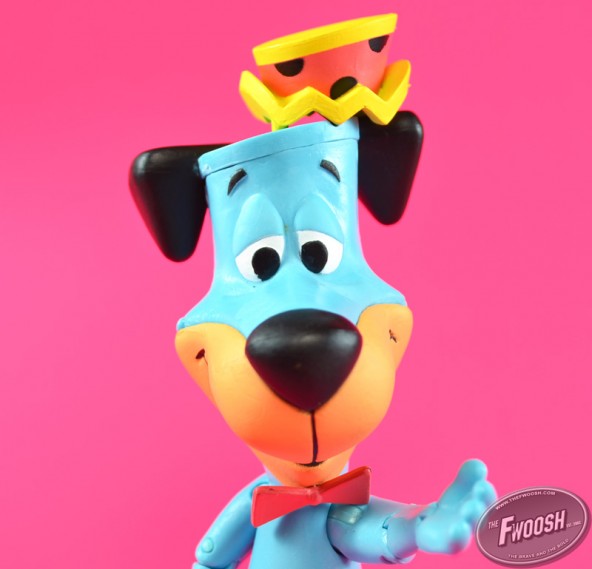 So, starting with the positives (I am, by nature, a positive guy when it comes to my hobby), I think that the Huckleberry Hound figure looks great. They were really able to capture his likeness and give him a classic feel. His facial expression is right on and appropriate and his bowtie and hat (removable) are realized just like you would imagine for the character. I like the shade of blue used for his coloring, and while it is bright, is not overly-garish to the point of becoming an eyesore. Well, as much as a light blue hound dog with a southern drawl can be. I suppose you can call his hat an accessory since it is technically removable, but it would have been really nice to have had his banjo included as well. I mean, even if you are not a high-level Huckleberry aficionado, you at least know him for his rendition of “Oh My Darlin’ Clementine.” 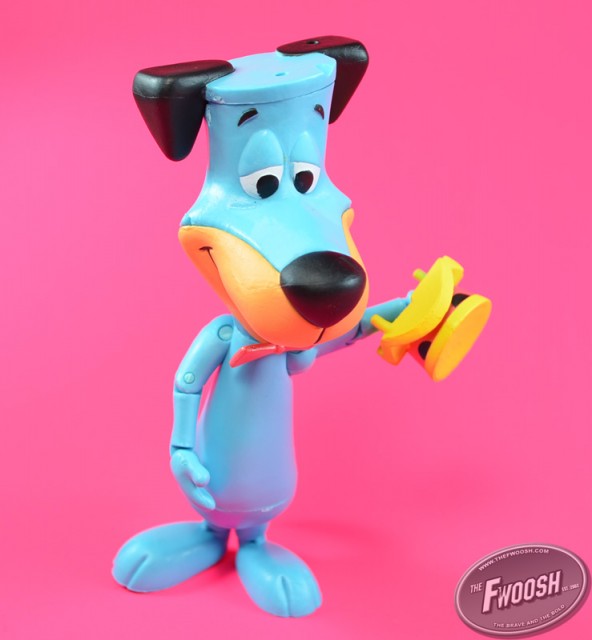 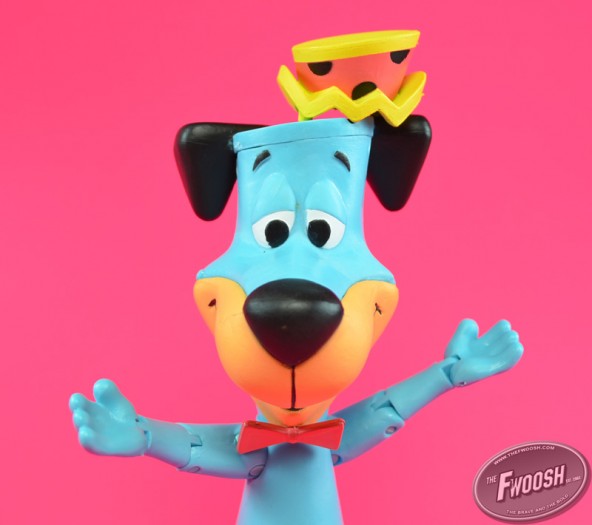 Where this figure hits the skids, though, is in some of the articulation choices and the overall engineering. Actually, that is true for both Huckleberry and Hong Kong. There were a couple of each of the figures hanging on the peg (save of a lone Space Ghost that I left due to being a very happy owner of the older Toynami version) at my TRU, so I was able to pick and choose with the paint jobs, and I am REALLY glad I had the chance. The overall production quality of the paint on these figures is going to be very hit and miss. I think I was able to get a pretty good Huckleberry Hound, but the other two I saw had varying degrees of issues from paint scrape on the nose to a very misplaced pupil. I have always said that paint can make or break a figure, and even though these do not have the most paint applications out there, it is still very important to keep up the QC with paint applications. 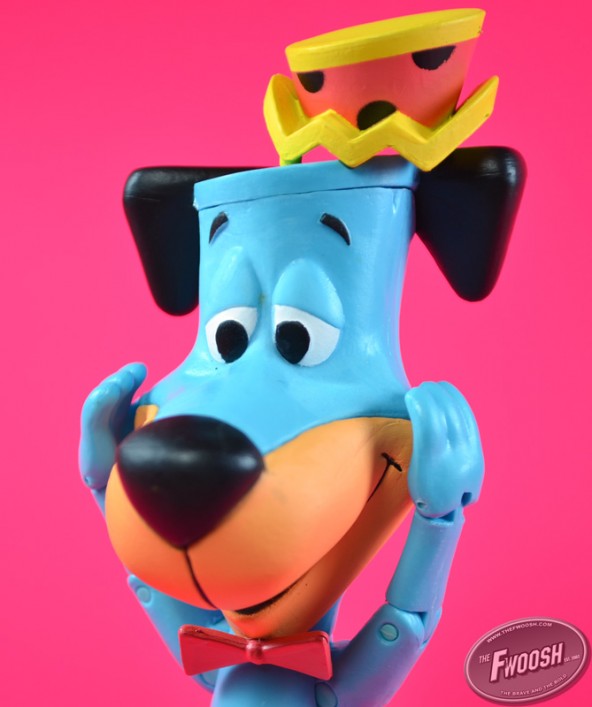 Articulation on this figure is a tricky spot for me, and I think it is almost more painful to deal with since it is actually really, really close to being great. I will admit it–these figures actually have more articulation than what I was expecting. I really appreciate things like hinged wrists and ankles, but both HH and HKP are dying–DYING–for biceps swivels. Arg! The poses that are made possible by the tiniest point of articulation inclusion are massive and both of these figures miss them greatly. I do like what I can get with the articulation that is there, but the swivels would have made all the difference in the world. So much so that I would rather sacrifice the wrist hinges in lieu of a simple cut to the articulation in the biceps. 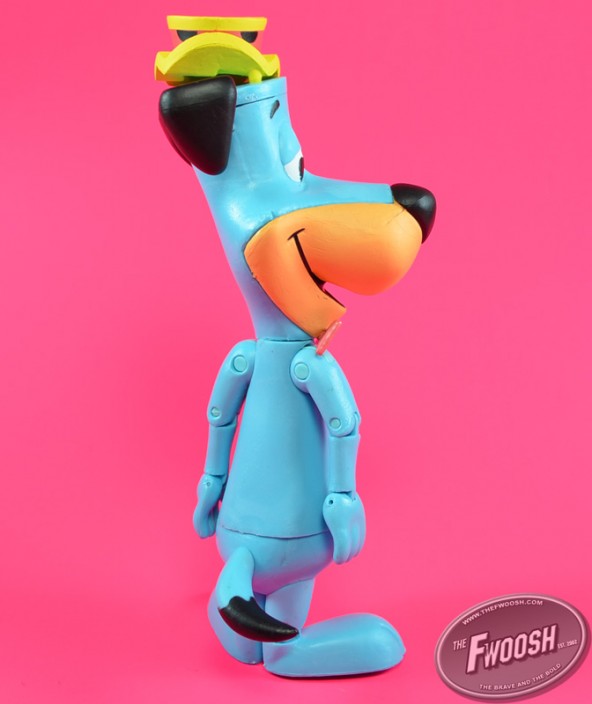 The other area for concern for me, and probably the biggest one overall, is that construction and engineering on these guys. It just, well, needs some work. The biggest issue for me is that the ankle joints are way too weak and these guys are going to be taking constant headers off of the shelf due to the weakness in those important points. Huckleberry Hound is a large and fairly heavy chunk of plastic and he just has way too much mass to be supported by weak ankle cuts. I would much rather not have the point or go for something a bit more limited (like just a side to side swivel) since, as it is, it is more of a hindrance than anything else. I will make this plea: Jazwares, please get the engineering in the articulation on this line sewn up, or please consider different points/types of articulation. I love movement in my figures and I appreciate the thought, but it is frustrating when articulation can change the overall quality of a figure. Finally, and this is just a weird thing with Huckleberry Hound in particular, but for some reason the very top of his head (and ears) is removable. I have no idea why this is the case, but I am guessing that it is just a part that was supposed to be glued down but wasn’t, but I am not sure why it was that in the first place. He needs some Frankenstein-like stitches along his brow to keep his lid on. 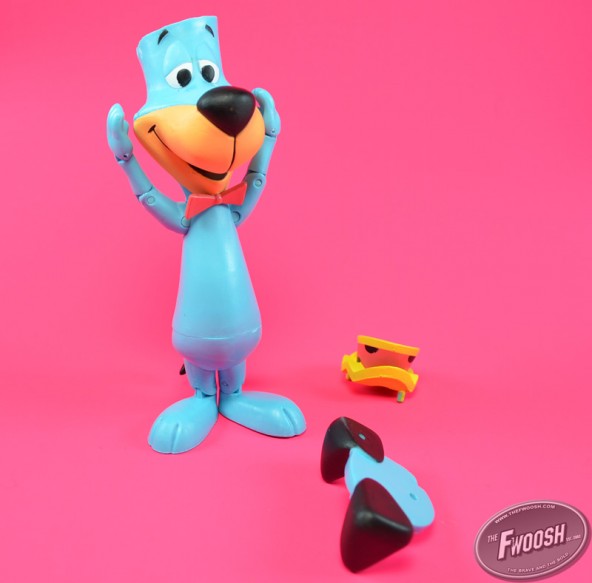 Honk Kong Phooey is about the same in terms of overall execution as Huckleberry Hound with a couple exceptions. Like HH, I like the sculpt and it does capture the classic feel of the character, and since he is such a hilarious character, the look is a lot of fun. I do admit that I wish a different direction was taken with his eyes because he looks a little, um, under the influence? I realize that it is a creative choice and I don’t *hate* the expression, but I would have actually preferred a more neutral expression. The paint is also a concern and probably more so with HKP than Huckleberry. He has white paint against the red-orange in his robe and mine is pretty clean, but I would watch out when picking yours off the peg.
He also shares most of the same articulation and construction issues with Huckleberry Hound. He has very weak ankle joints, so he has already started tumbling and it is exacerbated by his hips, which are just as weak, I am afraid. He is also lacking the biceps swivels and since Phooey is known for, you know, chopping stuff, it is near maddening that you cannot position him kung-fuing style in a very convincing fashion. As you can see in the pictures, you can make it work with the right angle and setup, but the simple mid-arm cuts would have made all the difference in the world. 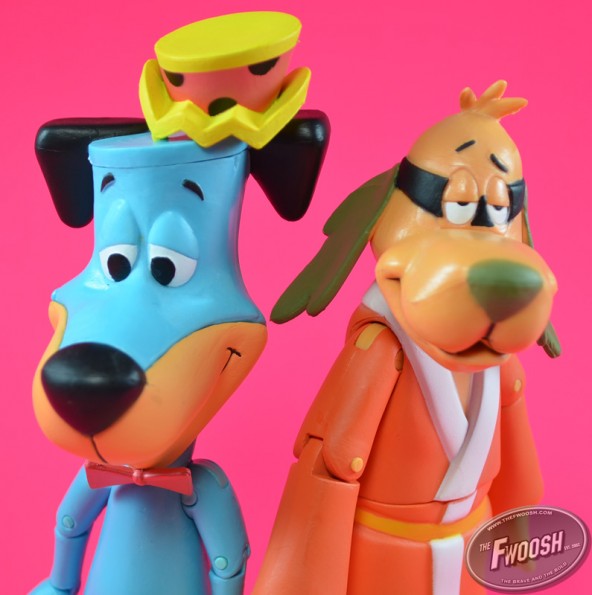 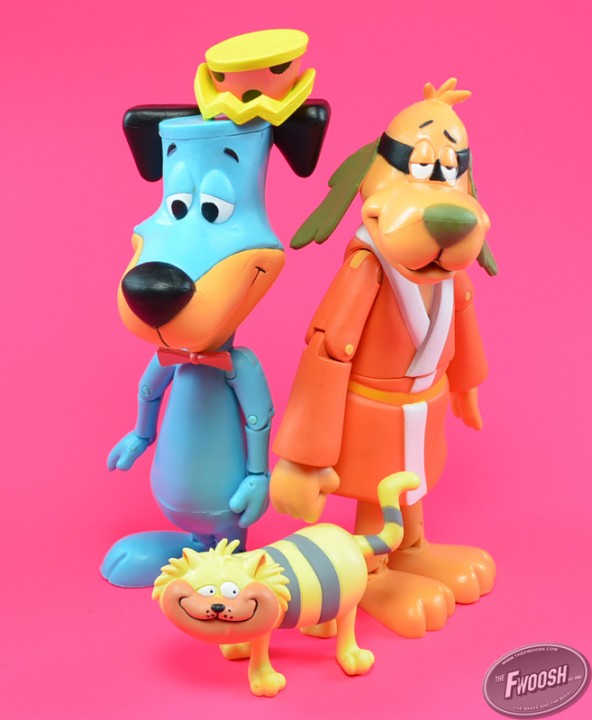 One thing that Hong Kong Phooey has going for him ahead of Huckleberry is that he does have a little pack-in with him in the form of his cat buddy Spot. You know, the one with stripes. Ha! This little slug figure is actually very, very well done and so much so that I *might* go back and pick up Space Ghost if I see him again just for the Blip figure. The sculpt is very nice, and the paint is actually the most solid of any of the figures, and since it is a slug (i.e. not articulated) there are no weak points to get in the way. I hope that future figures will enjoy character appropriate pack-ins, they certainly add to the overall value and when they are not there, like in the case of Huckleberry Hound’s banjo, they really feel like they are missing. 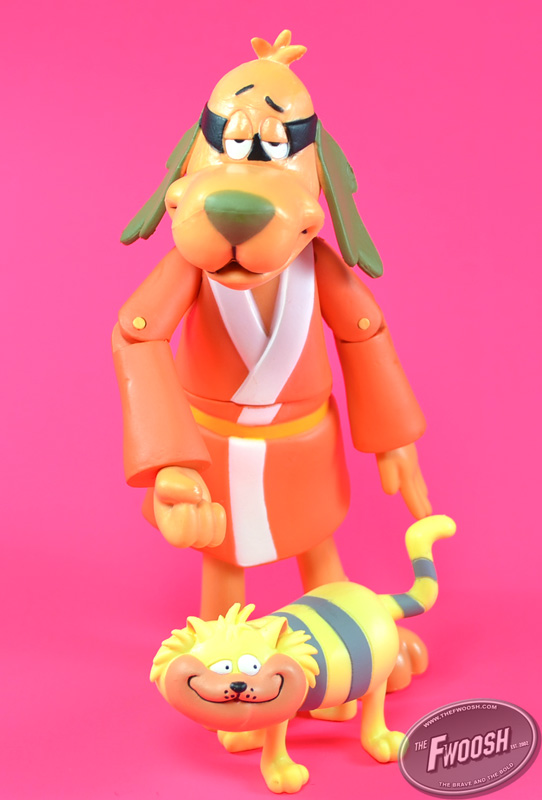 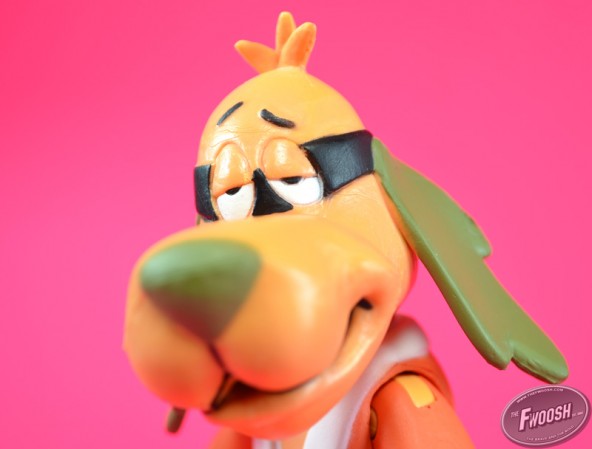 I am very happy that a company has decided to give a great property like Hanna Barbera an action figure push. There are tons and tons of characters that l hope to see in the six-inch line like Yogi, Secret Squirrel, Grape Ape, and others. More so, though, I hope that Jazwares can get their engineering and QC down because I do think that with a few important adjustments, this could be a really fun line. I was considering getting a few of the smaller scale items as well, but I am going to pass because I would want them to be really good. I might still get the smaller Jerry figure so that he is more in scale with the larger Tom, if I ever see either of them. These are currently hitting Toys R Us stores, and I would strongly recommend finding them on the pegs so you can pick out the best paint applications.